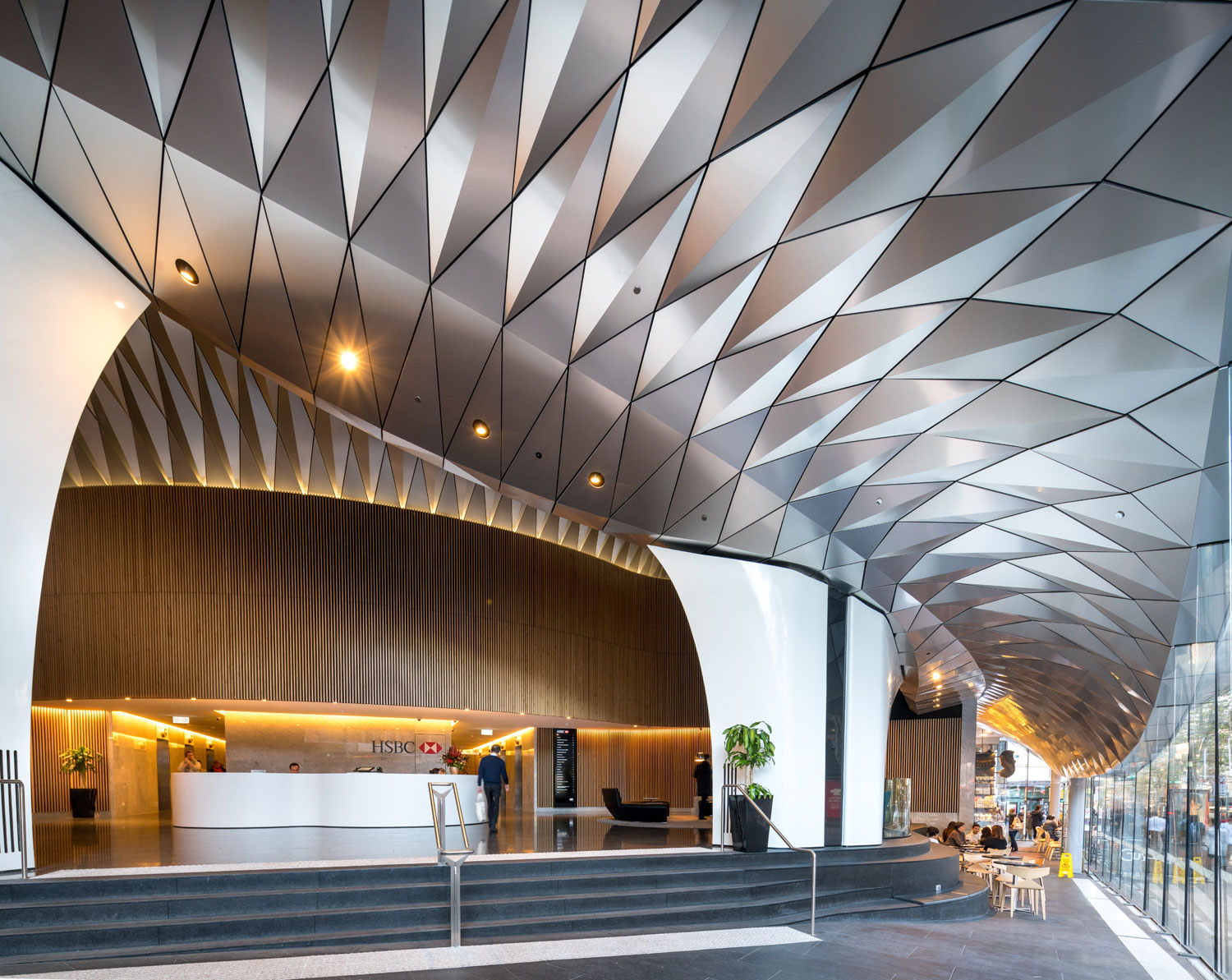 On a busy intersection in Sydney, Australia, you’ll find the 580 George Street Lobby, enticing passersby with its captivating design. The lobby’s upgrade is inspiring, utilizing the expertise of the geometry specialists at AR-MA in collaboration with architects fjmt (francis-jones morehen thorp) studio. The architects at fjmt explain, “We have sought to reinterpret the typical Sydney street awning to one that is dynamic and responsive to its urban context.” 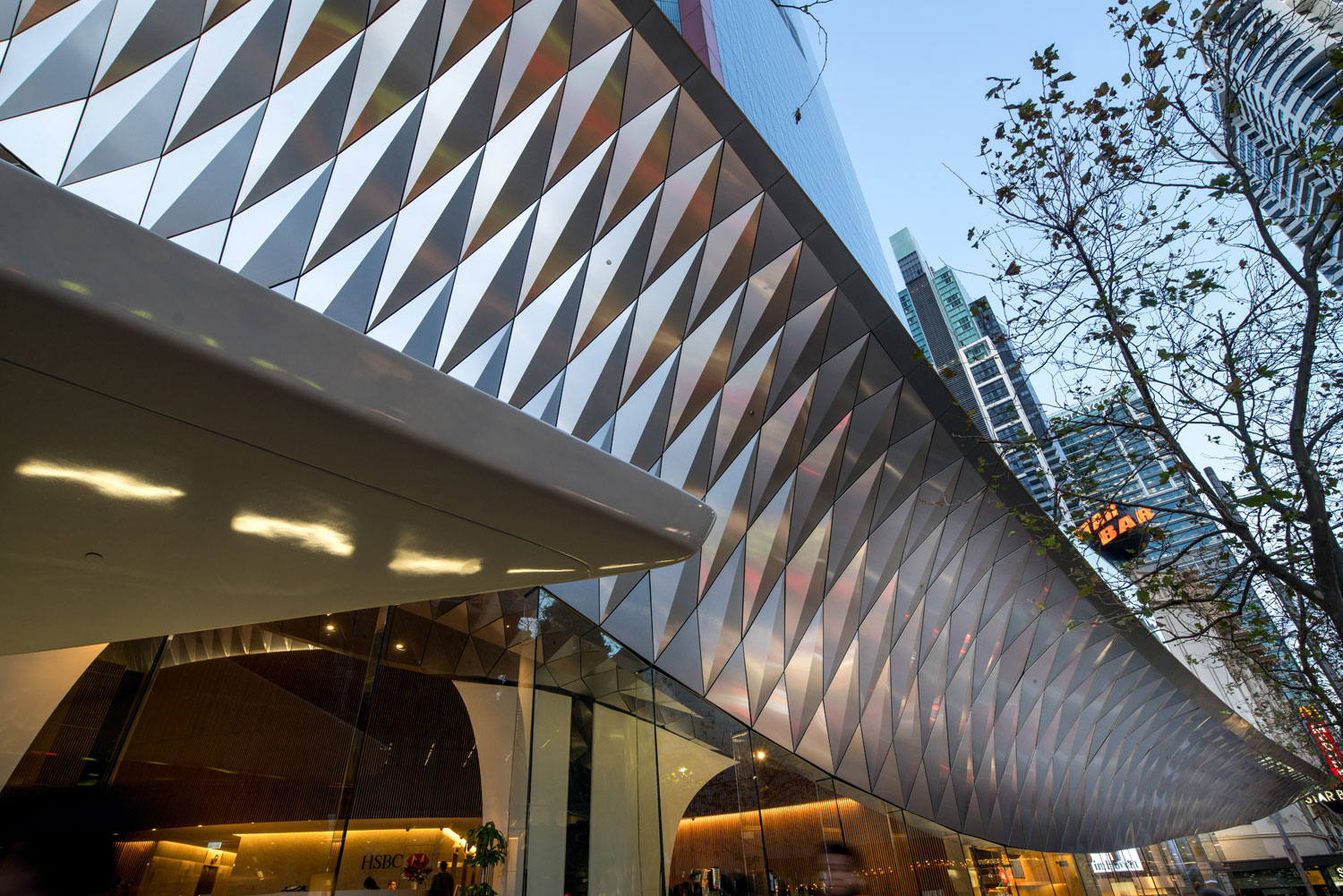 In the lobby space of a commercial high rise, the HSBC centre features a fluid external canopy that makes its way through the interior of the lobby. Its fluidity was purposeful, wanting to blur the lines between where the street ends and the lobby begins. 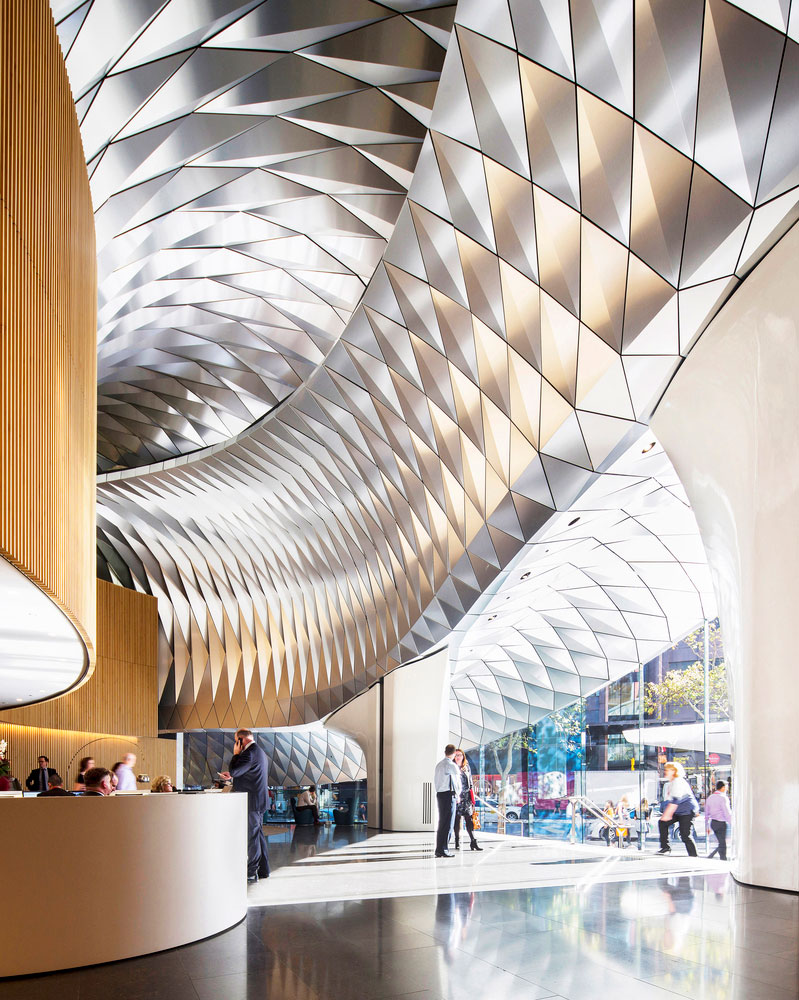 The serpentine form is composed of Alucobond PLUS naturAL Brushed composite material (ACM) fabricated in a series of diamond shapes.

Fjmt describes, “We selected Alucobond PLUS brushed aluminum, a rigid, yet flexible façade material for the diamond shaped panels, each unique in their form, for it’s reflective characteristics which respond to site conditions and complements the design concept of shadow and light.” 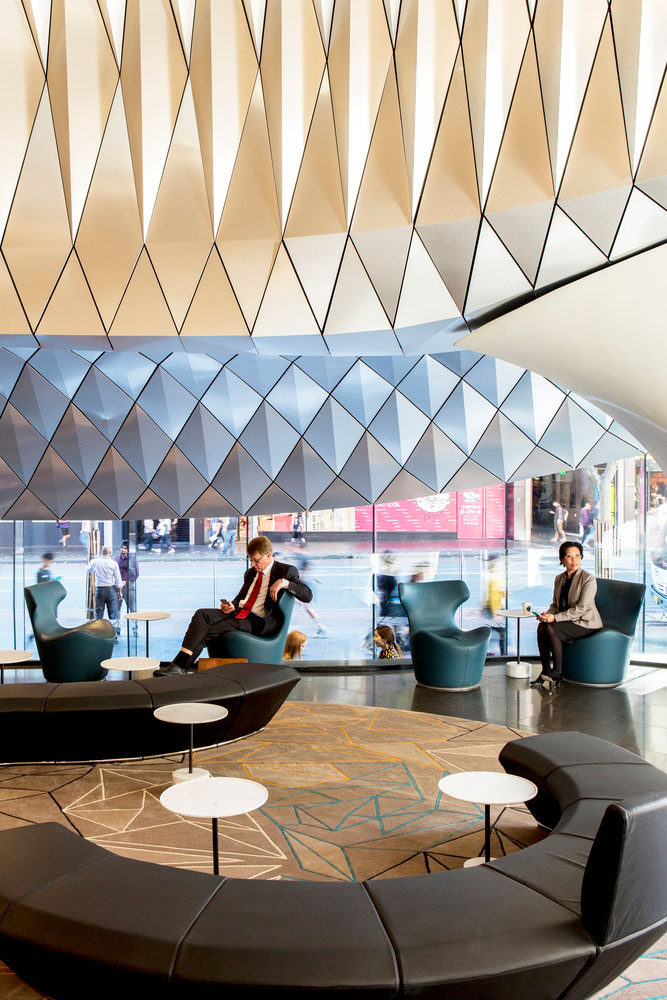 The brushed aluminum reflects both natural and artificial light, offering a unique experience throughout the day. The design, like viewing the underbelly of a reptile, towers above the building’s guests. 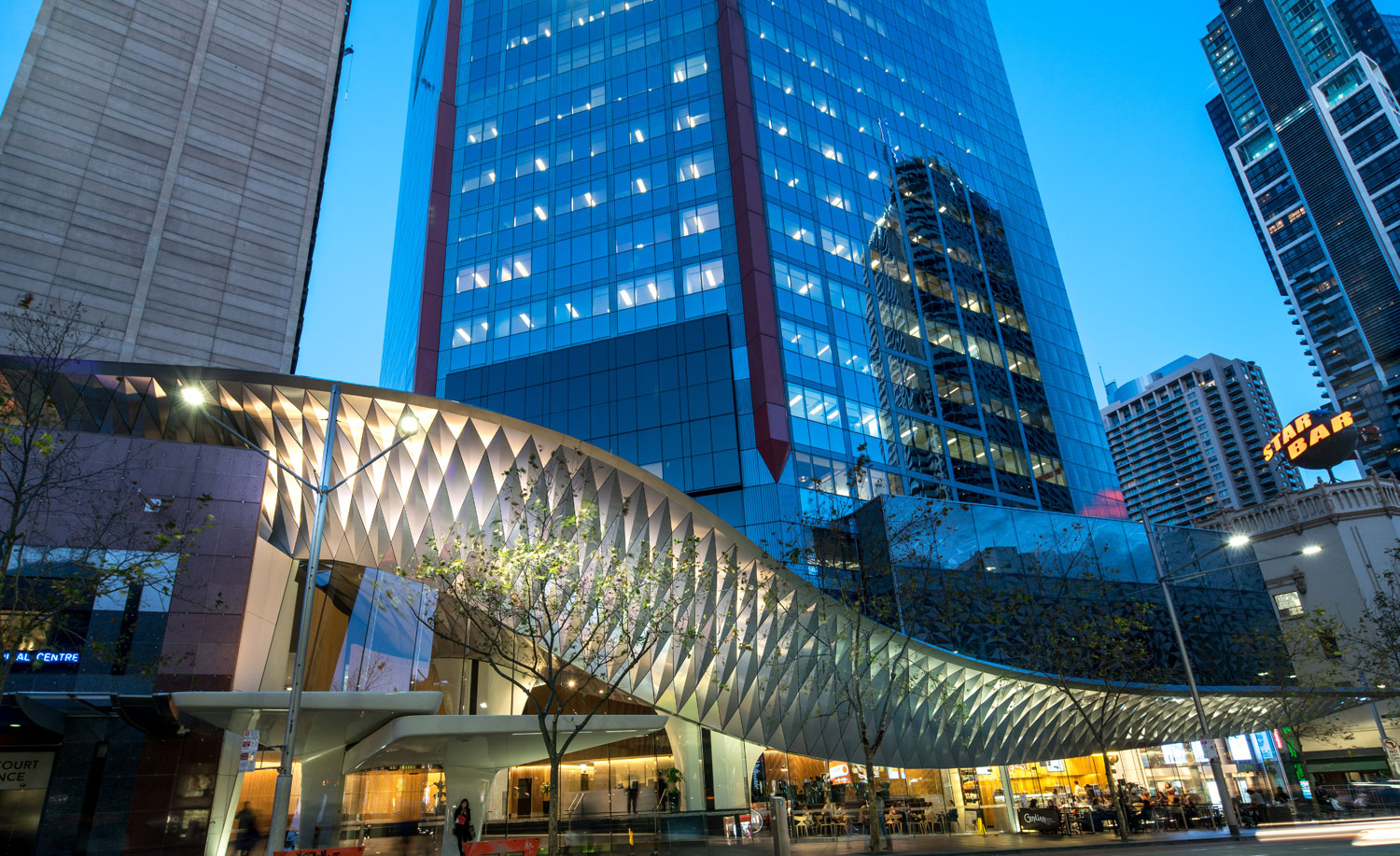 The architects describe, “It is an organic architecture assembled from a series of folded aluminum diamonds that wrap the existing building and the street into a new interlocking space. The distinctions between sculptural artwork and architectural elements of colonnade, awning and façade are blurred to create a new dynamic identity.” 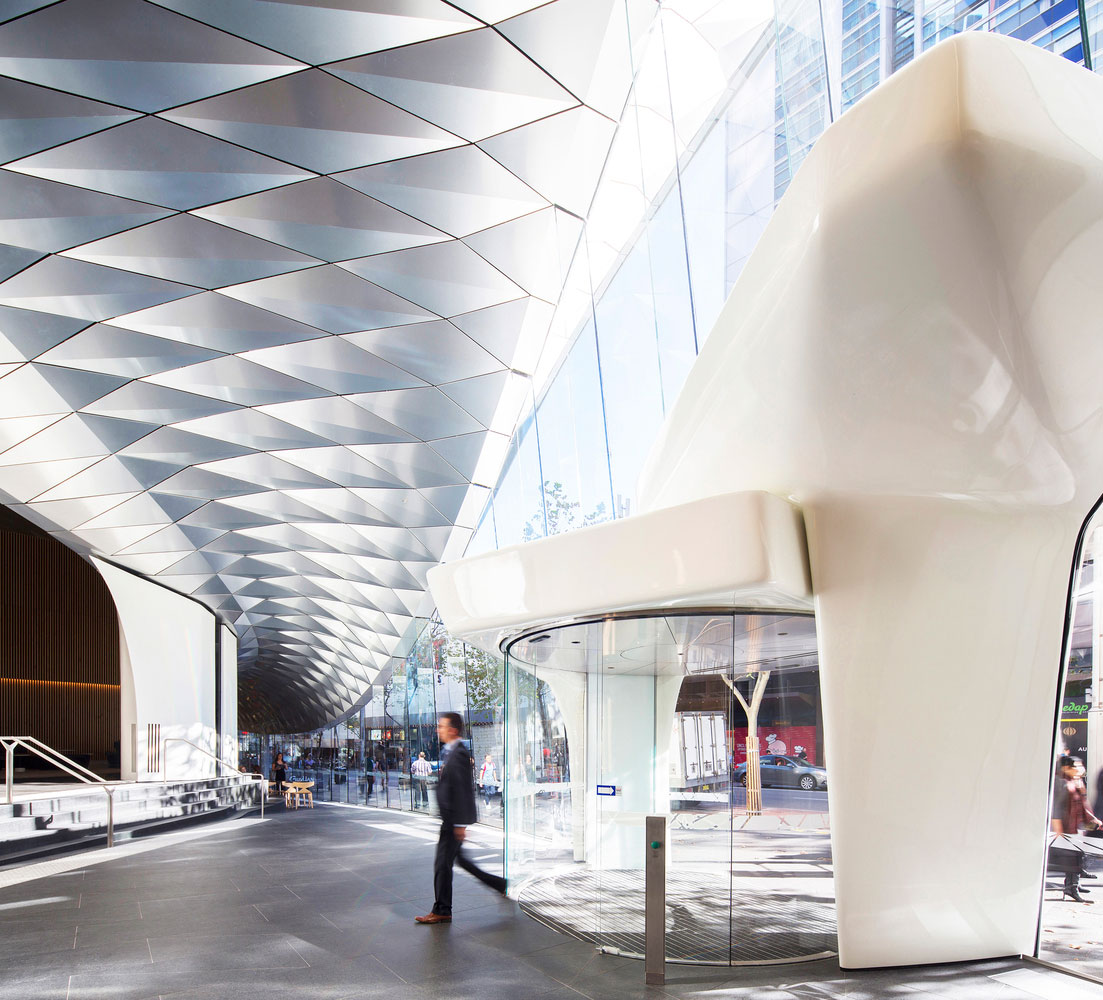 Although the interior features a series of contemporary design elements from its geometric carpeting to its modern furniture upgrades, it is the wooden screening that offers the space its most contrasted element to the metal ceiling. Reflective white bulbous columns and curvaceous grey seating play equally important roles in creating this truly fascinating design. 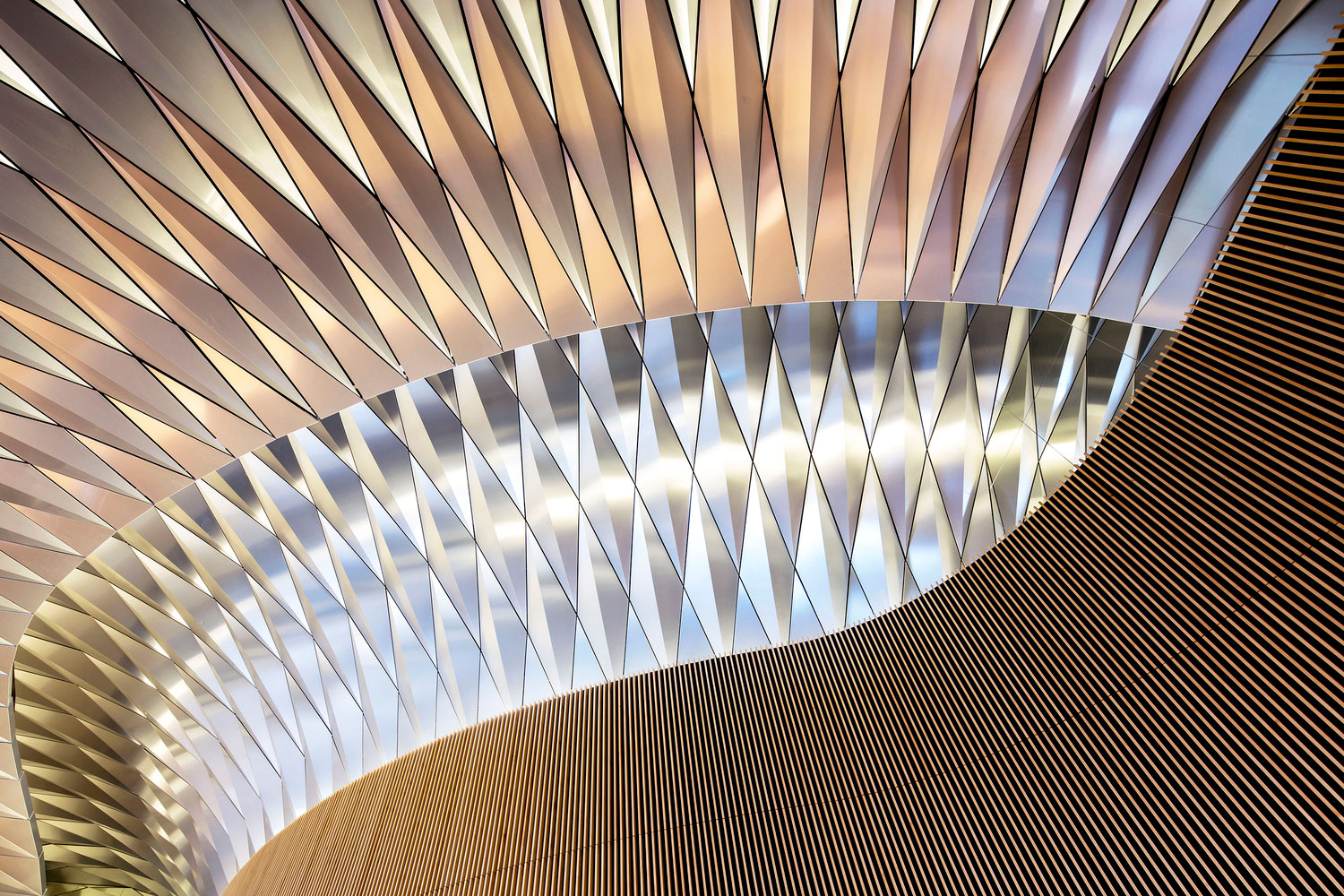 The project, both viewed from the exterior through the interior, is a contemporary form that takes full advantage of natural light and space. Its voluptuous awning is meant to entice the area’s inhabitants and offers another example of the critical importance initiative design has on our lives.