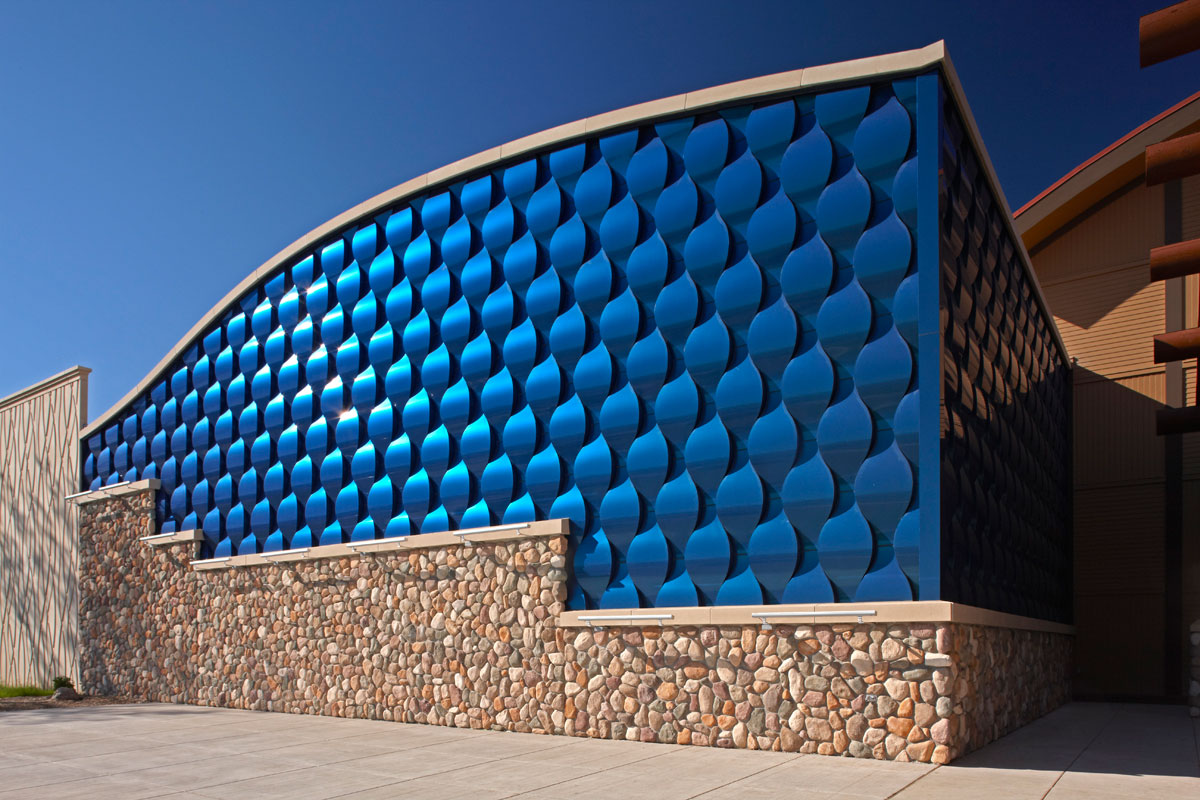 Architectural design of the newly opened Seven Clans Casinos Red Lake followed the wishes of community elders of the Red Lake Band of Chippewa Indians who own and operate this casino-hotel complex located  in north-central Minnesota on the reservation’s southern edge.  They wanted the facility’s design to respect tribal heritage but also to exude an atmosphere of fun and relaxation. 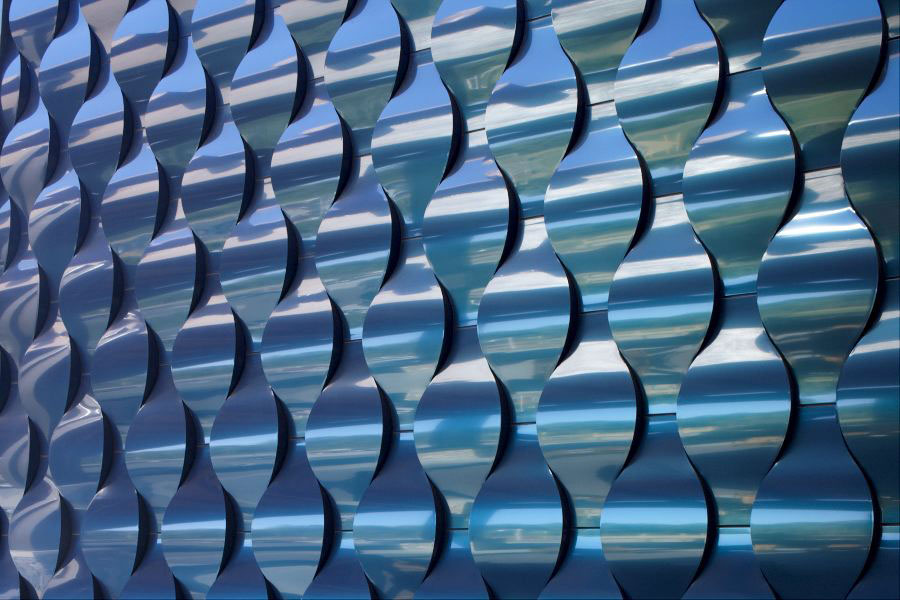 “They wanted to create a first-class facility that had a north woods flavor with contemporary elements in order to improve their gaming image,” according to Erik C. Wedge, AIA, NCARB, LEED AP, partner, DSGW Architects, who said the new casino was designed to replace the gaming facility that had been incorporated into the Red Lake Humanities Center.

The $21-million 65,840 square-foot Seven Clans Casinos Red Lake complex was designed to celebrate the area’s woodlands culture in which the lake itself plays a major role.  So, not only did Wedge incorporate wood and stone in the building design but rippling images of the shimmering blue lake.

“Red Lake is very culturally important to the heritage of the Red Lake Nation,” said Wedge, who recreated the water effect in exterior cladding with an intricate pattern of hourglass shapes formed with Alucobond ACM in the Spectra Ocean color. A total of 3,250 square feet of Alucobond Spectra Ocean in the 4mm thickness was installed at Seven Clans Casino Red Lake. 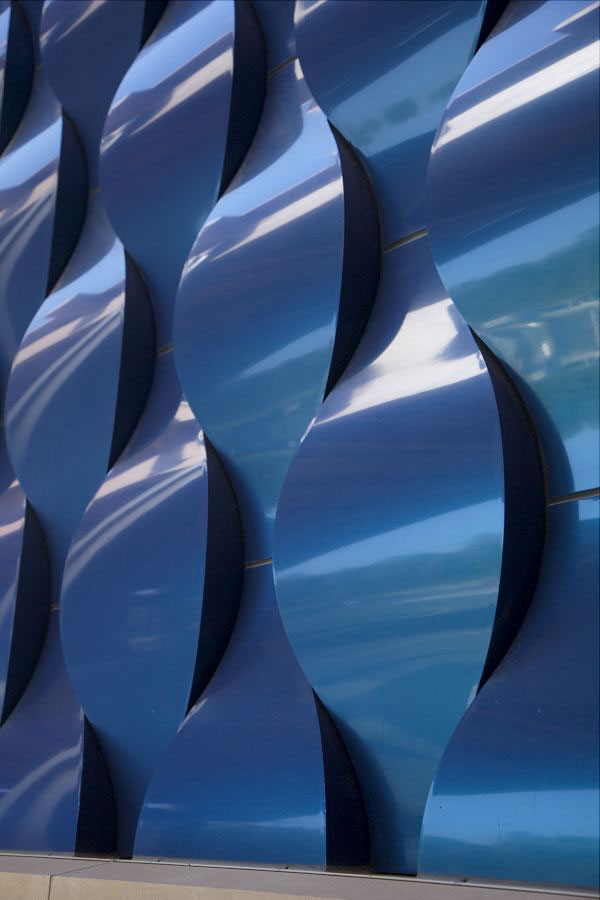 “The Alucobond Spectra is a very eye-catching material that could be shaped into a form that appears to undulate,” said Wedge.  “Different colors are viewed from different angles.  The color scheme ranges from blue to green.  It really does seem to shimmer like the lake.  We couldn’t have gotten this effect from any other product on the market. We wanted to recreate the shimmer of the lake on a bright, sunny day.”
At night, the Spectra Ocean exterior panels produce a unique, eye-catching effect when bathed in a state-of-the-art LED lighting system that changes colors. 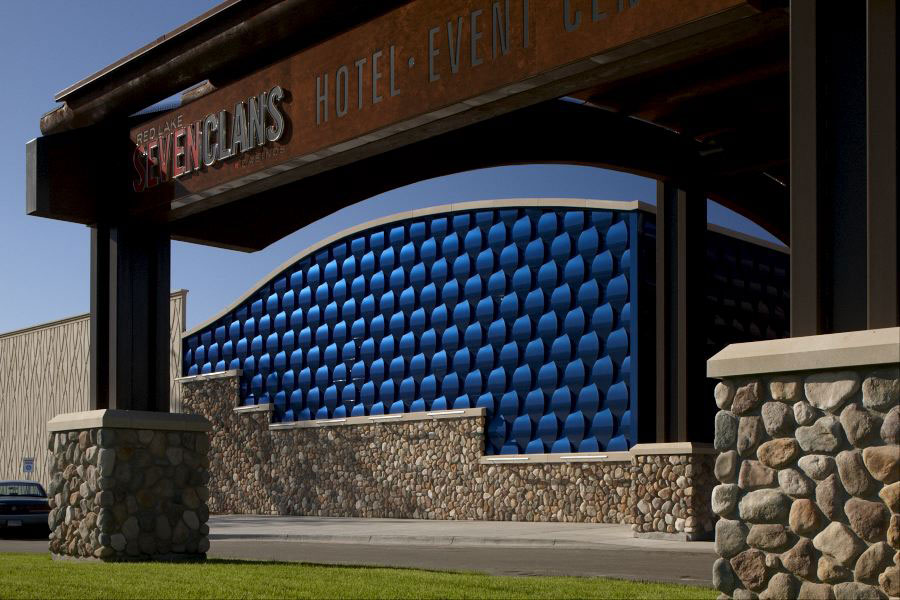 “With the material’s reflective qualities and the design of the panels, you get the impression of the moon shimmering off of the lake at night,” said Brenny.  “There’s no other casino or business in this area like it. The Alucobond is well-made and the installation looks outstanding. The wave pattern creates a very unique appearance.”

“There’s a progression with the material,” said Wedge.  “When visitors are on Highway 89, they see the Alucobond.  It gives them a transition from outside to inside.  The Alucobond serves as an exterior focal point.  In the lobby, it’s a focal point behind the hotel desk and above the gift shop.  There’s one consistent material – the Alucobond.  It draws the eye to it.” 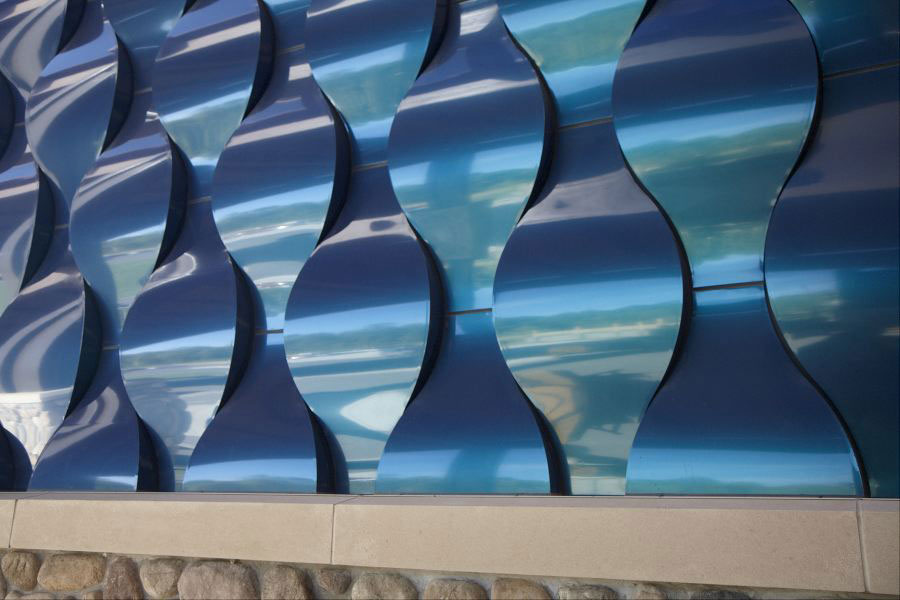 Atomic Architectural Sheet Metal, Inc., of Vadnais Heights, Minn., both fabricated the Alucobond Spectra material and installed it in a route and return wet-seal method.

“The face of these panels has a compound radius as well as the sides; we heat welded-them together,” said Schmitz. “An aluminum attachment system was fastened to the panels so we could create a running bond-type pattern.”
The new Seven Clans Casinos Red Lake complex – which includes a 40-room hotel, gift shop, two restaurants and a conference center – celebrated a soft opening Dec. 23, 2009, with its grand opening in January. The gaming hall features 310 slot machines, four black jack tables and two poker tables.

The Alucobond Spectra exterior cladding has held up well in the northern Minnesota winter, according to Wedge. “The Alucobond has performed very well,” said Wedge.  “It’s an extremely maintenance-free material.”

Adds Brenny: “There was no piling of snow on the Alucobond.  It didn’t freeze up or discolor. It looks as good as the day it was installed.”
The Alucobond material for this project was promoted by EBP, LLC, of Excelsior, Minn. General contractor for the casino complex was Woodstone Builders, Inc., of  Minneapolis.