Designed to achieve the principles of smart growth – which places a priority on sustainable, mixed-use communities designed to enhance quality of life – Marine Gateway was developed by PCI Developments Corp., of Vancouver, British Columbia, on a one-block former industrial site that is now a new urban town center. 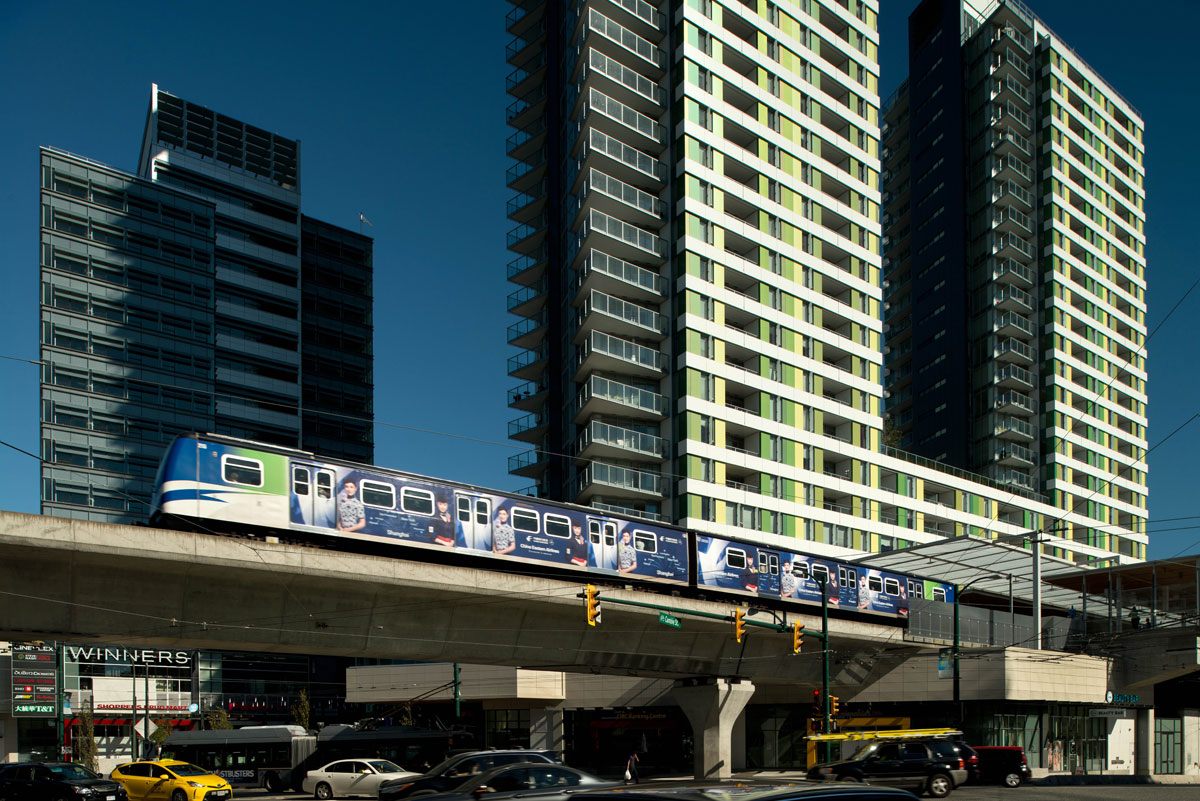 The $372-million 820,000 square-foot Marine Gateway development features two residential towers – one 25-story 140,000-square-foot tower and one 35- story 195,000-square-foot tower – that offer a combined total of 461 market condos and rental apartments. Additionally, the development is home to a 14-story 250,000 square-foot office building and 225,000 square feet of retail space, including a three-story retail podium. Shopping and entertainment/recreation amenities include an 11-screen movie theater, a major fitness center, a supermarket and a strikingly landscaped public area dubbed “High Street” that is lined with retail stores and restaurants. Five stories of underground parking also are featured. 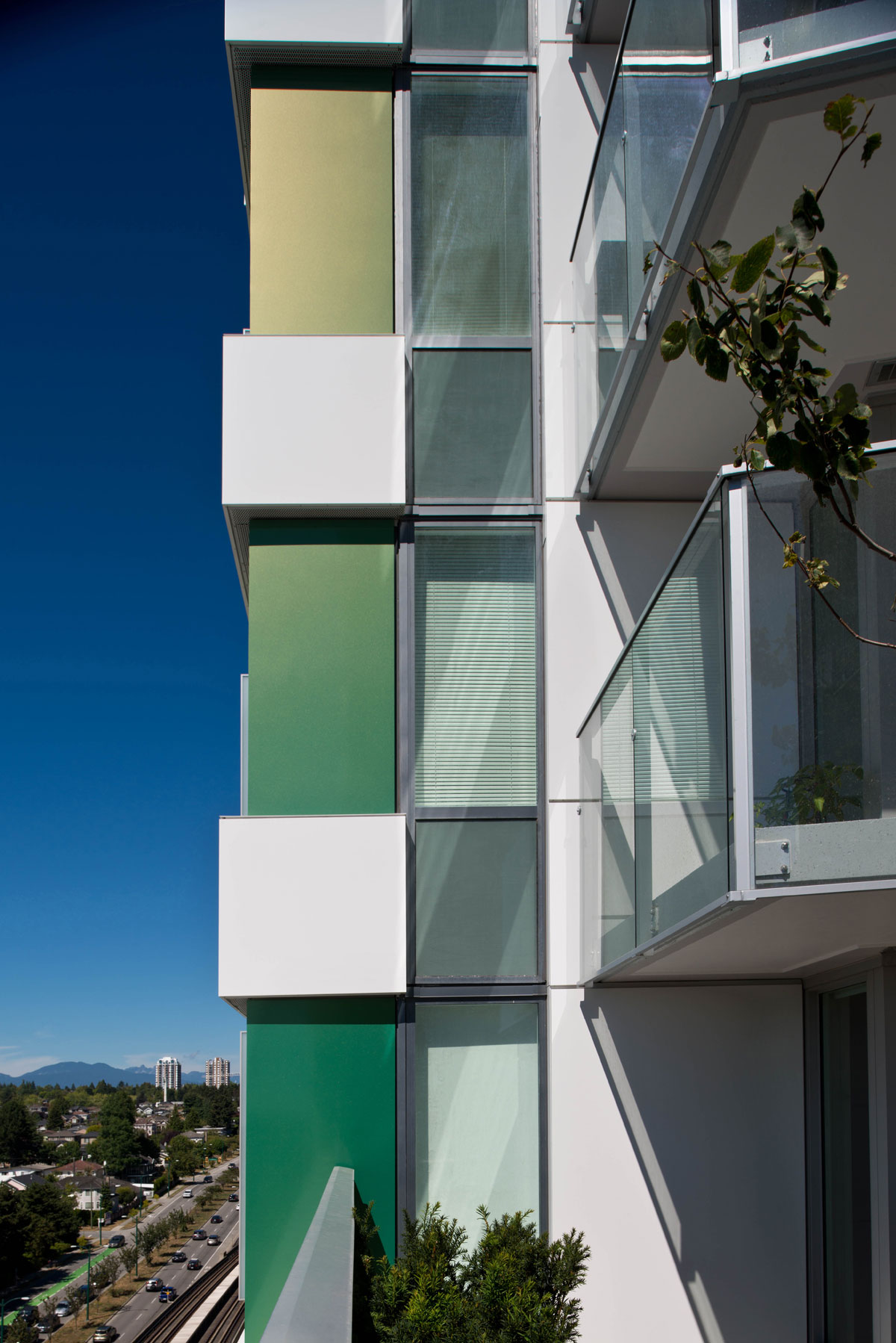 Designed to achieve LEED Gold certification, Marine Gateway features more than 200,000 square feet of recyclable 4mm Alucobond® Plus aluminum composite material (ACM) by 3A Composites USA installed as both exterior building cladding and storefront shoppers and as interior wall accents and trim. Recyclable Alucobond – which is manufactured with both post-manufacturing and post-consumer content – contributes LEED credits to building projects. 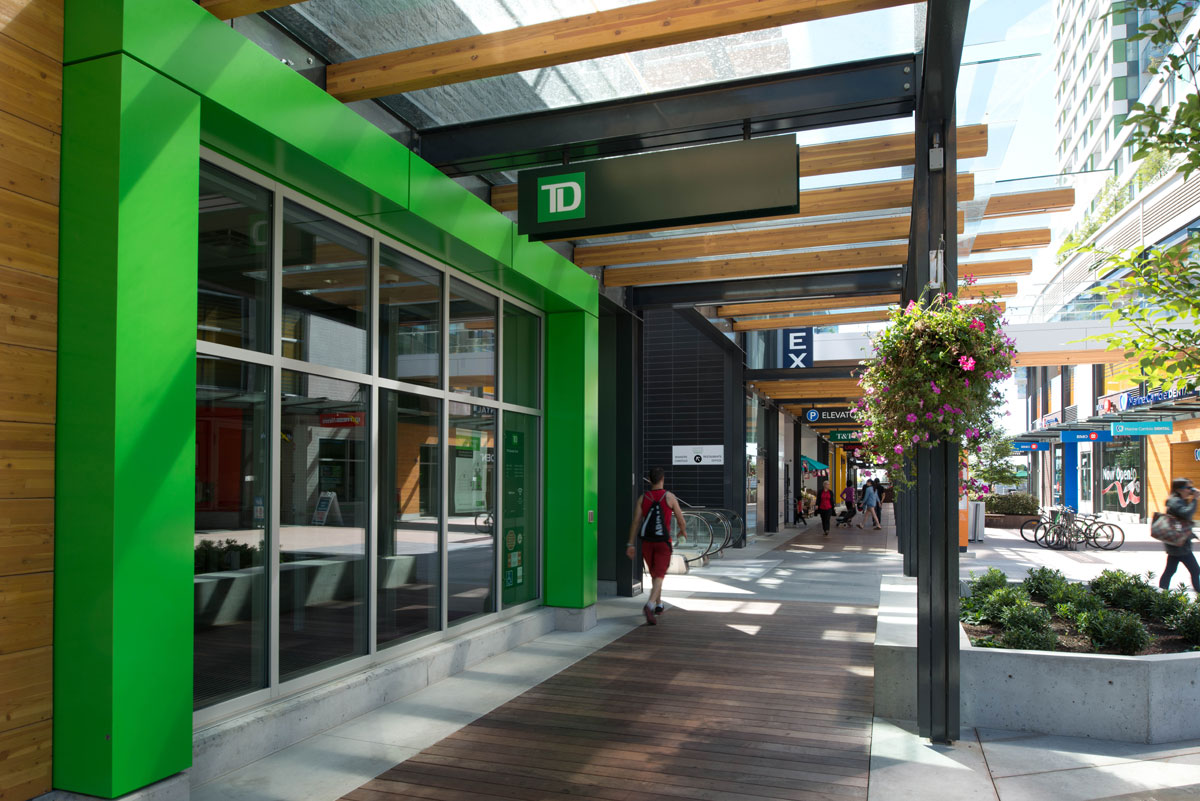 The Alucobond Spectra Colors finishing system was introduced by 3A Composites USA to allow architects to incorporate a unique, ever-changing color spectrum in building cladding. Alucobond Spectra panels change colors as different wavelengths of light are reflected back to the audience, depending upon the viewing angle.

“We wanted to ensure the public realm and architectural elements were well-designed and visually interesting, with a variety of materials, textures and color,” said Grant. “In particular, the distinct use of color on the high-profile residential towers, the retail High Street and within the residential lobbies has created a colorful, dynamic and identifiable ‘Marine Gateway’ look that is warm and inviting.” 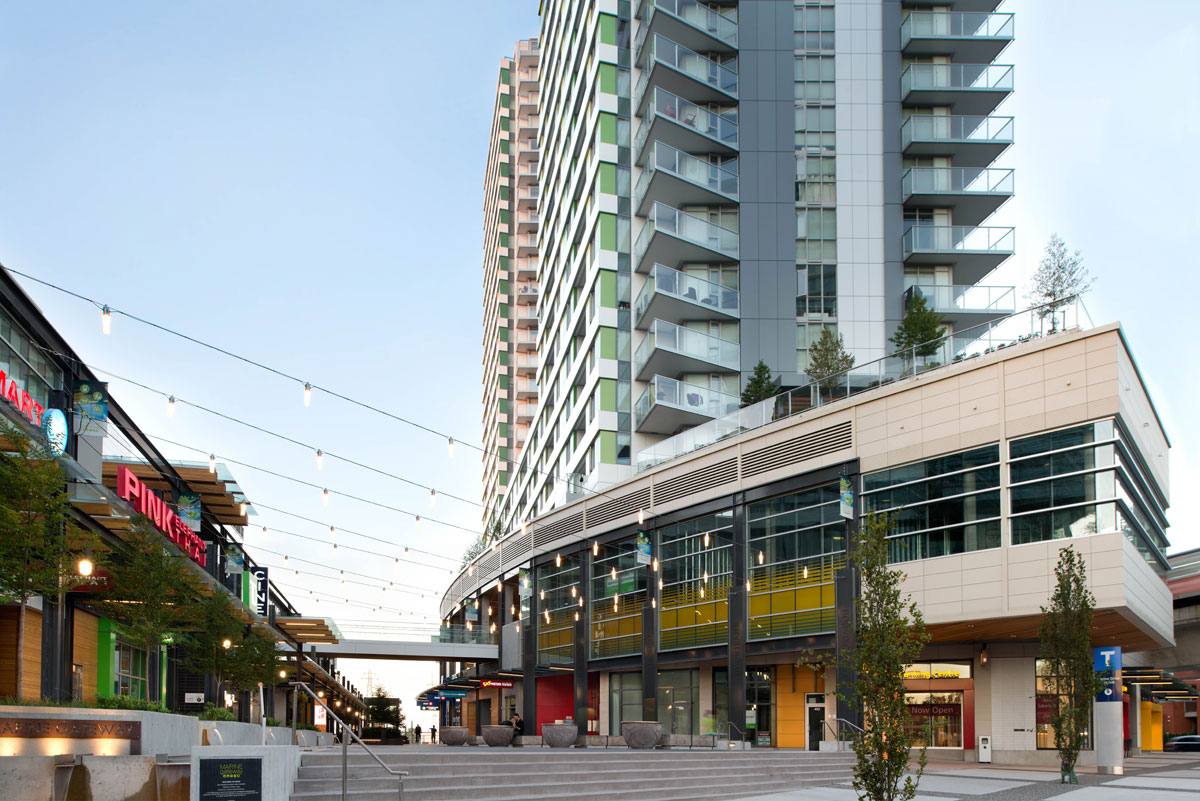 The pedestrian High Street distinguishes itself from other retail/entertainment districts, according to Bragg, with its attention to architectural detail, vibrant colors and quality materials, including Alucobond Plus panels, wood, brick and terra cotta within steel frames. The office tower is designed with a more restrained articulated curtainwall and Custom Ridgedale Silver Alucobond Plus panels, while the residential towers feature a unique subtly changing color palette achieved with Alucobond Spectra cladding.

“We wanted a simple, calm palette for the residential towers,” said Bragg. “While we originally thought about incorporating painted glass panels, that material was not cost-effective. We did, however, want a fresh feel for the towers and a material that would change in appearance throughout the day. So, we looked at Alucobond Spectra.”

“We wanted to create a fresh look with rather timely colors,” said Bragg. “We knew that the Spectra would change in a subtle way while providing contrast with the bone white Alucobond panels. We always thought that the Spectra would appear to change more from a distance rather than close up. But, within residents’ units, you can catch the change. …The Spectra is a very interesting material. It’s been very successful in capturing the look we were trying to achieve.” 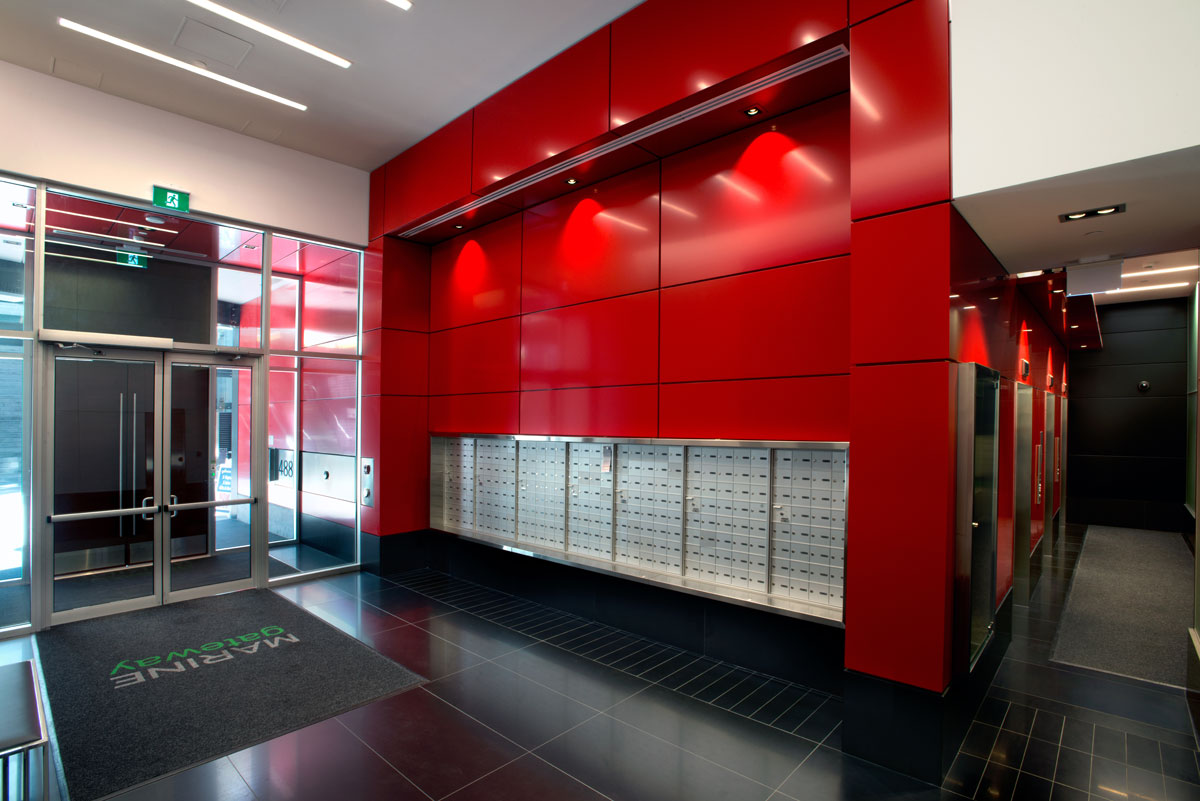 (In addition to exterior cladding, Alucobond in the custom Spectra Lime Zest color was uniquely installed as accent wall fascia illuminated with LED lights in residential lobbies. Residents’ mailbox and entry buzzer areas are highlighted with Alucobond Plus accents in Red Fire and Focus Black.)

“The Marine Gateway towers are designed with a much more solid wall, which speaks to the buildings’ sustainability and changing codes,” said Bragg. “These are high-performance buildings featuring solid walls and well-placed windows. … Window walls don’t perform as well. We wanted to better insulate the Marine Gateway towers while capturing different views and capitalizing on the changing Spectra colors.” 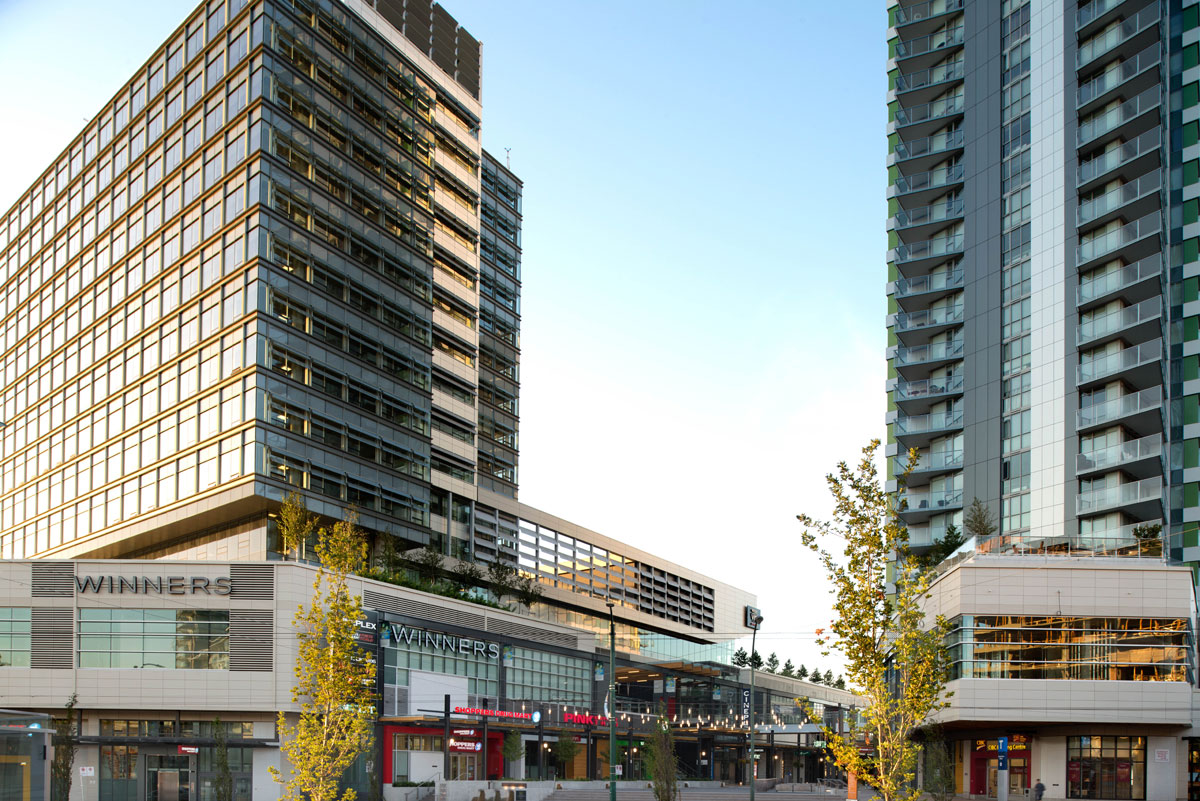 This solid-wall high-performance building design fits well within the City of Vancouver’s goal to be the greenest city in the world by 2020. And, the entire development is a leading example of growth encouraged by the City of Vancouver’s Economic Action Plan, which is designed to help Vancouver grow sustainably with communities, jobs and families in mind.

“As we increase the solidity and opacity of the residence towers, they take on a lot more character,” said Bragg. “They’re not just glazed towers, which makes them interesting in respect to other residence towers within the City of Vancouver. The Marine Gateway towers provide a unique identity for the project.” 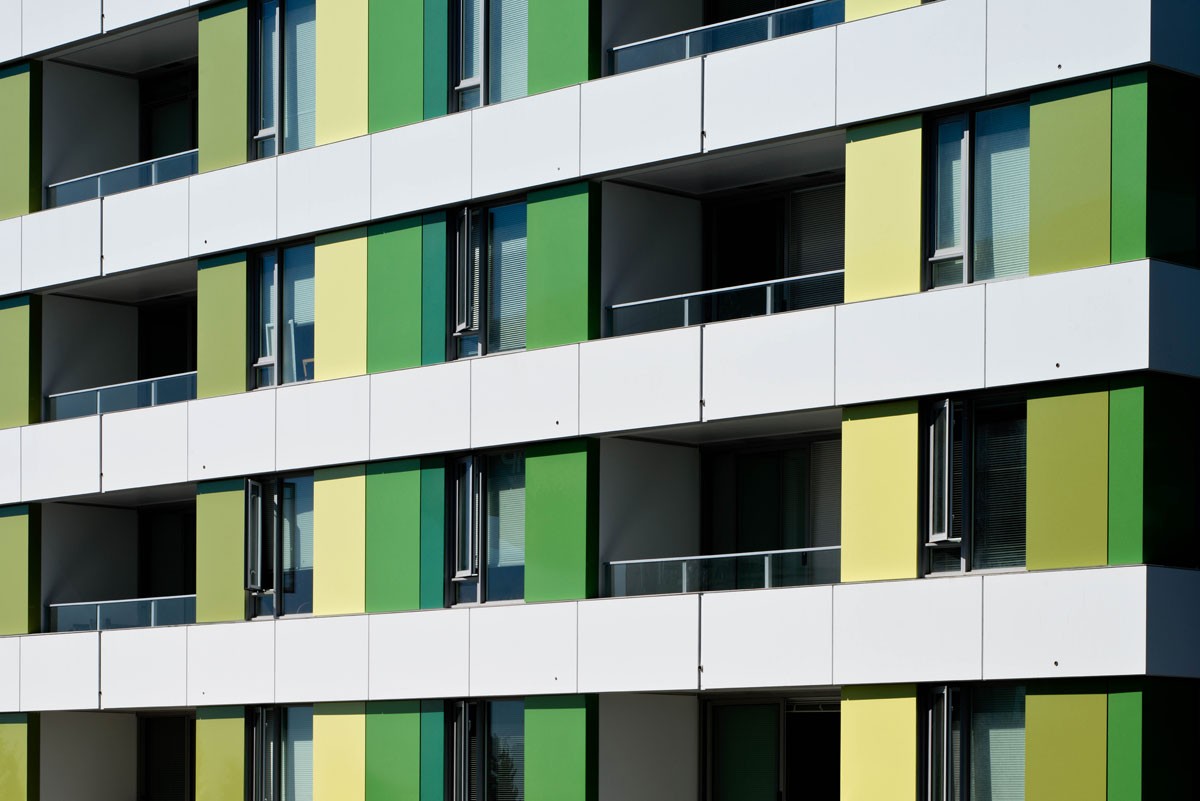 KPS recommended the color-changing Alucobond Spectra panels for the Marine Gateway residential tower as a cost-effective yet striking cladding option.

“Spectra provides the illusion of back-painted glass but is an affordable alternative,” according to Garry Wong, KPS director of operations, who estimated that the selection of Alucobond Spectra over glass resulted in a savings of nearly $1.4 million.

That cladding savings not only helped the project to remain on budget but allowed designers to incorporate “an overall better quality of materials” in the development, according to Bragg.

“We’ve worked with Alucobond for more than 30 years,” said Wong. “It performed well on every level on this project – just as we’ve come to expect. We’re getting a lot of interest in Spectra from this project.” 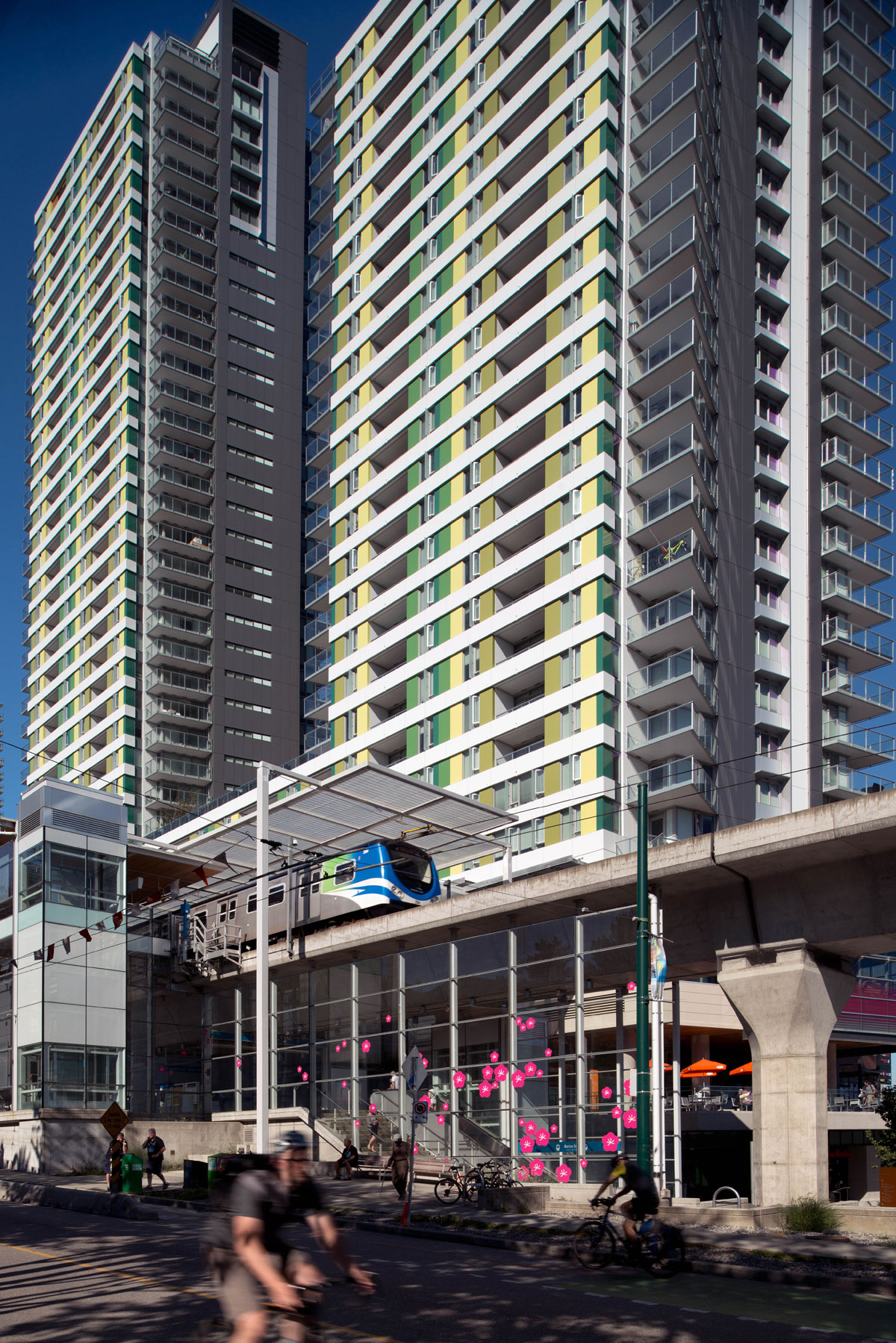 KPS began fabricating the Alucobond panels during the summer of 2014 in a progressive process that coincided with installation, which was completed in 16 months. The greatest challenge KPS faced during Alucobond installation was in accessing the construction site, according to Wong.

“This was a very tight site, and we had to install interfaces on the windows and balconies,” said Wong. “The towers were built adjacent to the rapid transit line, so we had to be careful not to drop any debris that could fall onto the train tracks. That could have shut down the train. We laid down netting to catch any tools that might fall.”

Marine Gateway holds the distinction of being one of the fastest-selling condo projects in Vancouver’s history, according to PCI Developments.

“The towers stand out – looking sleek but colorful and warm – and provide a subtle but refreshing pop of color to the city landscape,” said Grant. “The color change makes it visually interesting and dynamic throughout the day; and, the green remains highly relevant to Marine Gateway as a transit-oriented, mixed-use community. … The Alucobond panels supported differentiation and efficient energy usage with increased cladding as opposed to the predominantly glass towers that have dominated Vancouver’s architecture. The result is a sustainable and architecturally significant and distinct development due, in part, to Alucobond cladding.”