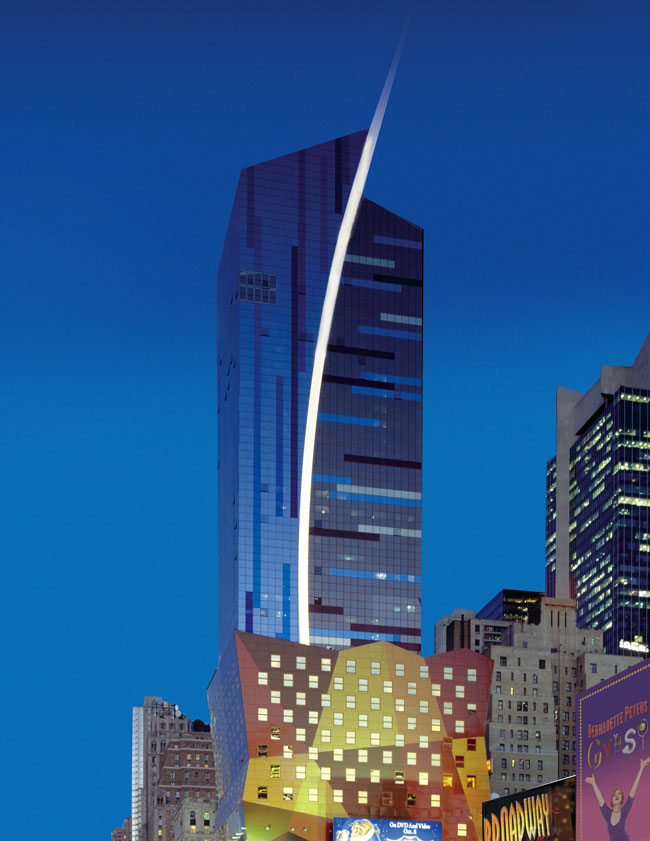 There’s plenty of sparkle in the new Westin New York at Times Square hotel. There’s glass and metal that reflects the bold, imaginative design of the structure itself and the adjacent retail/entertainment complex dubbed E Walk®. This new Westin hotel even illuminates the night with a beam of light that arches through the 45-story glass prism and beyond. The glittering facade on this $300-million project features 8,000 sheets of glass in ten colors.

The shining metal on the low-rise portion of this magnificent structure includes 40,000 sq. ft. of 4mm Alucobond® Plus material in six custom colors of high-gloss fluoropolymer: E Walk® Bronze, Rich Pale Gold, Firelining, Antique Brass, Westin Copper and Antique Westin Copper. Panels were fabricated to be rectangular and run at an angle across the building. A single, fabricated panel may consist of as many as four fabricated panels of different colors.

Two of the four walls of the low-rise portion are sloping. “The only way to achieve this fabrication was to create a 3-D model and do the plotting and cutting with CNC equipment,” said Vlad Sobot of Sobotec Ltd., the Canadian fabricator and distributor.

Panels were applied to the exterior from level 5 (on two elevations) to level 17, and were attached with the Sobotec SL1000 System, a rout & return caulked system. The cladding installer was Permasteelisa, through its sub-contractor Tower Installation. The stud wall to support the Alucobond panels was also engineered by Permasteelisa. Alucobond Plus material is an aluminum composite material (ACM) that consists of two sheets of .02” aluminum bonded to a thermoplastic core. A stainless-steel and red-neon marquee highlight the entrance, along with a carpet of red light and illuminated Westin logos.

Design architect for the project was Arquitectonica; HKS served as production architect. In documenting the evolution of the project, Arquitectonica principal Bernardo Fort-Brescia states, “The challenge was designing a large structure with a multiple use program within the confines of the narrow block in New York.” Arquitectonica studied the evolution of the New York skyscraper “to move forward to a next generation” and studied the history of 42nd Street. “The role of the billboard, the theater marquee and the pedestrian experience were studied.” The studies, that included “the possibilities of introducing a sculptural profile within the rectangular prism,” were discussed in workshops with the developer.

The low-rise portion of the hotel, dubbed the “rock,” is approximately 10 stories “shaped in a jagged rocklike form,” that serves as “mediator between the giant scale of the tower and the familiar scale of the retail podium.” This retail podium was designed by architects D’Agostino Izzo & Quirk of Boston.