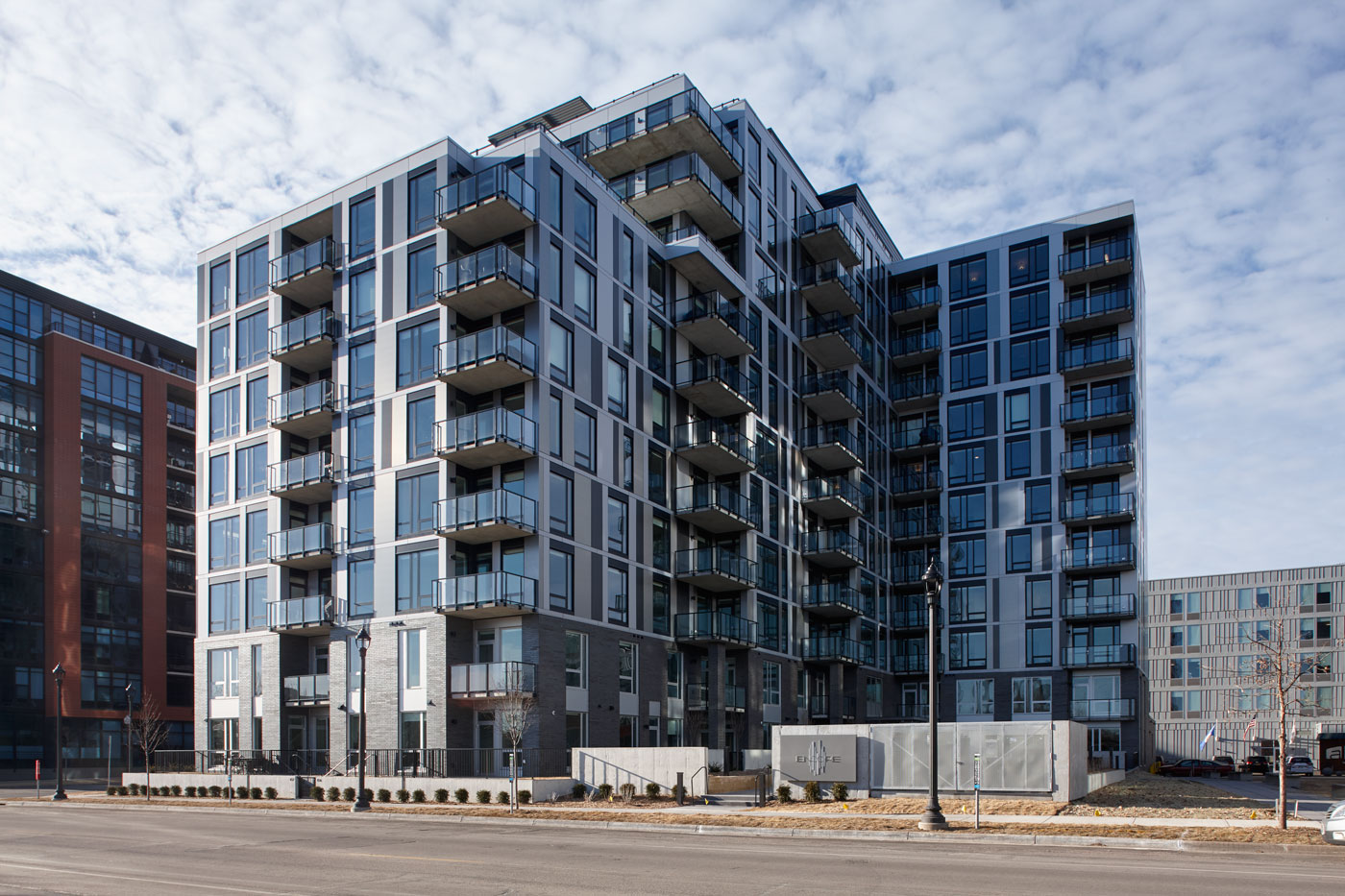 The Encore luxury apartments, which opened in November 2016 in the historic Mill District of Minneapolis, were designed to offer expansive views of both the city and the nearby Mississippi River to residents.

While architects at Minneapolis-headquartered ESG Architecture & Design designed the Encore with an abundance of windows to offer those vistas, they also wanted to minimize their impact on the building’s monolithic, sculptural exterior design. 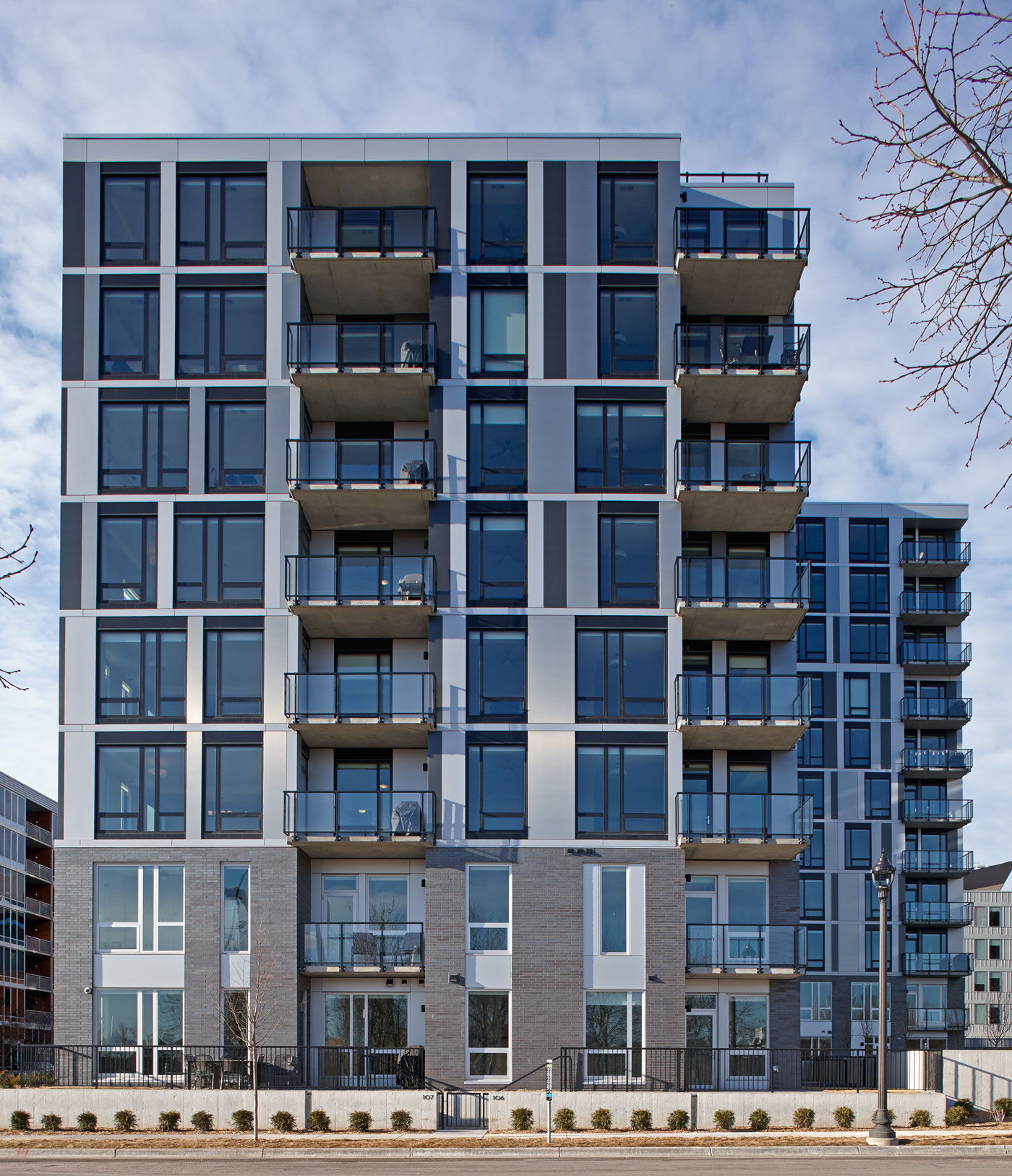 “We didn’t want the windows to appear as just holes in the walls,” said Bob Loken, AIA, LEED AP, partner, ESG.
The resulting unique façade design consists of an overlaid grid pattern filled randomly with a combination of glass windows and Alucobond® Plus aluminum composite material (ACM) by 3A Composites USA.

“Whether the modules are filled with windows or Alucobond panels, the walls and windows seem to blur together,” said Loken. “We’ve de-emphasized the punched-out look of the windows.” 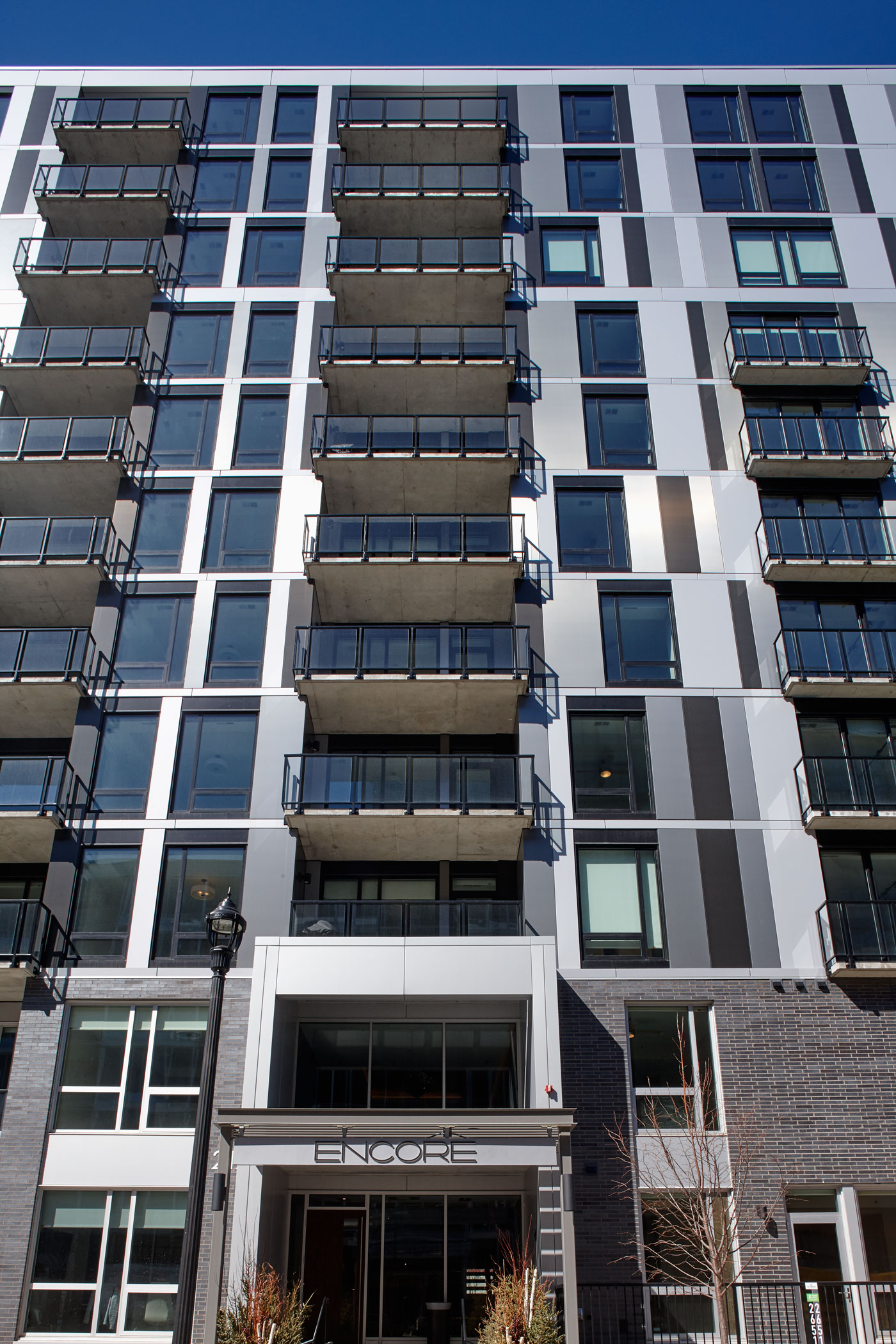 Situated near the Guthrie Theater – one of the nearby cultural institutions that inspired the luxury apartment building’s moniker – the $36-million 12-story Encore features 123 luxury units, including multilevel townhomes with first-story private entrances, nine penthouse homes on the upper floors and a rooftop gathering space. The 175,000-square-foot Encore features a two-story boutique style lobby and is built over three levels of underground parking – the latter totaling 72,000 square feet below grade.

“This is a premiere site,” said Loken. “The views from this building are stunning.” 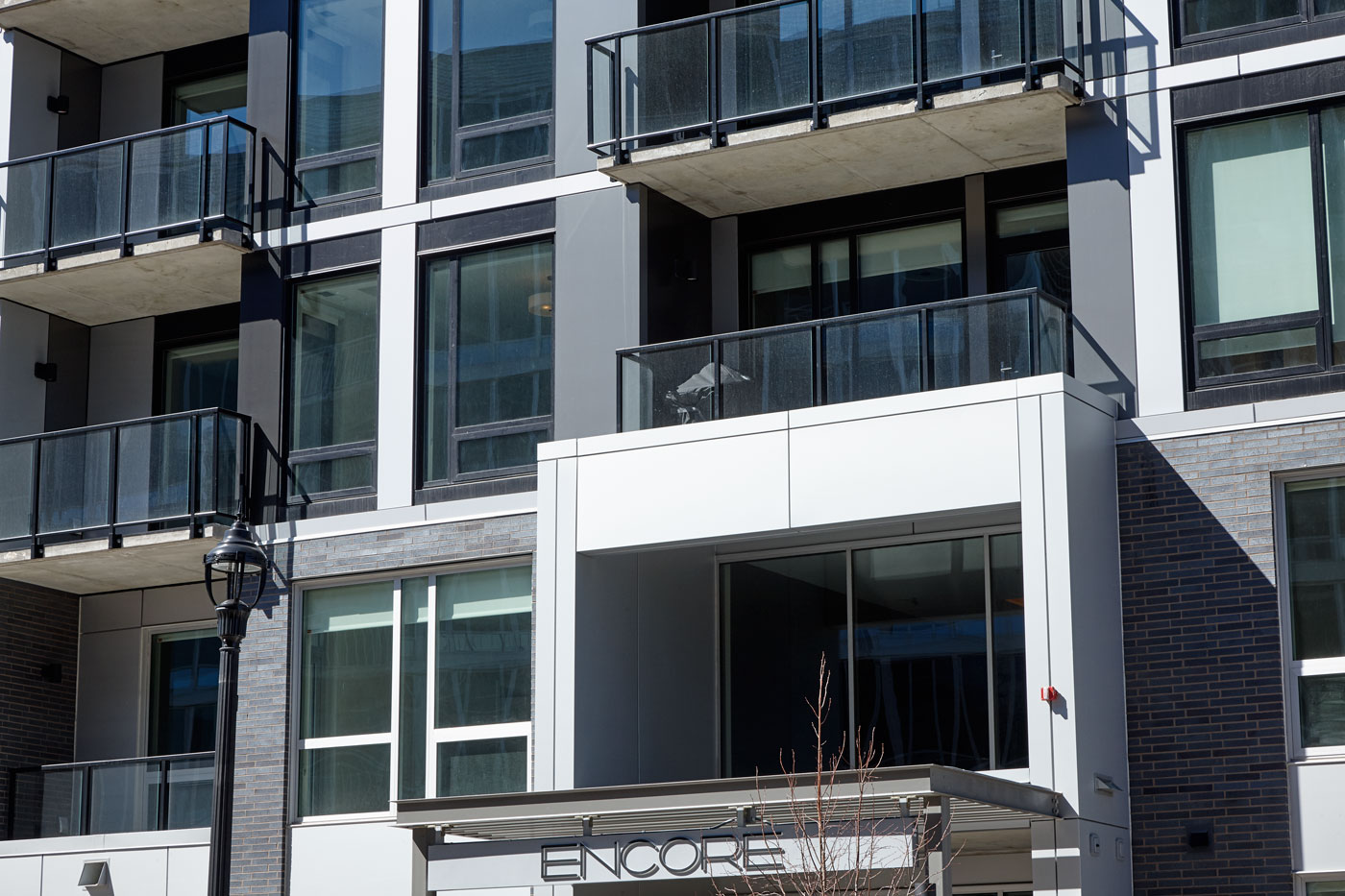 ESG envisioned the Encore as “a sleek, sculptural building” within the context of the Mill District, according to Loken, who cited the sculptural designs of both the neighborhood’s Guthrie Theater and the new U.S. Bank Stadium, home of the National Football League’s Minnesota Vikings.

To create the appearance of a monolithic design, the Encore’s façade was formed with modules filled with glass and Alucobond, complementing iron-spot brick installed on the building’s first two stories. 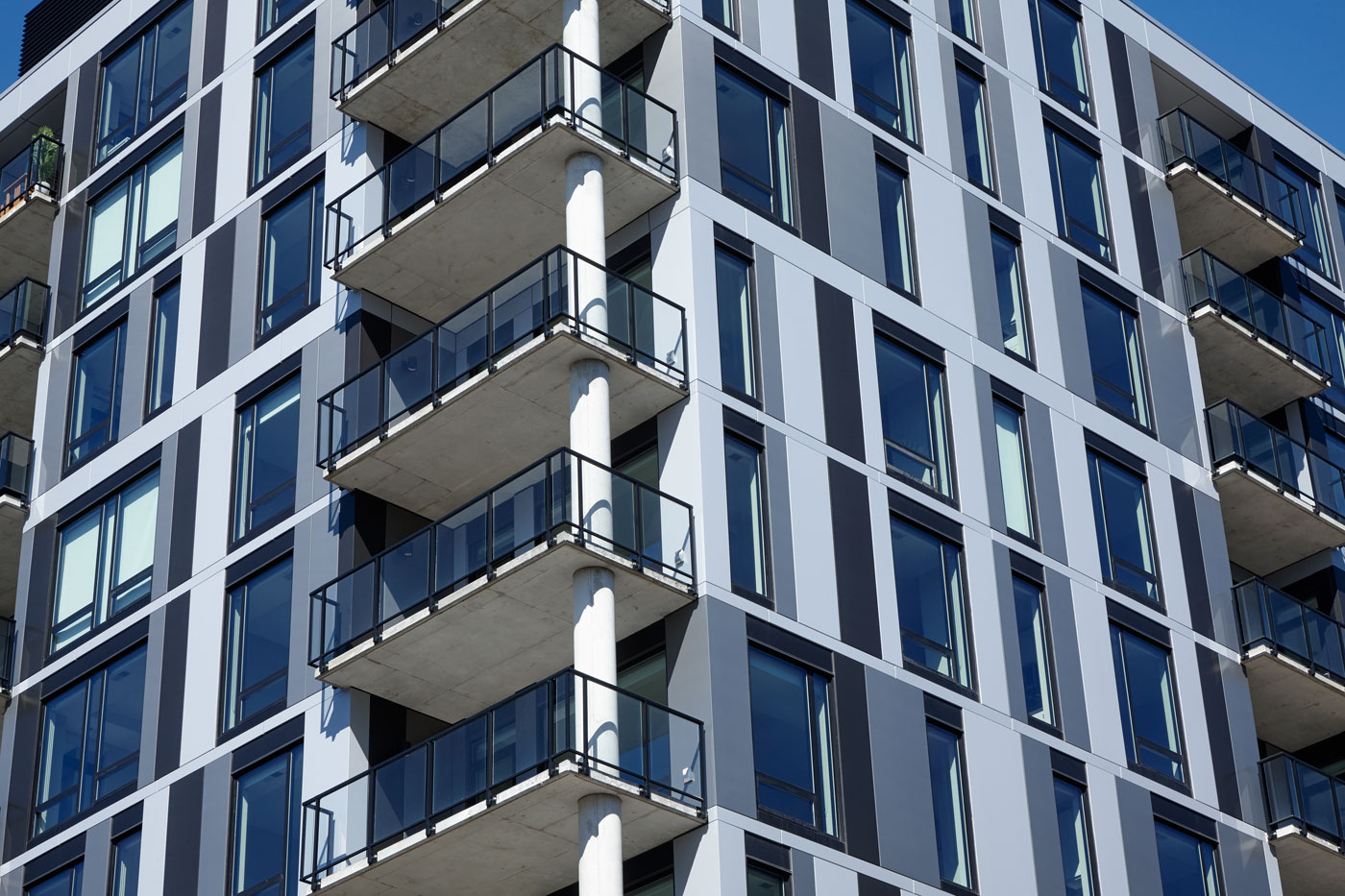 “Alucobond appears similar to glass in that it is very flat and smooth; it doesn’t oil can,” said Loken. “We chose a variety of Alucobond colors – within a primary gray palette – and finishes that reflect light differently under various conditions. The Alucobond panels seem to change color with the light.” 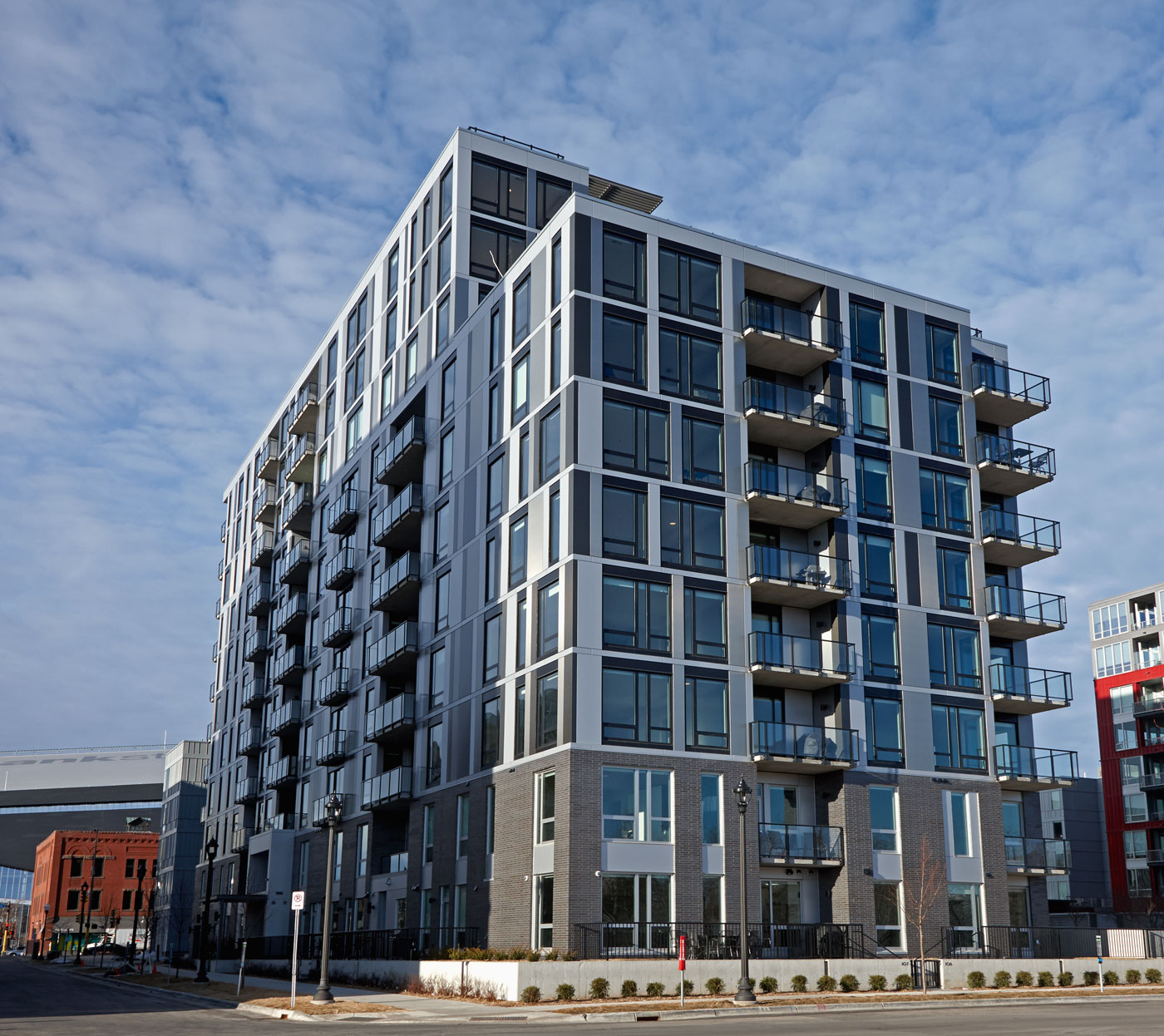 Loken said the Alucobond panels worked well with the glass to create the monolithic design.

“People tend to think of glass as transparent; but, when you view glass on a building, it often appears to be black,” said Loken. “So, we used black frames to reduce contrast between the glass and frames, making the window assembly appear more panel-like.” 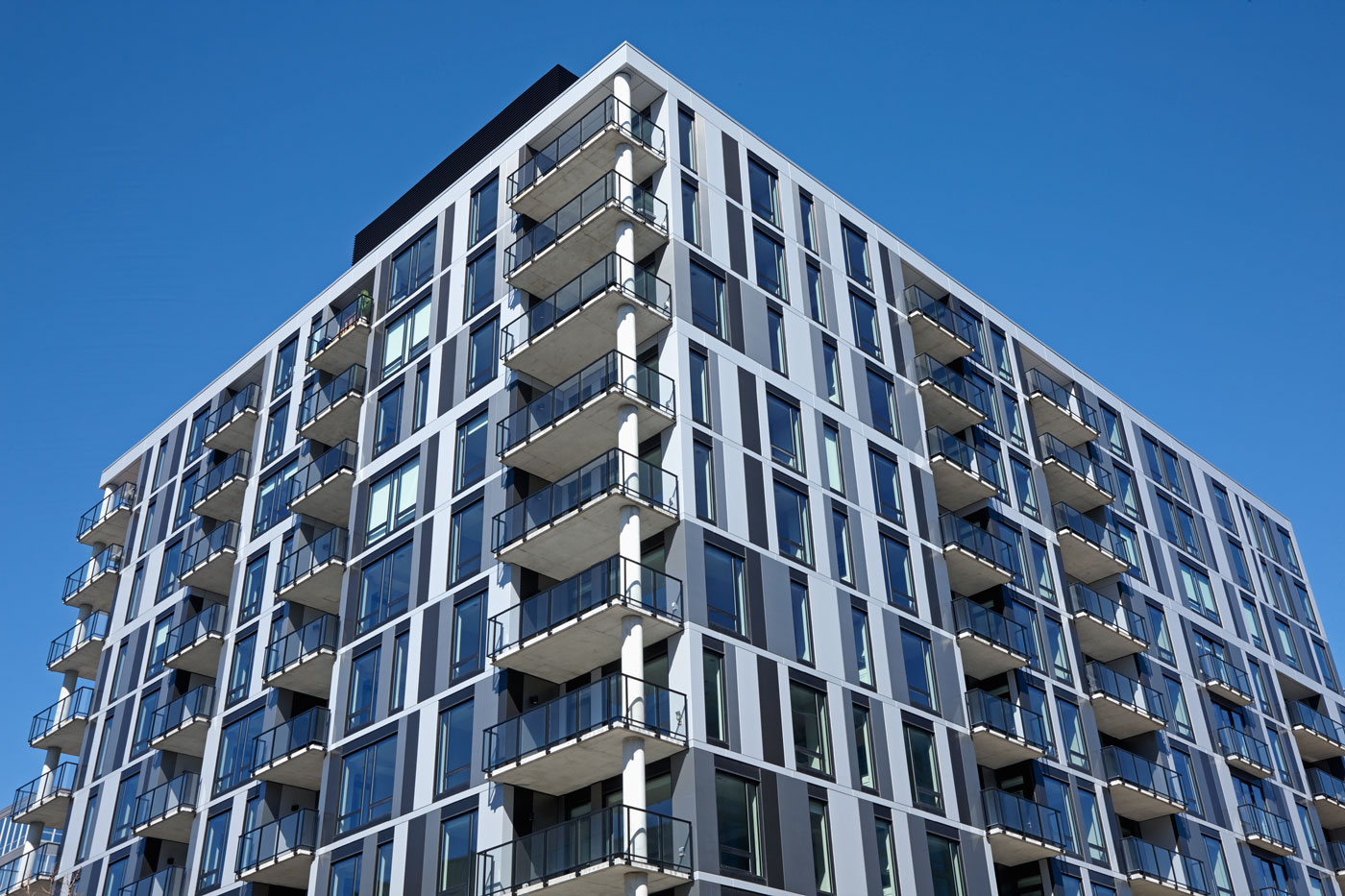 Berwald Roofing & Sheet Metal Co., Inc., of North Saint Paul, Minn., fabricated and installed approximately 2,950 Alucobond Plus panels in sizes ranging from 16 inches to 4 feet wide and up to 10 feet tall as well as other various sizes.

The Alucobond material was sold by EBP, LLC, of Excelsior, Minn.

To create the overlaid grid pattern with multiple colors of Alucobond panels, Berwald Roofing & Sheet Metal employees utilized a detailed panel numbering system to ensure that the correct panel colors were installed in the correct locations on the building.

“We had to develop a road map for installing all of the Alucobond around the building – including working in and out of recessed balconies and around windows – all while ensuring the various colors and sizes were installed in the correct location,” said Brian Berwald, manager, Berwald Roofing & Sheet Metal, which created detailed shop drawings prior to fabrication. 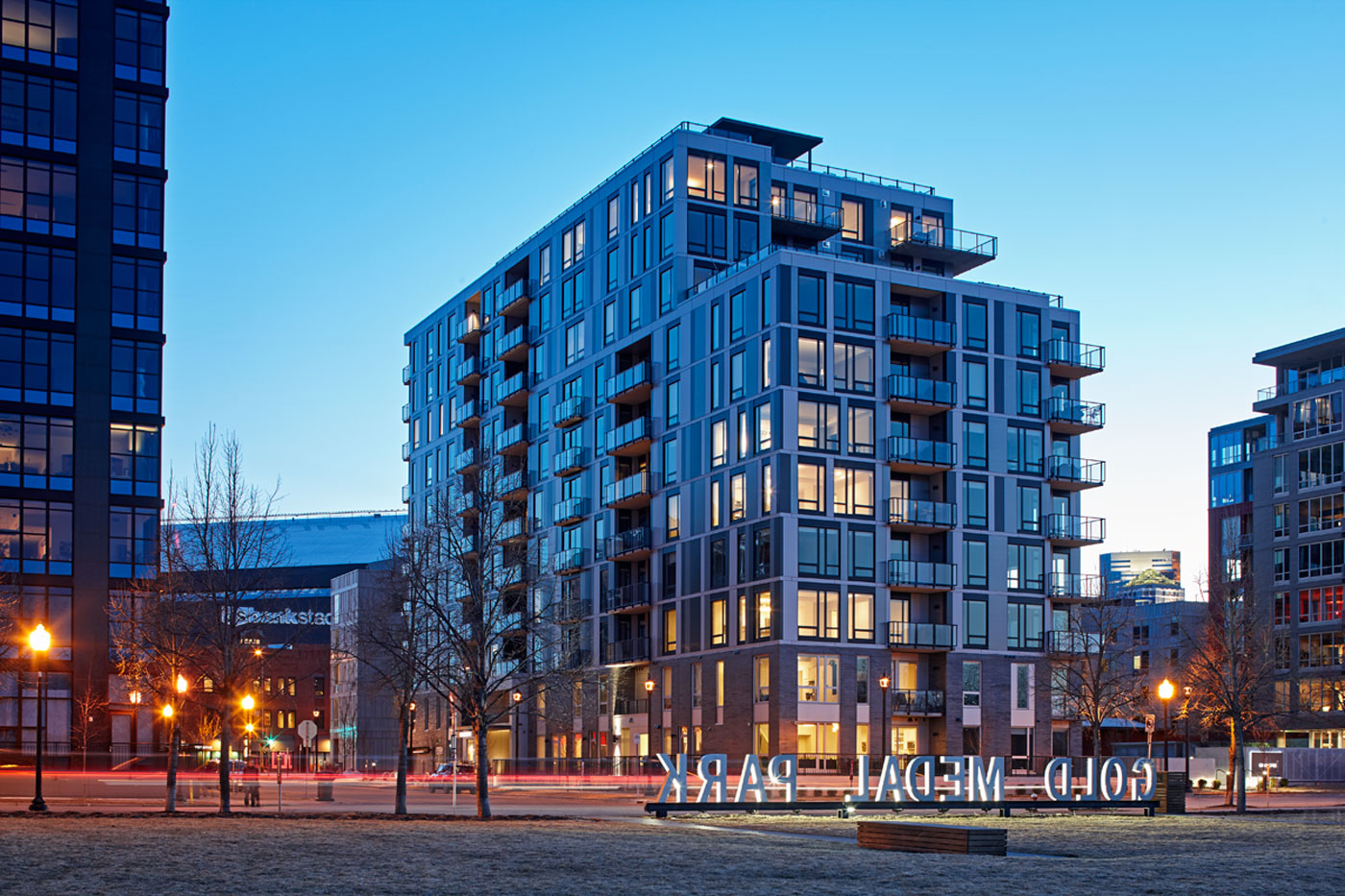 “We were very impressed with Berwald’s shop drawings,” said Loken. “They were very detailed and thorough.”

Panel installation was completed with a dry-set rainscreen system.

“As an area of the building was ready, we’d perform onsite field measurements of that area to ensure that every panel would be fabricated to fit perfectly on the building,” according to Berwald, who said employees utilized hydraulic mobile lifts for stability while installing the Alucobond panels in the traffic-congested downtown area. “We used our layout map to put the puzzle back together.”

The Encore luxury apartment building, owned by Encore Apartments, LLC, is the third in a series of projects developed on the same block by Sherman Associates, Inc., of Minneapolis, and designed by ESG. The first two projects include the Aloft Hotel and Zenith Condominiums. 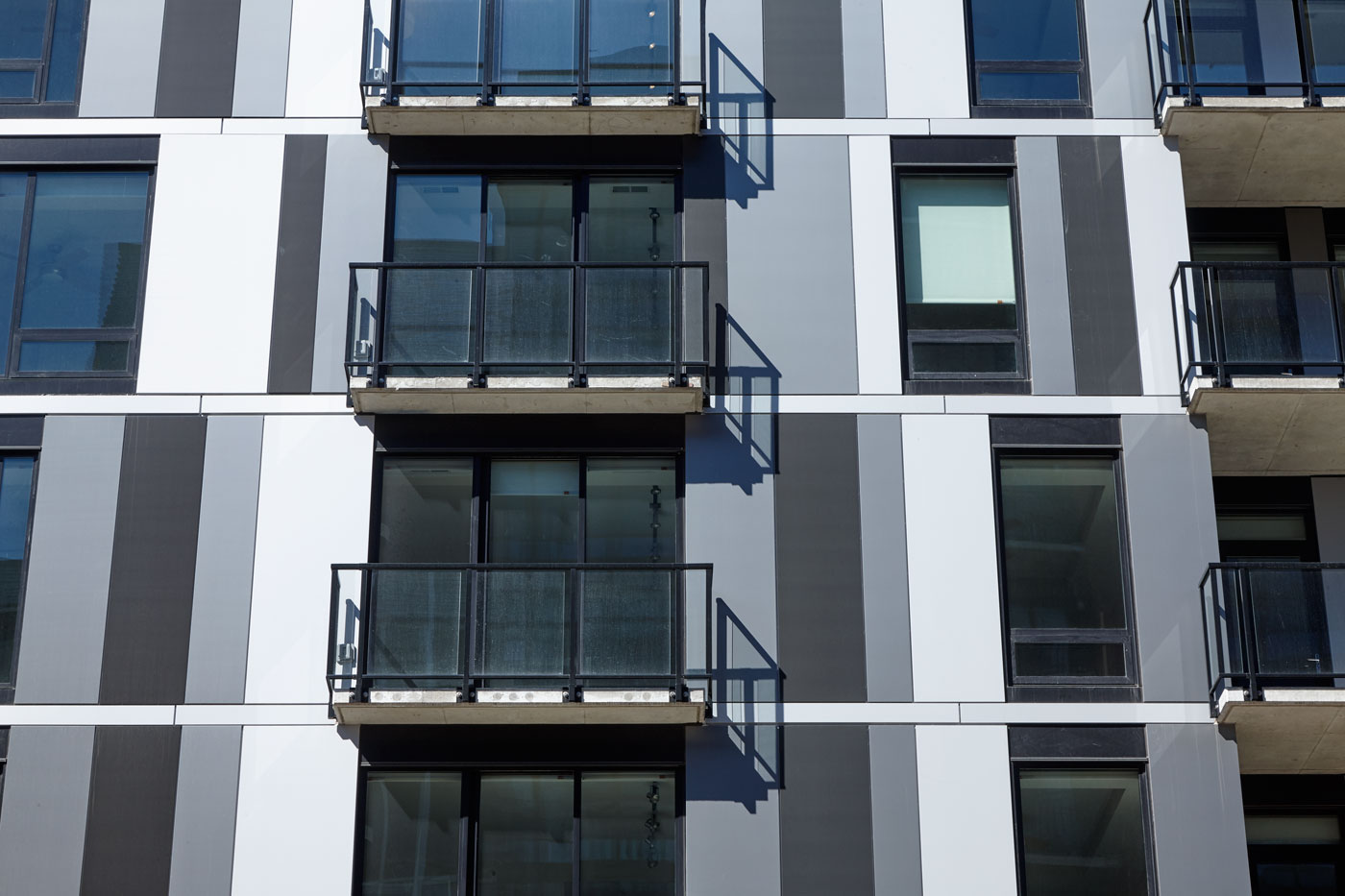 “We knew our target market for the Encore,” said Loken. “We needed a subtle, sophisticated look. The impression this building makes is one of sophistication and tailoring. … Alucobond’s precise reveals and factory-formed corners helped to emphasize the sculptural quality of this building.”

All images courtesy of ©Bergerson Photography