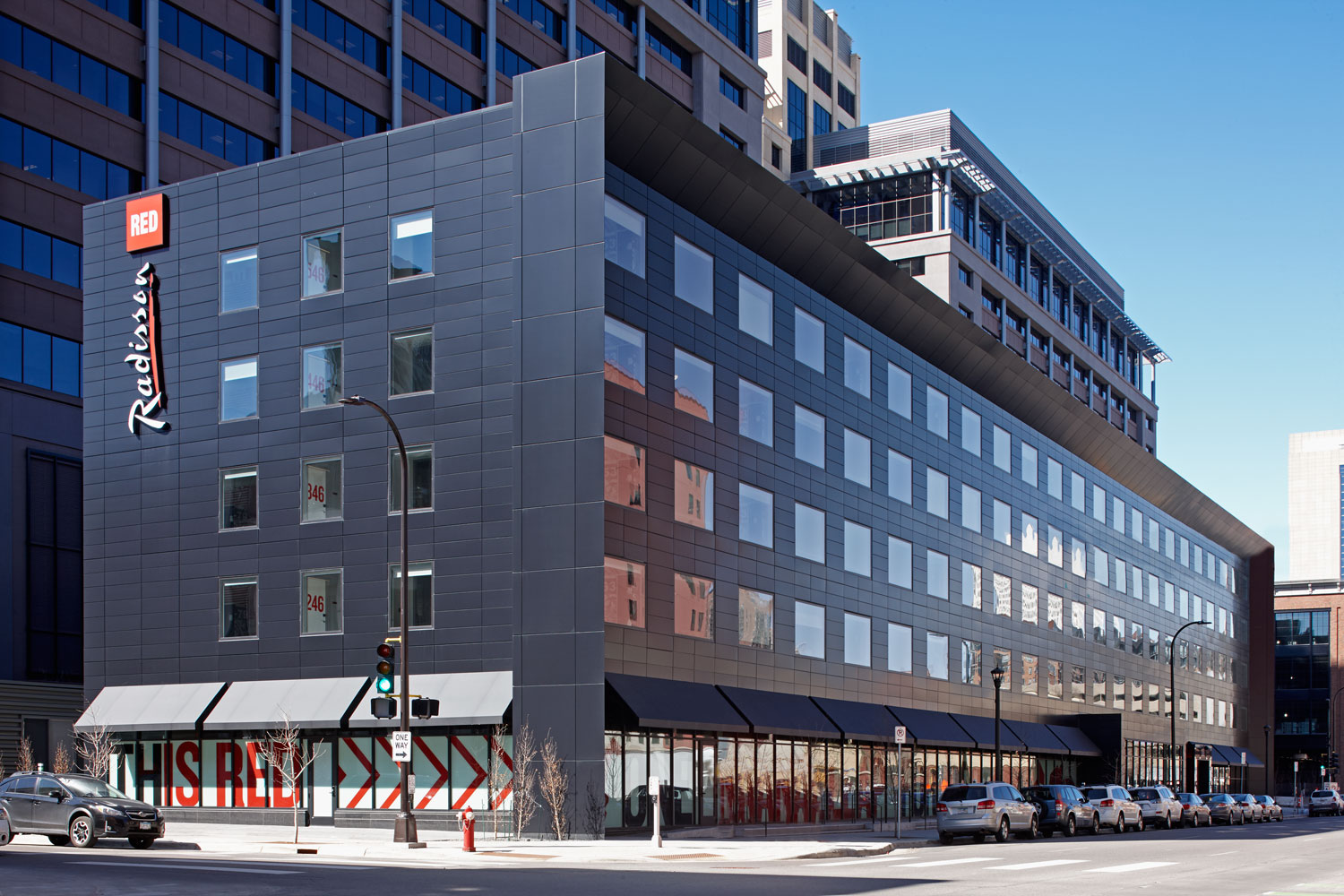 Art, music and fashion serve as inspirations for the new Radisson RED lifestyle select brand developed by the Carlson Rezidor Hotel Group, which opened its first U.S. location in Minneapolis in November 2016 as the brand’s first new build and prototype design.

(The first Radisson RED opened in Brussels, Belgium, in April 2016 as a retrofit design.) 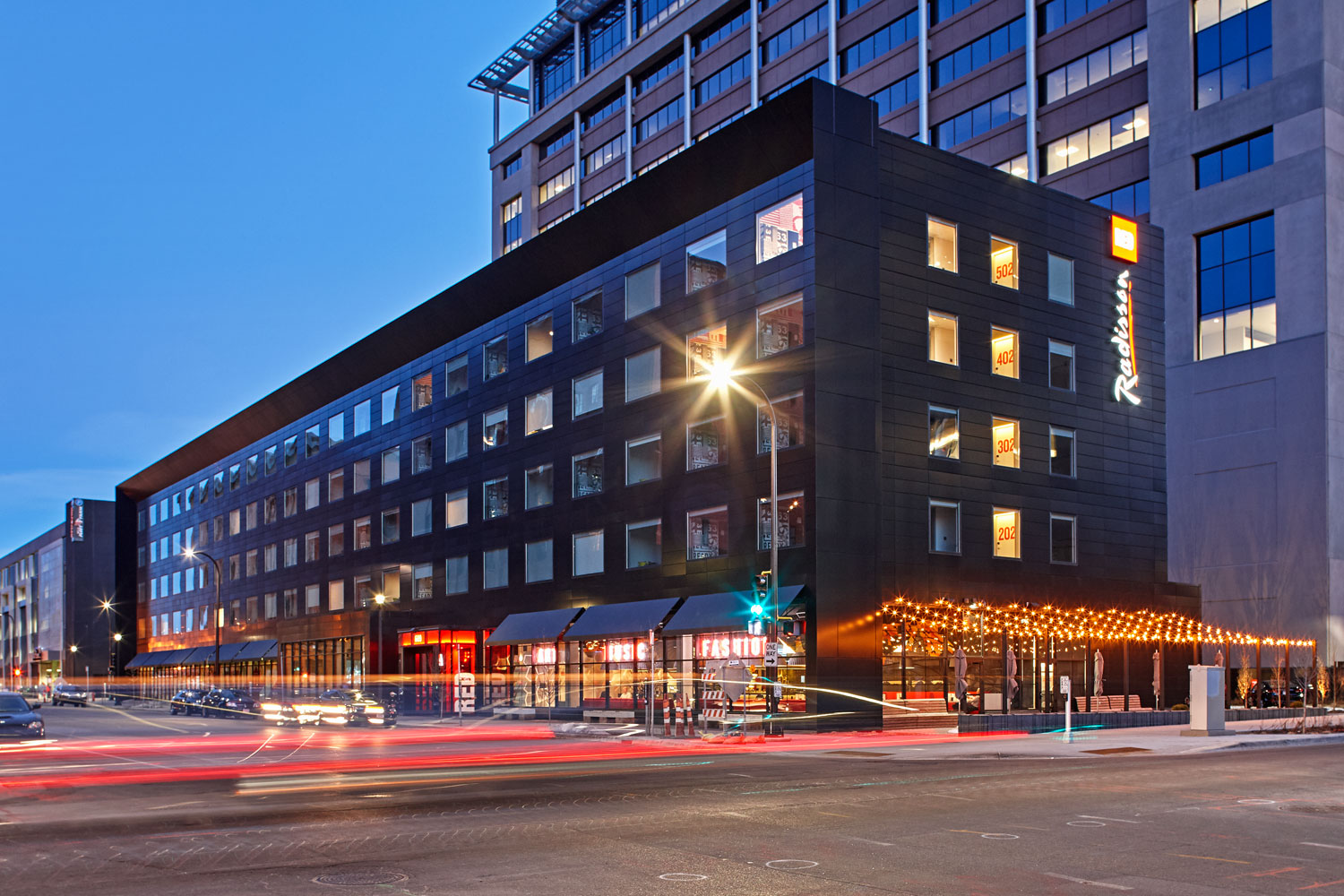 The Radisson RED Minneapolis – a 90,010 square-foot five-story 164-room hotel – is located in the city’s East Town neighborhood and within walking distance of the new U.S. Bank Stadium.

With no front desk, guests can check in to the Radisson RED with the swipe of an app, open keyless-entry doors to their rooms, and electronically chat with other guests. 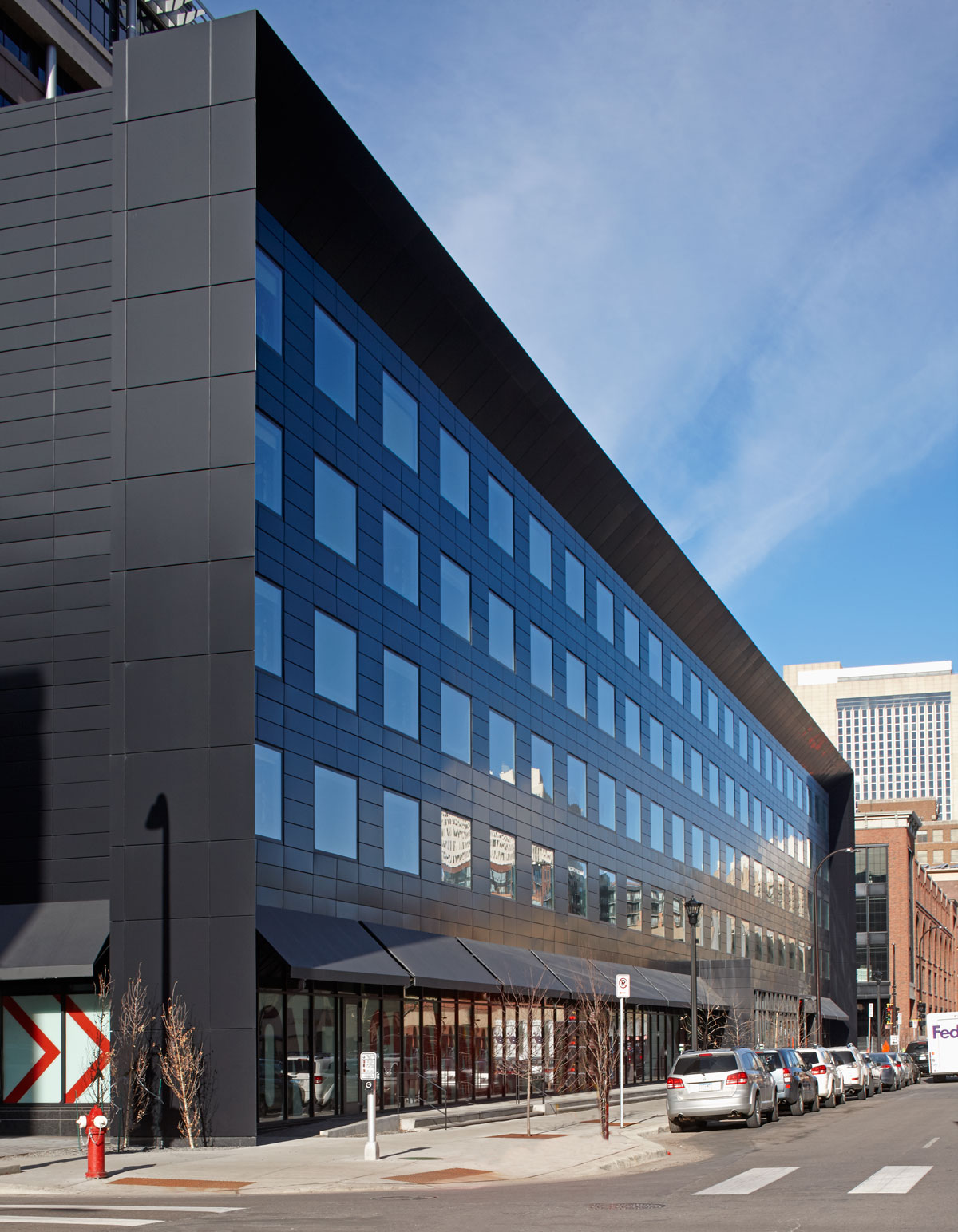 The Radisson RED brand is bold in design featuring red, black, white and gray interiors with art created right on the walls – sans frames. In the case of Radisson RED Minneapolis, local artist Adam Turman was hired to paint the local story of the “Murder of Crows” as a 128-foot by 13-foot hotel mural.

“The hotel interior is meant to feel like a museum where the building is the canvas,” said Wolf. “In addition, you’ll never see any framed, hung art inside the building. You’ll see murals on the walls and graphic wall coverings.”

An abstract frame for all of this art is included in the hotel’s exterior design, according to Wolf.

“We wanted to create a framed aesthetic,” said Wolf. “We wanted a frame for the building as well as a black-box theater effect where guests’ interactions take center stage and are celebrated.” 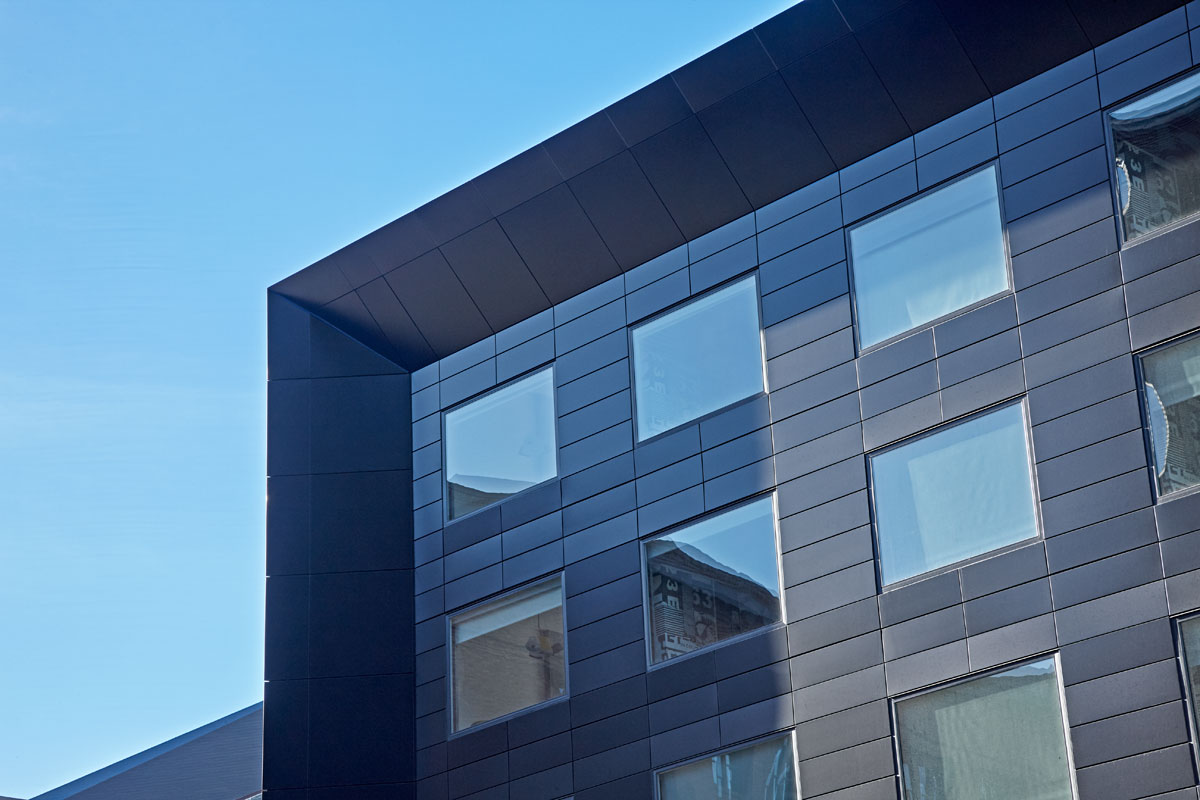 That signature frame element was created as part of the hotel’s façade, which is clad in 33,656 square feet of Alucobond® Plus aluminum composite material (ACM) by 3A Composites USA in the Focus Black color.

ESG Architecture & Design, of Minneapolis, served as architect of record for the Radisson RED Minneapolis project. And, Minneapolis-headquartered Ryan Companies US, Inc., served as general contractor.

“The exterior of this hotel is very contemporary and is designed to make a signature statement,” said Terry Gruenhagen, AIA, LEED AP, principal, ESG. “The overall design concept had to meet a high quality standard to comply with the requirement from Carlson that it serve as a brand identifier.” 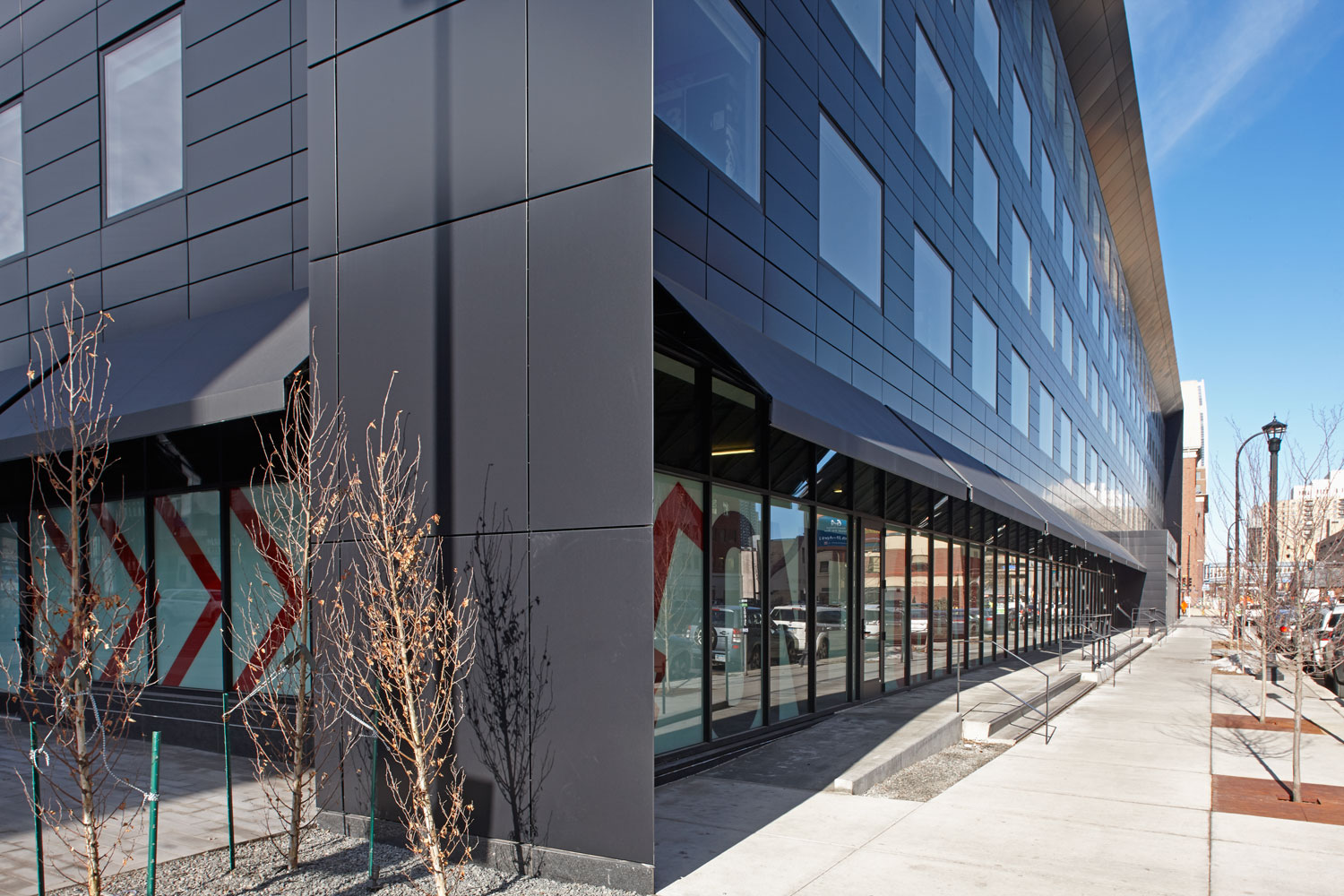 Metal panels were explored early on to clad the Radisson RED Minneapolis in order to present a “sleek, black surface,” according to Wolf.

But, the reflective metal panels originally envisioned for the building’s triangular frame element – which encases the front of the hotel on three sides from the ground level up and above the building’s five stories – were quickly ruled out.

“The frame was originally designed as a chromed mirror with the rest of the building in black,” said Wolf. “After reviewing the potential for damage of a shiny material installed at street level, we decided to make the frame element match the material used to clad the rest of the building. We kept the material matte and simple. Alucobond fit the bill. We just needed to figure out how to get it all jointed and assembled.”

“We needed a metal panel product that gave us a straight and true cladding system,” said Gruenhagen. “We did not want any oil canning, so that led us to Alucobond and the Focus Black color to meet Carlson’s branding and quality requirements. The design essentially utilizes one opaque material with the exception of the main entry.” 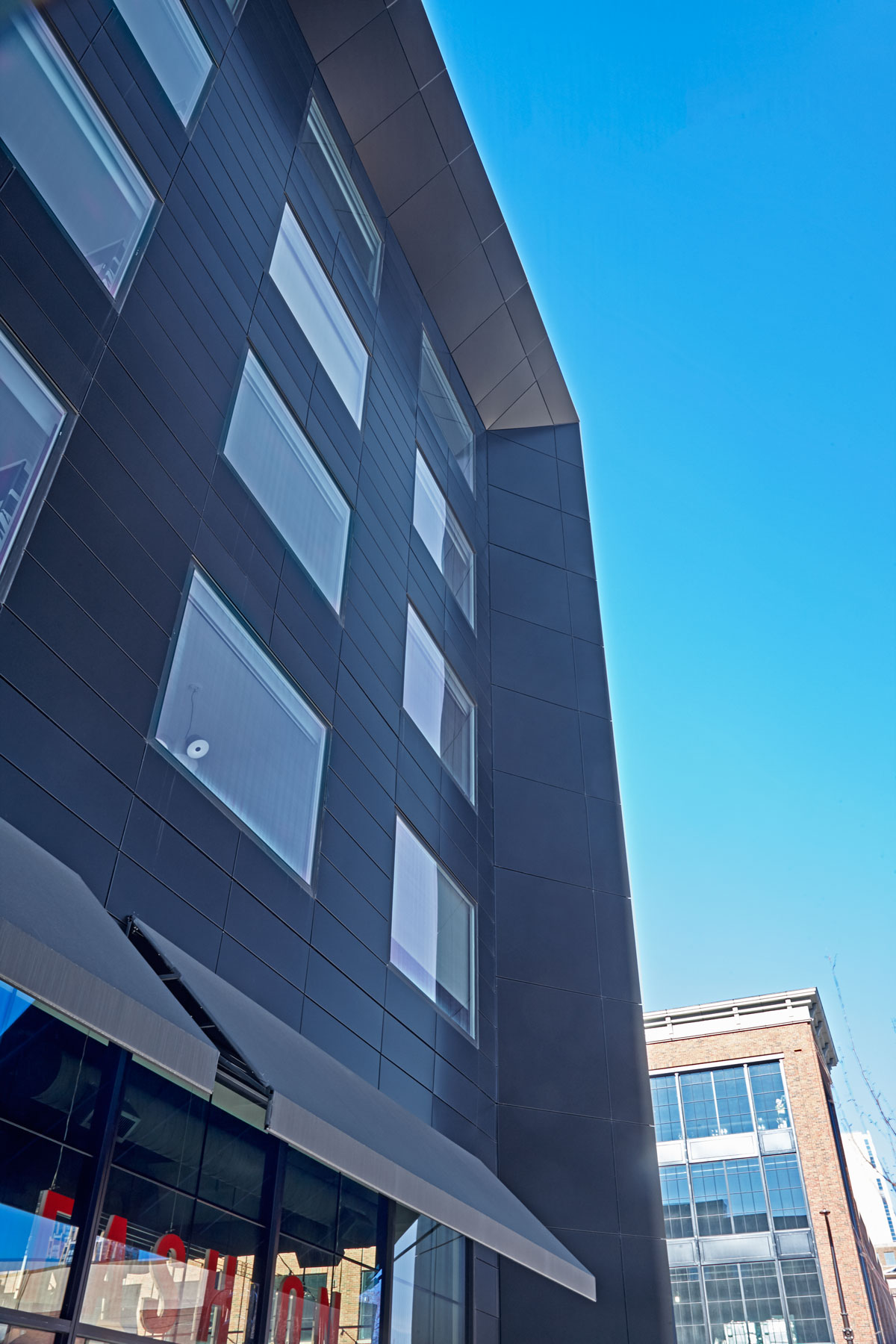 The Alucobond material was sold by EBP, LLC, of Excelsior, Minn.

“We installed Alucobond panels on the entire exterior of the building – excluding the windows,” said Rick Schmidberger, project manager, Atomic Architectural Sheet Metal. “We had to carefully align the material around the windows and install it perfectly between floors. … The framed element on the building’s north side featured triangular shapes on the two front corners and across the top; other than the framed element, this project was straight-forward. It was very large in terms of the number of panels and small sizes that were required to be fabricated and installed.” 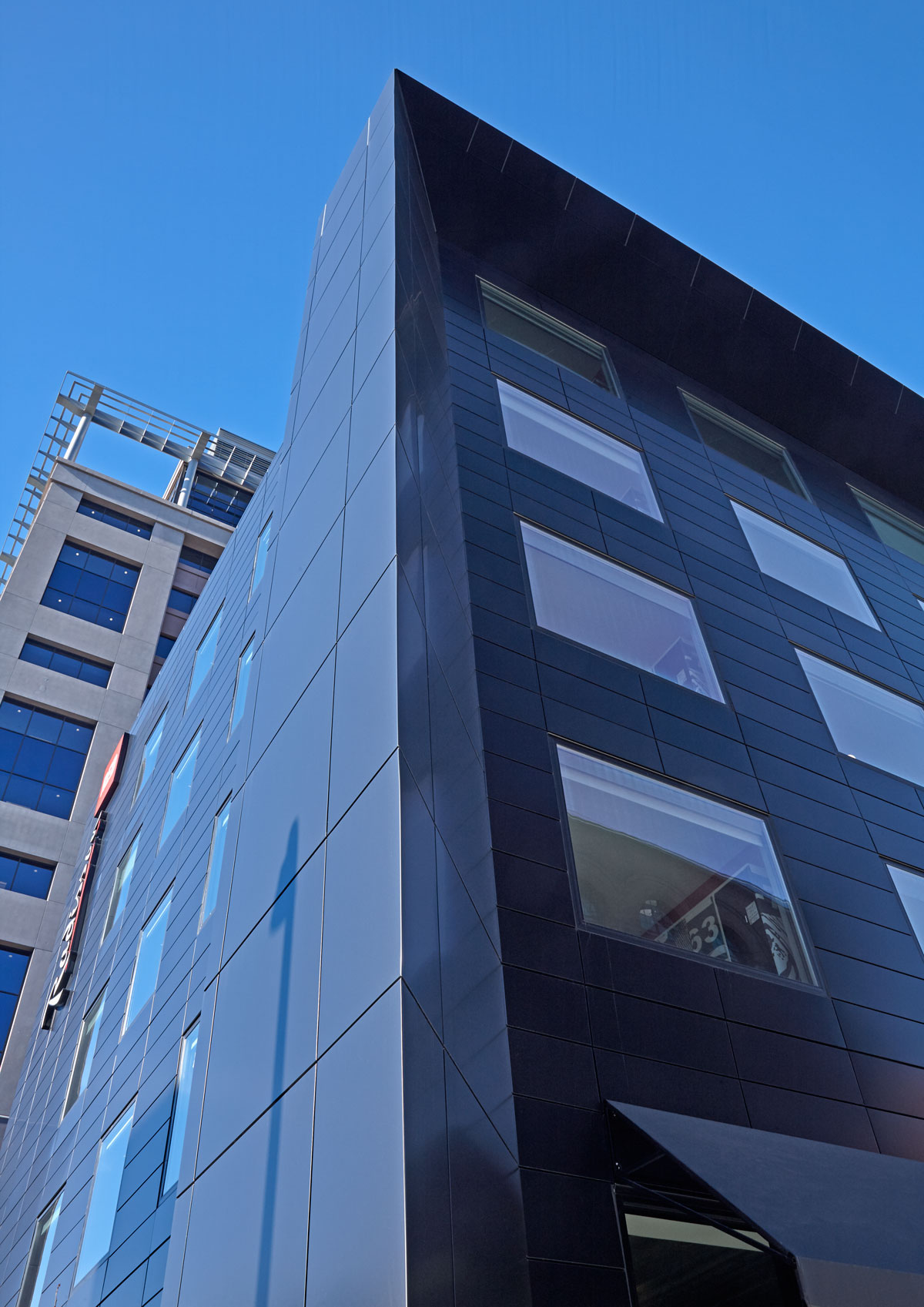 “The Alucobond panels went together well to create a nice, flat appearance,” said Gruehagen. “And, the triangular framed element turned out very well.”

ESG worked closely with Carlson in executing the hotel’s design in order to “iron out the important decisions that any hotel brand must make when it is rolling out a new prototype,” said Gruenhagen.

With its close proximity to the U.S. Bank Stadium – which is slated to host the Super Bowl in 2018 – the Radisson RED Minneapolis’ design also was of great interest to city planning officials.

“The city requires an active and lively streetscape in this area,” said Gruenhagen. “The hotel’s restaurant and bar anchor the street level along with an outdoor sidewalk café area. There also is an adjacent retail space at the east end of the building, which could be developed as a restaurant or cafe. … We’ve heard comments from people that the Radisson RED’s design does a nice job in activating the pedestrian streetscape.”