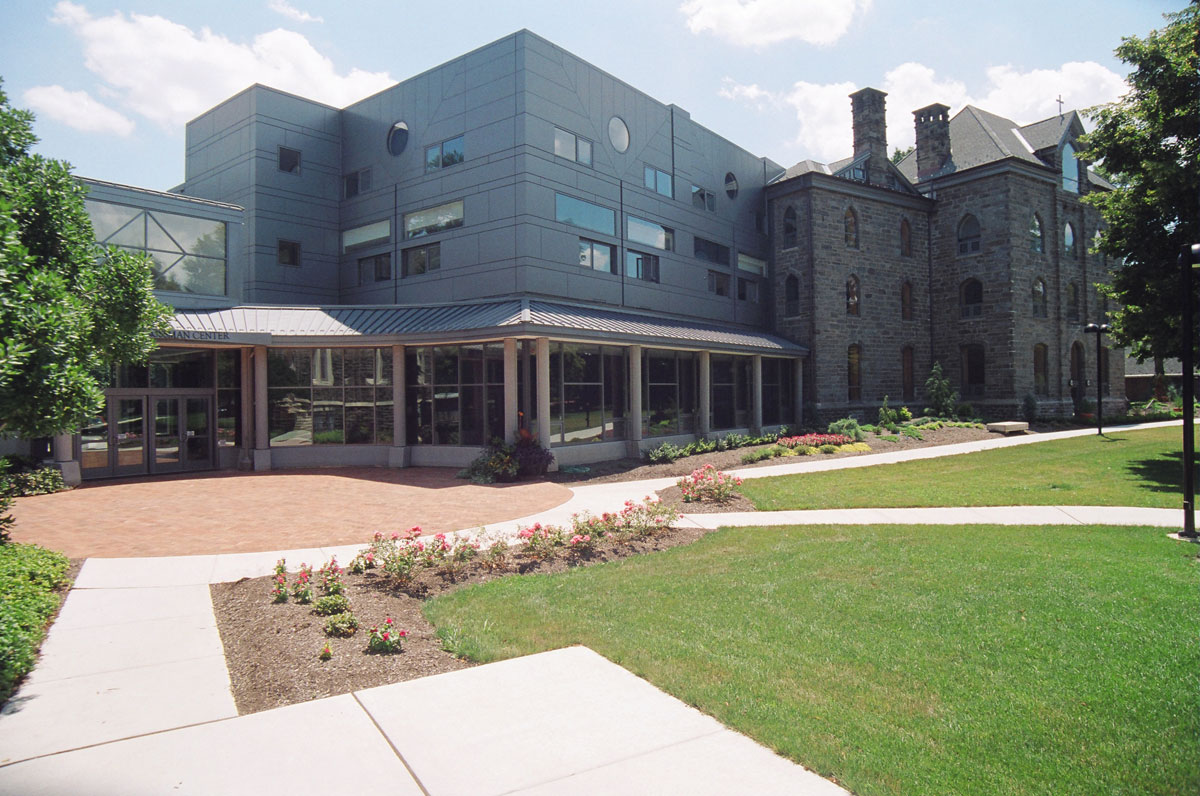 The Lutheran Theological Seminary at Philadelphia, situated on 14 park-like tree-shaded acres, has been a community presence in the Mount Airy neighborhood of Northwest Philadelphia since the 1880s. Classes at the 500-student campus – originally founded in 1864 and a seminary of the Evangelical Lutheran Church of America – have been held in a hodgepodge of historic spaces, including the dining rooms of professors who reside in campus housing.

So, when seminary leaders began to envision a dedicated classroom facility on campus, they sought out architectural designs that would incorporate modern technology while preserving the site’s historical ambiance. They agreed to construct the new learning facility – The Brossman Center – in the space occupied by a decommissioned dormitory built in 1888. They chose a design by GYA Architects Inc. of Philadelphia. Led by architects George Yu and Lotus Leong, the firm has developed a specialty in religious building design – including churches, parochial schools and seminaries – with an emphasis on blending historic significance with modern amenities. 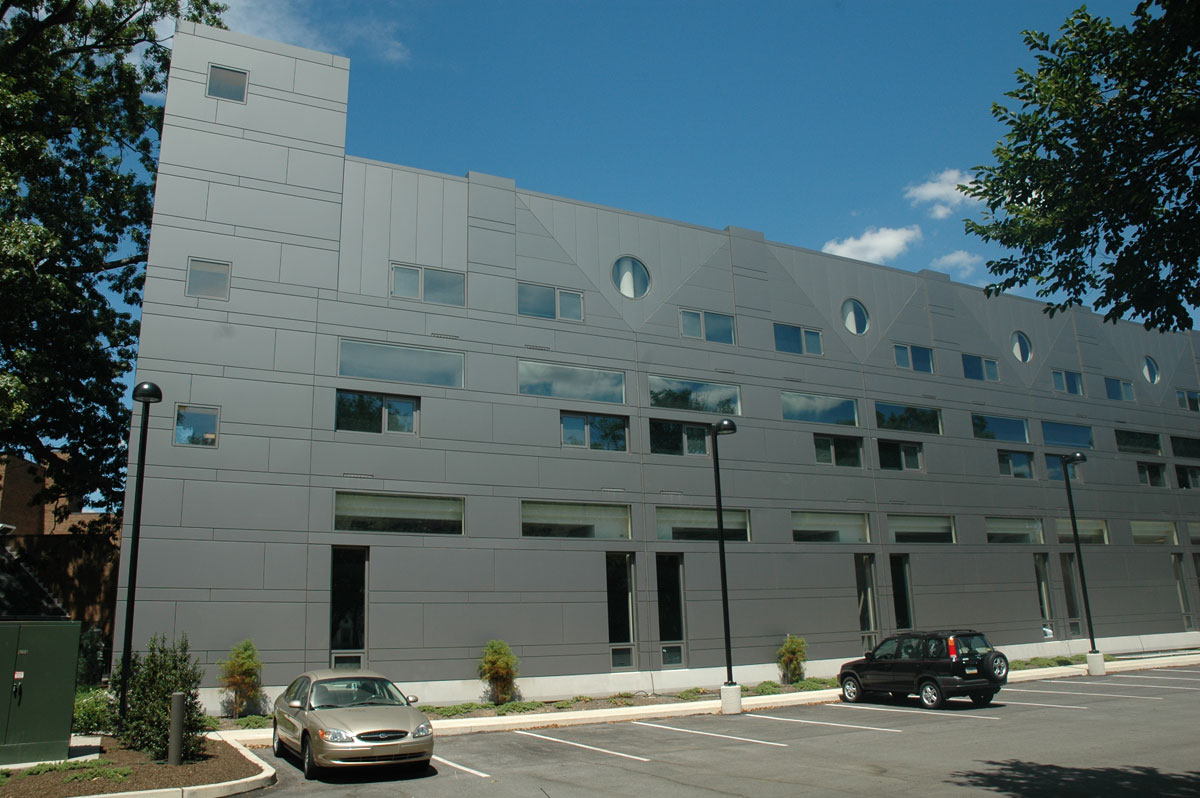 Although the 1888 dormitory did not offer the space, structural or mechanical requirements to be renovated into a modern classroom facility, its architectural presence would be greatly missed if it were completely demolished. The building was constructed from Wissahickon Schist stone – predominant bedrock underlying Philadelphia that is no longer quarried.

“The 1888 building was so much a part of the campus quadrangle,” said Leong. “It was the first building that made a statement on campus.”
In order to retain that historic architectural presence, GYA restructured the building’s three-story front stone façade as a building welcoming area, featuring three originally-designed floors of arched glazed windows that face the campus quadrangle.

“Our design was focused on ensuring that light could stream into the building starting with the circular windows on the third floor,” said Leong.
The ability to reflect light proved a powerful factor in the specification of a very contemporary building material – Alucobond® aluminum composite material (ACM) by 3A Composites USA – to complete the 40,000-square-foot $20-million three-story Brossman Center, which was oriented at an oblique angle behind the original stone facade. Approximately 17,910 square feet of Alucobond ACM in the custom Lutheran Pewter color and 4mm thickness was fabricated and installed on all four sides of the building by Eastern Exterior Wall Systems Inc., Midlantic, based in Horsham, Pa. Alvin H. Butz, Inc., of Allentown, Pa., served as general contractor for the project. 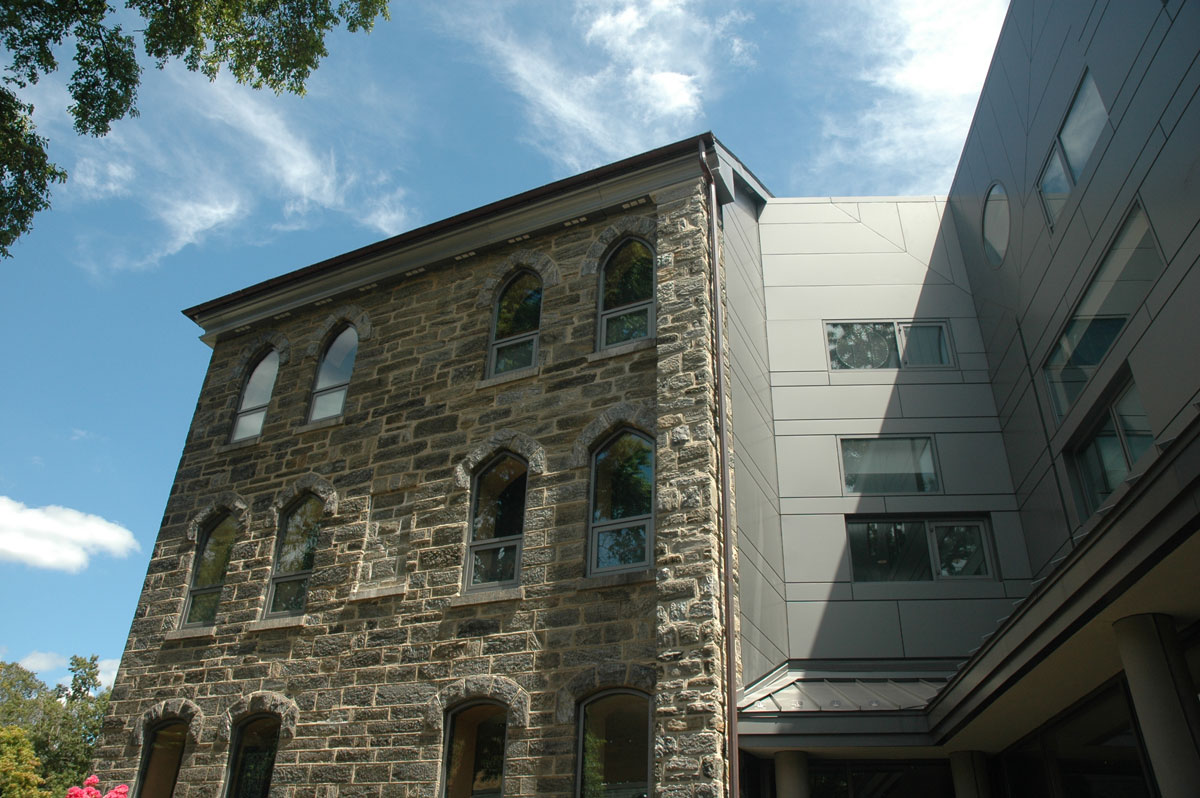 “The contemporary appearance of the Alucobond provides a neutral backdrop behind the stone façade,” said Leong. “The reflective aluminum quality and oblique-angled site planning of the Alucobond paneled building almost make it disappear. The Brossman Center is the largest building on campus, but it appears smaller and inviting with the 1888 historic front at the entrance façade. The Pennsylvania stone is dark while the Alucobond is more reflective and ethereal. The combination of the window glazing and Alucobond makes the building appear very light. The glass and Alucobond create a harmonious relationship within the historical building context.”

John Kahler, director of communications, The Lutheran Theological Seminary at Philadelphia, describes the blending of historic and contemporary materials in The Brossman Center as “a fascinating contrast that people love.”

“This building has, in many ways, transformed this institution,” said Kahler. “People love it. It’s a showpiece. 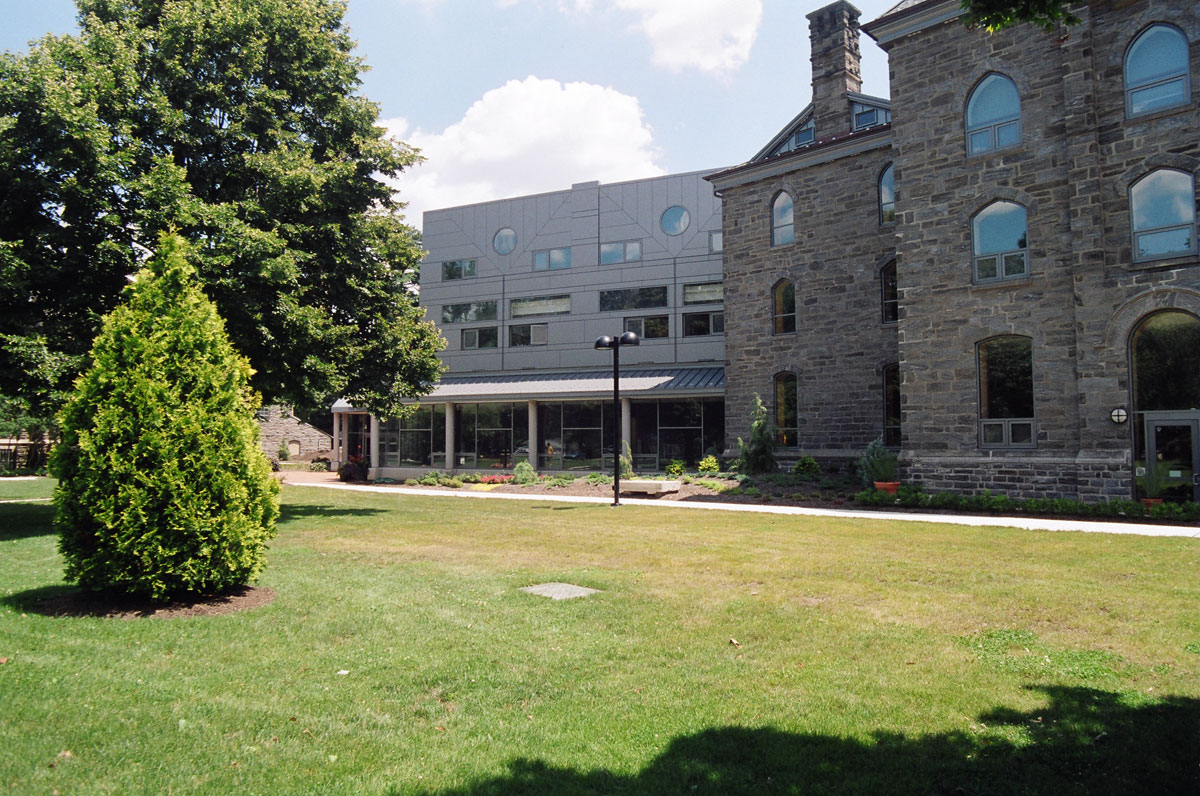 In addition to housing seminary classes, the new Brossman Center has opened itself to the Philadelphia community as a full-service meeting and event venue. The building was designed with eight conference rooms and 11 classrooms of varying sizes along with generous, open public spaces. The largest gathering space is Benbow Hall, which can accommodate up to 450 guests. Meeting technology includes state-of-the-art audiovisual capabilities, video and teleconferencing, and wireless Internet access in all meeting rooms.

Seminary admissions, student services and the registrar’s office are located on the third floor, while the building’s ground floor features public spaces, including a lounge and gathering areas. The basement provides compact storage for the nearby 100-year-old Krauth Memorial Library and the Lutheran Archives Center at Philadelphia, which serves the northeastern United States.

Kahler said visitors who approach The Brossman Center through the building’s rear entrance facing the parking lot see only the new Alucobond façade.

“They’re floored when they see the other side of the building with the 1888 dormitory stone façade and how well it all blends in,” said Kahler.
GYA designed the Alucobond panels to be installed in an intricate pattern evocative of the window openings in the 1888 building, according to Leong. 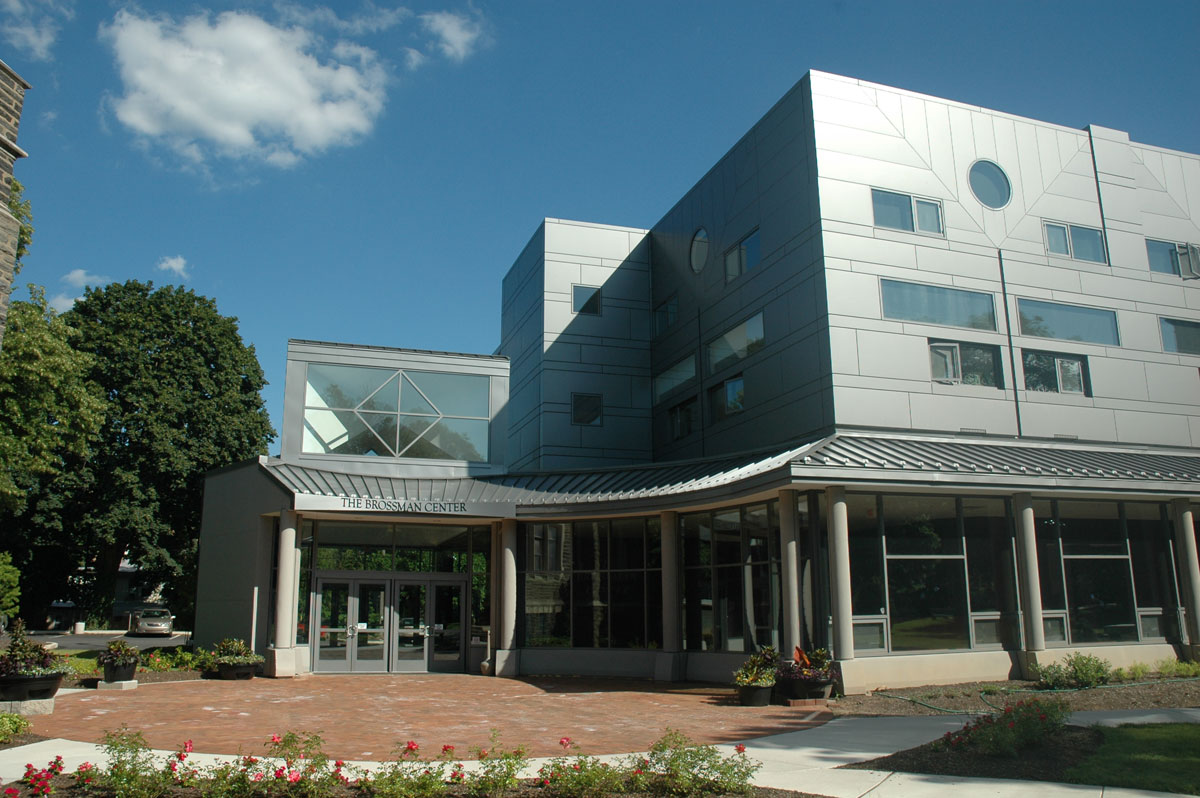 “The Alucobond runs the length of the building (on the parking lot side), so we paneled the back side of the building to define rhythmic window openings,” said Leong. “The pattern of the Alucobond is in scale to the light openings. It’s a well-balanced composition.”

Eastern Exterior Wall Systems’ pre-fabricated system includes attaching the fabricated Alucobond pans via aluminum extrusions to its 10-foot by 30-foot welded light-gauge frame assemblies, which also include sheathing, air/vapor barrier, and necessary metal closures and trim. The company’s system “enables the exterior of the building to be closed up in a fraction of the time normally required by stick building,” said Wayne Martin, president, Eastern Exterior Wall Systems, Midlantic.

The Alucobond panels were cut with a rout and return method.

“The detailing of the Alucobond made this a very interesting design; there are a lot of contours in the pattern,” said Martin. “The Alucobond blended well with the stone.”

Ground was broken for The Brossman Center in March 2004, and the building was dedicated in September 2005. A future phase of the seminary’s master plan is to connect the 100-year-old Krauth Memorial Library with The Brossman Center.