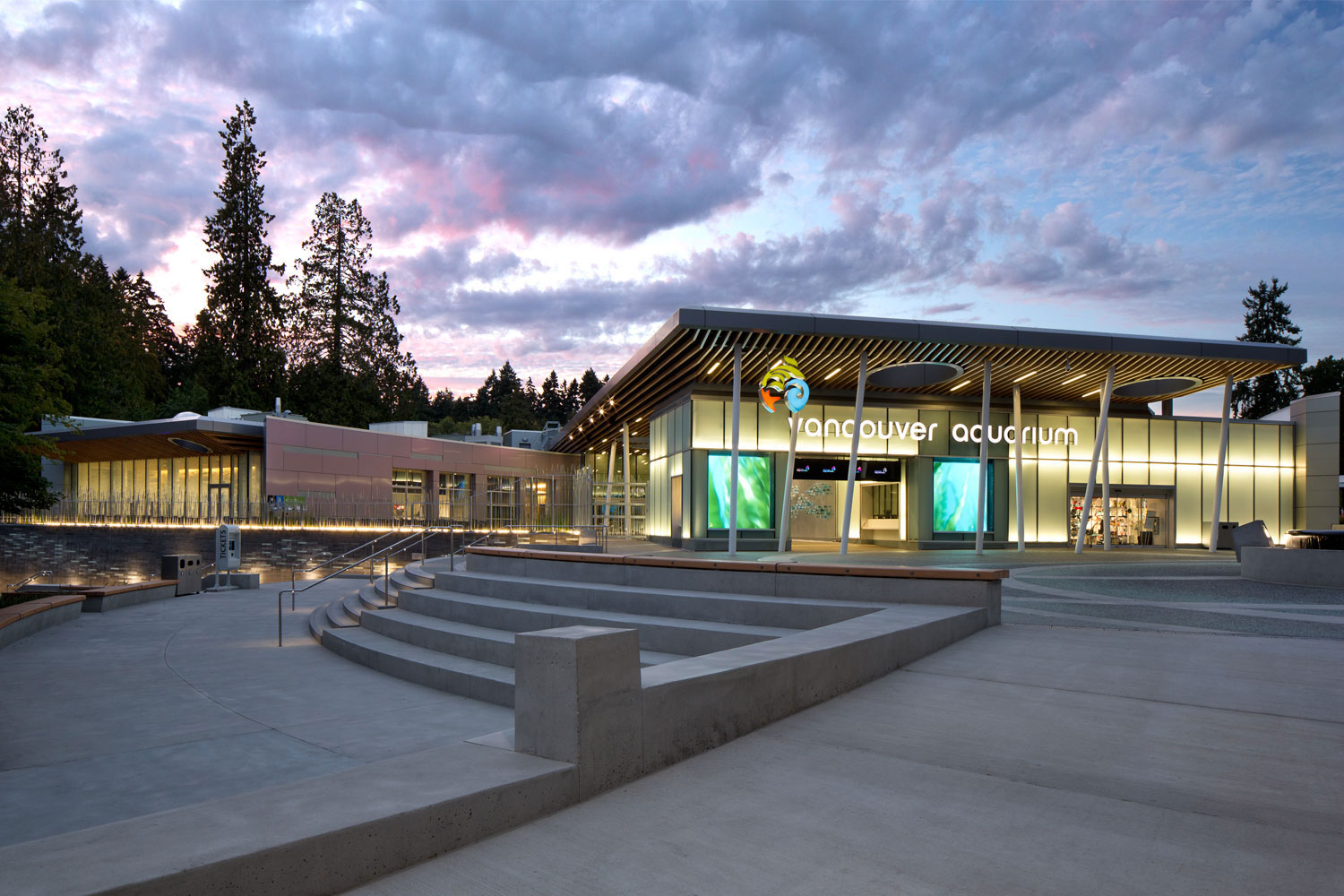 The Vancouver Aquarium’s $45-million renovation and expansion was unveiled in June 2014 in Vancouver, British Columbia’s Stanley Park as the most significant expansion in the 58-year history of Canada’s largest marine science center. Designed to evoke the flow of water and the wonder of aquatic life, the new two-story 55,000 square-foot aquarium building features a curvilinear architectural design that is clad in sophisticated color-changing aluminum composite material (ACM) mimicking fish scales in hues ranging from green to pink. 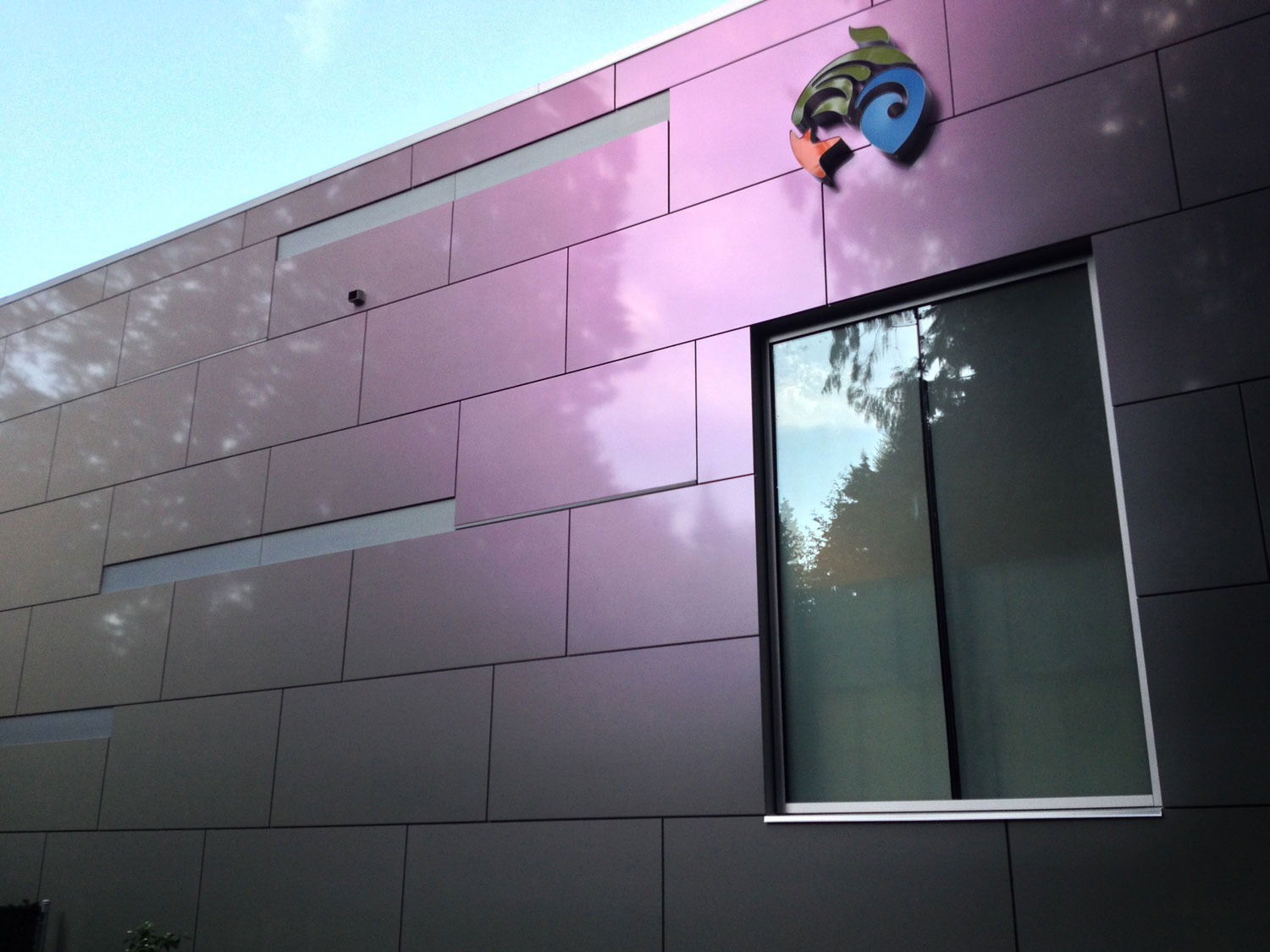 A total of 12,000 square feet of Alucobond® ACM in the Spectra Sakura color finish and 4mm thickness was installed on the Vancouver Aquarium building in an advanced pressure-equalized wall system. The Alucobond Spectra Colors finishing system was introduced by 3A Composites USA to allow architects to incorporate a unique, ever-changing color spectrum in building cladding. Alucobond Spectra Colors change colors as different wavelengths of light are reflected back to the audience, depending upon the viewing angle. 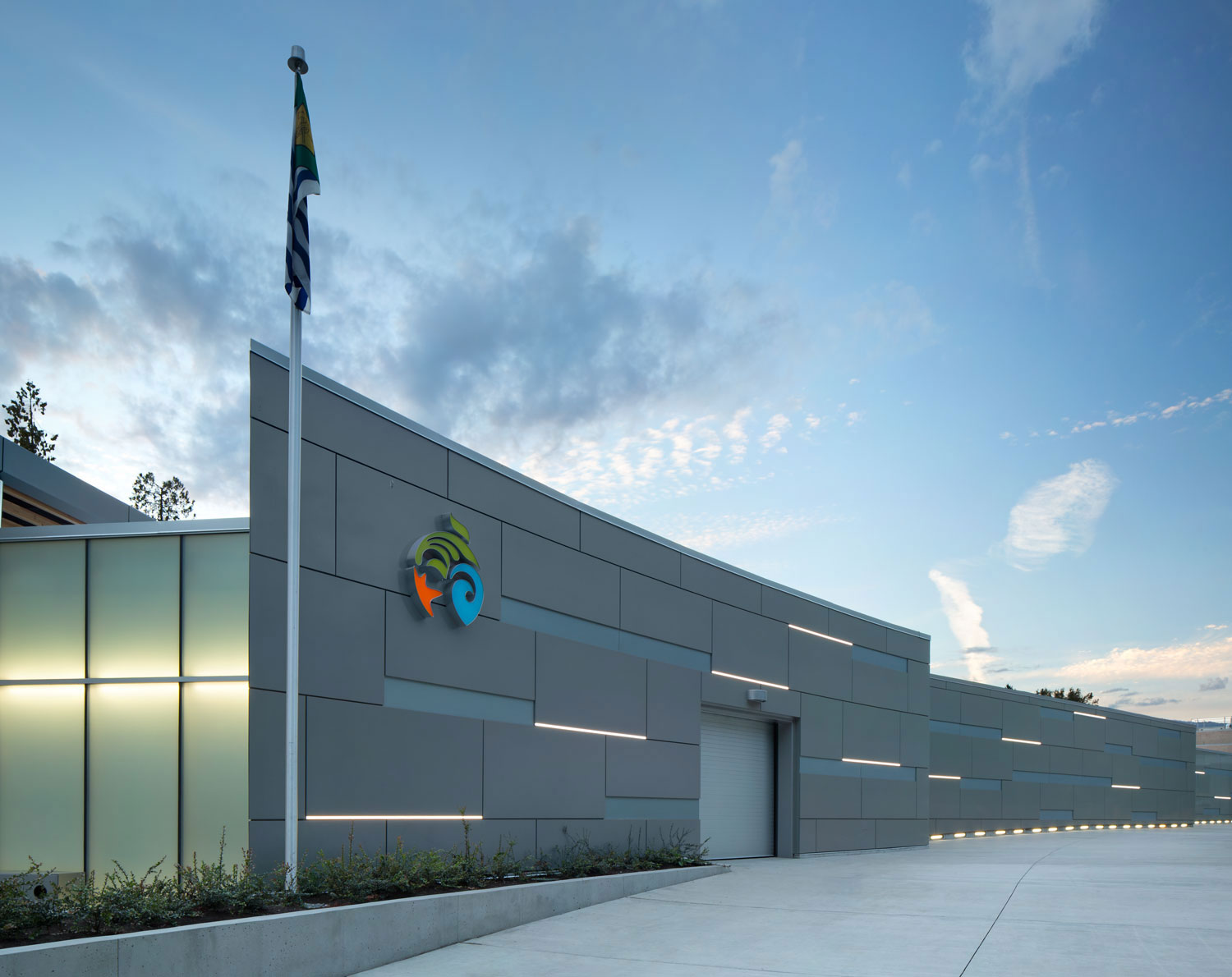 Since opening in 1956 in a 9,000-square-foot facility in the park, Canada’s first public aquarium has grown “piece-by-piece,” according to Thompson, to occupy more than 100,000 square feet.

“The Vancouver Aquarium is a much-loved institution that we all treasure,” said Thompson. “This latest project gave us the opportunity to take an incongruous set of expansions and renovations and create a more unified image. We wanted to give the aquarium an identity and presence within Stanley Park that would increase its value to the city.” 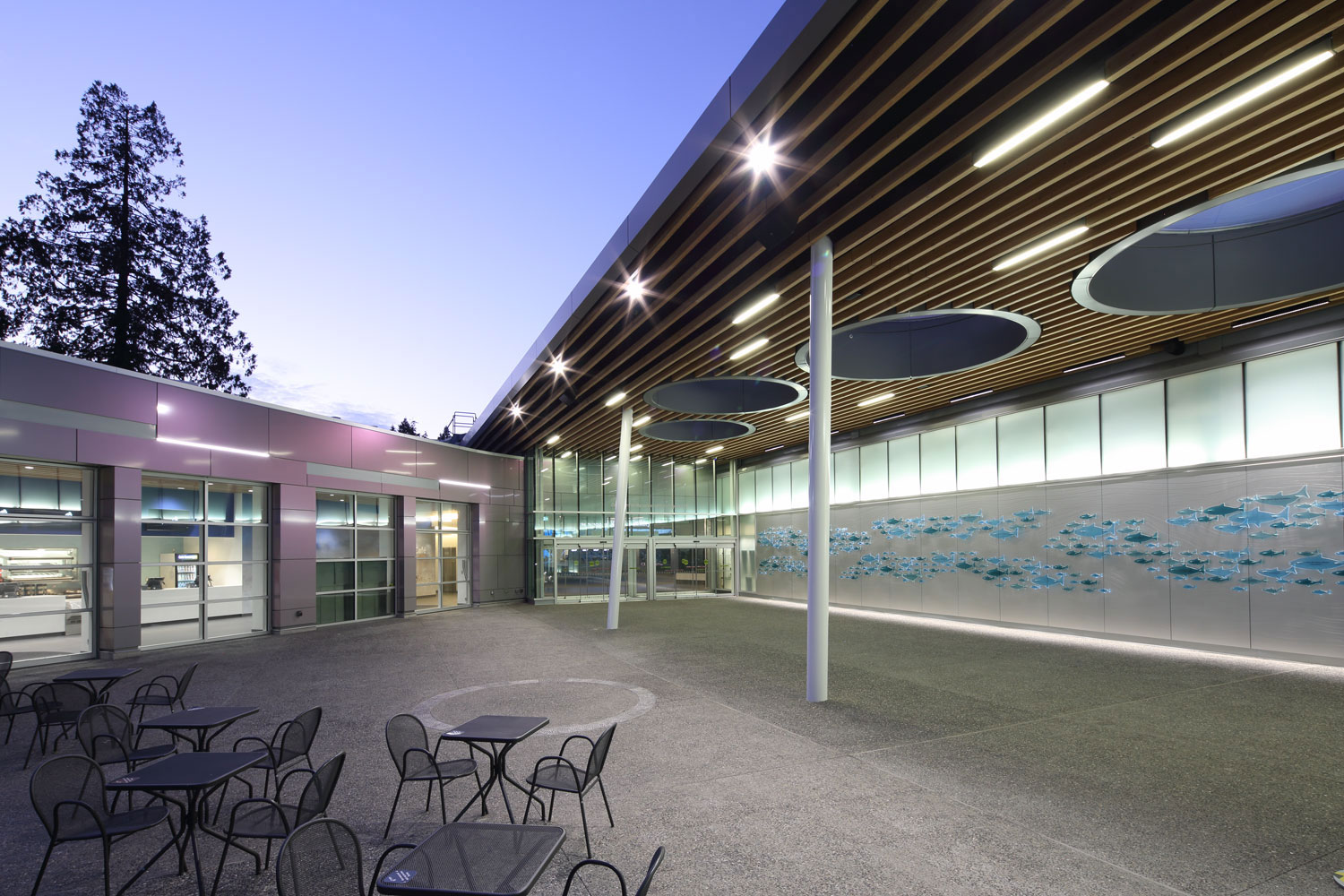 The aquarium building’s large curved walls are evocative of animal life and water – “a curved, organic form,” according to Thompson. The curvilinear design fits well with Stanley Park’s large trees and pools of water and the aquarium’s outdoor exhibits that wind in and out of fixed natural areas, he said.

The choice of exterior wall material also took its cue from nature, according to Thompson, who said the design team wanted the cladding to mimic fish scales and started with a review of colored materials that could achieve this effect.

“The material also had to be durable,” said Thompson. “In a salt-water environment, the building’s cladding had to be corrosive-resistant. Additionally, we needed a low-maintenance material because this is a major public building.”

Stanley Park borders downtown Vancouver and is surrounded on three sides by waters of the Pacific Ocean. 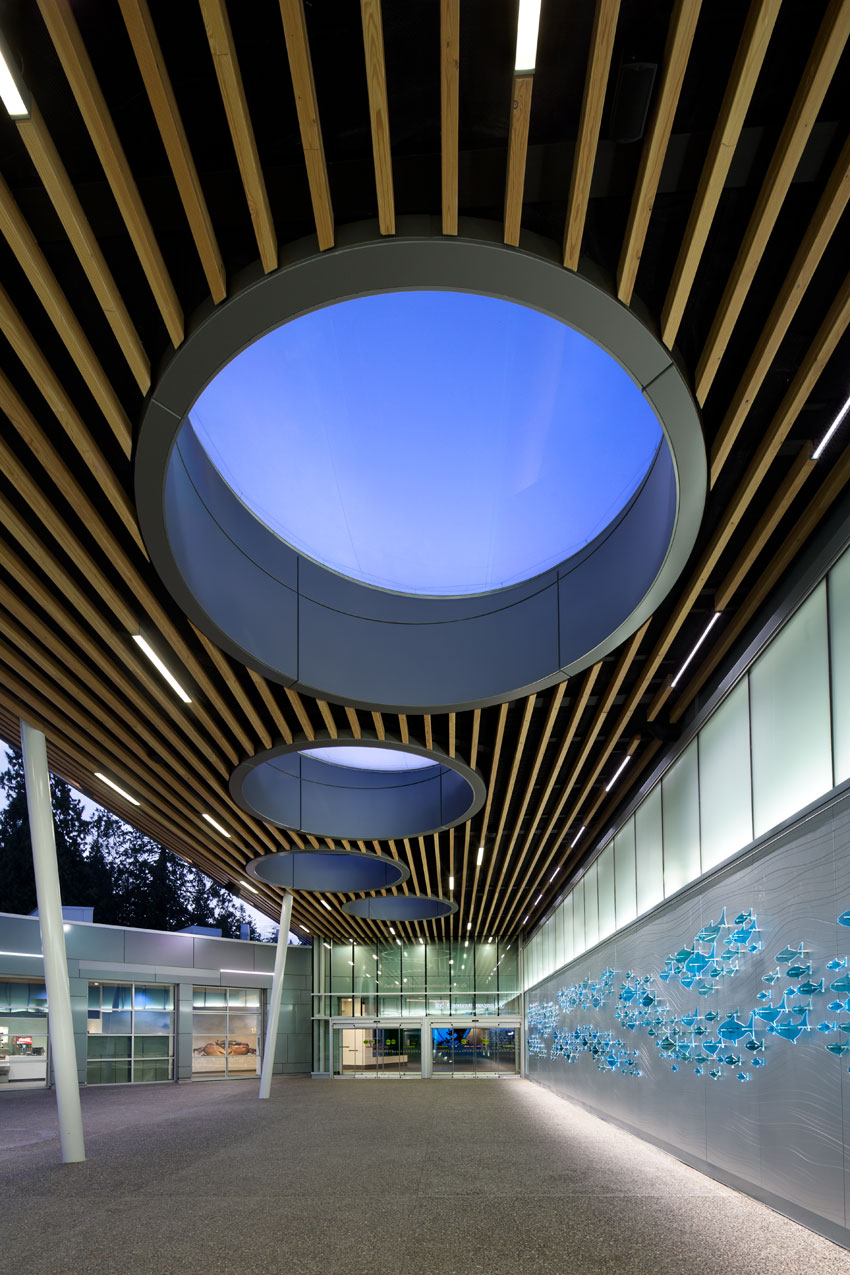 “We were quite familiar with Alucobond and looked at the Spectra Sakura finish to create the fish-scale coloration,” said Thompson. “The green-to-pink combination fit in Stanley Park because it was subtle. As you move around the building, you see a change in coloration. And, as the sun moves across the building, it changes color as well. The curve looked good with the Sakura; it really produced the desired effect.”

To heighten the fish-scale effect, the Alucobond Spectra Sakura panels were installed on the walls with a staggered panel joint layout.

“The fish-scale look produced with the Spectra Sakura is definitely a feature of these walls,” said Thompson. “We were looking for an architectural element that was uniquely evocative of the aquarium’s mission.”

The Vancouver Aquarium Marine Science Centre is a self-supporting, non-profit society dedicated to effecting the conservation of aquatic life through display, communication, public programming and education, research and direct action. The non-profit marine science center is a tenant of the City of Vancouver. 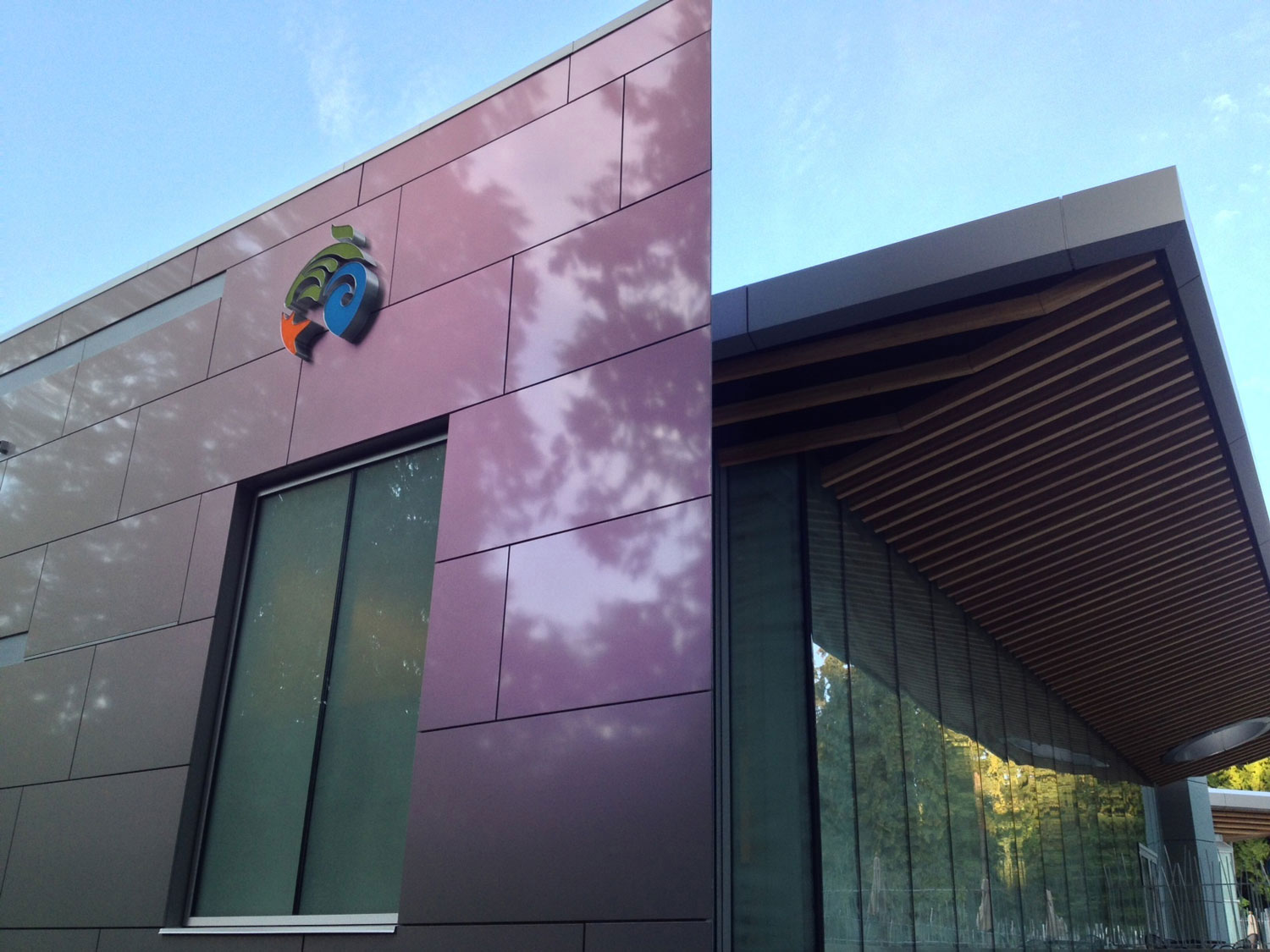 Keith Panel Systems (KPS) introduced all of the Alucobond Spectra Colors options to MCMP in 2011 when it began working with the architectural firm in a design-assist capacity. KPS built two large building mock-ups – each on castor wheels – for convenient indoor/outdoor viewing of the color changing panels during presentations to Vancouver Aquarium officials before the Spectra Sakura color was selected.

“Spectra Sakura was chosen because it provided the marine life aesthetic that the architect desired to achieve,” according to Carlo Gatti, business development manager, KPS, who said the underwater effect was enhanced with horizontal LED light strips placed in a random pattern within the reveals of the KPS wall panel system.

KPS fabricated 580 Spectra Sakura panels in five pre-determined typical sizes. All unique panels were field measured to ensure proper fit at all detail interfaces. KPS began panel fabrication in November 2013 and completed installation in June 2014. The panels were installed with KPS System “A”, a dry-joint compartmentalized and pressure-equalized rainscreen system.

“We worked with the architect and the aid of CAD software to ensure that the building curve design was gentle enough so that the panels could be manufactured flat and ‘walked-on’ to the curve,” according to Gatti, who said this design approach produced a cost savings for the client. 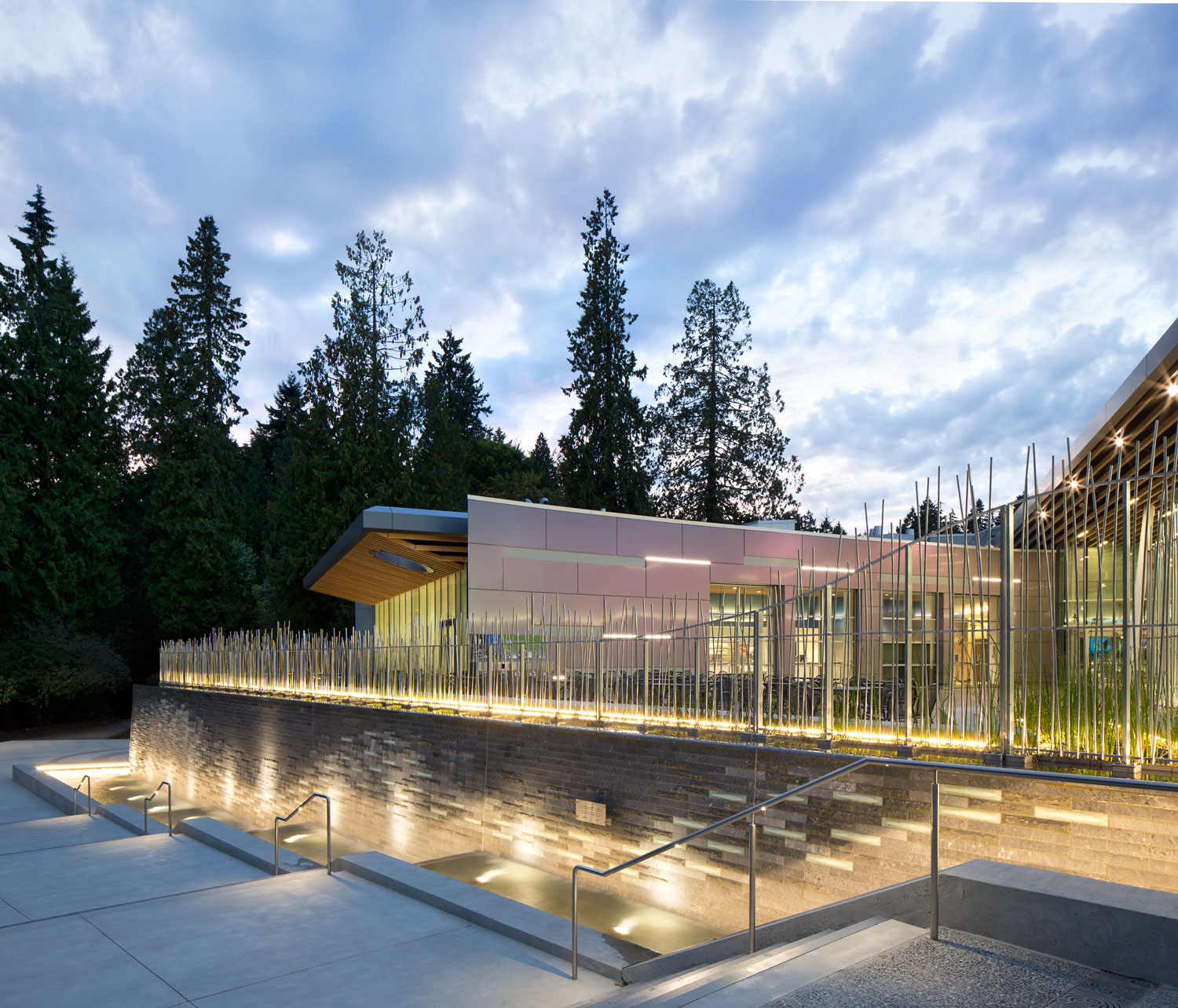 The Spectra Sakura ACM was installed primarily on the aquarium building’s eastern and western elevations, which flank the main entrance. In addition to the Alucobond Spectra Sakura, 3,600 square feet of Alucobond in the custom River Zinc Metallic color and 4mm thickness was installed on the aquarium building at canopy fascia and within circular skylight wells.

“The reaction to this project from the architectural community has been very positive regarding the unique behavior of the Spectra Sakura, which is accentuated by the gentle curvature of the walls,” said Gatti. 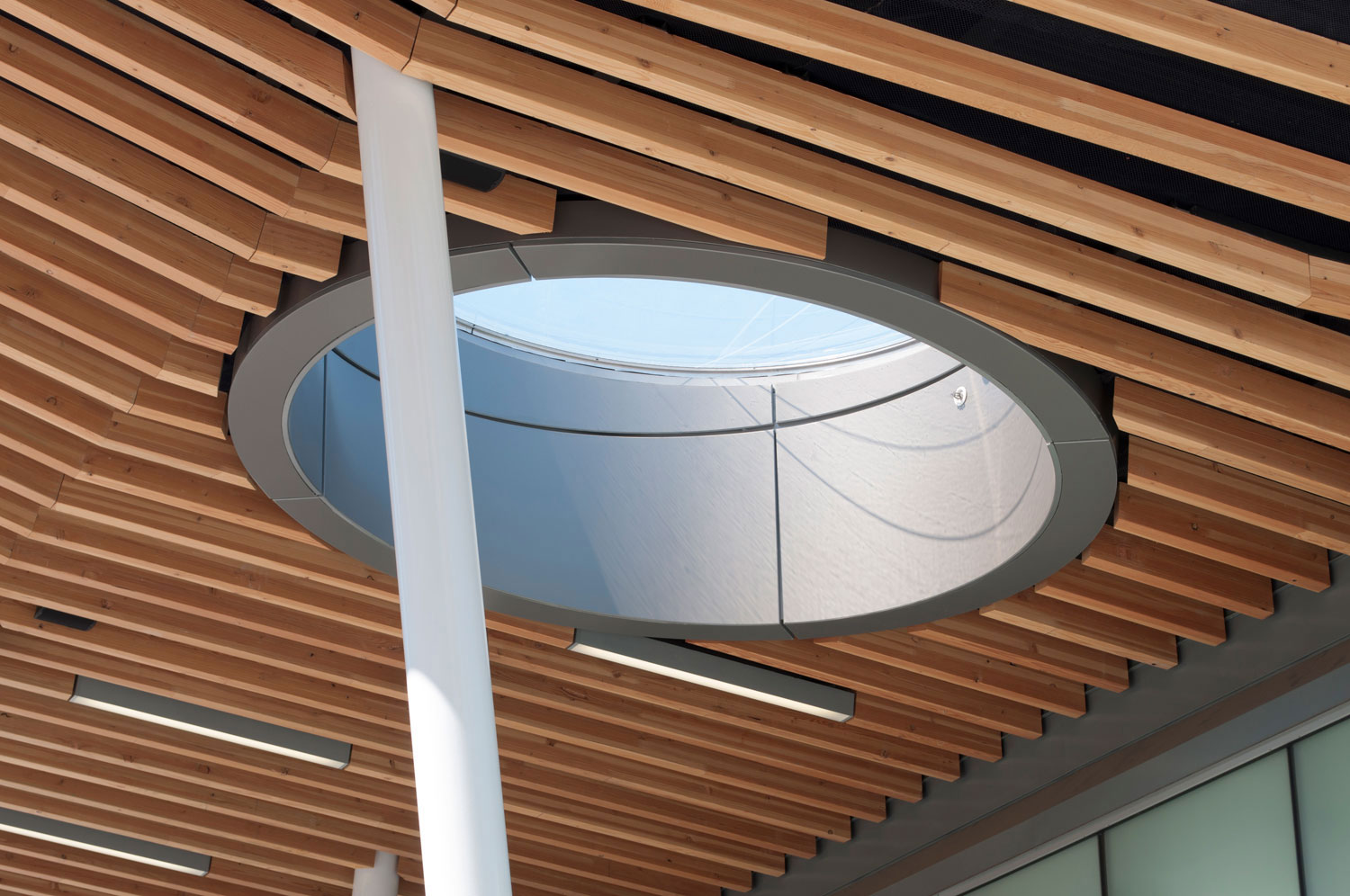 Curved walls and Spectra Sakura ACM will be utilized as unifying architectural design elements in future aquarium building projects, according to Thompson, who currently is working on the next expansion and renovation phase for the marine science center. The new building was part of the aquarium’s Phase 1 renovation and expansion, which also included extensive infrastructure updates designed to enhance the aquarium’s long-standing commitment to sustainability. Design elements in this renovation and expansion were targeted to meet or exceed LEED Canada Green Building Design & Construction Silver rating requirements.

“The Vancouver Aquarium now has a place in the city where it previously had been almost buried in the park,” said Thompson. “We are very happy with this project.”