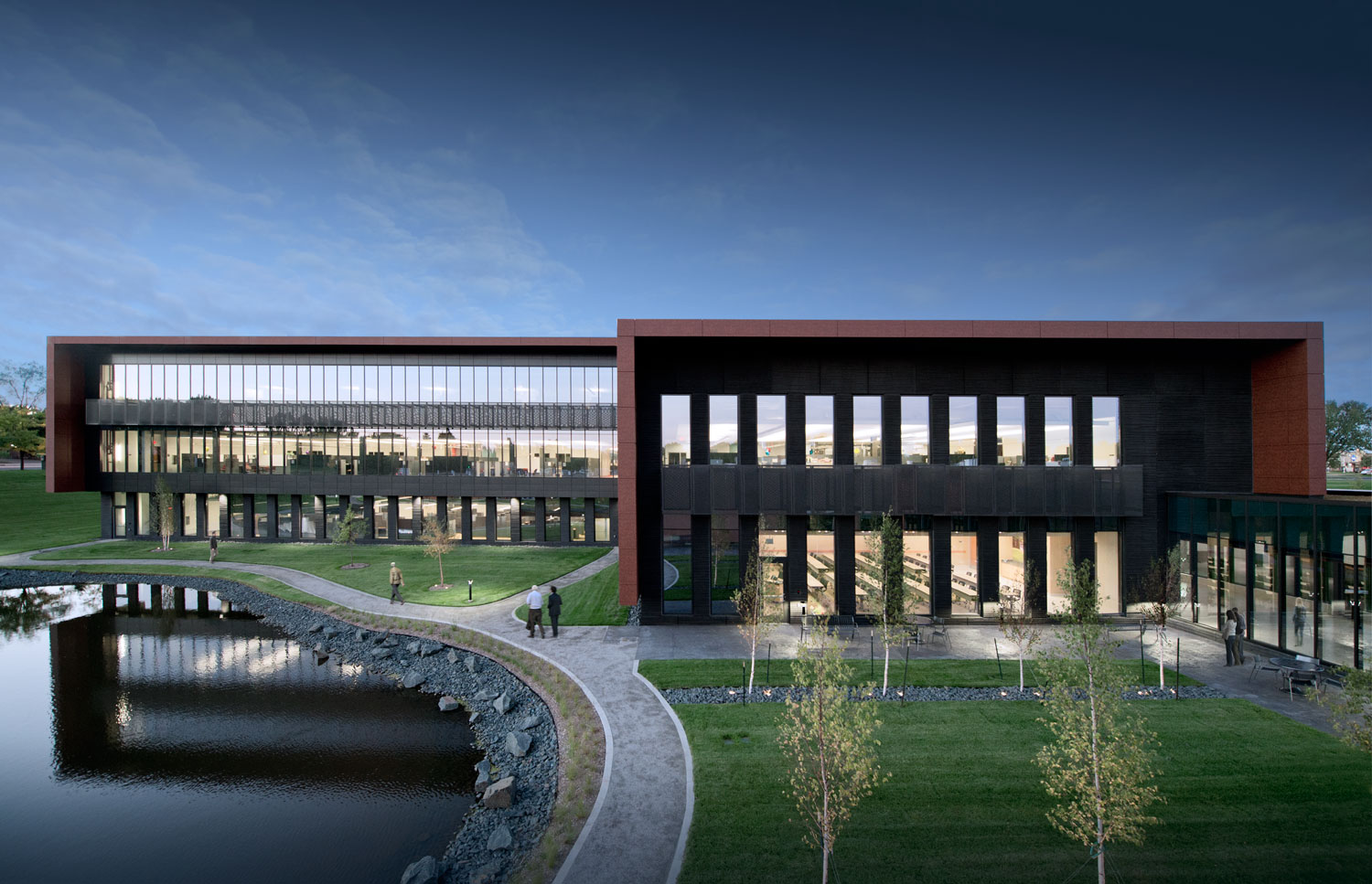 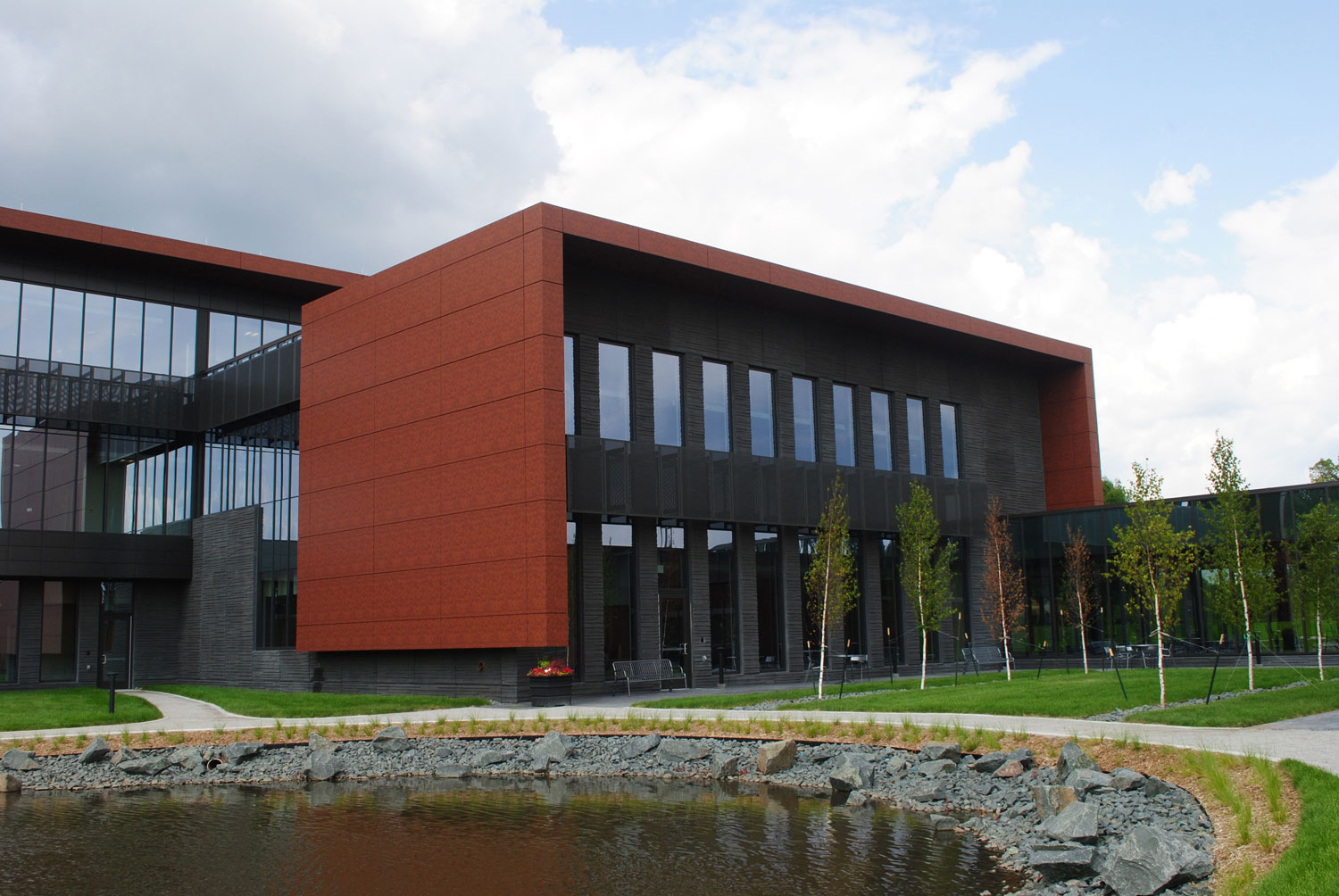 “The Alucobond forms a big shell over the building with the light color over the dark color,” said Bill Baxley, AIA, vice president, director of design, Leo A Daly, in Minneapolis. “The design team performed an exhaustive comparison of cladding materials. The Alucobond met both our performance and aesthetic requirements.”

The Alucobond naturAL in the Rusted Metal color provided Toro with the opportunity to incorporate the look of weathering steel in the building design without incurring the costs of steel cladding, according to Baxley. 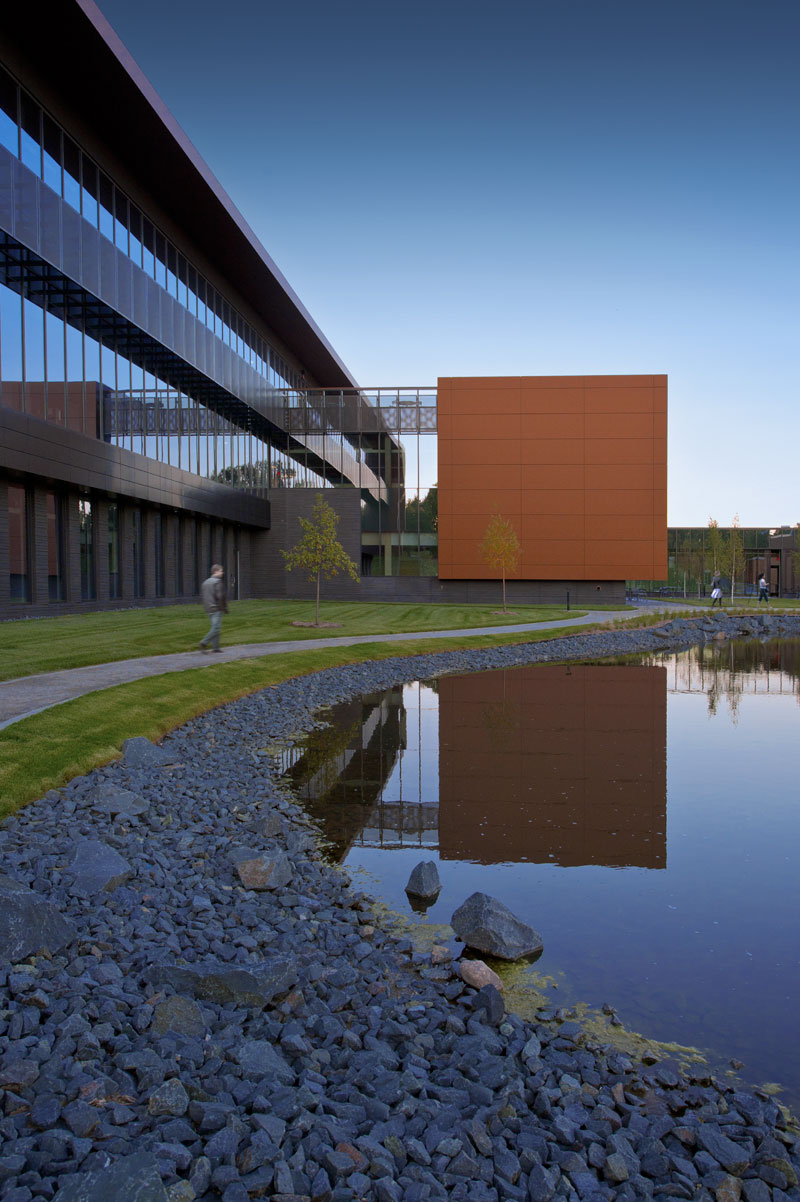 “All clients have budgets that are carefully considered when selecting a palette of materials,” said Baxley. “Toro made a sound, long-lasting investment in the Alucobond. It’s a lightweight high-performance material that cuts down on steel costs. The Alucobond has its own wonderful aesthetic, and it doesn’t drip or rust. It’s also much lighter weight.” 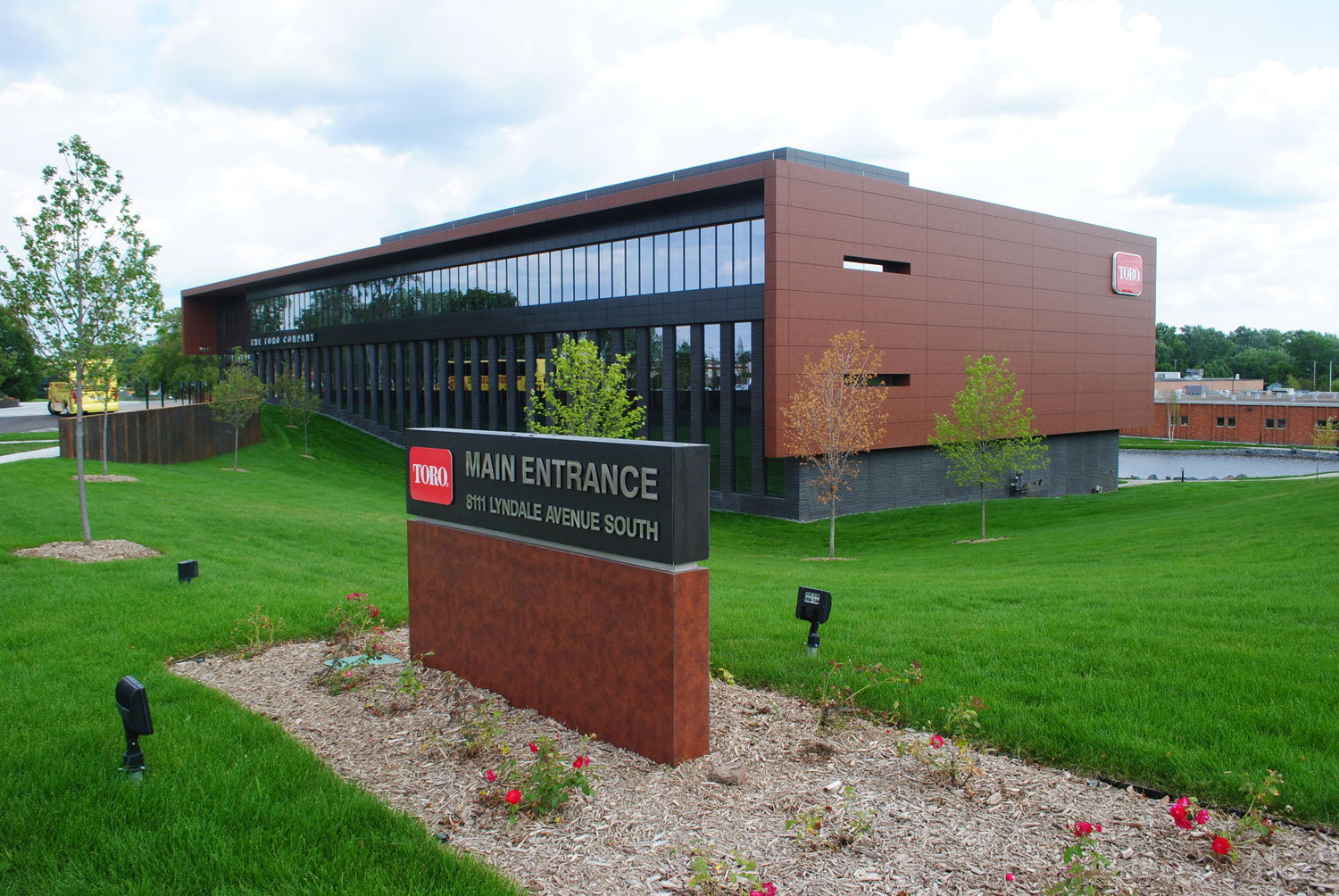 The Toro Company first opened a research and development facility in Bloomington in 1952 and moved its corporate headquarters to the site in 1962. This new building was not part of Toro’s original design specifications that called for expansion of the site’s existing research and development facility. But, after reviewing Toro’s growing product line, it was determined that a simple expansion of the existing facility would not meet the company’s needs for additional space, according to Baxley.

The new building’s design connects Toro products to campus landscapes, which serve as both product testing and demonstration grounds. The building is designed with glass-filled L-shaped sheds/galleries that are connected with moveable window-wall sections for indoor/outdoor access by both people and machines. The building also features green roof areas that demonstrate Toro irrigation products. 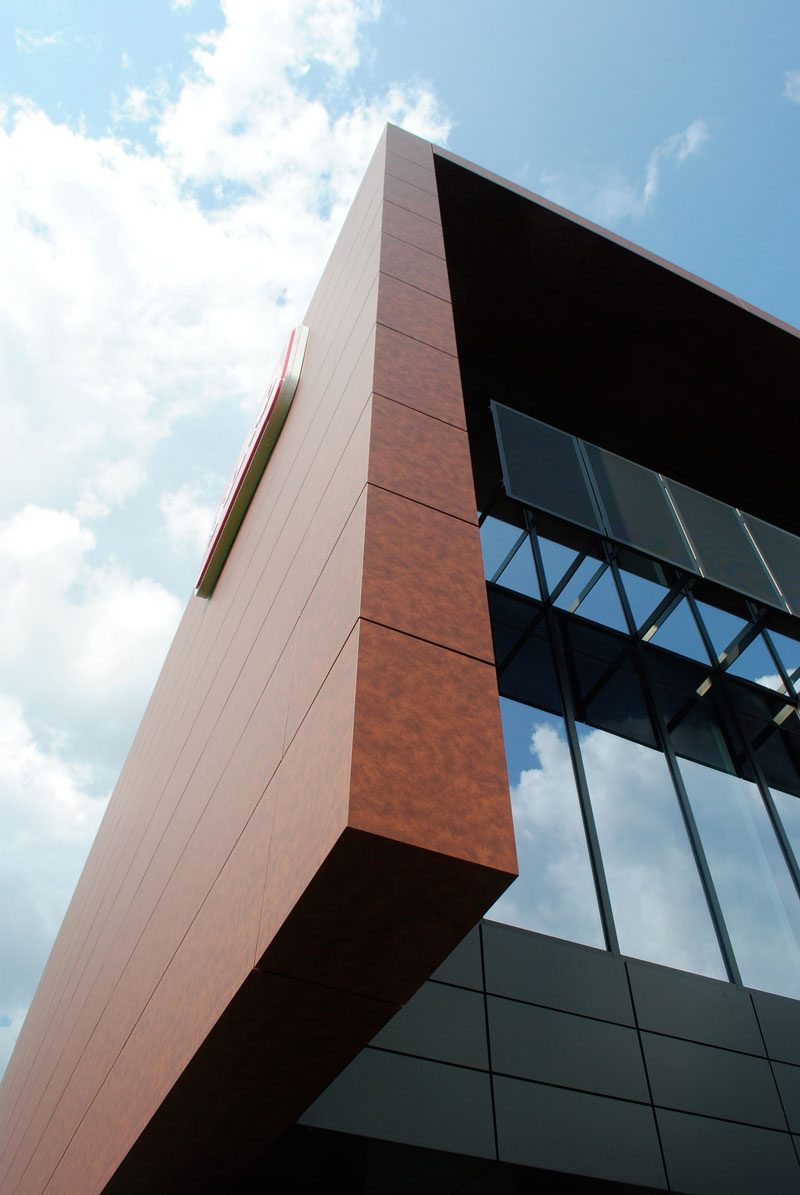 “The color selection for this building played a huge role in its design,” said Baxley. “Alucobond is a product that we know and trust. It was installed in a rainscreen application and configured in a shroud with cantilevers on the north and south sides of the building. It appears to almost be a singular piece of material.”

Ryan Companies US, Inc., of Minneapolis, which served as general contractor for the project, turned to Plymouth, Minn.-based InterClad, a specialty cladding contractor offering of Egan Co., to serve in a design-build role. Metal Design Systems, Inc., of Cedar Rapids, Iowa, worked with InterClad to fabricate the Alucobond naturAL material, which was sold by EBP, LLC, of Excelsior, Minn. The Alucobond was installed by InterClad with Metal Design Systems’ Series 20 Spline Reveal Drained and Back Ventilated Rainscreen System.

“We had three months from the start of panel fabrication to the end of the project,” said Jeff Wray, project manager, Metal Design Systems. “This project presented a lot of challenging architectural details, including wing walls where the Rusted Metal panels overhang glass and Brushed Graphite panels. InterClad provided detailed dimensions – both as wall areas became ready for cladding and per our request – to ensure a perfect fit.”

“We were under dramatic pressure to fabricate the necessary materials to get the installation completed on time,” said Showalter. “We worked with 3A Composites to speed delivery of the Alucobond materials to our facility and then immediately sent them to our router tables. We hit our schedule.” 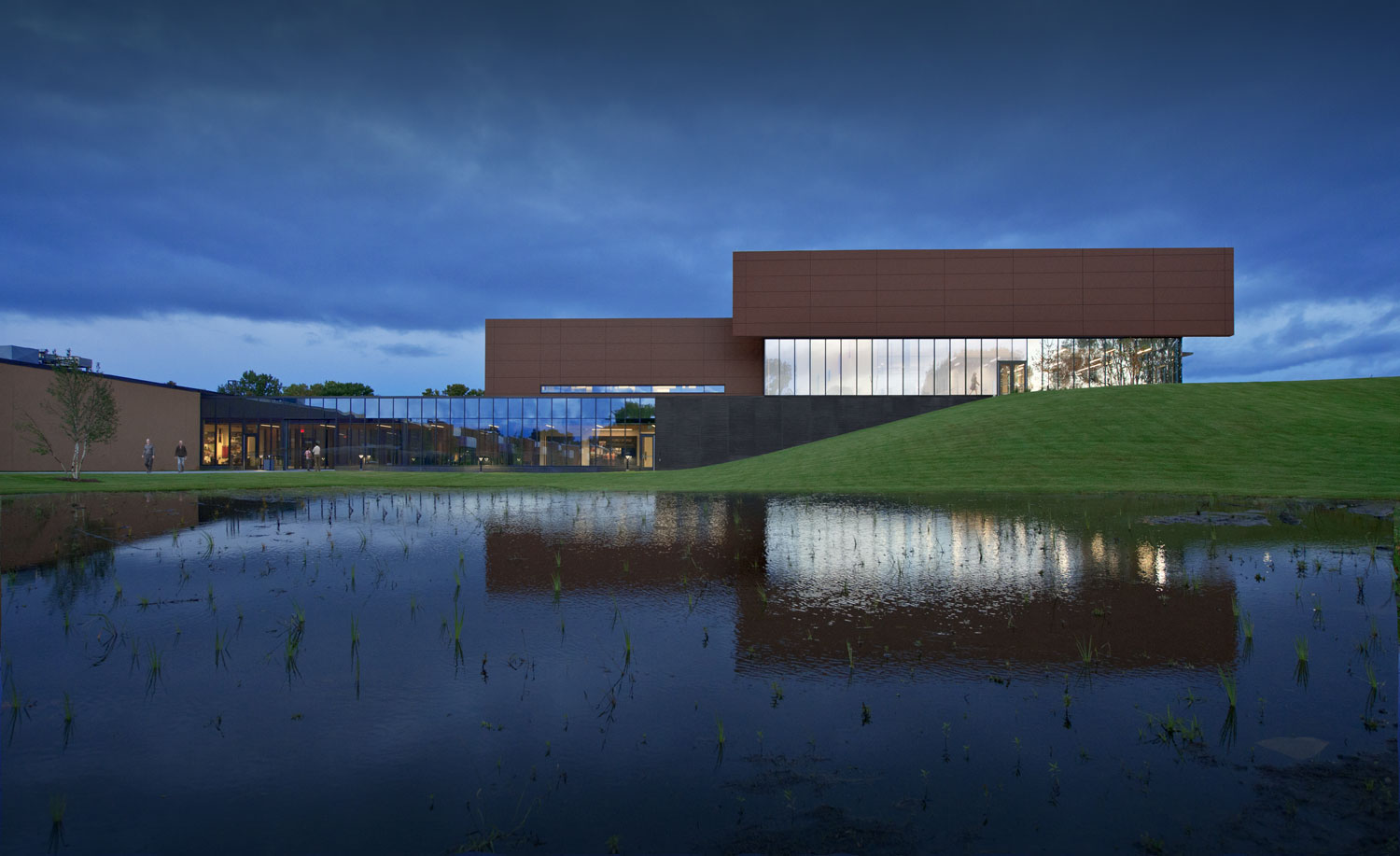 “Metal Design Systems was able to reduce panel lead times by adding a second routing crew to their production line and immediately shipping materials to the site as soon as they were completed; and, InterClad was able to reduce the overall calendar days by working overtime,” said Mark Meyer, project manager, InterClad. “The Metal Design Systems Series 20 with the Alucobond panels was a nice fit for the project. As a progressively installed open-joint rainscreen system, it could be installed immediately following the weather-barrier installation. It’s a really good wall system. …This building just shines. It’s a gorgeous facility.” 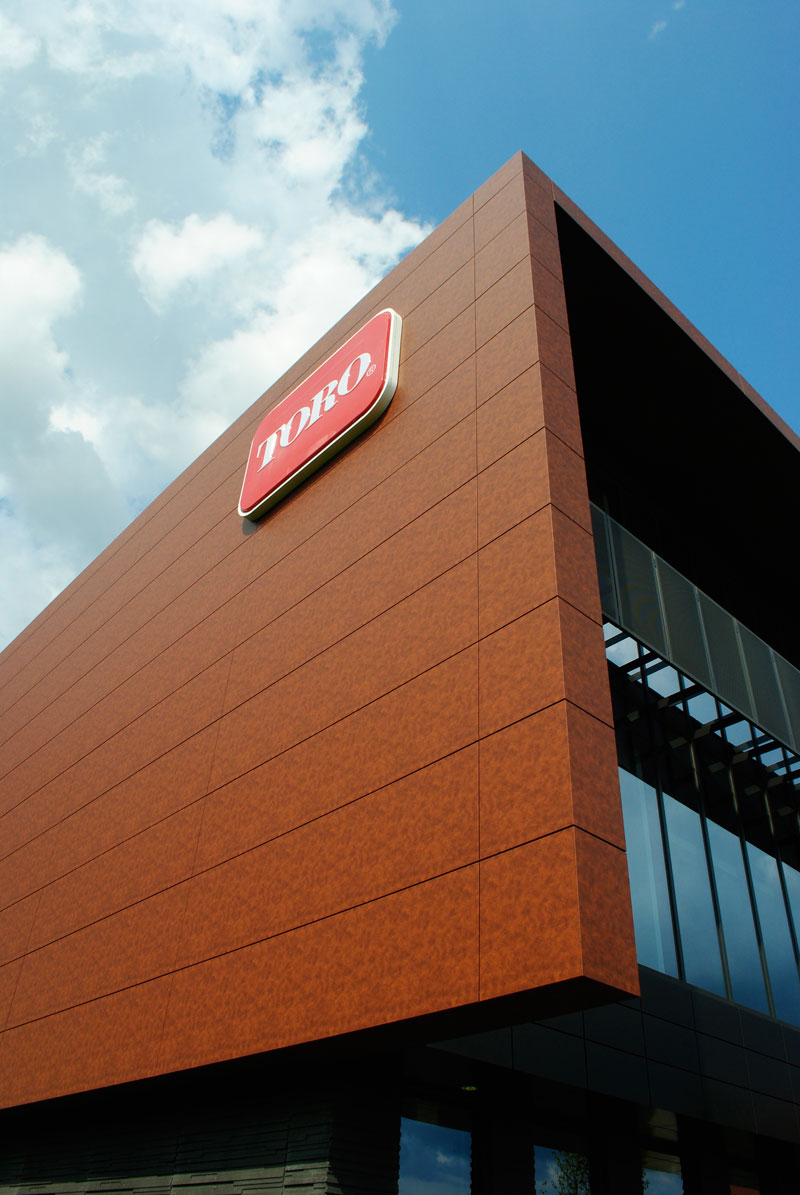 Showalter said that he often references the Toro project when promoting Alucobond and Metal Design Systems Series 20. “We’ve heard great things about this job – everything from the material colors to the fabrication and installation and just how good this project looks,” said Showalter.

This new building has changed the face of Toro’s headquarters, according to Baxley, who said both the client and design team are “impressed” with its appearance.

“Toro previously maintained a very low profile on the site,” said Baxley. “The original building was spread out and low. With this new building, you now notice Toro. It has a tight, engineered, refined aesthetic. Now, it’s a cohesive corporate campus.”

Leo A Daly received a 2014 Honor Award for The Toro Company’s corporate headquarters’ building design from AIA Minnesota, a society of the American Institute of Architects.