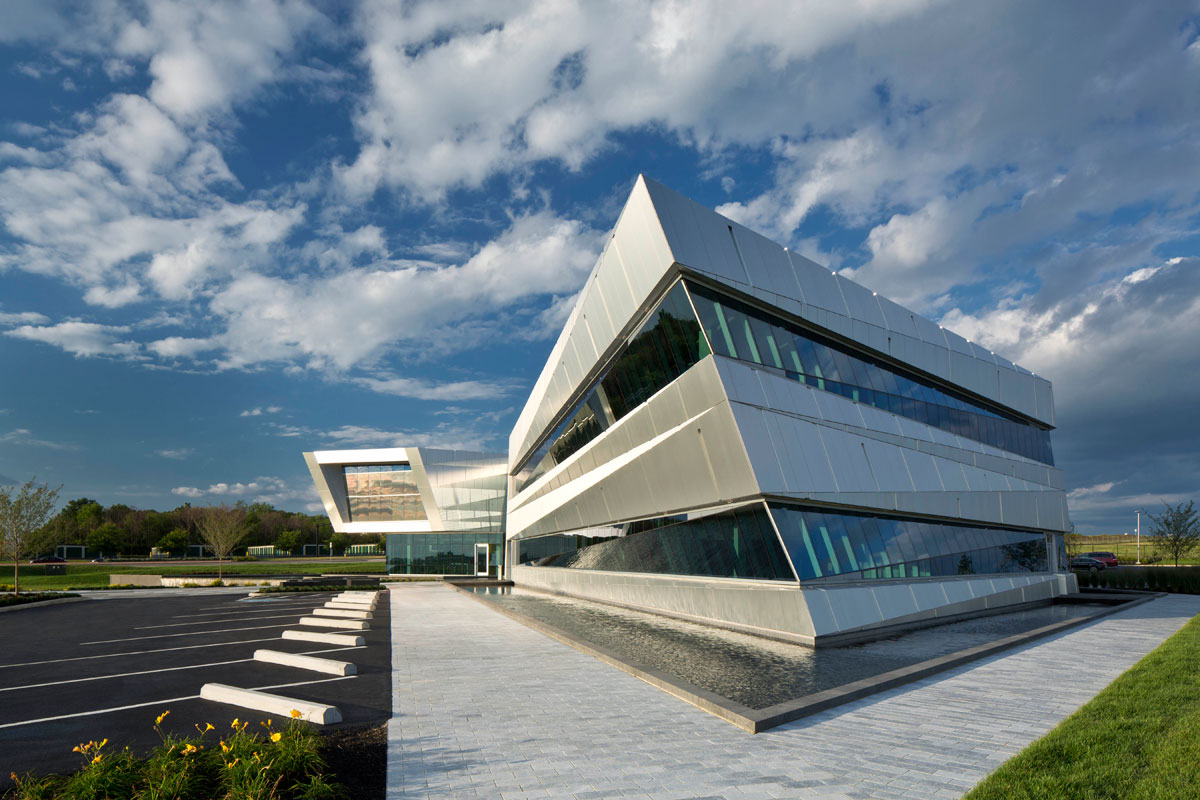 “In our first meeting with The Connor Group, we were told that executives expected this building to be a design award-winner – period,” said Daniel R. Pickett, AIA, NCARB, LEED AP, partner, Moody Nolan, in Columbus, Ohio. “We knew then that this project was going to be something special. … They wanted a corporate office building designed like nothing ever seen in the Dayton, Ohio, area.”

The $18-million 39,000 square-foot two-story building is situated on a 7-acre parcel at the Dayton-Wright Brothers Airport in Miami Township, Ohio. 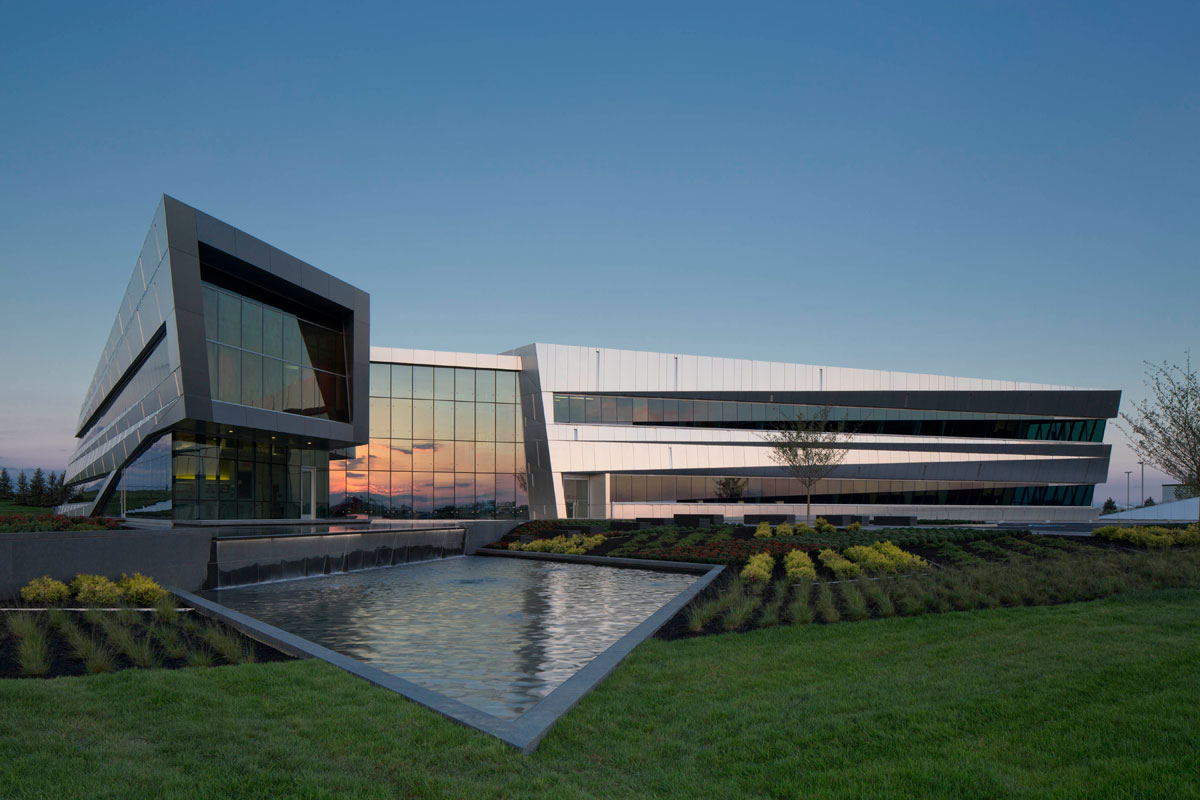 In a Moody Nolan website statement, the new corporate headquarters’ iconic design is described as a double-loaded office bar wrapping around itself and uncoiling. The building’s “outer public skin” is clad in folded and triangulated sections of aluminum composite material (ACM) and strip windows. “The triangulations allow the building to twist and lean as momentum and movement build and pull around the perimeter to the high point,” according to the architect’s statement. 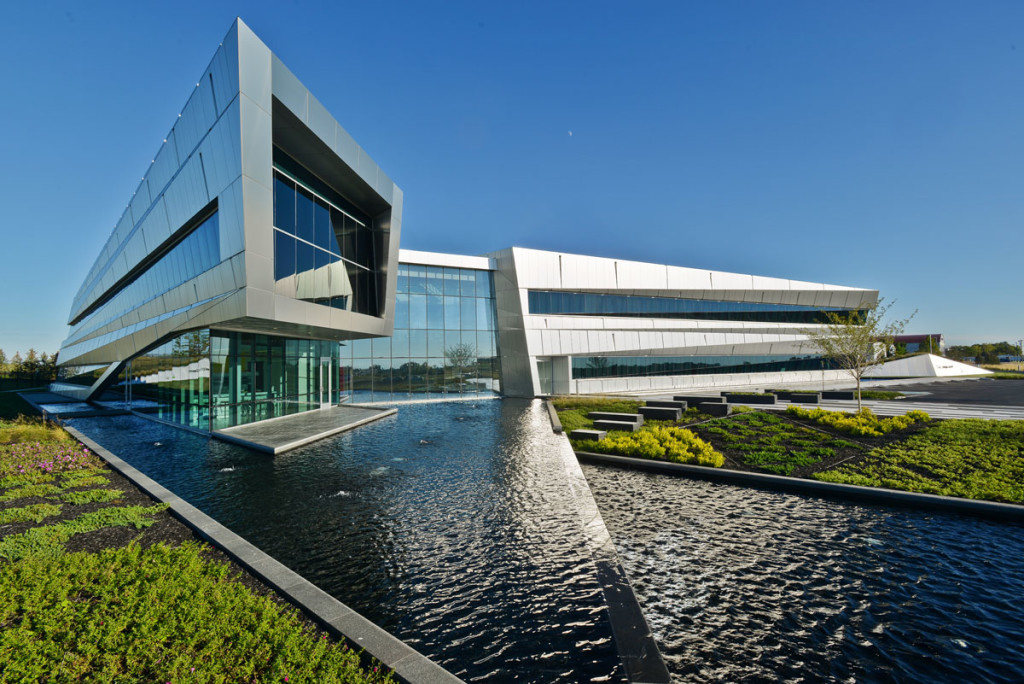 Moody Nolan worked closely with executives at The Connor Group to create this innovative design as well as incorporated ideas from students at the Charter High School for Architecture and Design in Philadelphia – several of whom participated in design charrettes.

“The basic design parameter for this building was to provide every office with access to natural light,” according to Pickett, who said virtually all employees at The Connor Group work in private offices. 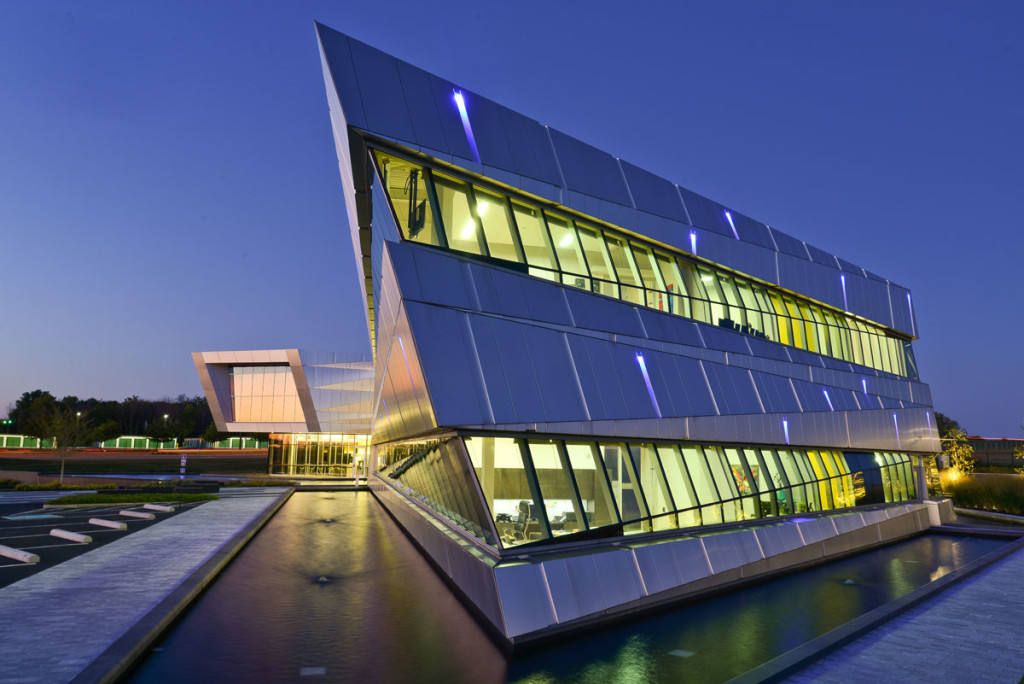 Lighting is abundant in the building’s two-story 3,495 square-foot atrium. The building features a total of 5,741 square feet of windows as well as a 2,740 square-foot skylight and includes the installation of approximately 5,000 square feet of electrochromic glass, which switches from clear to several tint levels.

Pickett said development of the building’s unique design started with a fairly simple diagram of offices arranged around a central atrium. The diagram was then altered dramatically.

“We looked at different ways to manipulate this shape diagonally to create very unique spaces,” said Pickett. “We pulled it apart, twisted it and split it.” 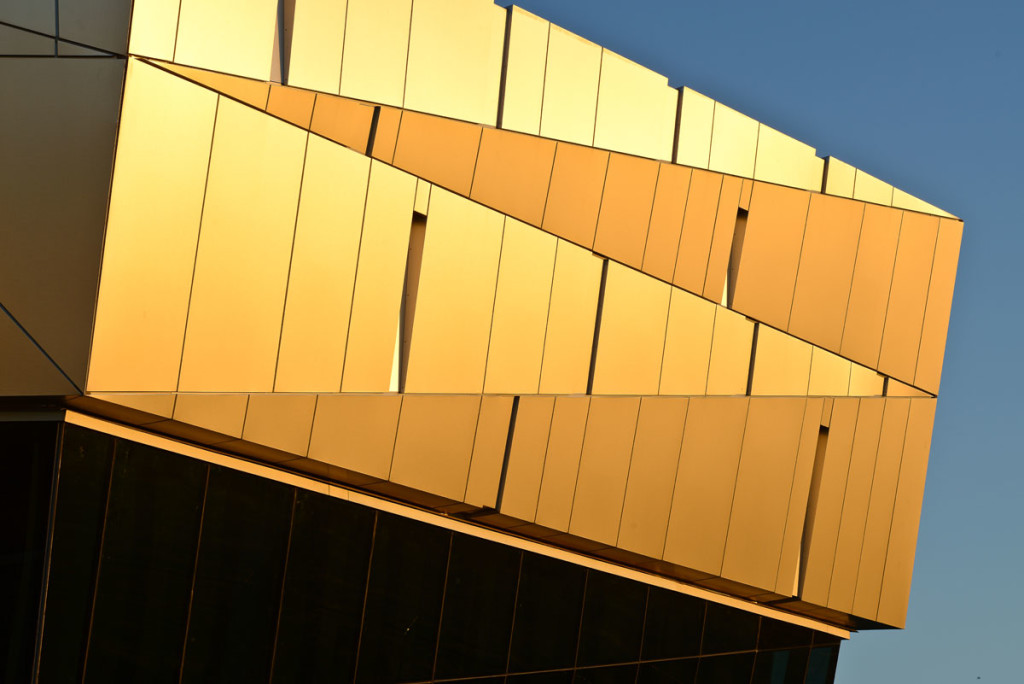 The final design features no curved lines on the exterior and few right angles. 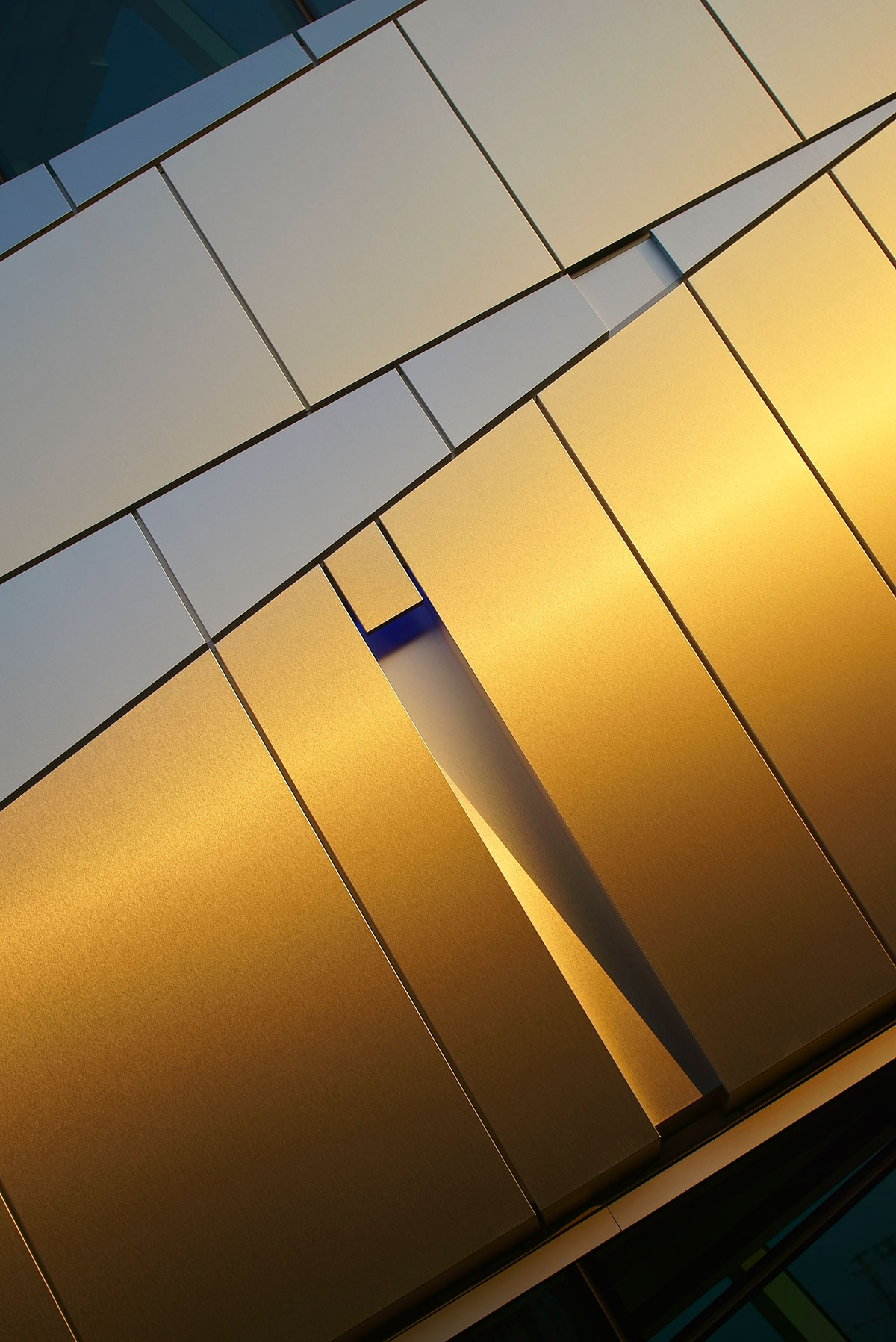 “The complexity of this design and the manner in which the building’s skin was articulated required aluminum composite material,” said Pickett. “We knew that the sun reflecting off the panels would change during the day. The Alucobond naturAL was the best material to capture the sun’s reflections.”

The Alucobond panels fabricated in triangular shapes as well the installation of uniquely sized glass pieces enhanced the idea of twisting the building, according to Pickett.

“If you look at each elevation of the building, you’ll see a band dissected by a diagonal line,” said Pickett. “This creates the perception that the metal is kinked on the diagonal. That perception extends into the glass with each piece a different size.”

Celina Glass and Royalton Architectural Fabrication have partnered for many years to complete complicated cladding projects, according to Terry Rolfes, president, Celina Glass. Messer Construction Co., of Dayton, served as general contractor for the project.

“The general contractor was familiar with our experience in completing complicated jobs; and, this was definitely a complicated job,” said Rolfes. “Some walls lean in and some lean out. There’s not one rectangular panel on this entire project. All of the panels had to be custom fabricated.” 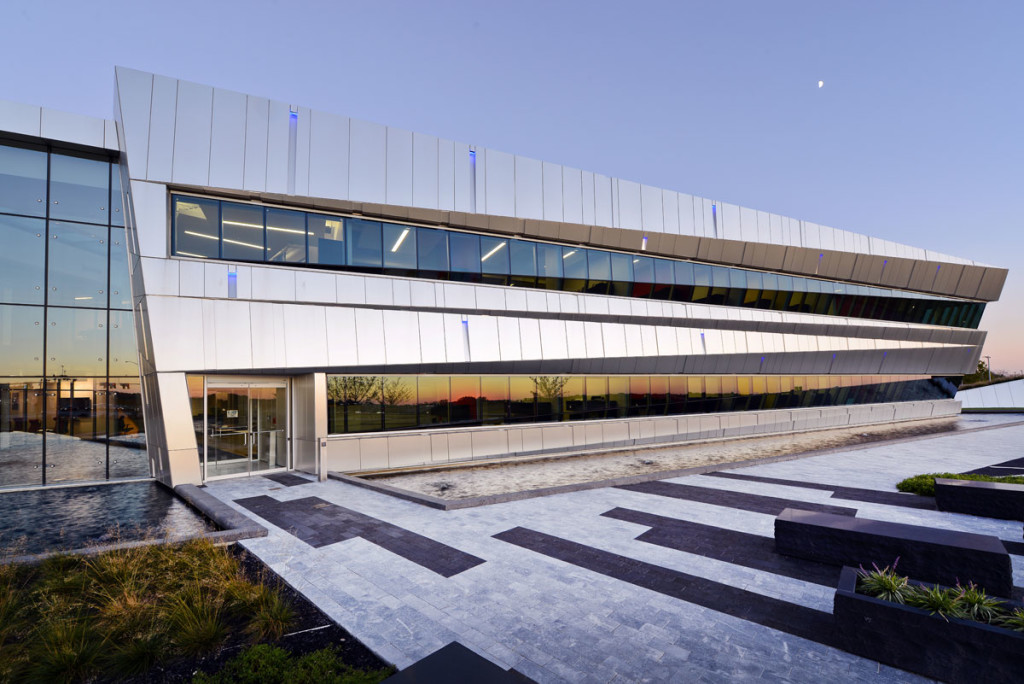 In order to ensure proper fabrication and installation of the 2,800 Alucobond panels, Royalton Architectural Fabrication created several building mock-ups, including a 6-by-8 foot jobsite mock-up. In addition to the unique configuration, these panels also featured nested lighting spaced approximately every 10 feet on the building facade.

“These panels were leaning both left and right, which required an extrusion frame to be installed behind the Royalton rainscreen,” said Stefan Winkler, president, Royalton Architectural Fabrication. “This allowed the panels to be installed in the same plane although they leaned in different ways.” 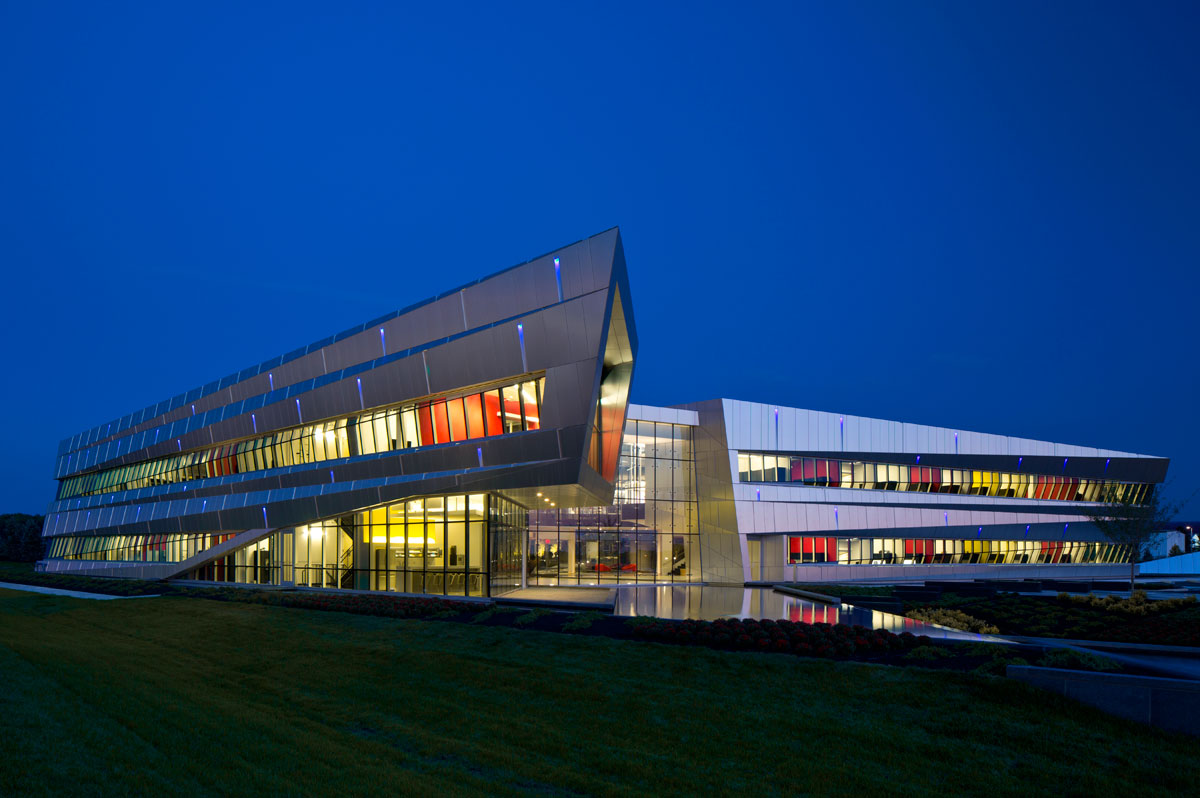 Both Celina Glass and Royalton Architectural Fabrication credit solid teamwork, communication and precise field measurement to the companies’ completion of Alucobond panel fabrication and installation ahead of schedule. 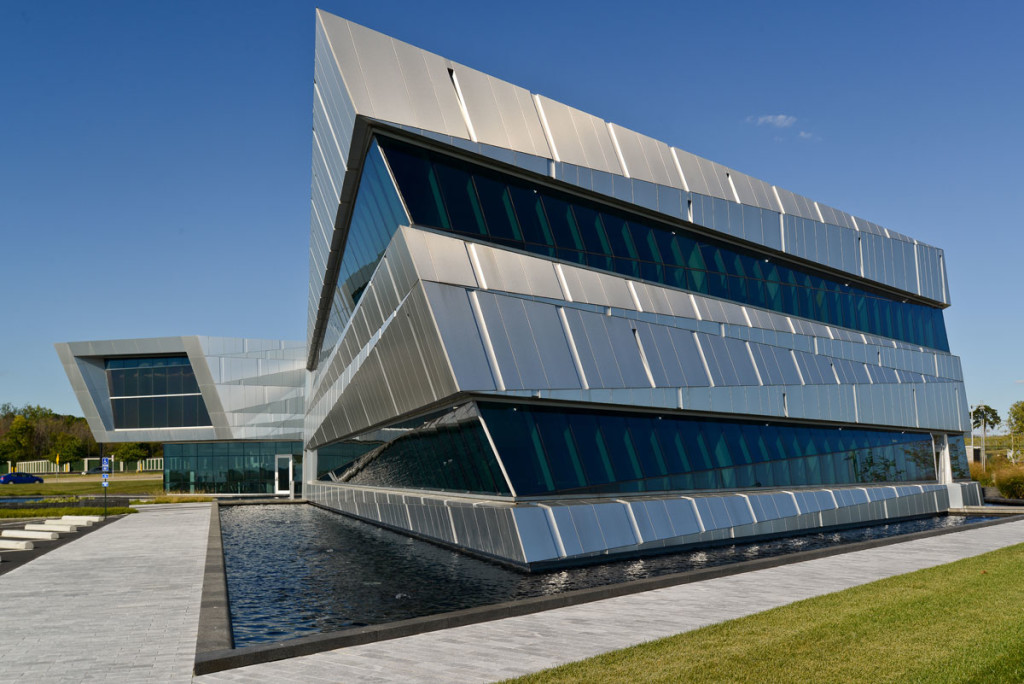 “This complicated job required the right material, the right fabricator and the right installer,” said Winkler. “We’ve used Alucobond for years because it is a very good material that is backed with the best customer service.”

Since completion of The Connor Group headquarters, Pickett said that Moody Nolan has heard many positive comments about the building’s inventive design.

“We were charged with designing a corporate office building like no other in the area,” said Pickett. “We think we exceeded our goals for creating a spectacular piece of architecture.”

Moody Nolan also met The Connor Group’s goal to create an award-winning building design. Even before ground was broken on the new building, the architectural design was awarded a 2012 American Architecture Award from the Chicago Athenaeum Museum of Architecture and Design. Following construction, the building earned a 2014 Build Ohio Award from the Associated General Contractors of Ohio.

This forward-thinking building design features green technology and has been submitted for LEED certification through the U.S. Green Building Council.