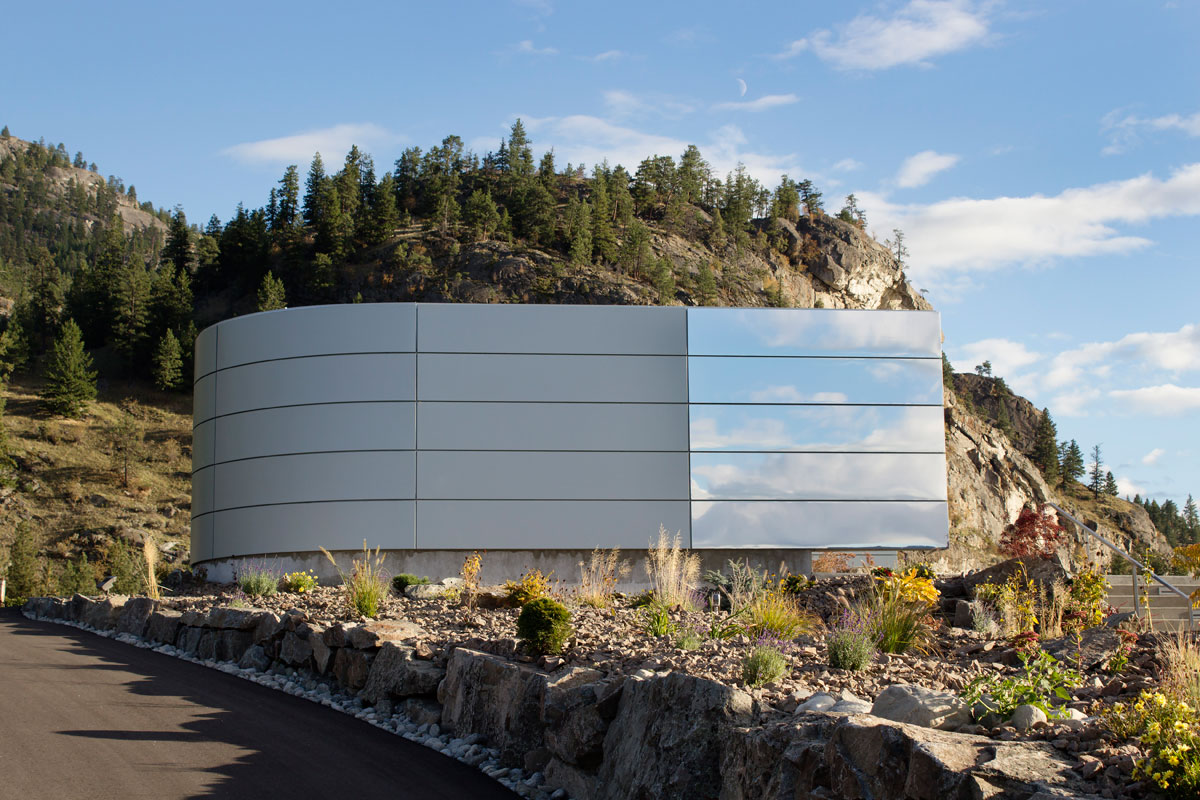 The singular focus of Painted Rock Estate Winery, according to proprietor John Skinner, had been “all about the wine” since he and his family purchased this 60-acre property overlooking the eastern shore of Skaha Lake in Penticton, British Columbia, in 2004. That single-minded emphasis has produced extraordinary results for this young winery – most recently named “Winery of the Year” in British Columbia in the 2013 InterVin International Wine Awards, which awarded gold medals for Painted Rock’s 2010 Cabernet and 2010 Syrah wines. 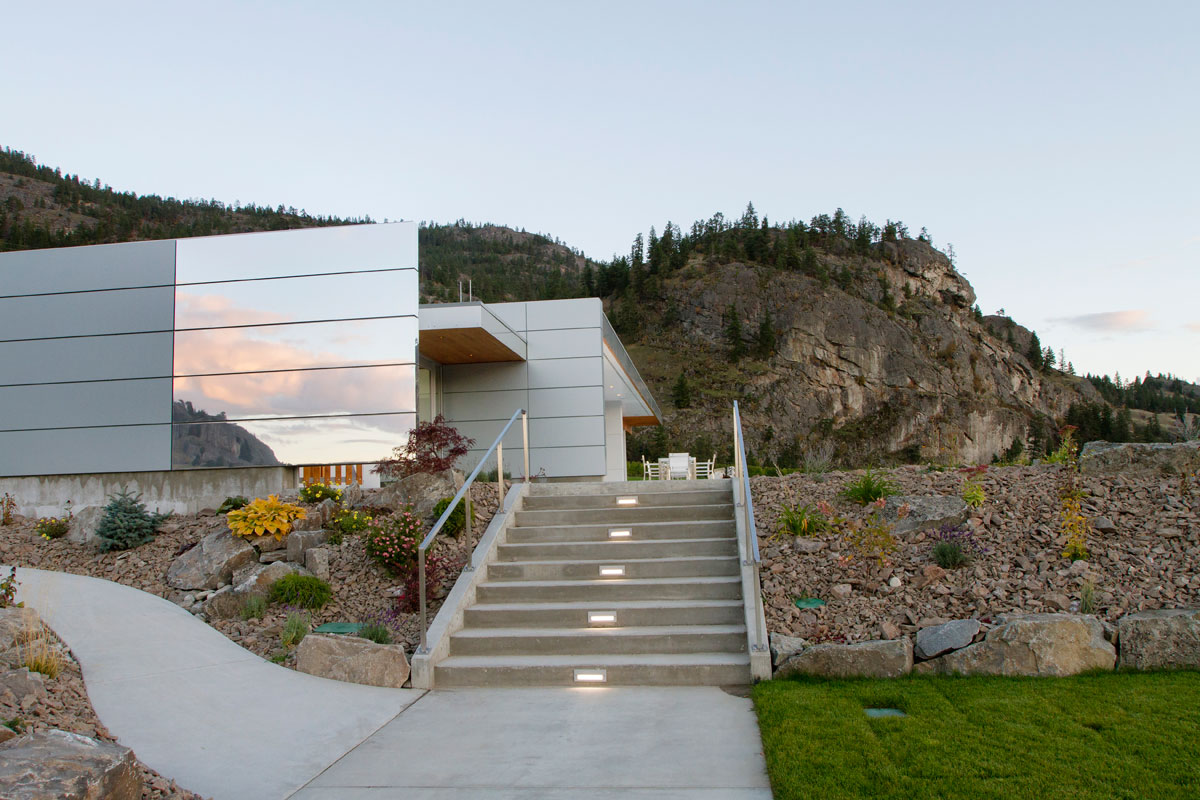 With numerous accolades for Painted Rock’s wines accumulated, Skinner decided in 2013 that it was time to focus on his plan to develop the estate as a wine-tasting and entertainment destination. The new 1,600 square-foot one-story Painted Rock Estate Winery Tasting Room – which opened in September 2013 – was designed not only to accommodate on-site retail wine-tastings and sales but as a unique destination site for weddings, banquets and corporate events.

“We wanted to build something that was worthy of the site,” said Skinner. “Previously, we reinforced the message in the community that we were all about the wine. We wanted to honor consumers and the Painted Rock community. … We chose a contemporary building design – but one that seems in place.”

Skinner has described the view from the new tasting room – which is situated atop a picturesque bluff overlooking the vineyards and Skaha Lake with vistas of nearby mountains – as “one of the most beautiful views in the world.” 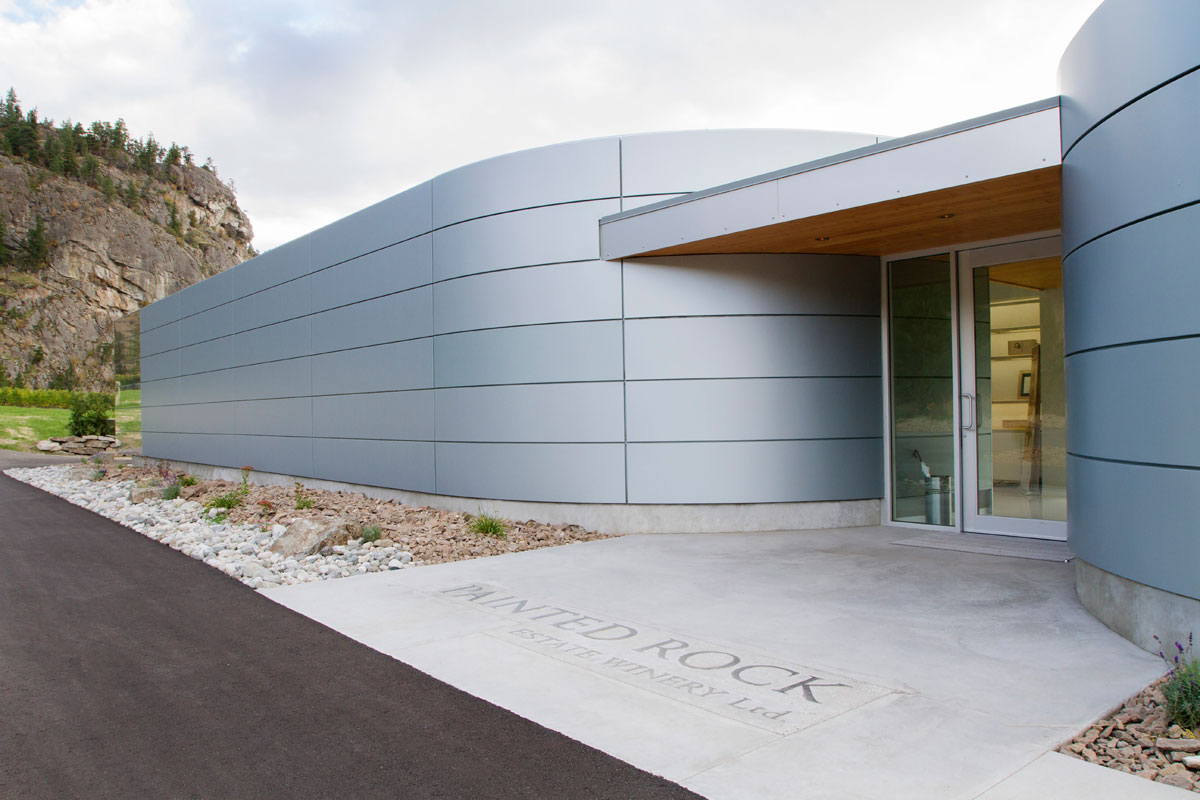 “We wanted to create a new benchmark for the property,” said Unsworth. “The building approach curtains the view to Skaha Lake and the vineyards to the west. The eastern walls draw you into the entry and forward to the view beyond. It’s a flowing form on the site and works nicely against the natural setting.”

The Alucobond panels were fabricated by Keith Panel Systems Co. Ltd. (KPS), of Vancouver, British Columbia, and installed by Laing Roofing Ltd., of Kelowna, British Columbia, with the KPS System A Plus pressure-equalized rainscreen. Penticton-based Greyback Construction Ltd. served as general contractor for the project. 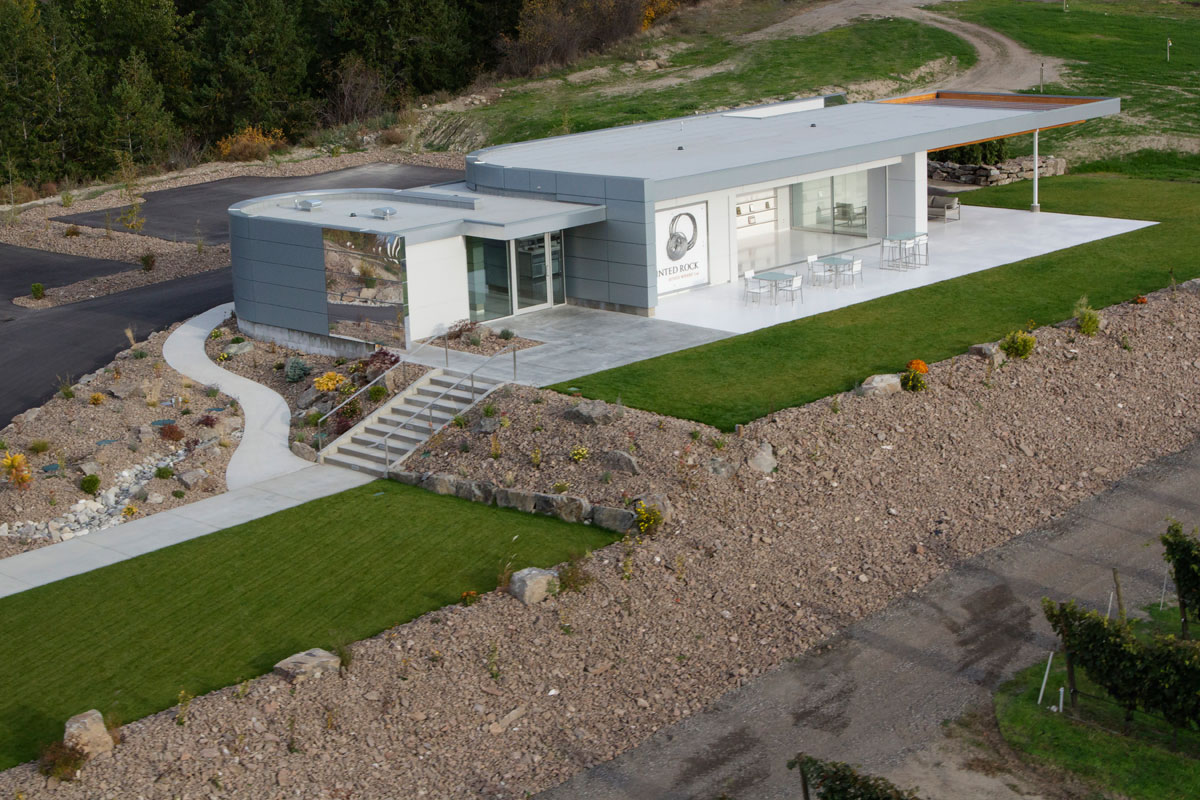 “With Alucobond, we were able to get outstanding material tolerances,” said Unsworth. “KPS managers were confident that this product was suitable for this cladding application.”

Formable Alucobond ACM played a vital role in creating the tasting room’s flowing form not only by accommodating the design’s radius curves but through its surface color.

“The bluish (Seafoam Metallic) Alucobond material features a luster that seems to change as the natural light changes,” said Skinner. “From bright sunny days to dark hazy days, the building’s appearance evolves profoundly. One day, it’s one building; the next day, it’s another. We’re very excited about it.”

The Alucobond naturAL material in the Reflect finish was used to accent two building wing areas with a mirror-like finish that reflects the area’s natural beauty. Guests can enjoy these views in the cladding as they walk to and from the tasting room and its open patio areas to the winery’s landscaped event lawn. 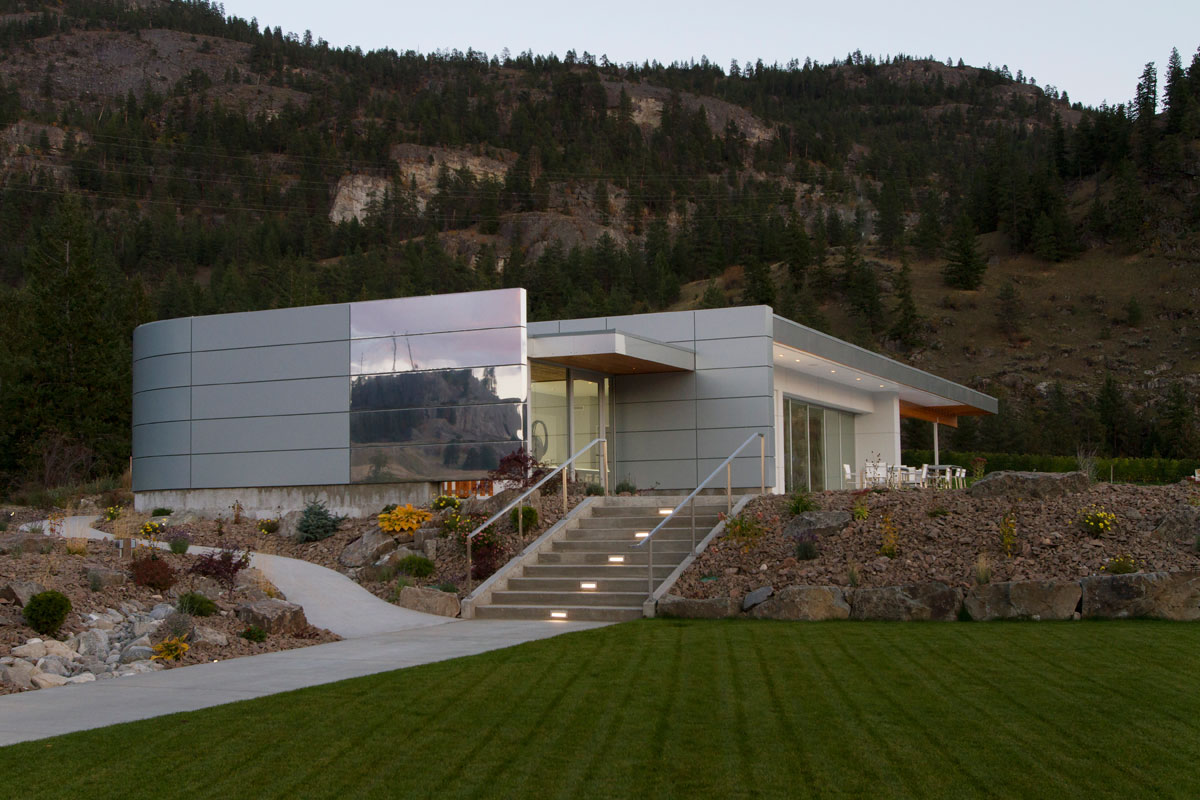 “The building wings are tipped with this mirrored surface that reflects the moonrise in the east and the sunset in the west,” said Unsworth. “In daylight conditions, it changes nicely and picks up a lot of the naturally-lit surroundings. There are fantastic views of the lake as well as the hills and mountains visible in this cladding.”

“We were very impressed with the consistency of the Reflect panel surface,” said Paul Dalzell, KPS operations manager. “We know how difficult it can be to work with mirror-finish products from past experience; but, Alucobond Reflect was extremely easy to fabricate and produced great results.” 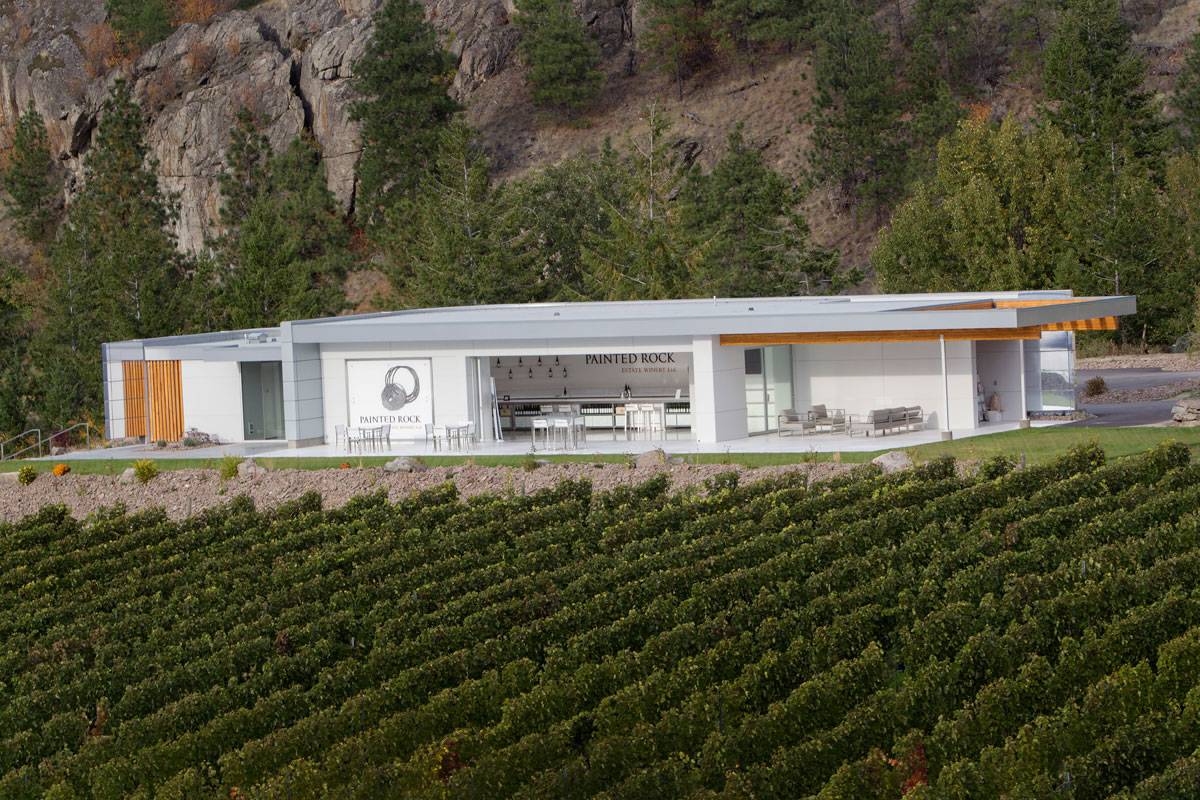 “The Reflect material will have a big impact – especially in our niche markets – because it offers the versatility and economy of Alucobond with a mirrored finish. Previously, you’d have to use expensive, heavy-gauge stainless steel to get this type of effect.”

Incorporating the Alucobond naturAL Reflect in the tasting room’s cladding was one of the reasons that this contemporary building design was selected for Painted Rock Estate Winery.

“The Alucobond and the Reflect materials were suggested for this building design,” said Skinner. “In our context, it really works. It’s beautiful. This material brings the glorious natural periphery – including the lake and the mountains – into the building. … This building is really striking. We’ve seen the immediate appeal that it has with people journeying to the grounds. It’s wonderfully appropriate for this site.” 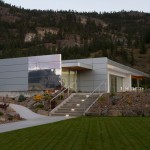 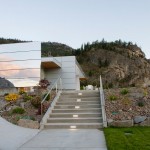 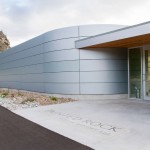 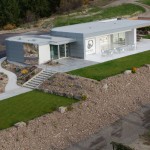 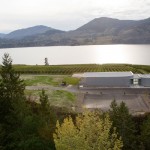 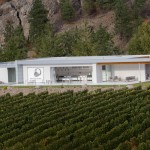 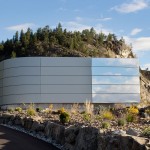