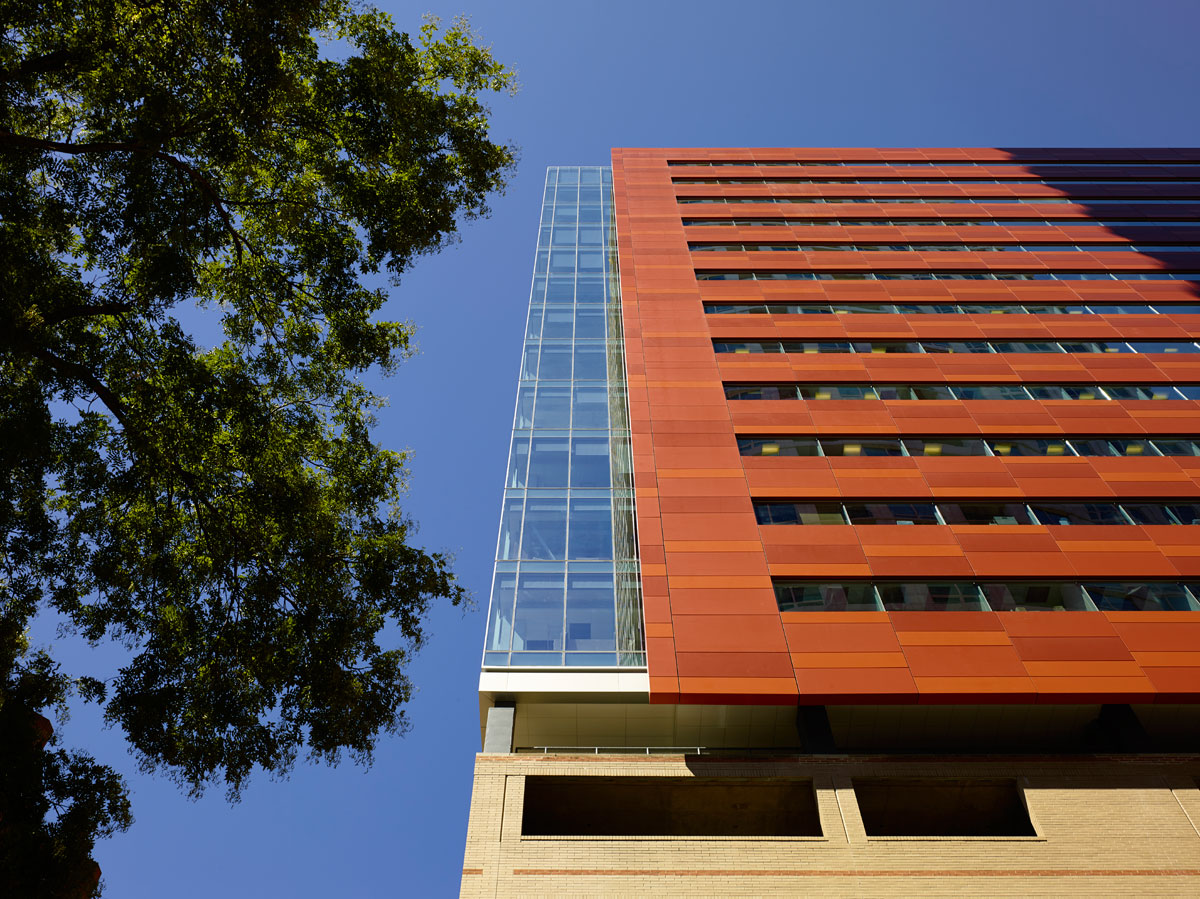 The new Penn Medicine Washington Square outpatient medical facility opened in September 2013 in the Walnut Towers property at the corner of 8th and Walnut streets in Philadelphia’s Center City with plenty of parking. In fact, this new 12-story medical office tower was built over an existing seven-story garage featuring 600 parking spaces.

Liberty Property Trust, of Philadelphia, developed the property in joint partnership with Philadelphia-headquartered Parkway Corp., which owned the garage complex and air rights. The Philadelphia-based Ballinger architectural and engineering firm was hired by Liberty to design the core and shell of the new 153,242 square-foot office building. Liberty invested $45.8 million to construct the tower. Pennsylvania Medicine managed the interior fit-out as medical offices for more than 100 providers. Penn Medicine Washington Square serves as a major hub of outpatient care for Pennsylvania Hospital – the nation’s first hospital, which was co-founded by Benjamin Franklin.

Architects were charged with maintaining the historic integrity of the Washington Square neighborhood in the new tower’s design and originally planned walls of glass and terra cotta-colored metal to blend with the area’s 19th century brick townhouses and 20th century multi-story apartment buildings. While architects worked to incorporate reddish-brick hues in the tower’s cladding, they also wanted to make the hi-rise pop on the city’s architectural landscape.

They achieved this unique effect in the building’s façade with 90,000 square feet of Alucobond® Plus aluminum composite material by in three custom colors and three distinct surface finishes installed in an alternating color pattern generated via a computer algorithm. 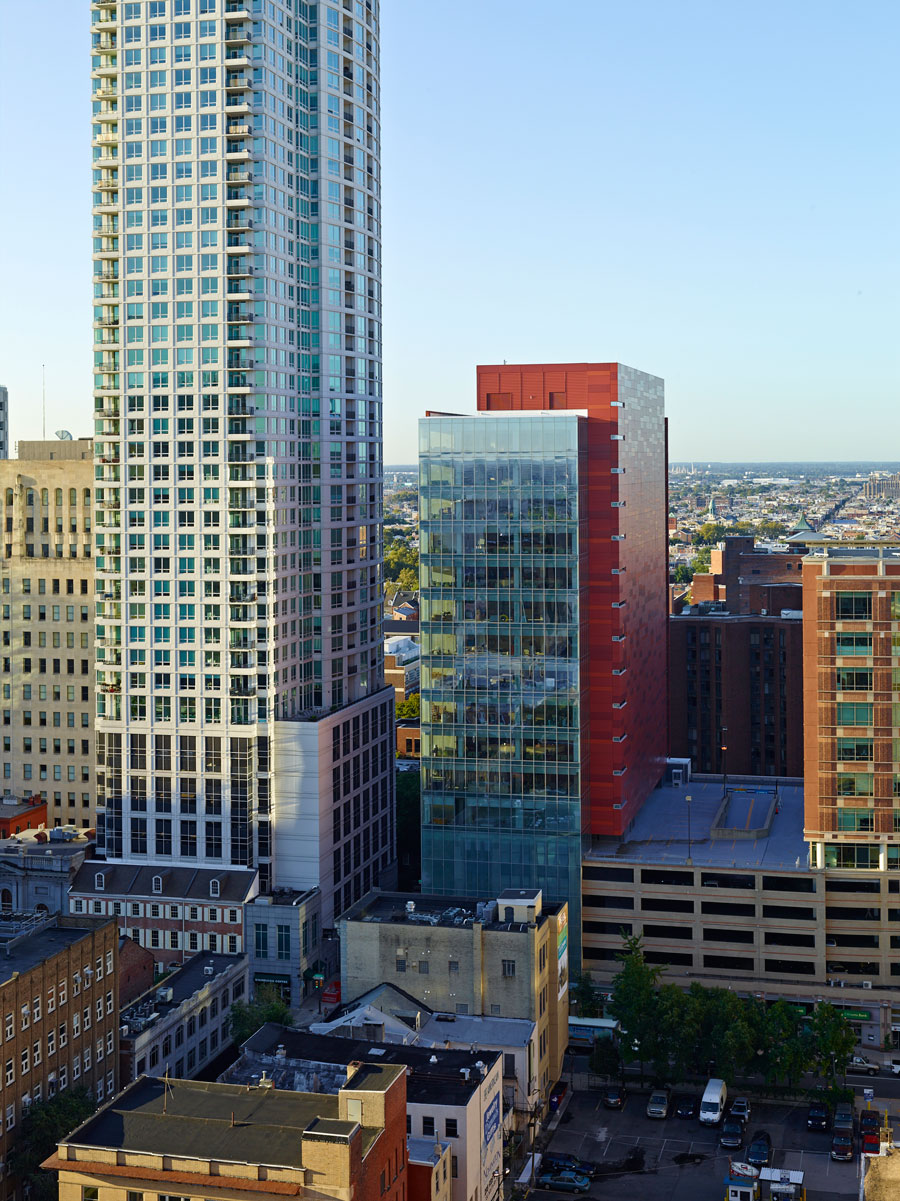 “Alucobond was our metal panel of choice because we had used it on a number of other projects with great success,” said Thomas Lehman, AIA, project manager, Ballinger. “It was designed to be installed in a rain-screen system that had worked well on previous projects. We wanted to push the envelope with custom colors and finishes so that we could break up the western façade, in particular, because it has very few windows…We wanted to break down the mass of the building with color and reflectivity. The characteristics of these panels change as environmental conditions change from sunlight to rain.”

Lehman said the algorithm program was used to generate a non-repeating facade color pattern in which the colors and finishes were evenly distributed across the building.

“While we originally thought we’d utilize a terra cotta-colored metal panel to match the area’s historic brick architecture, the architects changed it up a bit to create visual interest,” said Bill Fisher, AIA, LEED AP, senior project manager, Liberty Property Trust. “Not every brick is the same color, so they came up with a tri-color approach for the metal panels.”

“In the end – after completing the extensive color selection process – the building not only looks good by itself, it looks good when you step back and view it in the context of the entire neighborhood,” said Fisher. “The Alucobond provided us with a multi-colored lightweight panel that could maintain the architectural context of the neighborhood.”

Added Lehman: “While this was not the original color of the building, the client was much more excited about the oranges and reds that offer a pop of color in the landscape. This building’s striking color is noticeable from across the city. It’s a stand-out building.” 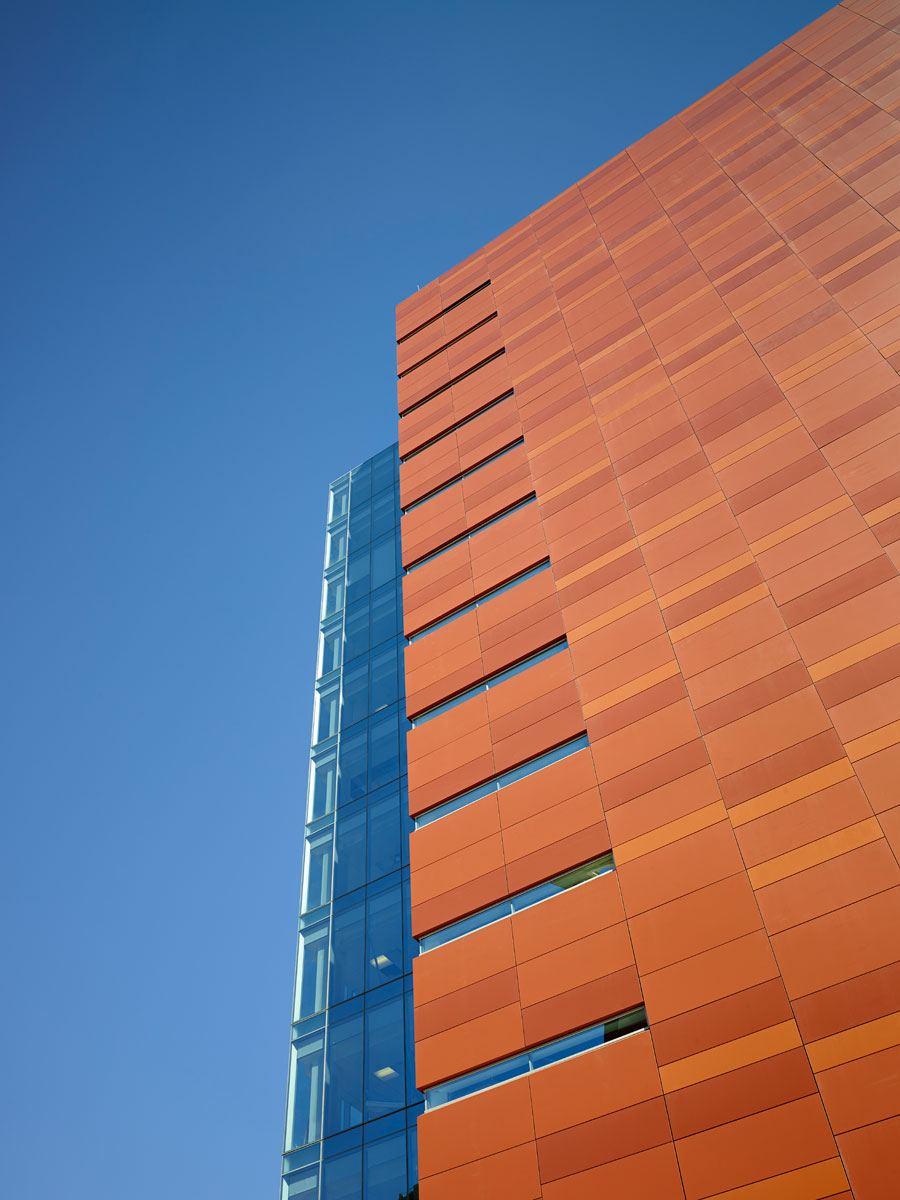 Original air rights in this highly congested urban area designated that an apartment building be erected above the parking garage. In order to accommodate Pennsylvania Medicine medical offices, according to Fisher, the footprint of the existing structure needed a larger floor plate, which required that the building be extended out over the garage and that the Alucobond panels be installed in a rain-screen system.

The Alucobond cladding was built into a prefabricated stud-framed system that included super panels measuring up to 10.5 feet wide by 42 feet tall by Pittsburgh-headquartered Wyatt Incorporated. The prefabricated panels were manufactured in Wyatt’s Monessen, Pa., facility, transported to Philadelphia, and installed with Wyatt’s proprietary hook and pin rain-screen system during an eight-month timeframe.

Wyatt worked with general contractor LF Driscoll Co., LLC, of Bala Cynwyd, Penn., to quickly enclose the building by coordinating installation of the prefabricated Alucobond panels as concrete was poured and set on each building floor. The super panels – which weighed approximately 8,000 pounds each – were raised to the building floors with the crane used to erect its steel beams. The panels were attached from inside the building by Wyatt employees.

“These panels were fabricated and installed without a hitch; our tight construction timeframe was met,” said Fred Episcopo, president, Wyatt Incorporated. “We were very happy with the custom Alucobond colors. We appreciate that the color coil-coating process is completed by 3A Composites in its (Benton) Kentucky facility where it can be better controlled. We like the fact that Alucobond is made in the United States and that it can be made available for pickup, if we need it.”

As a completely recyclable construction material, the Alucobond cladding contributed points to this LEED Certified Building under LEED Core and Shell Development, version 2009. The Penn Medicine Washington Square tower features a green roof planted with sustainable sedums and metal screening designed to cover roof-top mechanical units. Both features were incorporated into the design in response to concerns of nearby apartment dwellers, according to Lehman.

“Residents in The St. James apartments are very happy with what they see out of their windows,” said Lehman. “The building owners are happy with the facade design and that we’ve created something interesting to see. This is a very handsome building. The Alucobond is really beautiful. … This building’s unique design feature is the Alucobond material and what it offered in terms of colors and finishes. We painted with Alucobond.” 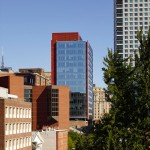 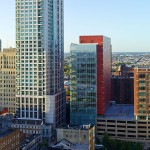 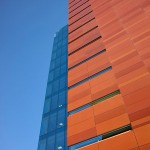 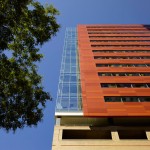 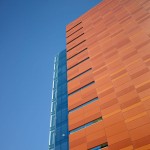 DISCLAIMER: The following listed samples are not what was used in the project above. Instead, we have suggested several similar looking finishes below.