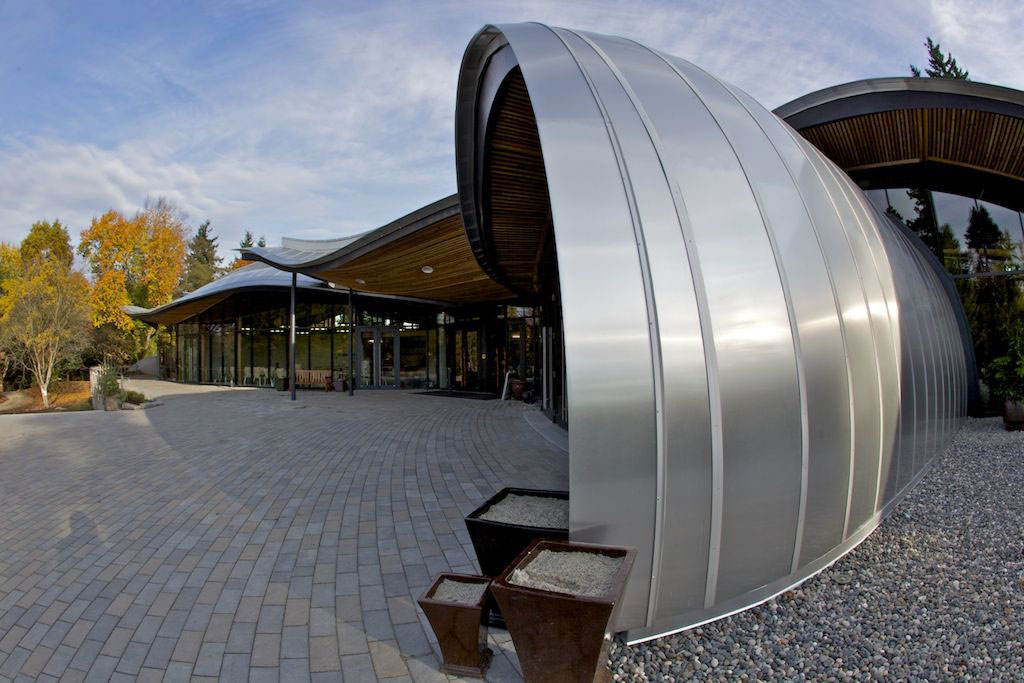 When design of the VanDusen Botanical Garden Visitor Centre was awarded to Perkins+Will Canada in late 2007, architects were challenged to create a building that not only would increase visibility for and attract more visitors to the approximately 54-acre internationally recognized garden in downtown Vancouver, British Columbia, but also meet the highest goals in sustainable building design.

Officially opened in October 2011, the $21.9 million (Canadian dollars) one-story 19,000 square-foot  Visitor Centre – which houses a café, library, volunteer facilities, a garden shop, office space and flexible classroom spaces – achieves both goals with an iconic design reflective of the organic forms and natural systems of a native orchid. Submitted for LEED New Construction v 1.0 Platinum status, the Visitor Centre also will be submitted to the International Future Living Institute’s Living Building Challenge – the most stringent measurement of sustainability in the built environment. The Visitor Centre serves as a public face for the City of Vancouver’s initiative to be the “Greenest City in the World” by 2020. 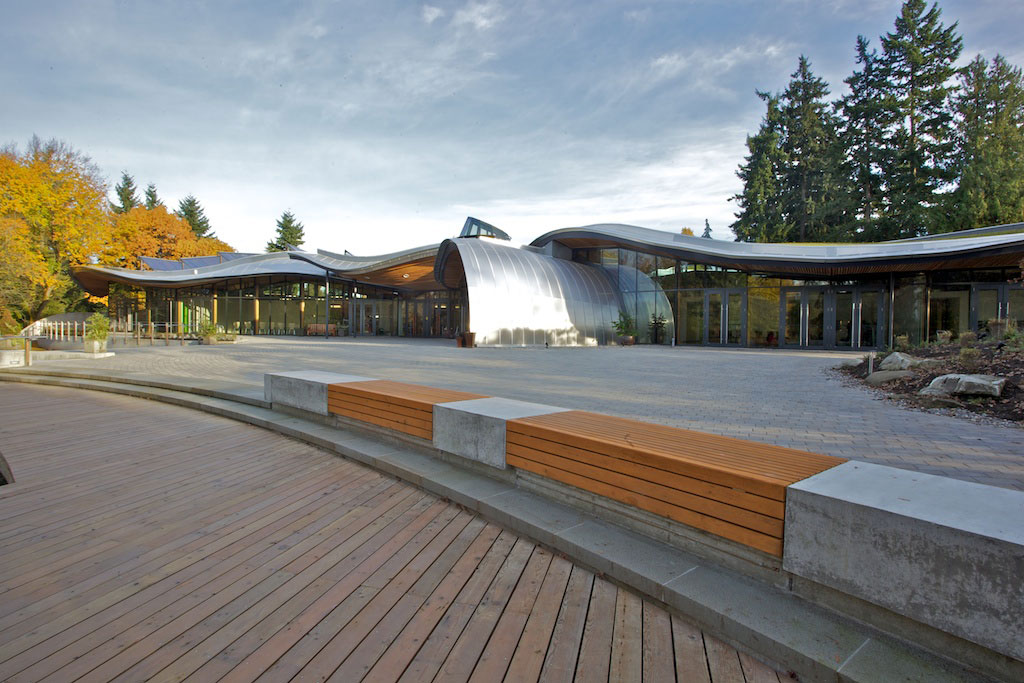 “We worked in a design charrette that included members of the Vancouver Board of Parks and Recreation, user communities and volunteers to determine their needs and wants,” said Harley Grusko, IA-AAA, LEED AP BD+Cah, architectural designer, Perkins+Will Canada in  Vancouver, British Columbia. “One of their goals was to attract more visitors with a bold agenda to triple visitorship. They wanted architecture that would enable more visibility because the existing buildings for the garden entry were hidden from the road by trees. From our perspective, we wanted to give them something iconic. Keeping in mind the garden setting and the group’s bold desires, we looked for inspiration to guide this project to make it iconic and as sustainable as possible.”

The building’s unique orchid design was developed in collaboration with Cornelia Hahn Oberlander, a premiere Canadian landscape architect based in Vancouver, British Columbia. Both Grusko and Oberlander were inspired by the close-up plant images of German photographer Karl Blossfeldt (1865-1932).

“We both were captivated by his image of an orchid,” said Grusko. “We were inspired by its quite curvaceous form and its meaning in relation to this project’s sustainability goals. A flower captures energy from the sun and doesn’t produce waste.”

Growing from an architectural oculus, the orchid design was achieved with “undulating green roof ‘petals’ that float above rammed earth and concrete walls,” according to an architect’s statement. “These petals and stems are connected by a vegetated land ramp that links the roof to the ground plane, encouraging use by local fauna.” 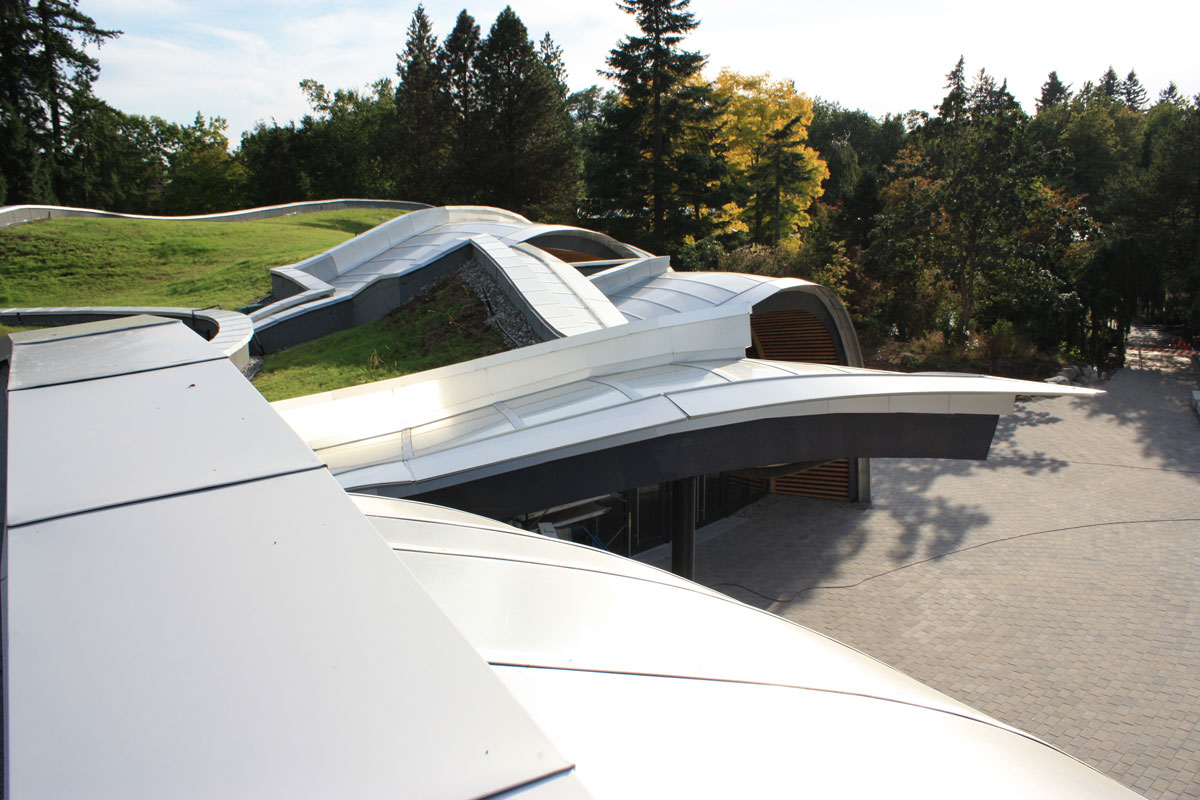 “It’s a shift in thinking in how to design buildings with materials that appear more raw-like in nature, so we limited our material palette,” said Grusko. “We wanted raw aesthetics. In terms of its visual presence, the Alucobond offered the look of raw aluminum that attracted us. We wanted aluminum for the roof edge because we knew it was going to capture the eye.

The detail around the perimeter of the roof was extremely important. We needed to find a material that could bend in a couple of directions at the same time. We also needed a fabricator who was willing to try to do this.”

Architects created the building and roof design with Rhino 3D and Autodesk Revit 3D modeling software. The roof was built with wood, with portions of it covered by Alucobond. Five of the orchid-design “petals” feature Alucobond, including one unique petal that starts out as the roof and then dramatically drops downward in a half-barrel shape to the ground.

Doug Dalzell, general manager, KPS, said the company was approached by Perkins+Will Canada and general contractor Ledcor Group of Companies, of Vancouver, British Columbia, early on in this project to serve in a design-assist role. 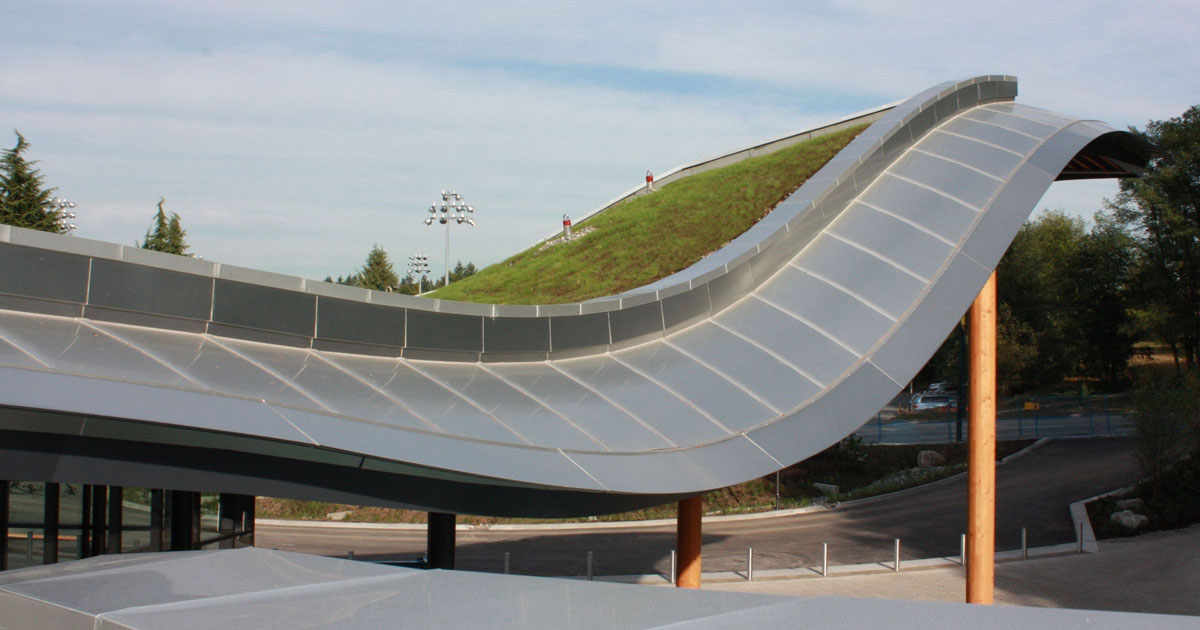 “Our challenge was not to make art out of metal but to cover art (the building) with metal and maintain its shape,” said Dalzell. “The building was made out of wood that could be shaped and glued to assist in creating all of these forms. We used our technology, CAD software and shop equipment to develop an understanding of this building’s form. A decision was made that Alucobond would be the best material to achieve this three-dimensional challenge. We’ve done more than 3,000 projects with Alucobond and know that it can be ‘alive’. The material had to go up and down and sideways at the same time to achieve these undulating roof lines. There are both positive and negative curves in this design.”

KPS not only created detailed shop drawings to reflect the patterning of the Alucobond on the roof but built a 30-foot model of the building featuring its “most radical” parts, according to Dalzell. “We were confident that we could approach this challenge properly to help create these roof edges,” he said.

“The roof edge had to be built from a durable material with a specific look to accentuate the roof lines that undulate in three dimensions,” according to Rebecca McDiarmid, GSC, LEED AP, project manager, Ledcor, who said the roof’s original design called for a sheet metal product to be installed shingle-style.
“From the first factory mock-up, it was clear that KPS was able to get the Alucobond to create a much smoother roof line with a lot less seams than what had been designed initially,” said McDiarmid. “There’s so much more flow to the edge of the roof. The Alucobond was also the most sustainable product we looked at for this application in terms of both its material components and the proximity of the manufacturing facility to our site.  … I’ve never seen anything like this; it’s a stunning profile.”

While a great deal of time and effort were involved in creating shop drawings and modeling the roof,  architectural changes still had to be addressed by KPS employees on site during Alucobond installation.

“The biggest challenge for KPS had to be dealing with changes as we went along,” said Grusko. “One of the last materials installed on this building was the Alucobond. A great deal of the finished profile of the roof was in KPS’ hands. In the end, they had to do a lot of re-measuring and site work. One of the great things about KPS is the company’s continued interest in innovation. They want to create unique products to showcase their work.” 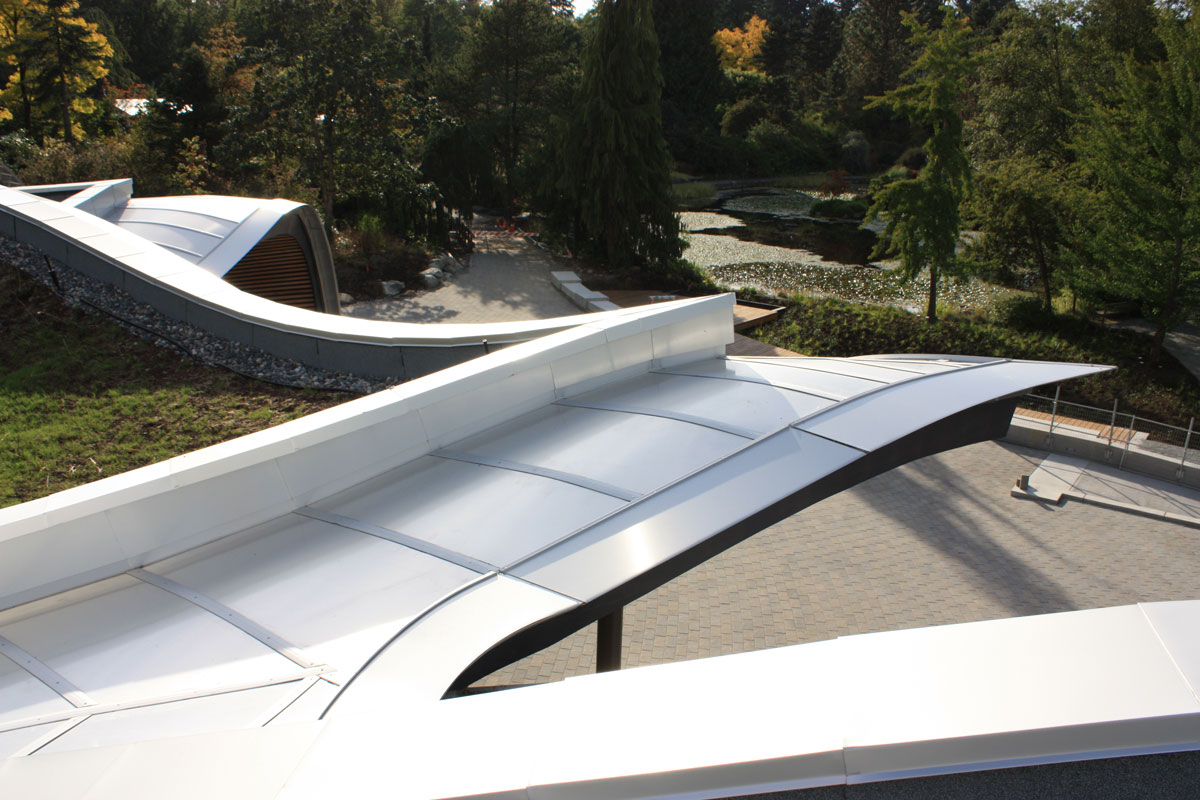 The extra efforts of KPS and of all subcontractors who worked with Ledcor on this project proved well worth it, according to McDiarmid.

“This project really pushed the envelope in terms of architectural design and construction,” said McDiarmid. “At one point or other in this project, each subcontractor told me that they’d never done anything like this before. It was an amazing project to be part of.”

“The response to this building has been quite overwhelming,” said Grusko. “We’ve been hearing a lot of great things. … The Alucobond helped us to push the boundaries of our design ambitions. We had a great experience with Alucobond. I’d certainly use it again.”

The VanDusen Botanical Garden Visitors Centre will be submitted to the Living Building Challenge after a year’s worth of operating data has been collected. The facility uses on-site renewable sources to achieve net-zero energy on an annual basis; sequesters enough carbon to achieve carbon neutrality; uses filtered rainwater for the building’s greywater requirements; and treats 100 percent of blackwater in an on-site bioreactor. 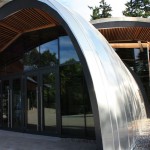 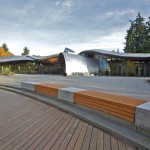 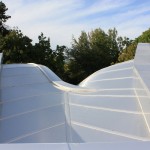 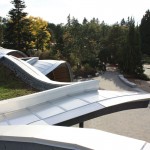 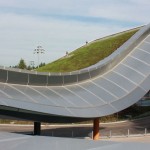 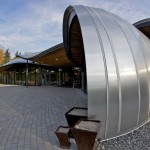 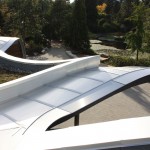 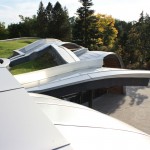 More information about sustainability initiatives at the Visitor Centre