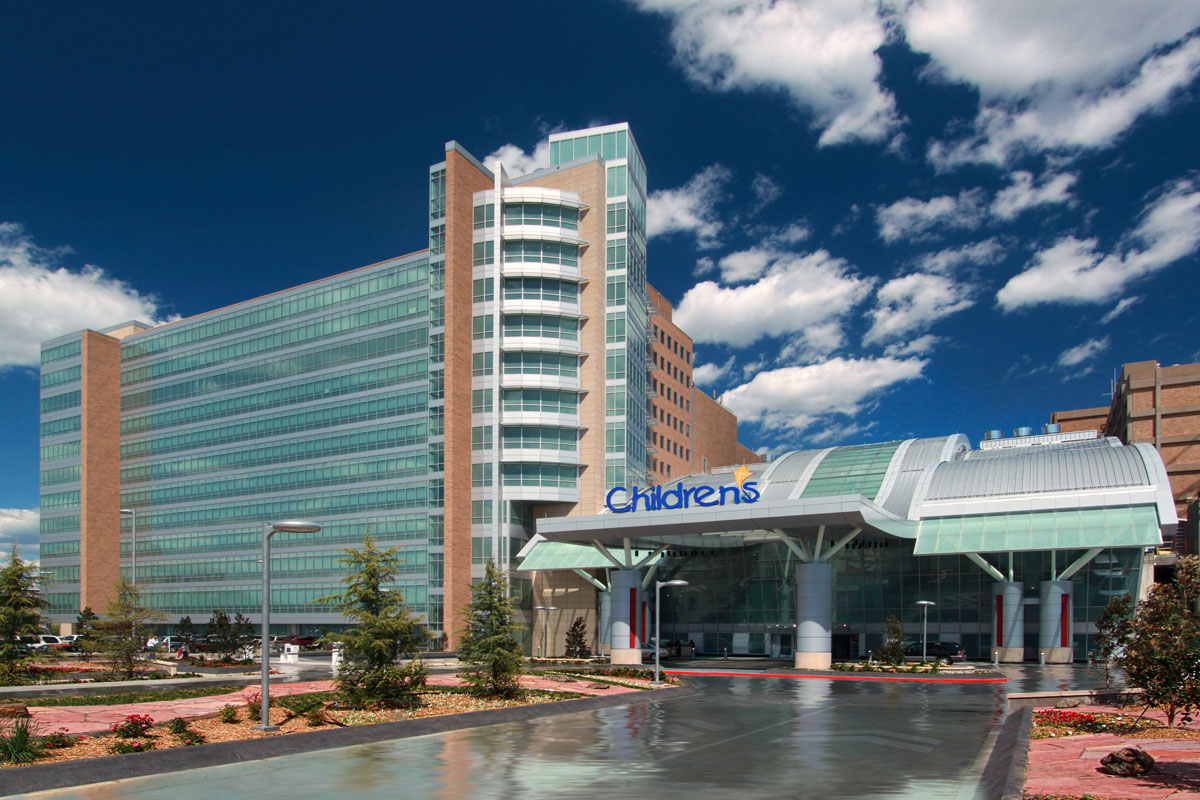 The whimsically designed six-story Children’s Atrium at Oklahoma University (OU) Medical Center in Oklahoma City never lets viewers forget who it is there to serve – the youngest of patients who might just as well prefer to be playing with toys outdoors.  A flying kite – which serves as the Children’s Hospital at OU Medical Center logo – inspired the atrium’s overall design; and, the building’s striking curved roofline reflects the fluid movement of kite ribbons.

The $29-million 65,000 square-foot Children’s Atrium – which officially opened in April 2011 as the new front door to the Children’s Hospital at OU Medical Center and the OU Children’s Physicians Medical Office Building – has been described as one of the most unique buildings in the state of Oklahoma.  Its undulating roofline profile – which has been compared to water slides or ski slopes – was constructed with a combination of glass skylights and standing seam metal roofing with Alucobond® Aluminum Composite Material (ACM) installed as cladding. 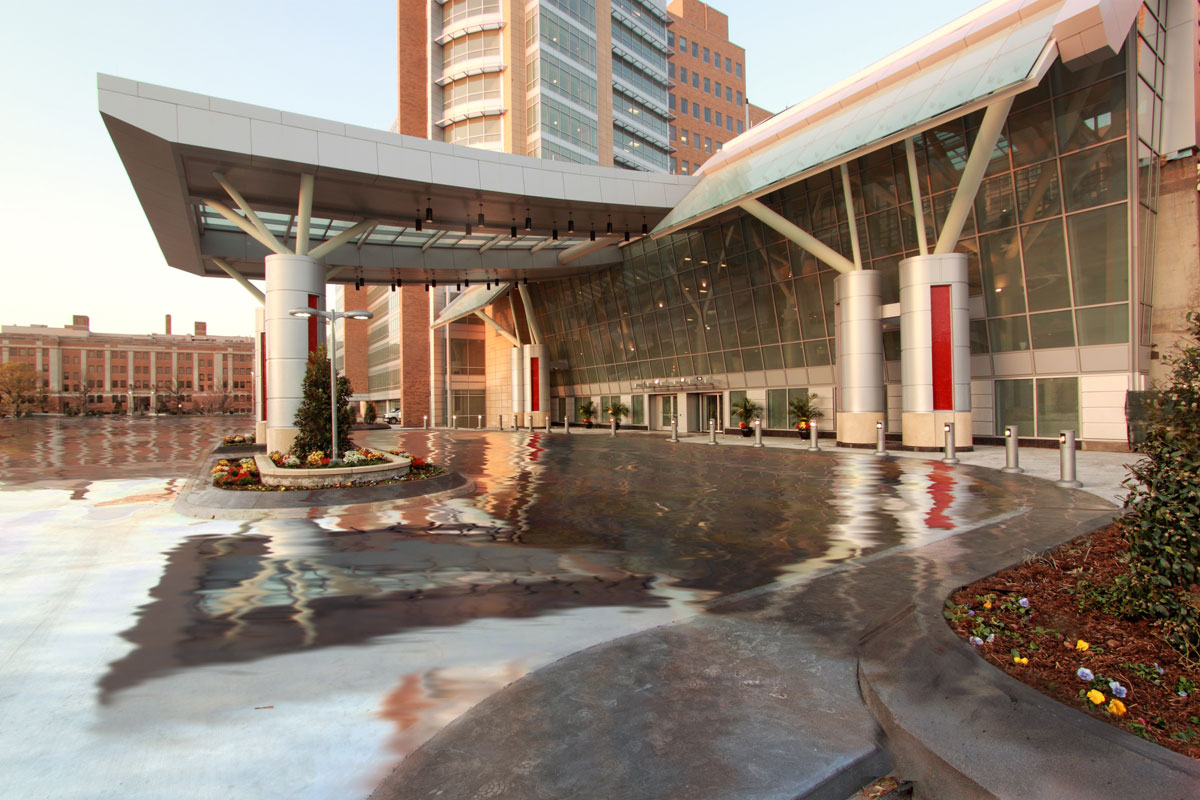 In addition to the roofline, the kite-ribbon concept provided a foundation for interior building elements, including furniture, floor patterns and way-finding components.  The child’s kite-ribbon design theme is complemented with two large, child-inspired commissioned pieces by internationally recognized artists.  Mackenzie Thorpe’s “Skipping Together” sculpture celebrates the joy of children; and, Shan Shan Sheng’s “Imagination Flying” – a set of 28 multi-colored polycarbonate butterflies – symbolizes transformation and hope.  Another artistic focal point is an interactive bubble wall, which vertically intersects three floors with continuously changing colors and bubble intensity that are motion-activated by visitors’ movements.

“The University Hospitals Authority & Trust (the building’s owner) wanted to make a statement with the entry,” said Jorge Charneco, AIA, senior vice president for Health, Science and Technology at Miles Associates, of Oklahoma City.  “They wanted it to be inviting and serve as a distraction for kids entering the hospital.  They wanted it to take their breath away.  There’s a lot of art installed in the atrium, which is a pretty big draw. … I’ve never worked on a project where people come in just to take pictures and leave.  It’s happened here.  You also know it’s special when contractors start taking pictures during construction.” 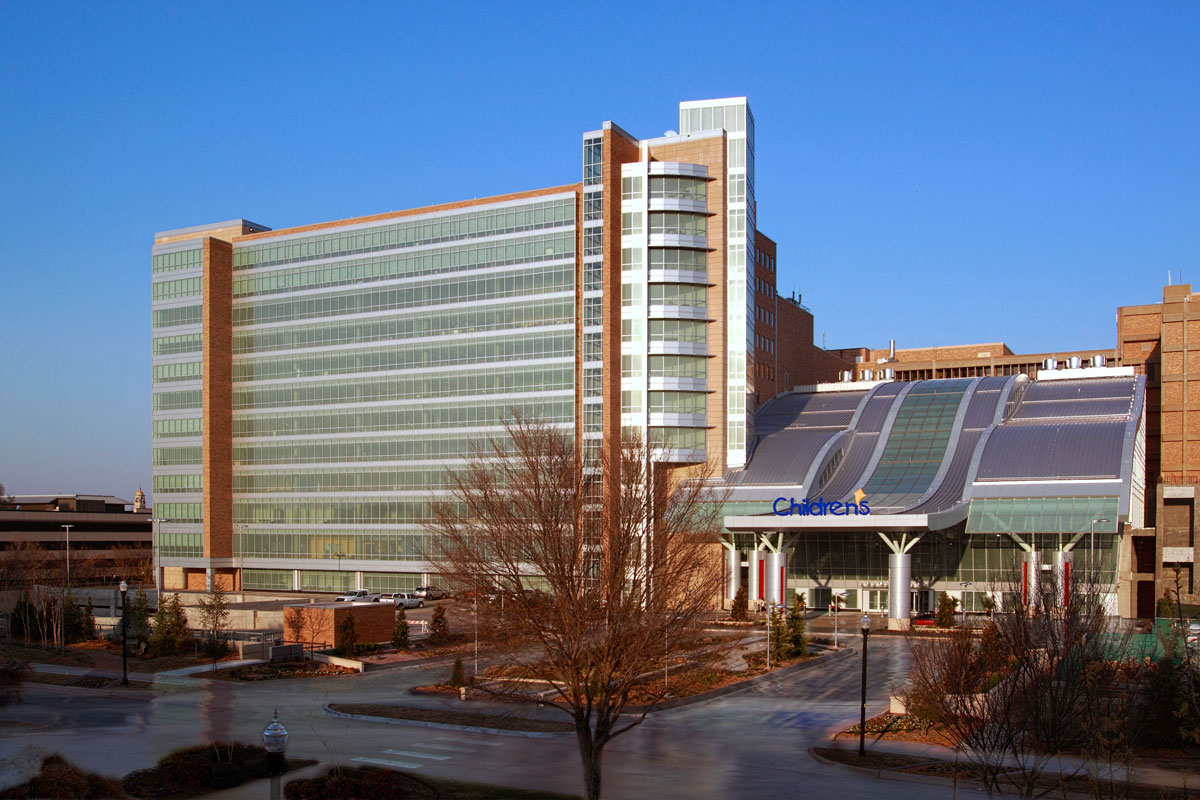 Miles Associates designed the Children’s Atrium in collaboration with the St. Louis office of HOK through schematic design of the building exterior; interior design was completed by Miles Associates.  Flintco, Inc., of Oklahoma City, served as general contractor for the project.
A total of 46,739 square feet of Alucobond ACM in the Silver Metallic color and 6mm thickness was fabricated for the atrium by Architectural Fabricators Co. (AFC), of Bartlesville, Okla.  The Alucobond panels also were installed by AFC primarily with the company’s new Structure-Lock RS™ system – which features a patented enhanced gutter system that helps to keep rain away from the building while processing it to clean panels naturally – and, secondarily, with its AFC-200 Dry System. 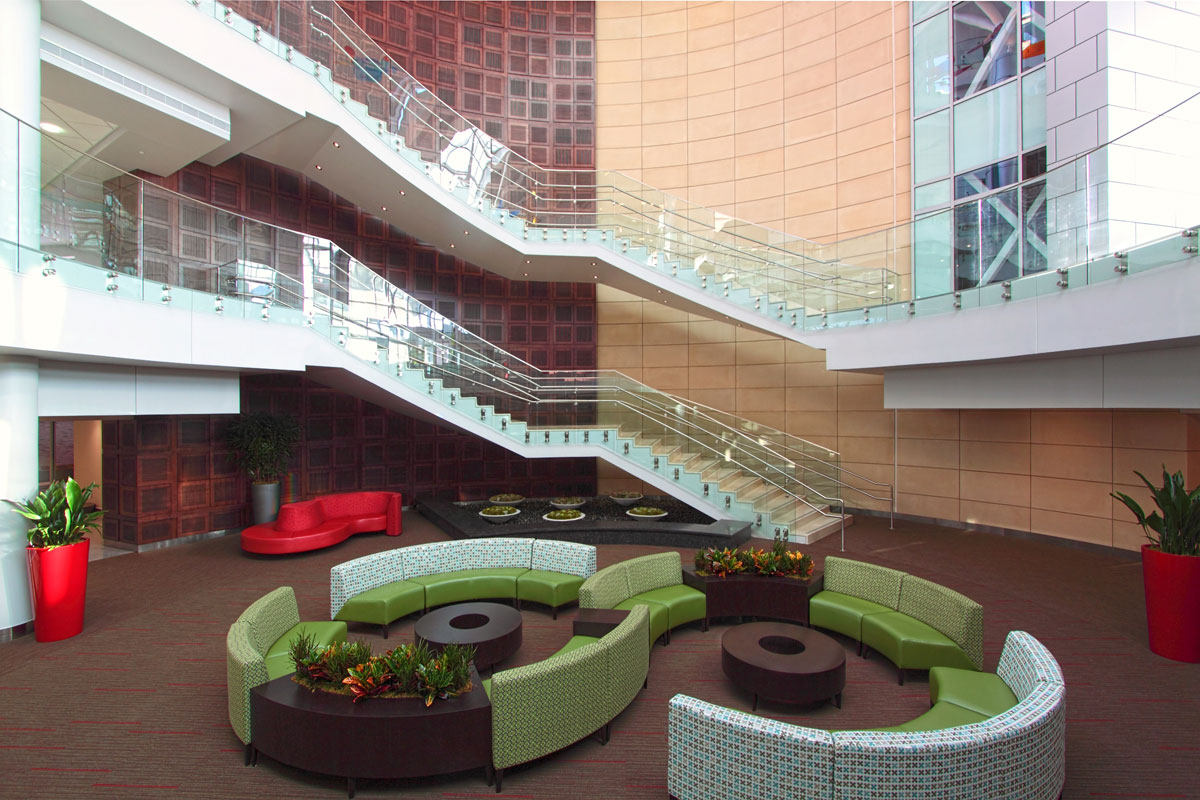 In addition to cladding the curved roof, Alucobond was installed throughout the building, including on the exterior columns, soffits, entryway canopy and glazed-in curtainwall as well as on interior wall columns and beam wraps and as revolving-door trim.  AFC also created custom coverings for everything from lights in the terrazzo floors to recessed lighting, mechanical boxes and return-air enclosures from Alucobond.

“Every configuration of Alucobond can be found on this job,” according to Mike Proctor, president, Architectural Fabricators Co, who said that more than 2,000 individual Alucobond panels were fabricated for this project. “Every panel was a custom shape; nothing was typical.  We had to measure and build each panel to fit.”

Added Shane Hand, project manager, Architectural Fabricators Co.: “This is the only job I’ve been on where I’ve maintained an office on-site. We were able to design on the fly, responding to changes every day.” 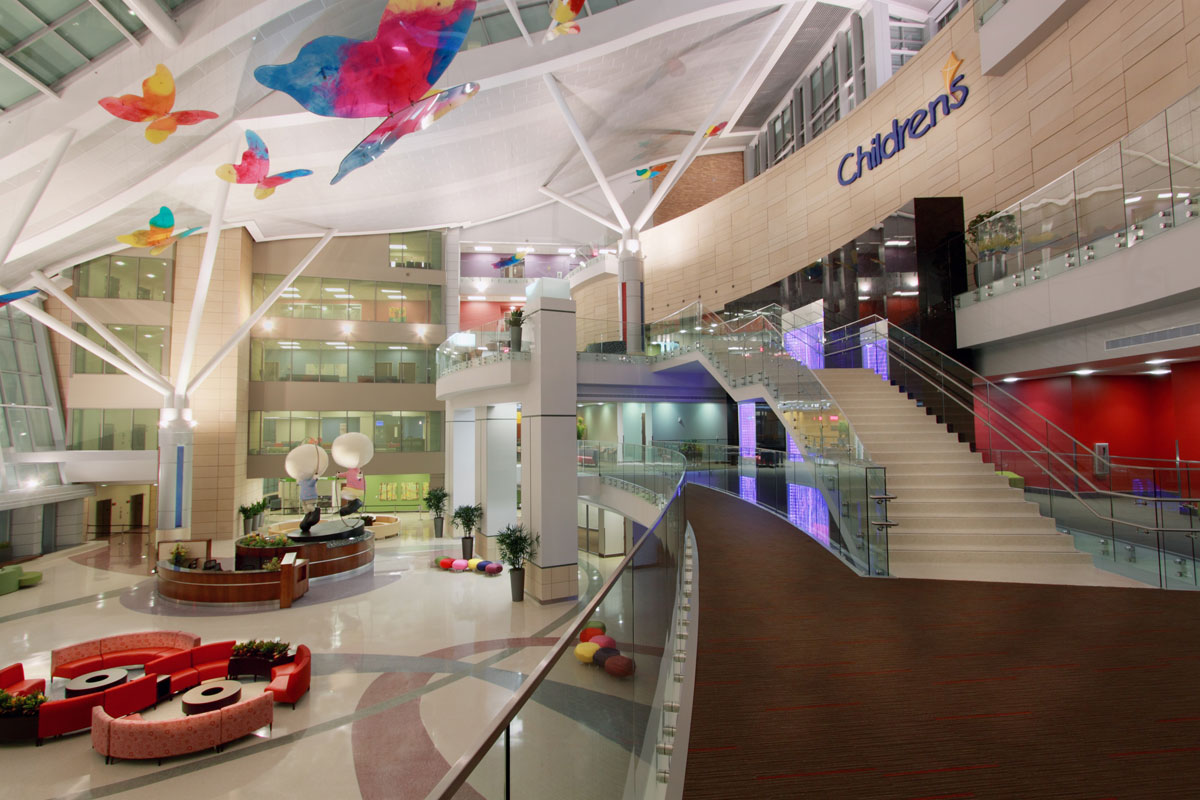 Miles Associates architects were so impressed with AFC’s responsiveness to design changes that they turned to the fabricator to develop trim for the three-story granite water feature when they ran into a glitch with the original consultant’s design.  Hand suggested constructing trim pieces from Alucobond naturAL with the brushed finish in order to maintain the original design’s stainless-steel look.

AFC fabricated and installed approximately 200 square feet of Alucobond naturAL in the 4mm thickness for the water-feature trim.
“When you walk up to the water-feature panels, people are surprised when I pull them open,” said Charneco.  “It was a great decision.  We got quality trim when we installed Shane’s custom-measured Alucobond panels.  It provided a crispness that wouldn’t have been achieved with the previous design.”

AFC recommended Alucobond for this project not only for its ability to easily be formed into unique architectural shapes but for its durability, according to Proctor, who praised Alucobond’s tensile strength and core.

“The Children’s Atrium has turned into quite a wonderful reception area with the butterfly sculptures overhead,” said Proctor.  “It’s a very clear and open space.  I don’t think another material other than Alucobond could have produced the sleek look that they wanted.”

“We had worked with Alucobond previously,” said Charneco.  “There’s a certain assurance going with the Alucobond brand name versus ‘Brand X’.  The product is great.  One of the strengths of this project was being able to collaborate on designs with Shane and his crew. … We started using Alucobond inside once its ease of use and quality of workmanship were apparent on the exterior.  It has a crispness that you don’t get with other materials.  Inside, the Alucobond design elements are reminiscent of the outside.  Adding the Alucobond panels inside allowed us to blur the line between inside and outside.” 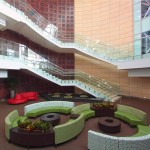 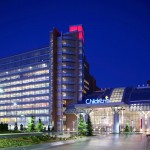 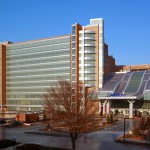 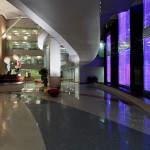 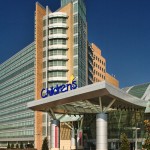 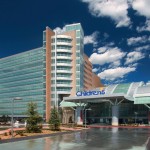 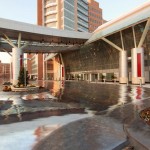 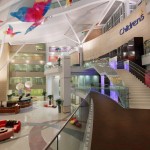 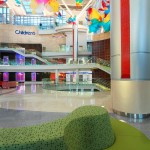