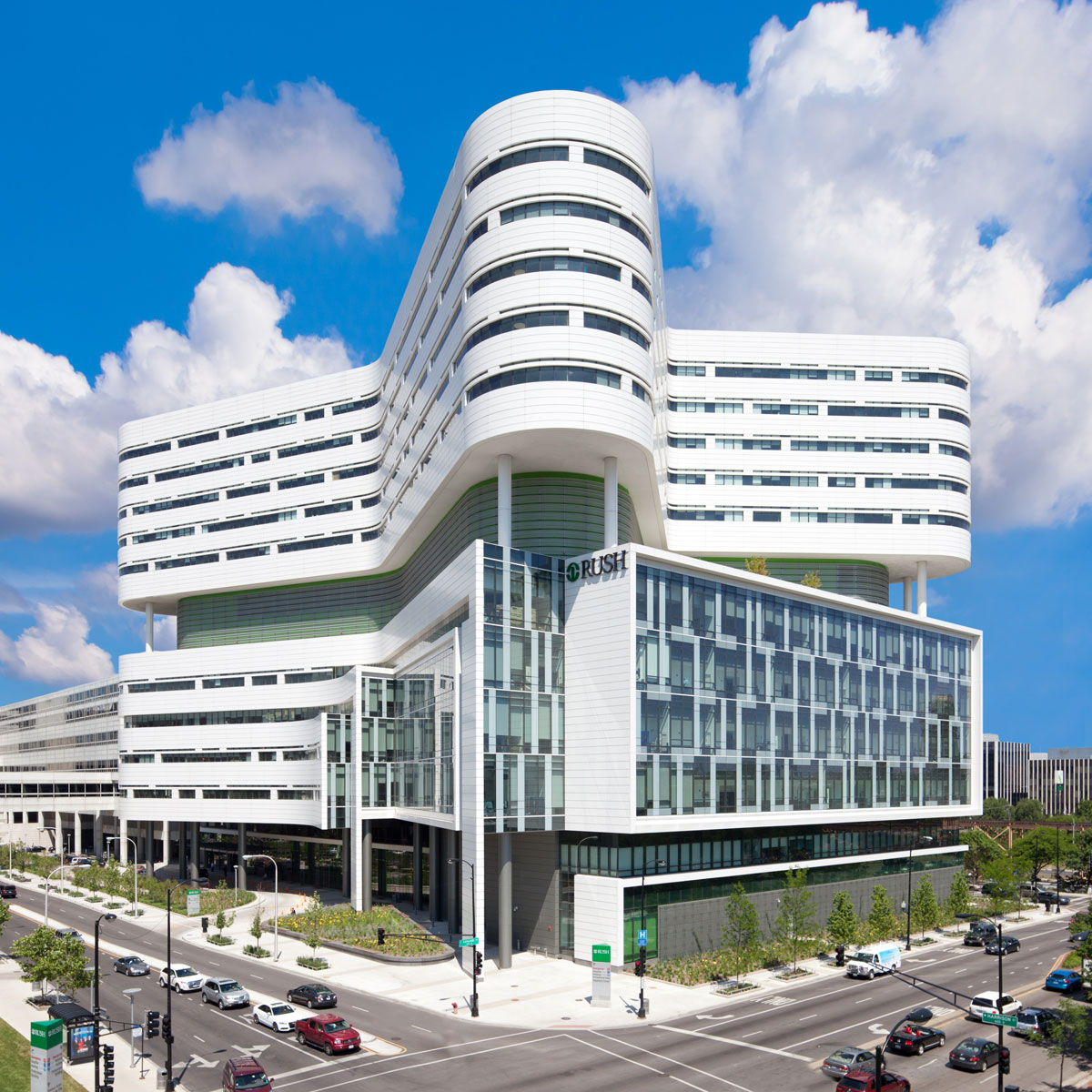 The new 14-story $654-million hospital building at Rush University Medical Center in Chicago, which is referred to as The Tower, stands out on the city’s skyline with a unique butterfly design and striking white exterior – both visual symbols of the medical center’s goal to transform healthcare delivery. Formable Alucobond® Plus aluminum composite material in the custom Spinnaker Bone White color was selected to realize the hospital’s shining, clean exterior image and its unique butterfly design.

“While our foremost goal was for the new hospital’s design to support its function and enhance patient care, we also knew it would be very important to establish a strong visual presence in Chicago’s skyline and along the expressway leading to and from the city,” said Mike LaMont, associate vice president, Capital Projects, Rush University Medical Center. “White is a symbol of cleanliness, technology and modernity.  It’s the color of doctors’ lab coats and, in the past, nurses’ uniforms. The hospital’s exterior helps convey these associations, giving all who see it the impression of Rush University Medical Center as a place where they can receive the very best healthcare.” 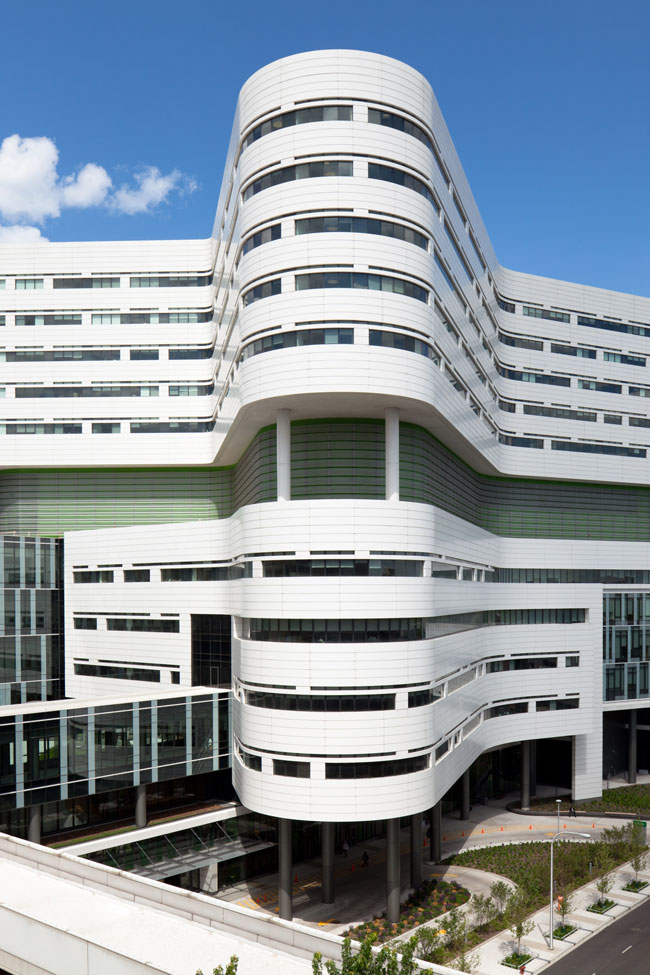 The Tower – which opened in January 2012 – is the major component of Rush’s 10-year $1-billion campus redevelopment project called the Rush Transformation, which includes new construction, renovations of existing buildings and investments in leading technology across the 30.5-acre campus, according to Rush.

“Chicago is home to a very competitive healthcare market,” said John Moorhead, LEED AP BD+C, senior project designer, Perkins+Will Chicago.  “Rush wanted to stand out from the competition.”
The 840,000 square-foot LEED-Gold Tower stands out in the market not only by offering state-of-the-art healthcare technology but by the medical center’s overriding goal to re-orient its facilities around patients and their families.  To achieve this goal, leaders at Rush University Medical Center enlisted the aid of doctors, nurses, staff and patients – some of whom worked as members of the Office of Transformation – to help architects design the new hospital.

“We described this experience as ‘designing from the inside out,’” said Moorhead.  “The Tower is not a shape that we created and then jammed rooms into.  It was designed first and foremost to enhance the patient experience.” 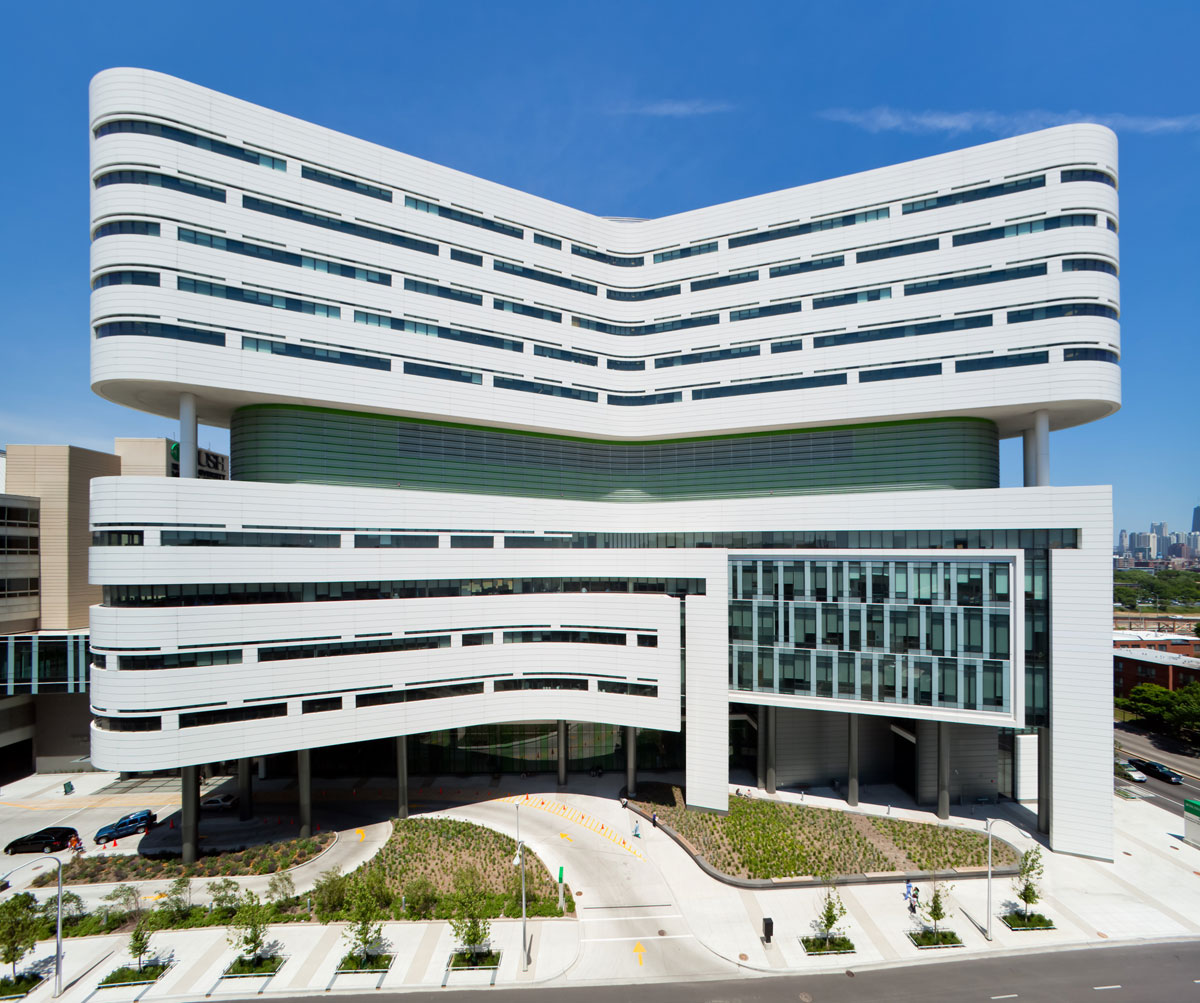 A corner lot that was home to campus tennis courts was chosen as the site of the new Tower, which also serves as “a gateway to the campus,” according to Moorhead.

The butterfly design is featured on the hospital’s top five floors – which house 304 individual adult and critical care beds – and was suggested following Rush transformation team input.  Patient care is delivered in four building quads with hospital rooms arranged in a triangular shape to “increase the close proximity to patients for nurses,” according to Moorhead.

The Tower’s ground floor houses an advanced emergency response center, which is prepared to treat large-scale health emergencies.  The Tower also includes three consecutive floors devoted to an interventional platform in which diagnostic testing services, surgical services, interventional services and recovery areas are located within a short distance of each other.

A full-scale patient hospital-room floor plan was painted onto the tennis courts before construction began to allow doctors and nurses to test out the design that features decentralized nursing stations with no counter barriers between patients and families, “They were completely focused on the experience of patients and their families as well on the safety of patients and staff members,” according to Moorhead, who said this real-life test of the patient-care space cemented the curved butterfly floor-plate design with Rush leaders.

Chicago-based Powers/Jacobs Joint Venture, which served as construction manager for the Tower, turned to ASI Ltd., previously of Whitestown, Ind., for exterior walls.

Sobotec Ltd., of Hamilton, Ontario, served in a design-assist role with ASI as fabricator of the Alucobond panels, which were installed with glass in a unique unitized curtain wall system. 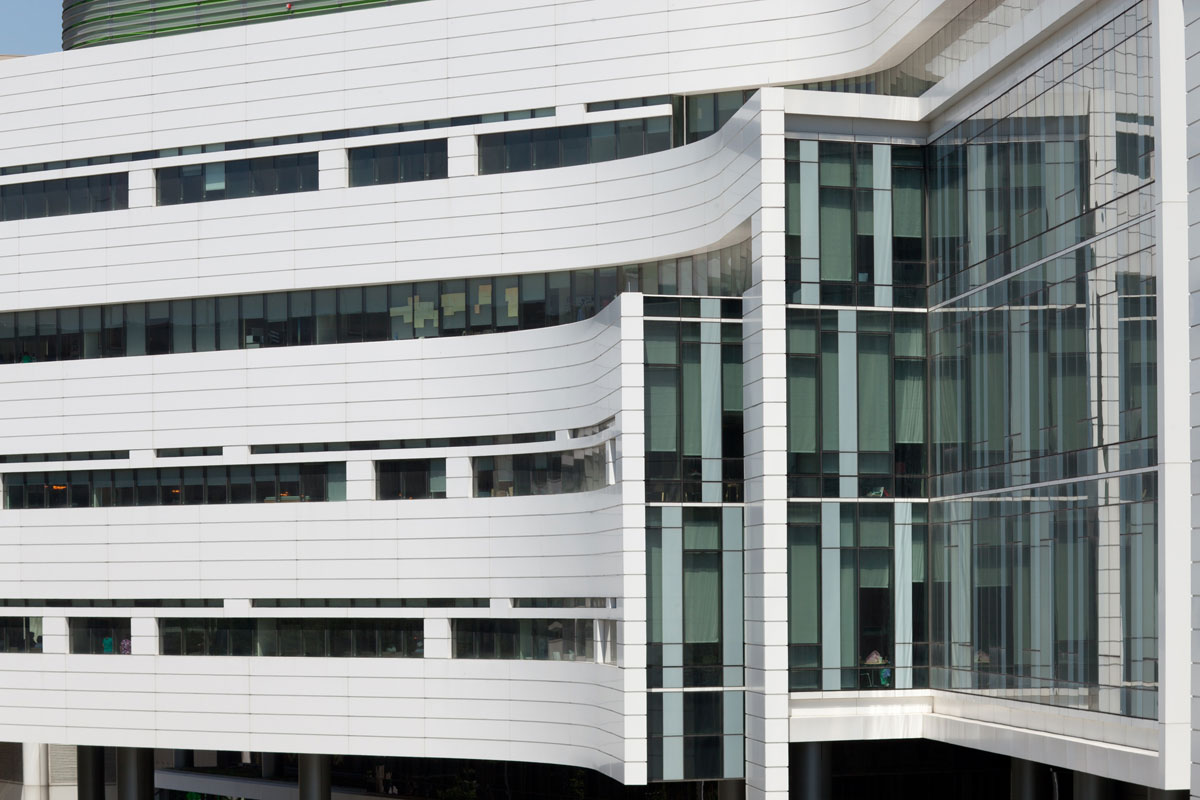 “We studied colors and picked ones that we thought would draw the most attention to the building with the cleanest, sharpest look,” said Moorhead.  “There are not a lot of white metal buildings in Chicago, and this building is enormous.”

The unique unitized curtain wall system was utilized to enclose the Tower as quickly as possible.  Sobotec created AutoCAD computer-generated drawings to fabricate Alucobond panels that were sent to ASI for inclusion in a prefabricated curtain wall featuring a framed support system for the metal panels and glass. 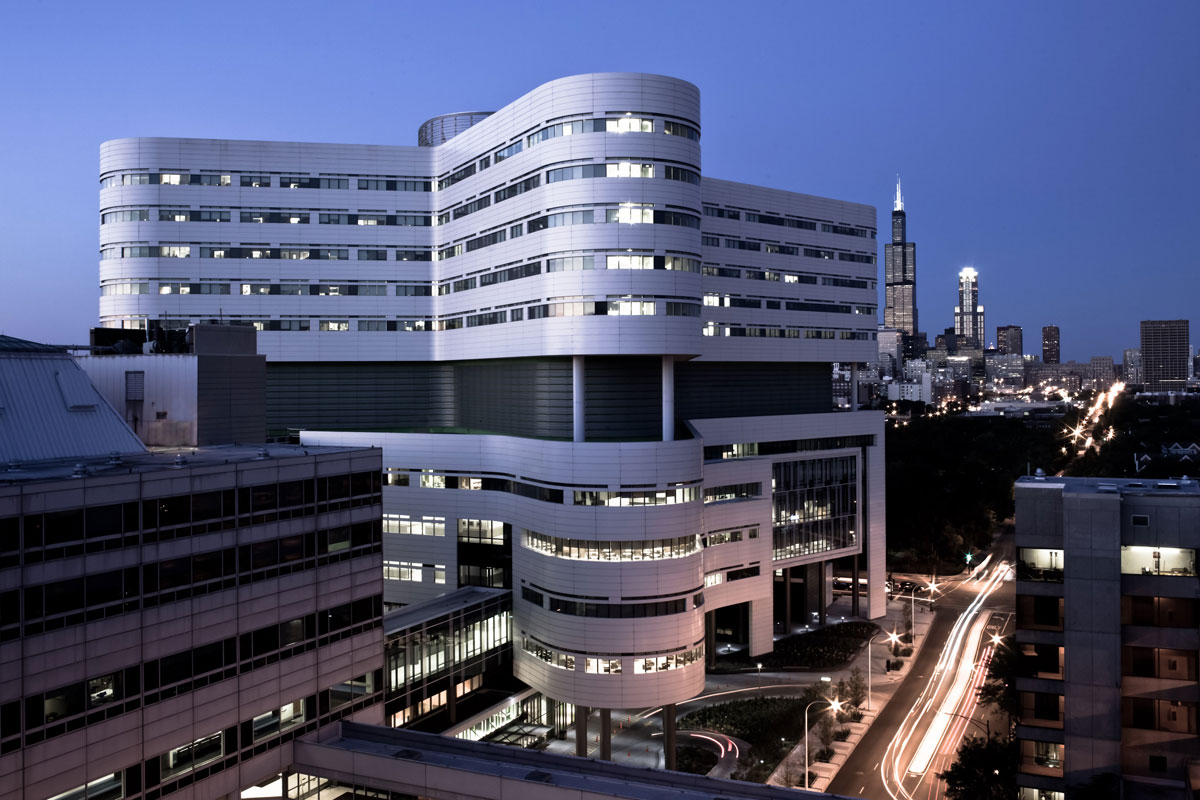 “This was not a conventional panel system featuring metal studs and sheathing,” said Vlad Sobot, president, Sobotec. “We had to be very precise in fabricating the Alucobond panels.  There were numerous bullnose shapes, curves and very long panels.”

The original Perkins+Will design concept utilized glass to create the butterfly design, according to Moorhead, who said that glass was rejected because it did not fit the grid concept and that metal panels proved to be more cost-effective.

“The metal panels at the corners of the butterfly tower are all curved,” said Moorhead. “The curvilinear panels worked really well.  Glass is segmented around the curve, but the more predominant building material is the metal panel.”

The Tower at Rush University Medical Center marked the first time that Moorhead had incorporated Alucobond aluminum composite material in a building design.

“I’d be happy to use it again,” said Moorhead.  “Other products that were presented to us had more constraints. The Alucobond panels gave us a lot of freedom in the way they were able to be shaped and adapted to the building design.”