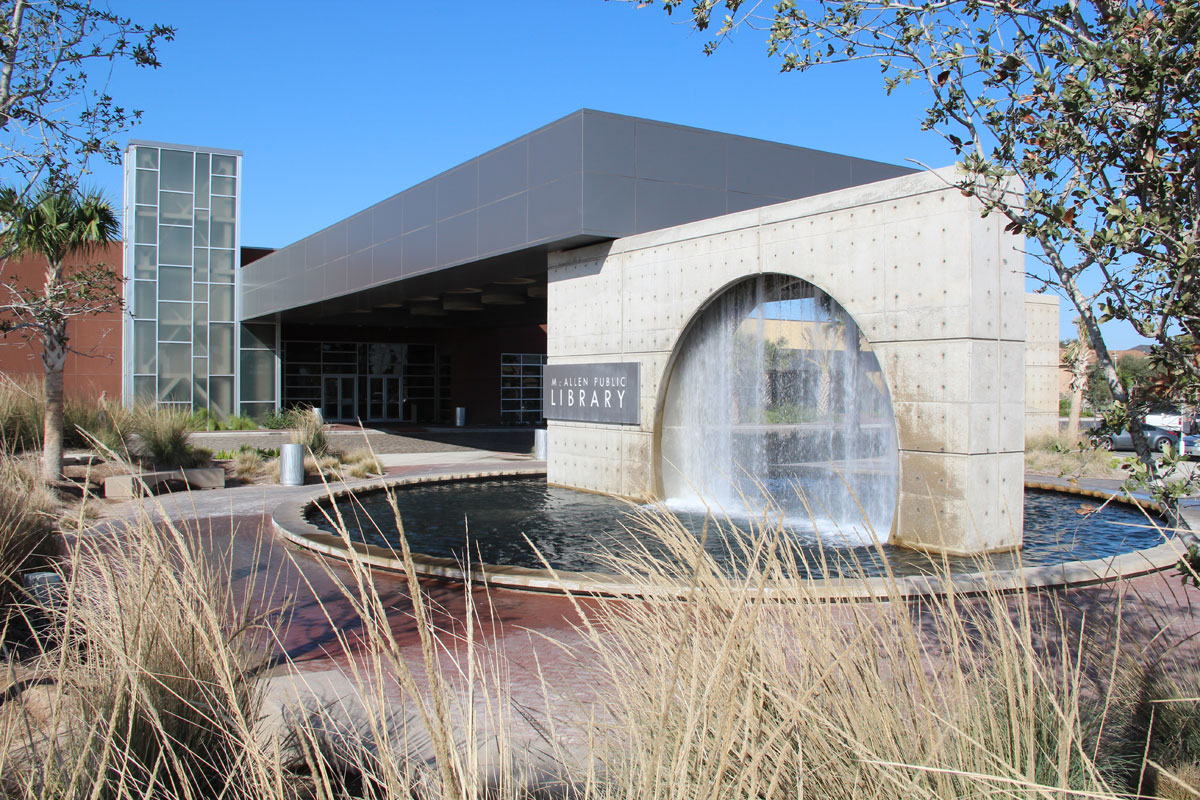 The new McAllen, Texas, Public Library – which opened on the site of a vacant Walmart in December 2011 – was envisioned by city officials from the start of architectural bidding to include environmentally friendly features. But, from the perspective of Boultinghouse Simpson Gates Architects in McAllen, no design could be more environmentally conscious than adaptively reusing the former “big box” retail store, saving approximately 130,000 square feet of building demolition debris from being sent to the local landfill.

The McAllen City Commission agreed, awarding the project to Boultinghouse Simpson Gates, which served as architect of record. 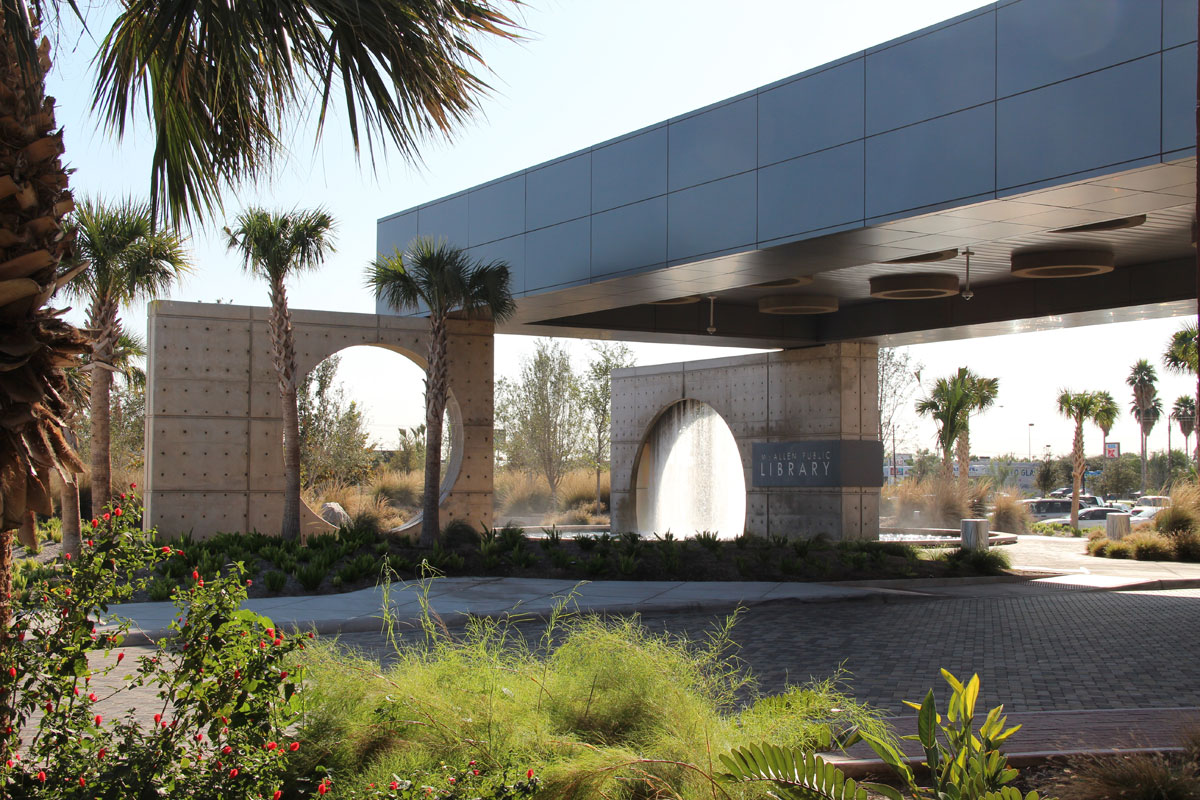 The adaptive reuse design of the McAllen Public Library almost could seem to embody Walmart’s marketing slogan: “Save money. Live better.” But, as directed by the city commission, the look of the new library was in no way to resemble the building’s previous retail tenant, according to John Gates, AIA, principal, Boultinghouse Simpson Gates Architects.

By adaptively reusing the building, the new $25.7 million McAllen Public Library occupies 123,000 square feet on one floor, making it the largest one-story library in the country. But the former “big box” building’s appearance drastically has been altered with dramatic exterior features, including a 108-foot by 44-foot main-entry canopy, which is clad in Alucobond aluminum composite material. 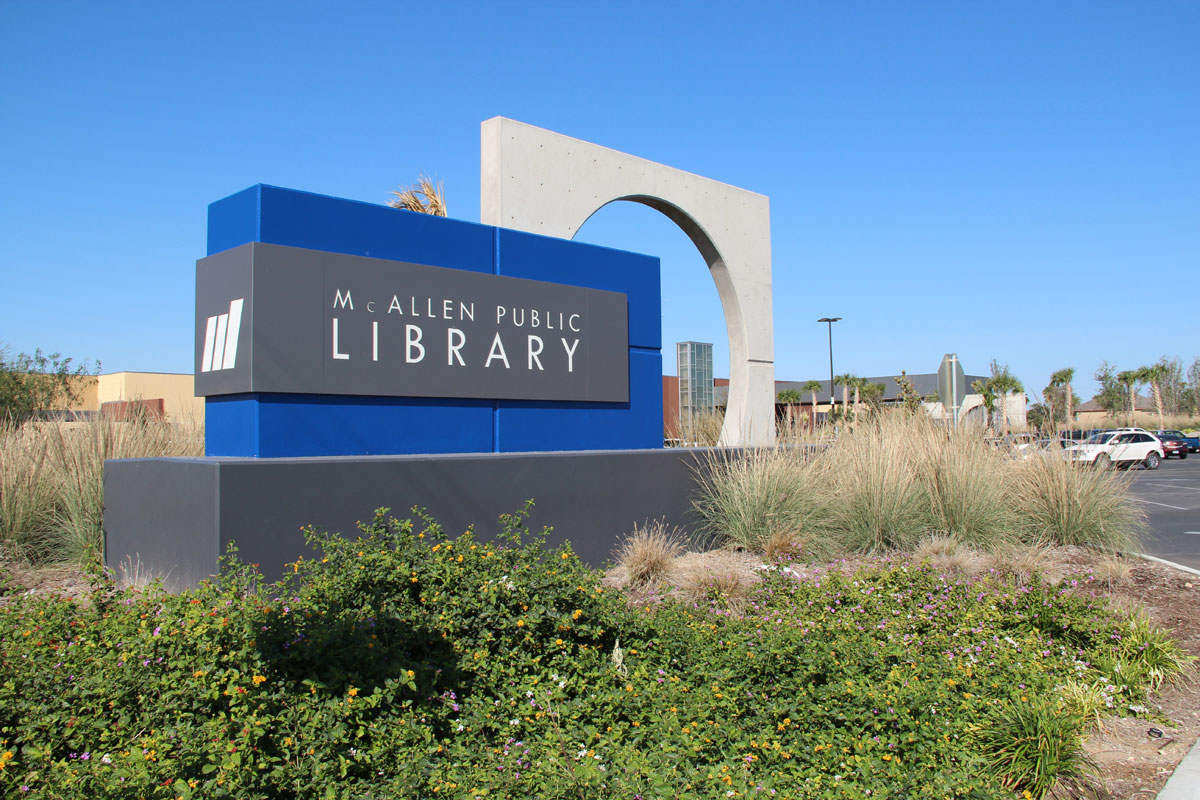 The main-entry canopy is supported by two concrete walls – one of which is submerged in a pool and includes a circular opening. Water cascades through the opening into the pool. This water-wall was designed to pump more than 2,000 gallons per minute to mask traffic noise from a nearby busy intersection and to cool the area surrounding the canopy on hot days. Alucobond ACM is installed as library signage that wraps around three sides of the water-wall. Signage text was water-jet cut into the Alucobond.

The main-entry canopy plays an important role in shielding library patrons from the elements in McAllen, according to Gates. (McAllen is located in the Rio Grande Valley in the southern tip of Texas.)

“It can get brutally hot in the summer here,” said Gates.  “So it was important to provide shade as far out into the parking lot as possible.”
Alucobond was selected for its durability, according to Gates, who became familiar with the original aluminum composite material in a previous project for a car dealership.

“We wanted a metal panel for the library that was durable and resistant to oil canning,” said Gates. “The panel also had to hold up to any flying debris that could dent it.” 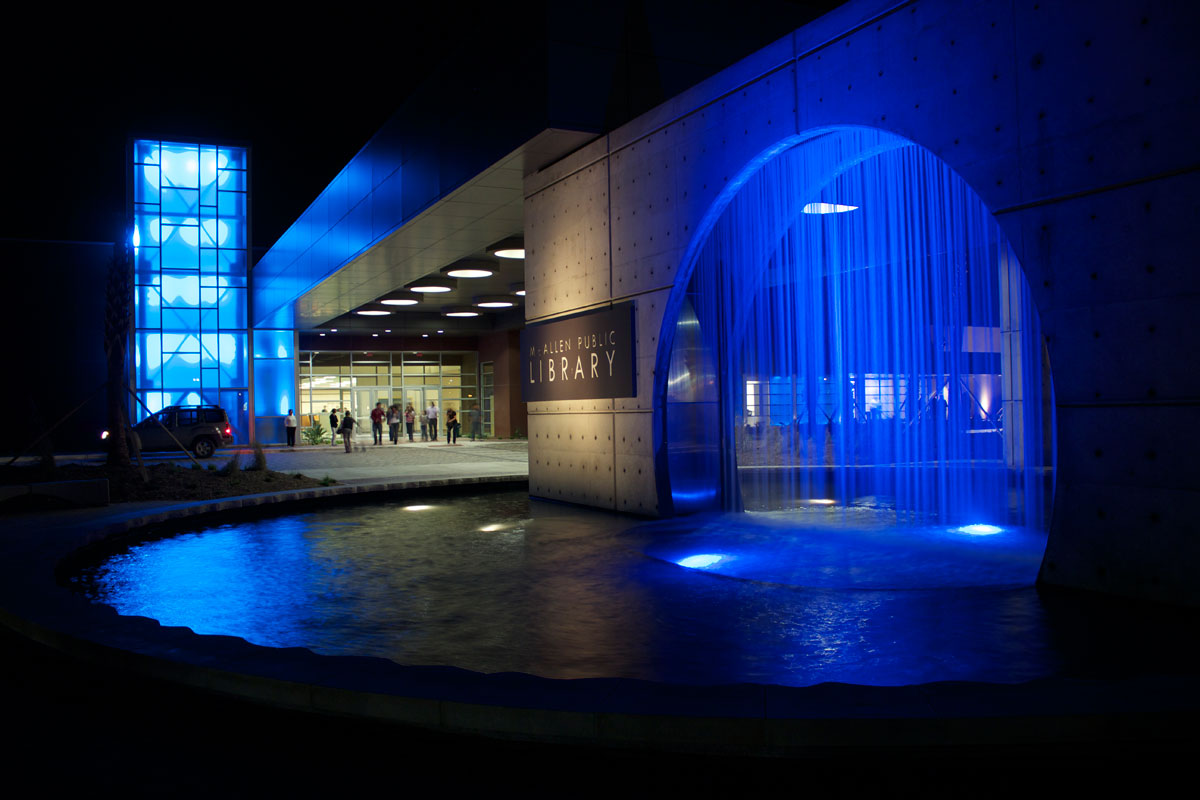 The Alucobond dramatically demonstrated its ability to meet that last requirement during a spring storm that hit McAllen on March 29, 2012. “The Alucobond sustained a very high wind storm with some golf ball to baseball sized hail,” said Gates. “A large part of the community suffered significant damage, but the Alucobond showed no damage.”

“That storm inflicted an incredible amount of damage in McAllen,” said Kate P. Horan, library director, McAllen Public Library. “We went through every Alucobond panel, and it’s all intact.  The weather can be rough here on a regular basis with wind gusts up to 30 miles per hour. The fountain also is constantly blowing water under the canopy. The Alucobond still looks beautiful.”

The Alucobond panels were fabricated by Bowman Distributing Co., of San Benito, Texas, which installed them with a rout and return wet-seal system. Barcom Construction, Inc., of Corpus Christi, Texas, served as general contractor for the project.

“The appearance of the Alucobond is very smooth compared to other metal cladding,” said Juan Marchan, general partner, Bowman Distributing Co. “With other metal panels, you can see waviness.”

Formable Alucobond also performed well in the secondary 60-foot by 30-foot canopy, which includes a circular opening to allow a palm tree to grow through it, according to Eduardo Richa, general partner, Bowman Distributing Co. “The Alucobond shapes well,” said Richa.

The secondary canopy is located on the library’s northeast corner, which is dark much of the time, according to Gates. “We wanted to illuminate the space,” said Gates.  “Putting the tree through the opening adds interest.” Gates said the Alucobond Steel City Mica color worked well in the building’s new color scheme, which Boultinghouse Simpson Gates created in consultation with Meyer, Scherer & Rockcastle, Ltd., of Minneapolis. The latter firm designed the library’s interior as a consultant to Boultinghouse Simpson Gates.

“The overall theme of growth was applied to the colors and shapes in the new library,” said Gates. “The colors are based on local nature, including the colorful birds that pass through the Rio Grande Valley each spring when they migrate from South America to Canada.” 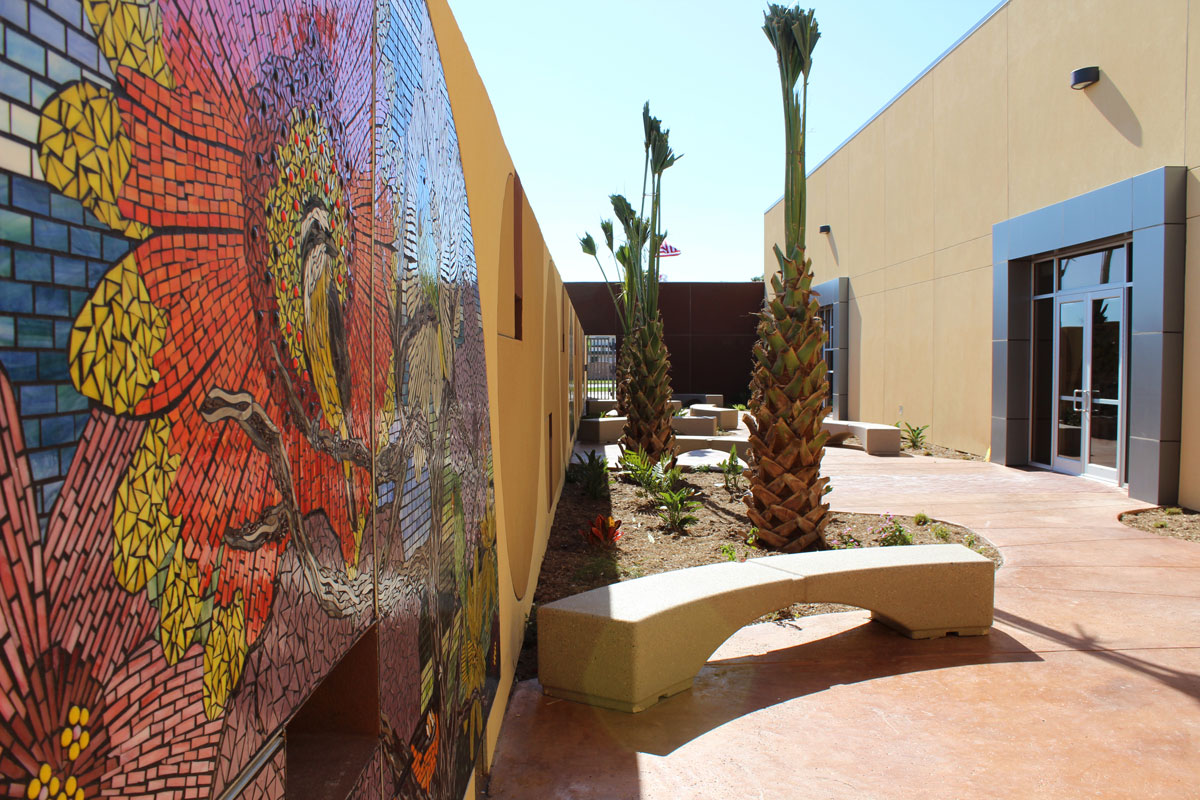 The Alucobond in the Steel City Mica color also is juxtaposed against the Hyper Blue epoxy paint denoting the City of McAllen in the library’s exterior concrete monument signage.

“The Alucobond is a fairly dark metal panel; but, it changes colors depending on the time of day,” said Gates.

“The Alucobond panels are a unifying feature throughout the building,” said Horan. “There’s added interest in these perfectly formed panels that shine and reflect the light. People are always remarking about the building’s beauty.  It’s very contemporary with a flowing design that literally includes the fountain.  The ideas of motion and movement are prominent. The Alucobond contributes to this sense of motion.”

The new library has been well-received by the McAllen community, according to Horan, who said the walk-in gate count on Saturday and Sunday is averaging 4,000 visitors – the same number of visitors that the library’s former location would have seen in a month.

“When people come in for the first time, you can see the ‘wow’ on their faces,” said Horan.  “Those new faces are now regulars. … The McAllen City Commission is very pleased with the use that we’re getting from this building.”

“If you’re new to the area, you’d never know that it was a Walmart,” according to Gates, who said visitors can contrast the adapted building with a new Walmart store built on property located just across the canal that runs right behind the library. 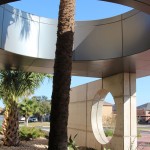 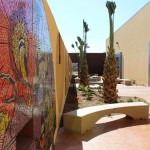 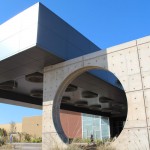 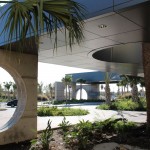 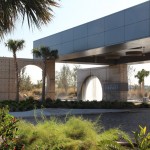 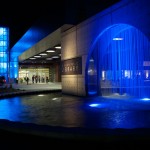 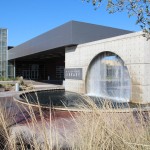 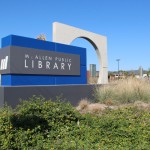