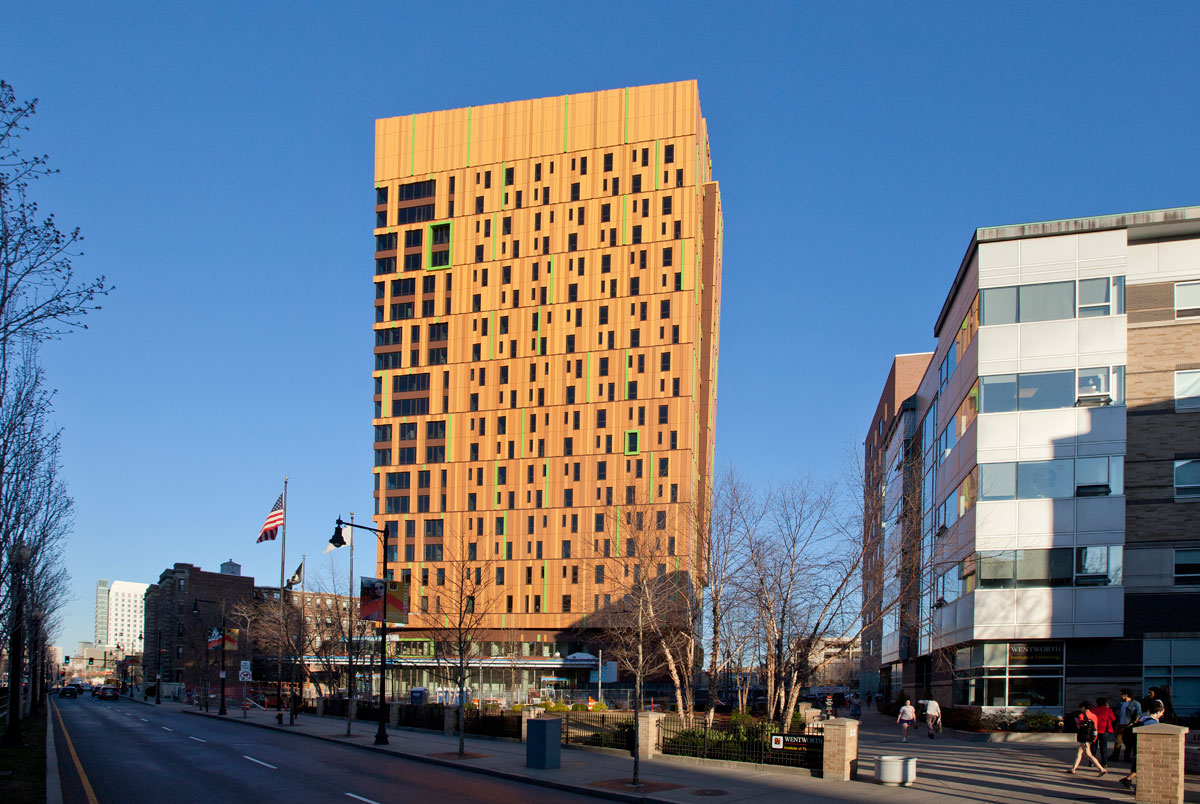 The practical goal of the new $61-million 21-story Student Residence Hall at Massachusetts College of Art and Design (MassArt) in Boston may have been to provide 145,600 square feet of on-campus accommodations for 493 students when it opens in the fall of 2012.  But the unique design of the new Residence Hall – which is clad in 5,500 Alucobond® Plus aluminum composite panels in seven custom colors that are dimensionally positioned with glass to invoke Gustav Klimt’s 1909 “Tree of Life” painting – has met an aesthetic goal to set the building apart on the Boston skyline and, thereby, create an idiosyncratic image for MassArt.

“From the college’s point of view, the building needed to express the individuality of MassArt,” said Cameron Roberts, AIA, IIDA, LEED AP, principal, Cameron Roberts Advisors of Boston, who serves as a professional advisor to MassArt. “College officials were not initially convinced of the need for a hi-rise; but, once it was clear that a hi-rise was the best solution, the college did not want an anonymous residential tower. … That’s how the colored Alucobond panels came about. The college was a sophisticated client when it came to color, art and expression.”

An 80-person design charrette – consisting of MassArt administrators, students, faculty members, trustees and alumni as well as representatives of building owner Massachusetts State College Building Authority – met with architects from Boston-based ADD, Inc., to collaborate on the design of the building, which features 136 suites configured with single, double and triple bedrooms. Public areas include workrooms, a café, a student health center and a “pajama floor” outfitted with a game room, TV lounge, group study area, laundry, fitness room, vending area and a community kitchen. The new Residence Hall will allow the college to increase housing of its student population from 26 percent to 44 percent. 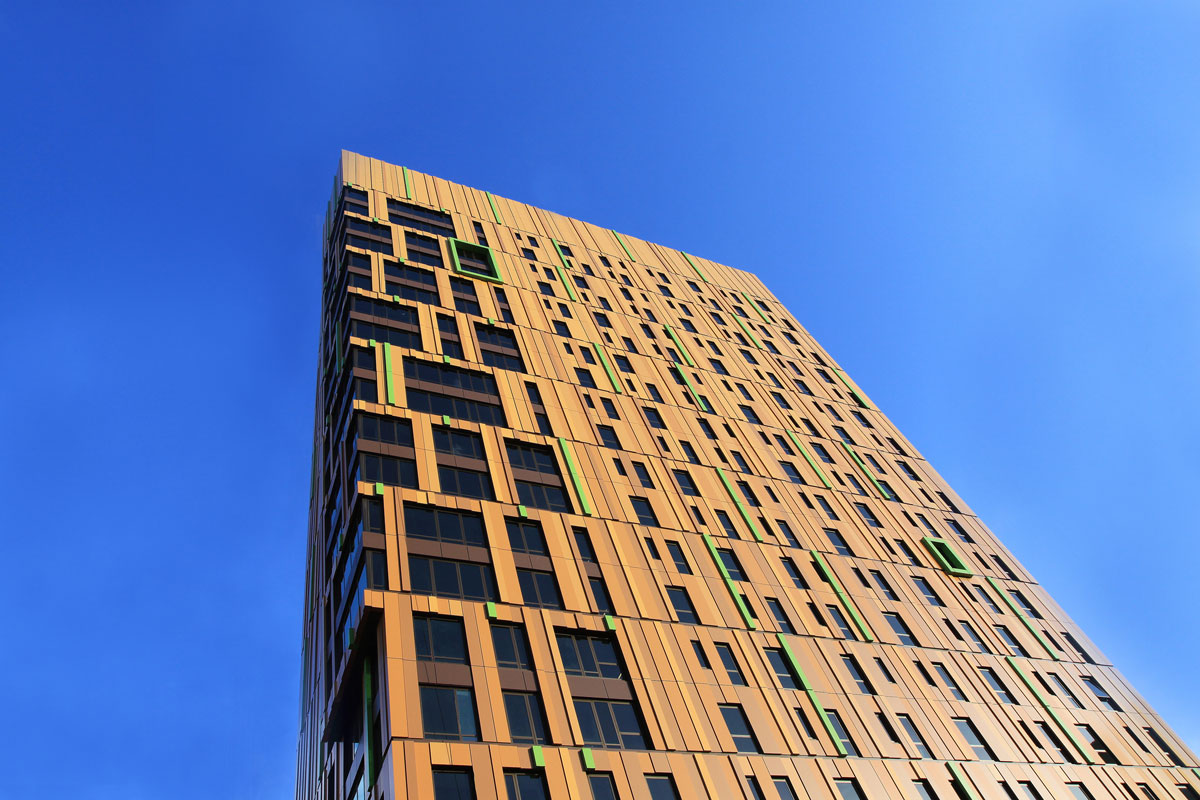 “MassArt suffered from being hidden along the ‘Avenue of the Arts’ (Boston’s Huntington Avenue),” said B.K. Boley, AIA, LEED AP, design principal and director of sustainable design at ADD, Inc. “The college’s tallest building was a foreboding black glass tower across the street.  College administrators wanted MassArt to be recognized with a signature building. Students suggested that the building be viewed as a painting in the skyline – both expressive and exuberant.  They wanted to be identified as an art school.”

Boley’s team suggested Klimt’s “Tree of Life” painting as a point of departure and inspiration for the building that would embody the rebirth of MassArt. “The ‘tree of life’ is represented in almost every culture and art form in the world; it conveys a meaning of change and optimism,” said Boley.

“The students also wanted sustainability represented in the building’s design, but they didn’t want gadgets,” according to Boley, who said the MassArt Residence Hall was designed to meet LEED Silver certification standards. “There’s nothing more organic than a tree. With this building, we’ve planted a flowering tree along the ‘Avenue of the Arts.’”

Boley describes the work of famed Viennese artist Klimt – whose 150th birthday would be celebrated July 14, 2012 – as “somewhat pointillist” with the artist “always contrasting one color next to the other, providing richness at different scales of perception,” he said.

“We selected metal panels because we couldn’t get the range of colors from other systems,” said Boley.  “The Alucobond gave us the variety we needed.  You can’t design your own brick or terra cotta. With these metal panels, it’s whatever you can dream up.” 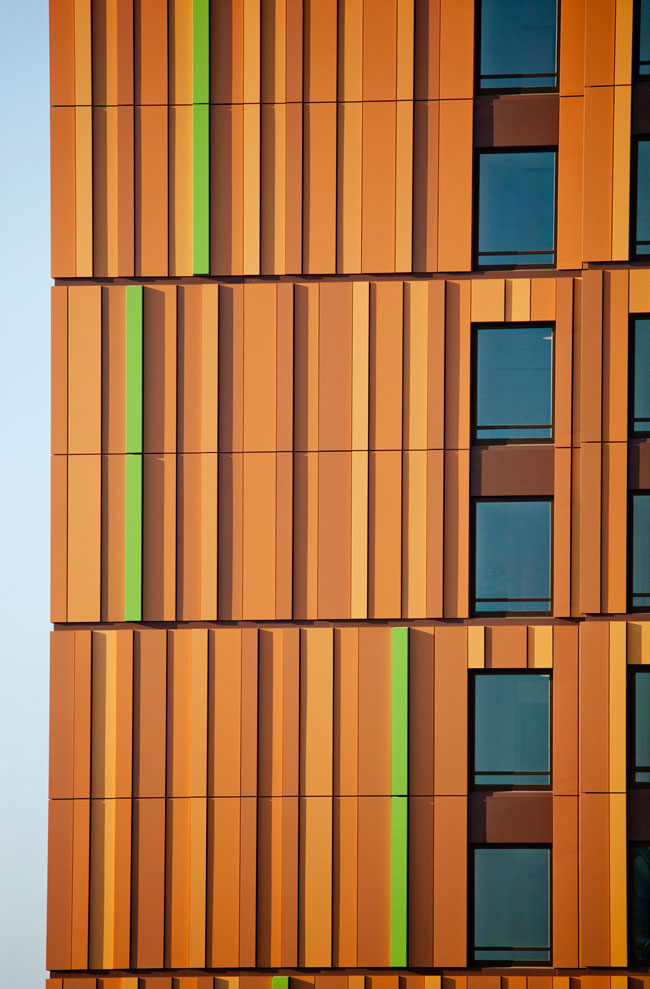 To recreate the “Tree of Life” image, a total of 174,768 square feet of Alucobond® Plus material in the 4mm thickness was ordered in seven custom colors, which also were differentiated with five gloss levels ranging from 10 to 50.  In addition to offering a wide range of stocked colors, Alucobond is known for its extensive custom color-matching program.  Working with PPG Industries, 3A Composites’ custom color specialists provided 54 color matches to create these panels for MassArt.

“We started with dark colors at the bottom that lighten at the top, making the building seem to disappear into the mist,” said Tamara Roy, AIA, LEED AP, senior associate principal, ADD, Inc., who served as design leader on the MassArt Residence Hall project.

The Alucobond panels “change color from the trunk of the tree into the canopy,” added Boley, who said the panels were oriented vertically and set in a total of five different depths from the building to simulate a tree’s bark-like surface. 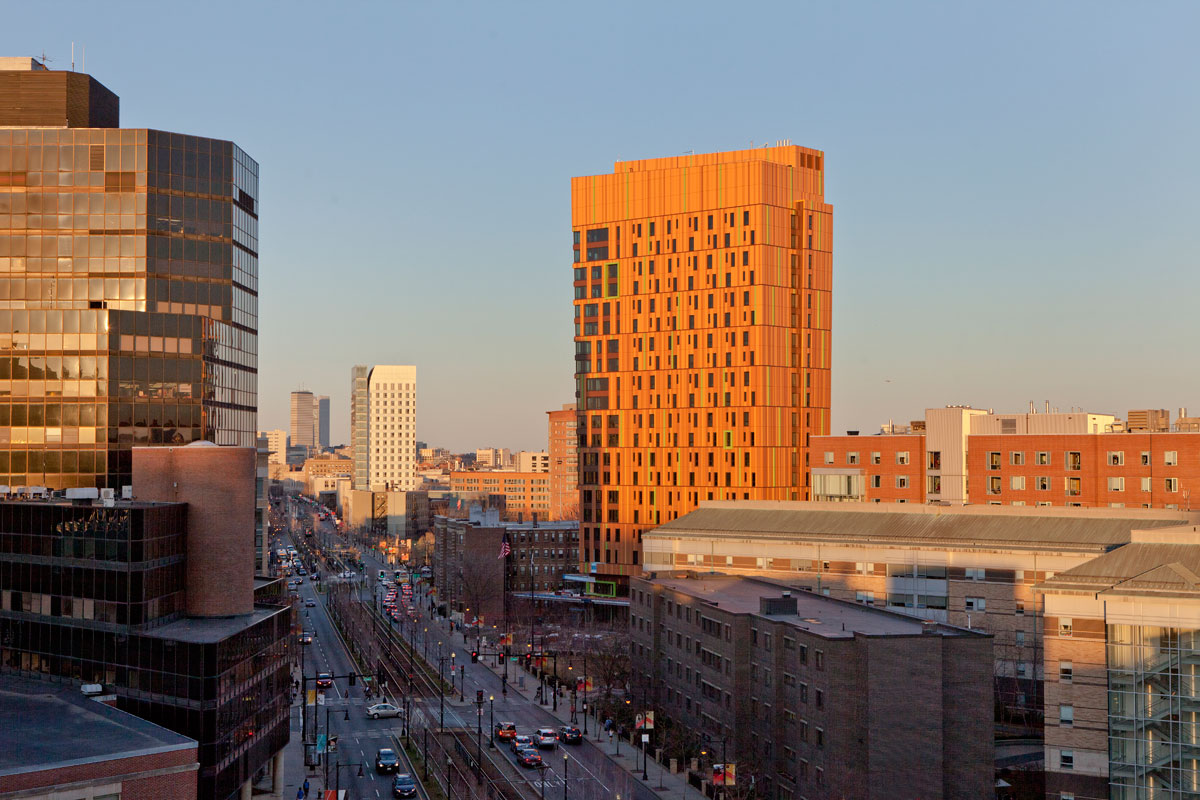 In an interview with www.MASCO.org, Roy said: “The colors range from gold to rust, creating a woody, bark-like effect.  Varying the depths of the panels imparted a sense of texture and physicality.  The green panels suggest leaves.  Finally, the base of the building is curved like the trunk of a tree and the top flares out.”

The Alucobond panels were fabricated and installed by Lymo Construction Co., Inc., of Merrimack, N.H., with the Lymo 3000 Rainscreen system, which allowed the Alucobond panels to be set out from the building in depths ranging from 2 inches to 7 inches. “This building is not flush,” said Dan Lynch, president, Lymo Construction Co.  “This design is reminiscent of a tree in New England in the fall when the leaves are starting to change but specks of green remain.”

Lymo Construction worked with project managers at general contractor Suffolk Construction Co., Inc., of Boston, to bring the project in under budget.  (Total cost of the project was $61 million, including $52 million in construction costs, according to Roberts.) The Boston office of Simpson Gumpertz & Heger (SGH) provided engineering support for the building envelope. 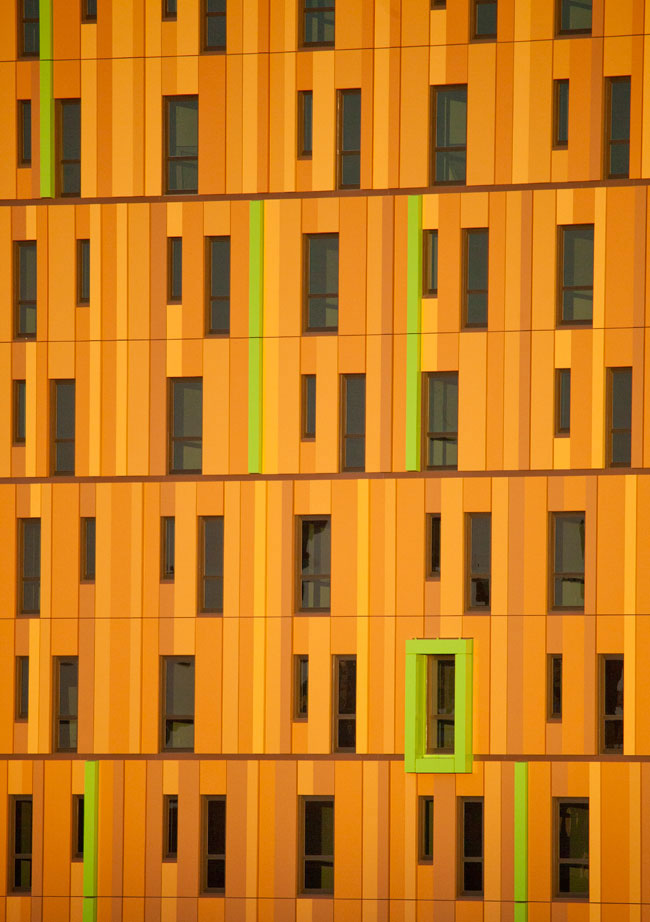 “I was happy to learn that these panels were Alucobond,” said Roberts.  “When I was a practicing architect, I designed a lot of buildings with Alucobond. The product works well.”

“Our preference is to use Alucobond based on its history in the marketplace and the product’s quality,” said Lynch. “Alucobond has a good reputation with building owners and architects. The MassArt design team was highly satisfied up front by the effort put into color-matching by Alucobond and Lymo personnel.”

Lymo was able to fabricate the majority of Alucobond panels from theoretical dimensions approximately four months in advance of their installation on the construction site, according to Lynch, who said panel installation began in June 2011, with the majority of the tower completed in January 2012. In addition to the seven custom colors and five gloss levels, the Alucobond panels were fabricated in varying widths ranging from 8 inches to 3.5 feet.

“There were probably 400 to 500 different panel options,” said Lynch.  “We had to organize these panels in crates for installation on each floor.  The panels had to be put in the correct order.  The logistics were very demanding. … Most jobs repeat panels.  The different colors, widths and depths of the panels used on this job made installation planning challenging.  Our system of crating the panels for installation by floor removed all of the guesswork.”

Even with the best logistics, the installation of so many different panel options still resulted in the need to change a few panel placements. 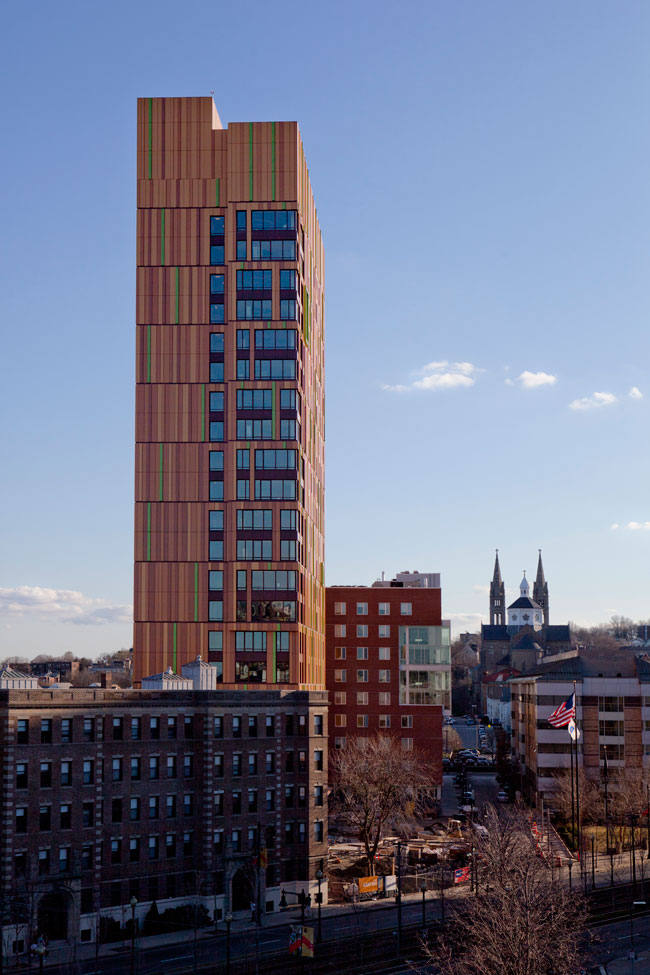 “Lymo Construction went above and beyond on this job,” said Boley.  “When we’d point out a panel, they’d immediately pull it off and replace it.  At the end of the day, we’d see construction crews looking up at the building.  And, when it was completed, everyone started getting compliments.”

“Everyone involved with the design and construction of this building is very proud of it,” said Roberts.  “They wanted it to be right. … This building can be seen from all over Boston.  It’s put MassArt on the skyline, on the map and on everybody’s mind.”