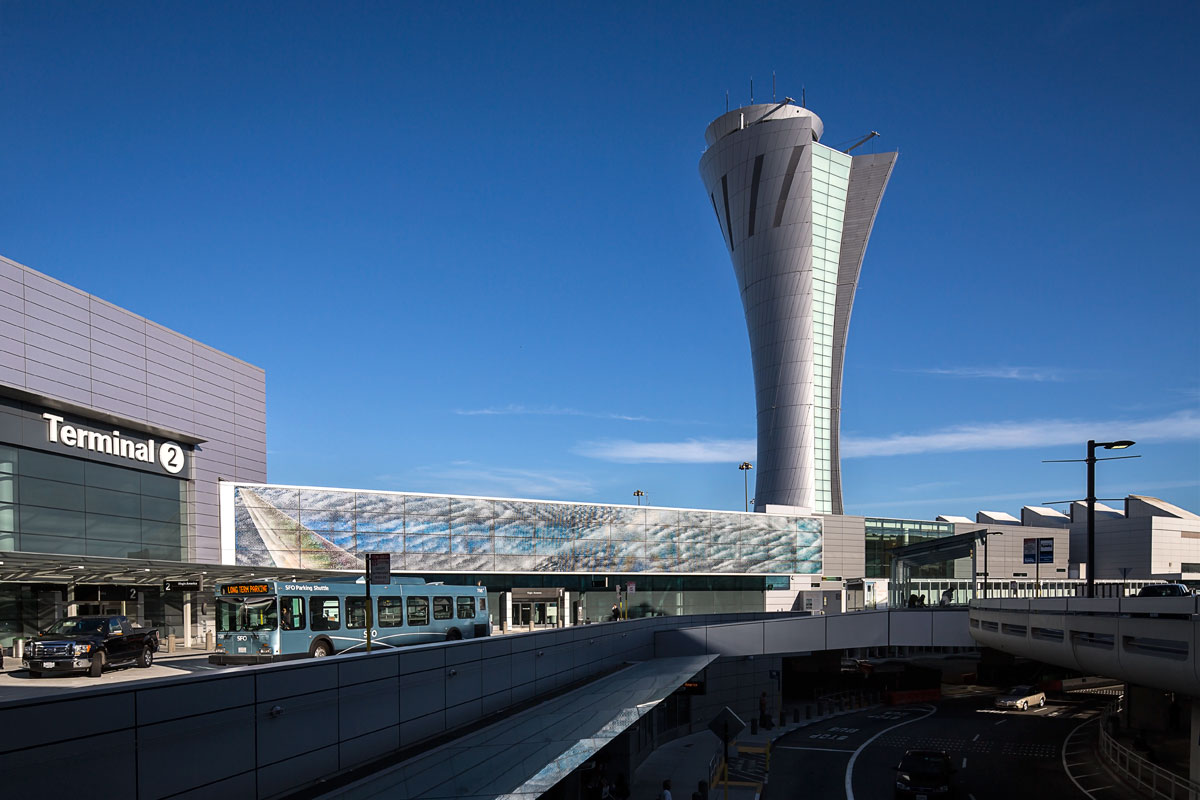 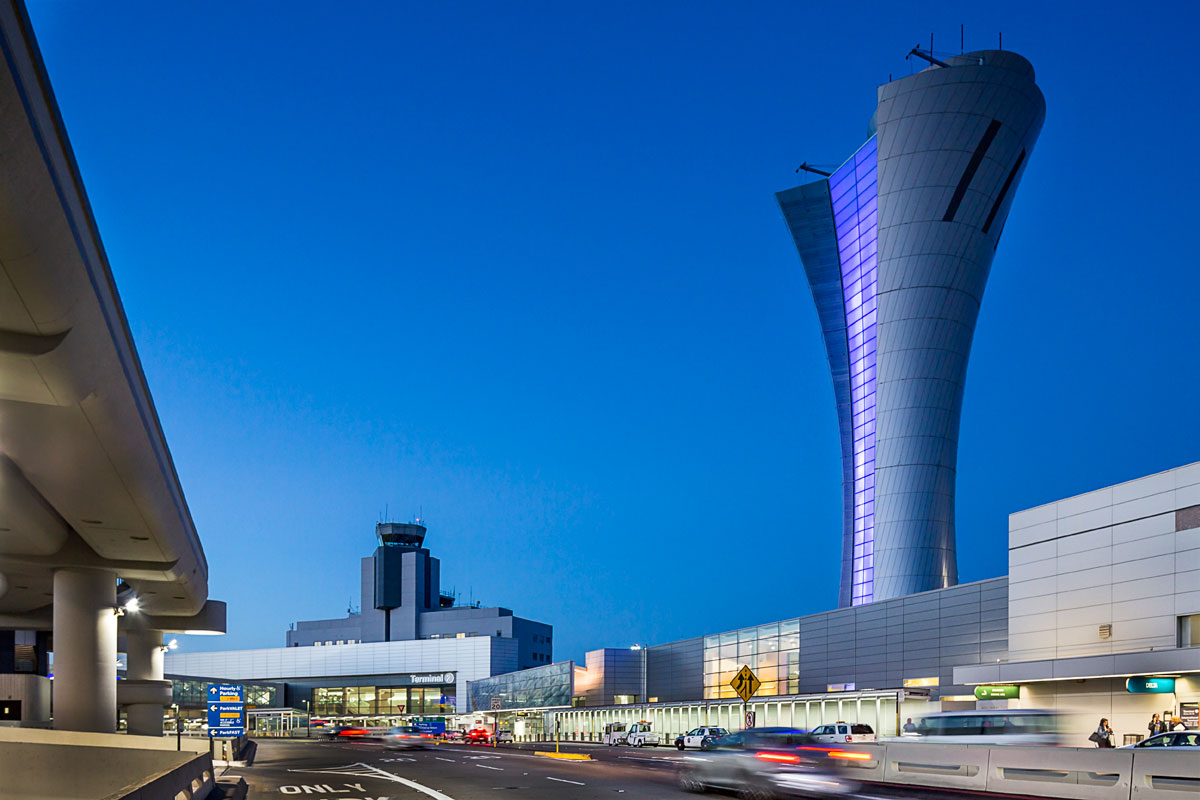 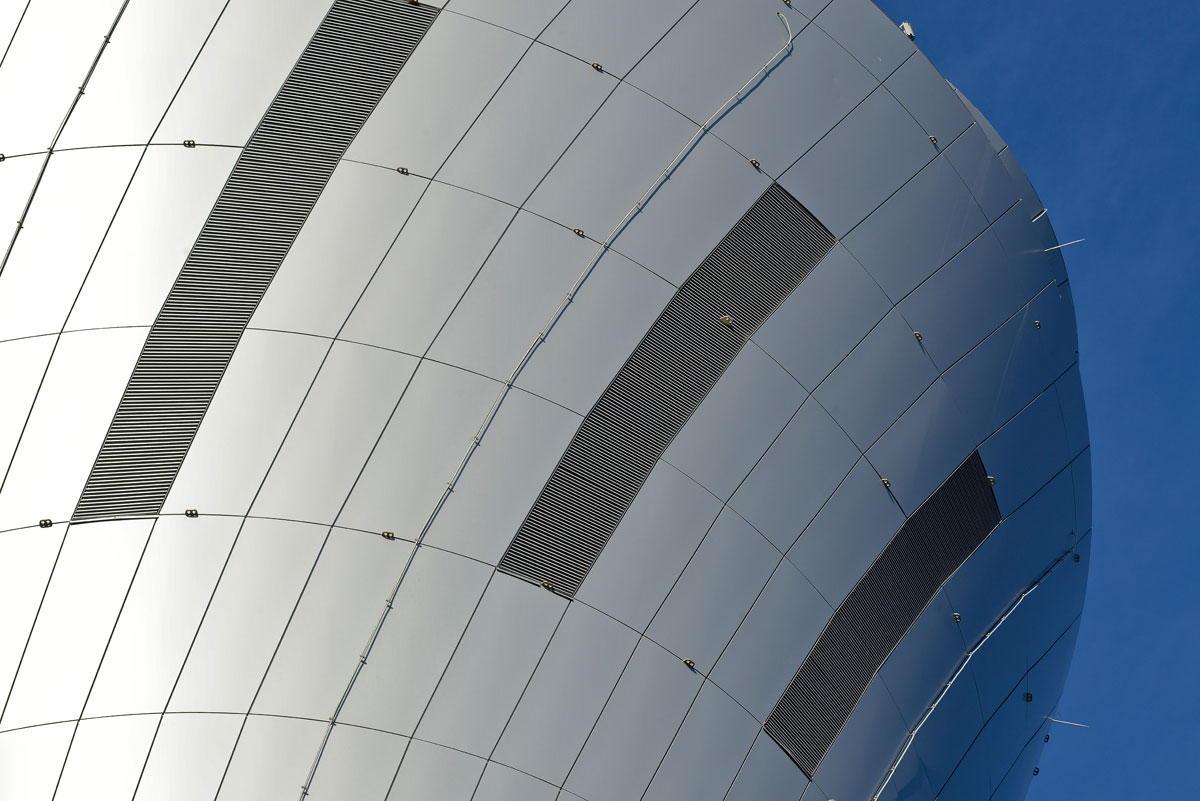 The new tower – which is designed to withstand a magnitude 8.0 earthquake and remain operational – will replace the current airport control tower built in 1981 that does not meet stricter seismic standards. The new air traffic control tower is the tallest vertical self-centering post tension concrete structure in the United States and is designed to achieve LEED Gold certification from the U.S. Green Building Council. 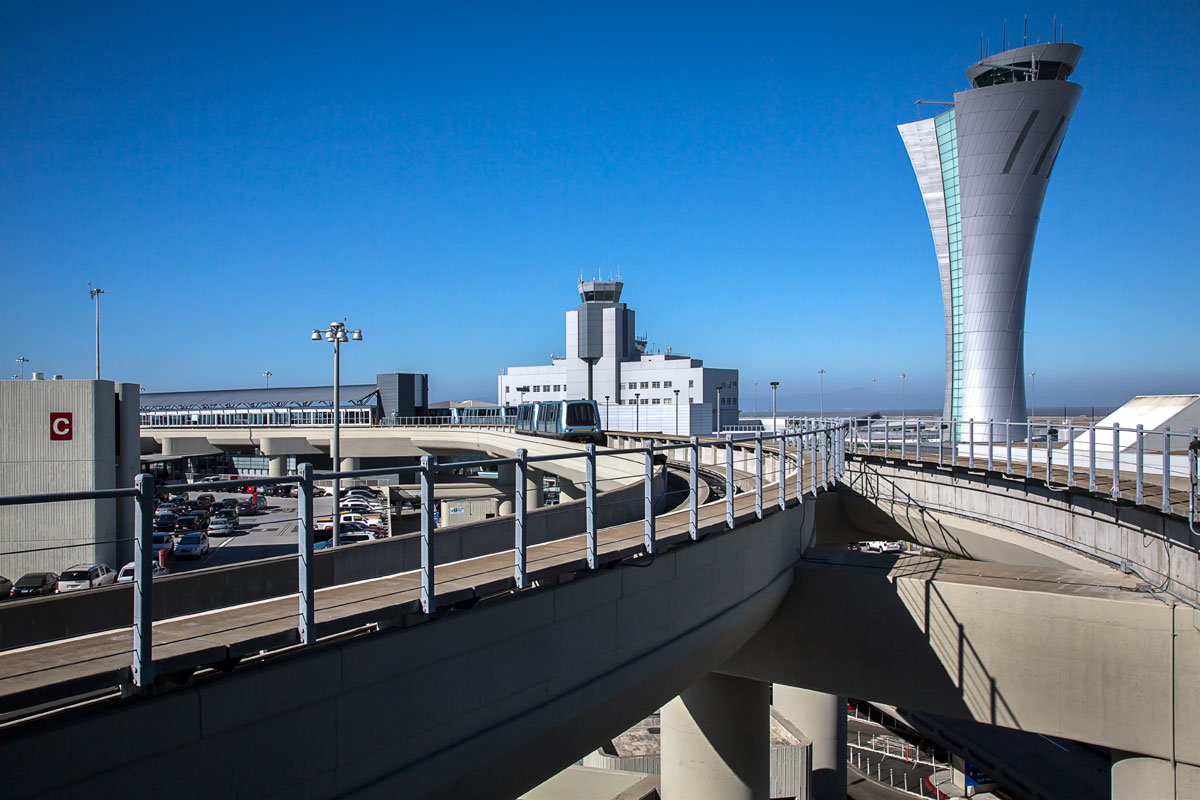 A total of 10,000 square feet of formable 4mm Alucobond® Plus aluminum composite material (ACM) in the custom SFO Silver color clads this spiraling torch-shaped structure. (Recyclable Alucobond – which is manufactured with both post-manufacturing and post-consumer content – contributes LEED credits to building projects.)

The west face of the airport control tower is “opened” vertically with a backlit glass façade that stretches 147 feet in the air to create a local visual landmark. Situated above a new three-story FAA office building and walkways connecting Terminals 1 and 2, the open-core design allows passengers to gaze directly up into the tower through corridor skylights to view the cascading waterfall lighting. 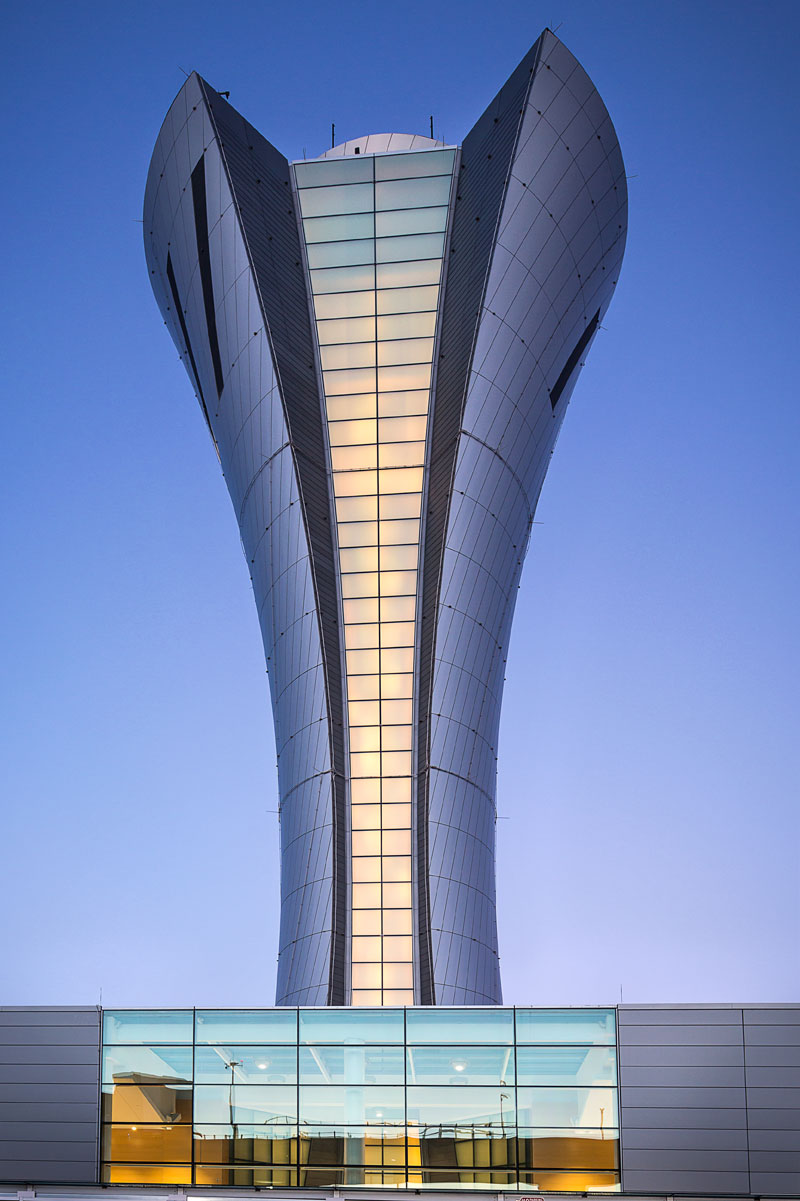 “The tower lighting can be changed based on the mood of the airport,” according to Mark Costanzo, P.E., project manager, SFO, who said the façade’s changing LED colored lighting transforms the tower in recognition of holidays and special events.

This iconic tower concept design was the collaborative work of SFO and Los Angeles-headquartered HNTB Corp., which served as master architect for the project. Detailed design work was completed by Denver-based Fentress Architects, which served as architect of record and worked in a design-build capacity with general contractor Hensel Phelps Construction Co., of San Jose, Calif. Walter P Moore, of San Francisco, served as structural engineer for the tower. 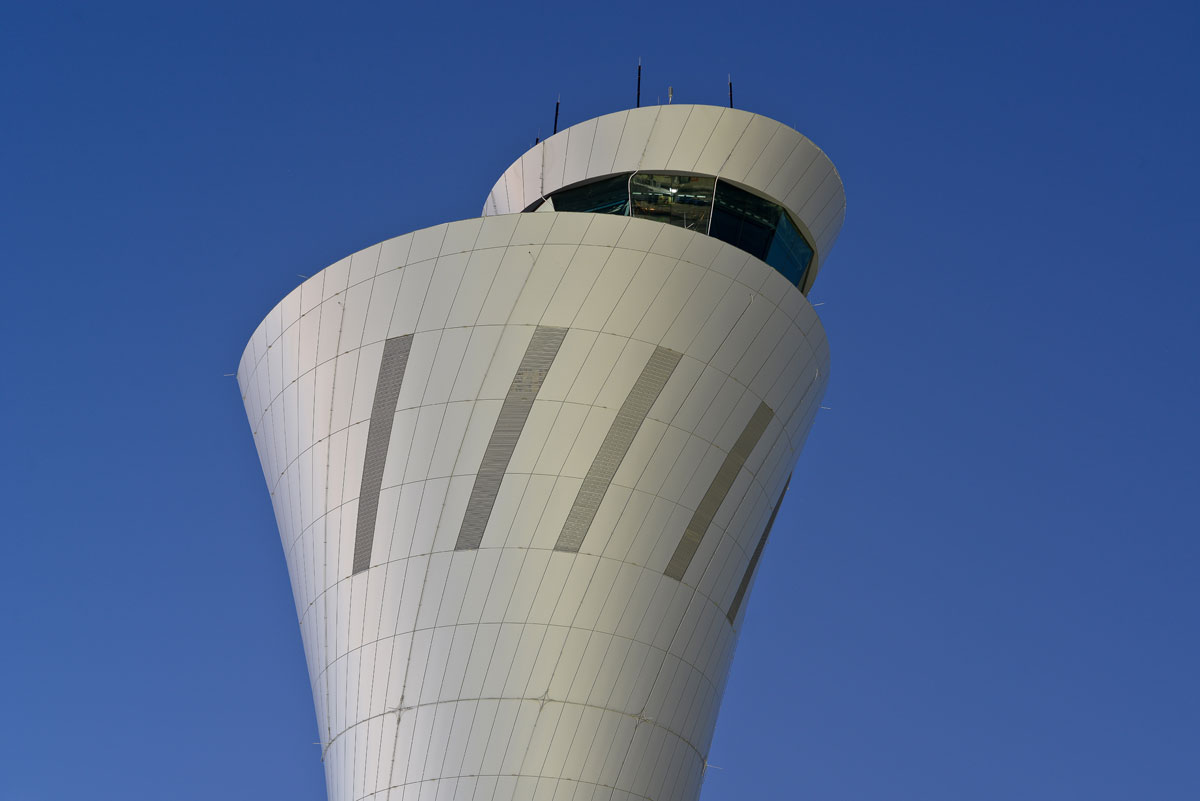 In developing the tower’s design – which began in 2010 – SFO and HNTB personnel reviewed Olympic torch designs through the years as well as tower precedents from around the world. The resulting design reflects the SFO brand as an iconic symbol that is both “elegant and timeless in approach,” according to Paul Kim, AIA, NCARB, project manager, HNTB.

“This idea is manifested in the sweeping torch form and is the impetus for opening of the tower shell to expose the ‘core’ with a backlit glass façade, which greets passengers arriving along the upper-level roadway and SFO’s AirTrain,” said Kim. “The intent was to provide a tectonic and elegantly detailed façade with a subtle but dynamic skin with spiraling aluminum panel joints around the conical surface. We also saw an opportunity with the tower’s location. Unlike towers at most airports, the SFO tower is located immediately adjacent to drivers and pedestrians. We wanted people to experience the tower up close as well as from afar.” 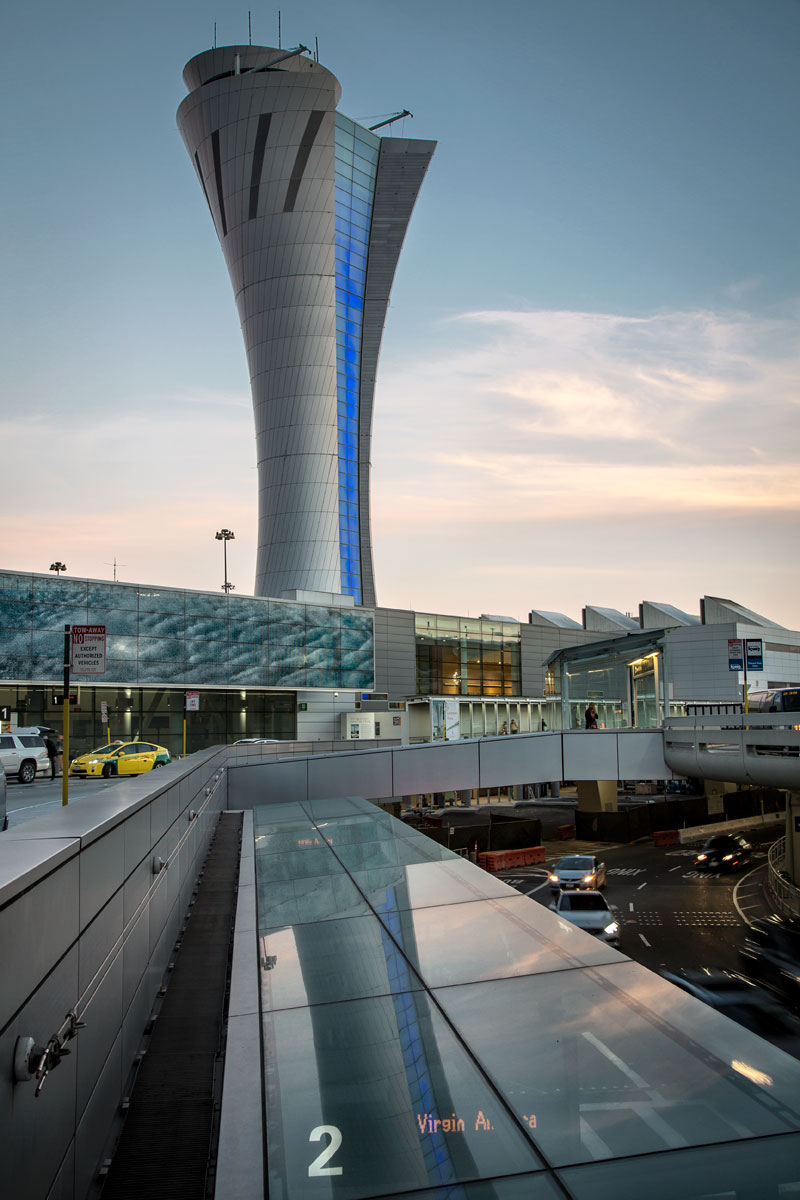 The torch design is reminiscent of the historic pier torches utilized in the 1800s to guide ships to port in San Francisco Bay, according to Curtis Fentress, FAIA, RIBA, president, CEO and principal-in-charge of design, Fentress Architects.

“The tower was designed as an iconic symbol for the airport,” said Fentress. “It needed to be a long-standing building that was dramatic in form to serve as an airport logo but also symbolic of stability for passenger flights.”

HNTB architects worked with the FAA to develop the offset-cab design, which gives the tower its forward leaning silhouette, according to Kim, who said both parametric modeling software and three-dimensional (3-D) printed models were utilized to create the tower’s design. 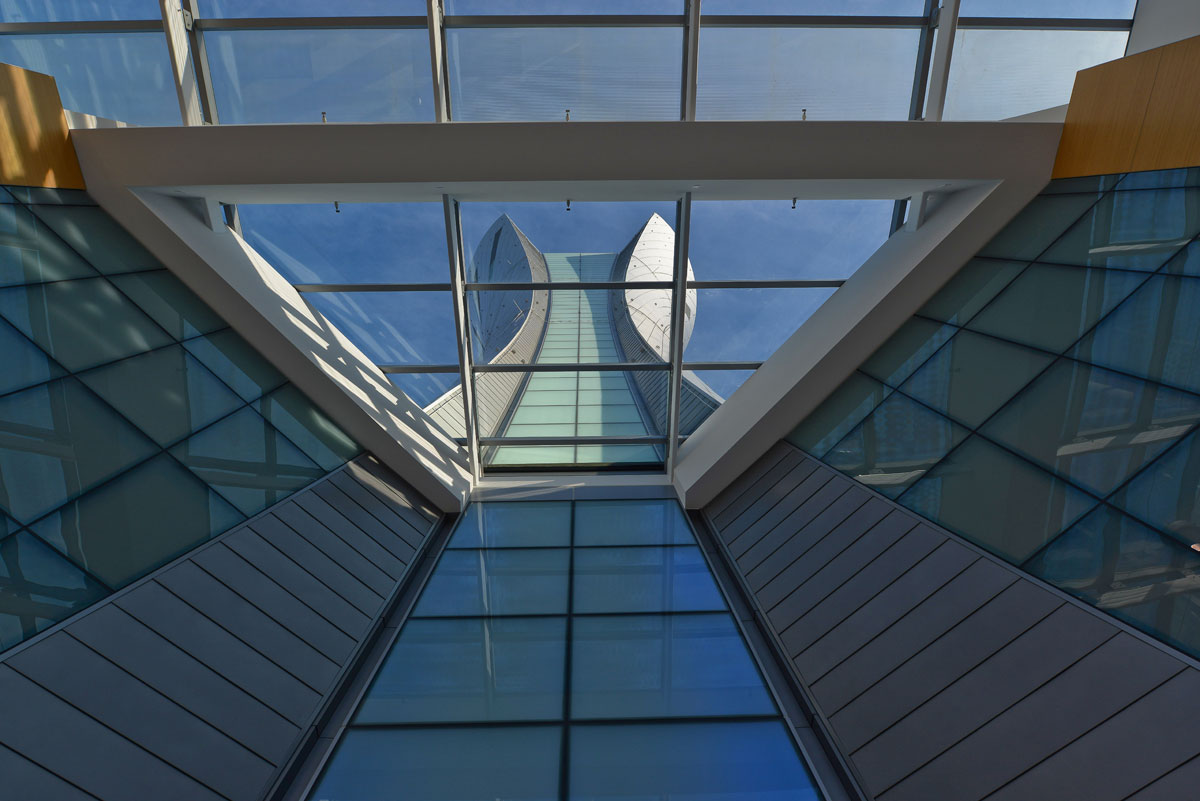 “We felt that Alucobond would be better suited to handle the specific challenges presented by the tower’s geometry,” said Paul Dalzell, operations manager, Keith Panels Systems (KPS). “We knew that Alucobond had much more flexibility and could be formed into these complex shapes.” 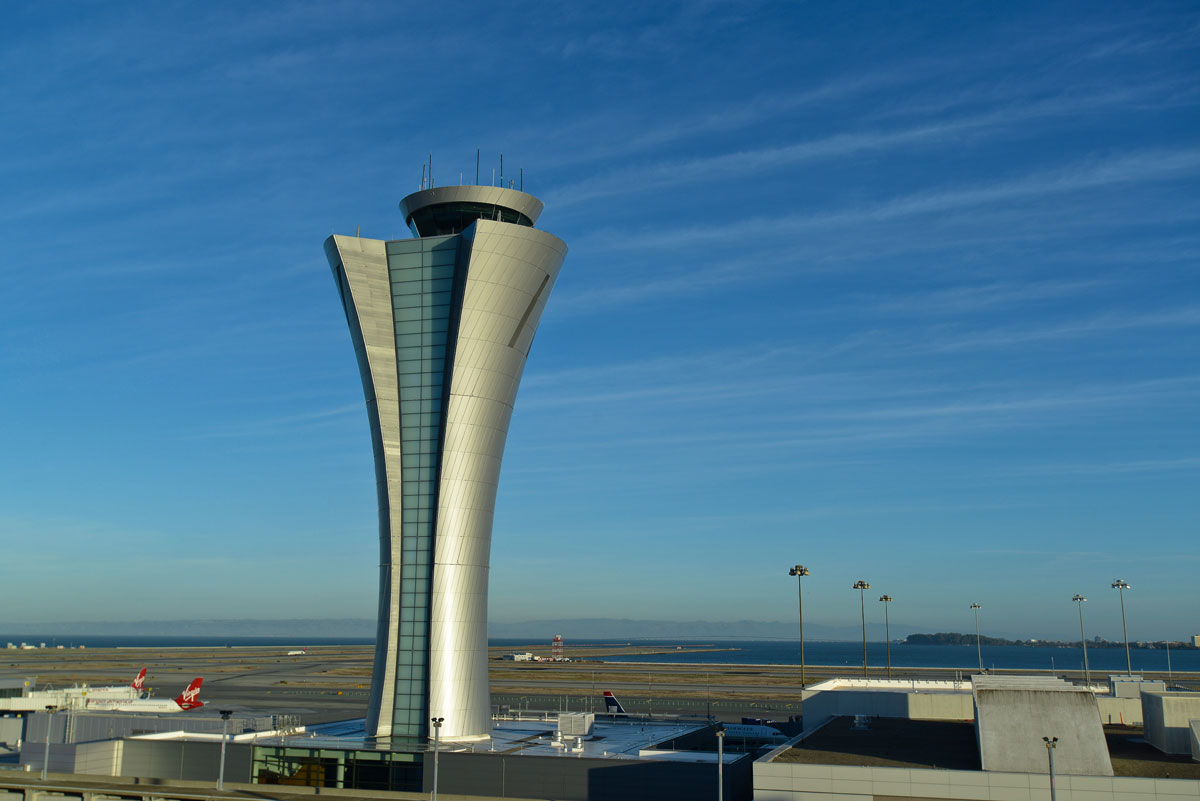 “Alucobond was a material that could carry the shape of the building with an outward appearance that is sleek and dynamic,” said Fentress. “It gives a futuristic quality to the building. Technically, it was able to create all of the joints and worked well with the complex structural engineering designed to ensure that this building will be there after a seismic event.”

“When we started modeling and prototyping, we discovered the tower geometry was dictated by a set of very specific mathematic rules,” said Dalzell. “This allowed us to confirm every dimension on each panel pulled from the model mathematically to ensure the panels would fit on site. This was an exhaustive process requiring manual input and calculation of hundreds of points along the perimeter of each panel. While this process validated the theoretical model and was used in prototyping, it wasn’t practical for full-scale production. We searched everywhere for software that would provide an automated flattening solution but found nothing. In the end, KPS employed a developer to build custom software for us.” 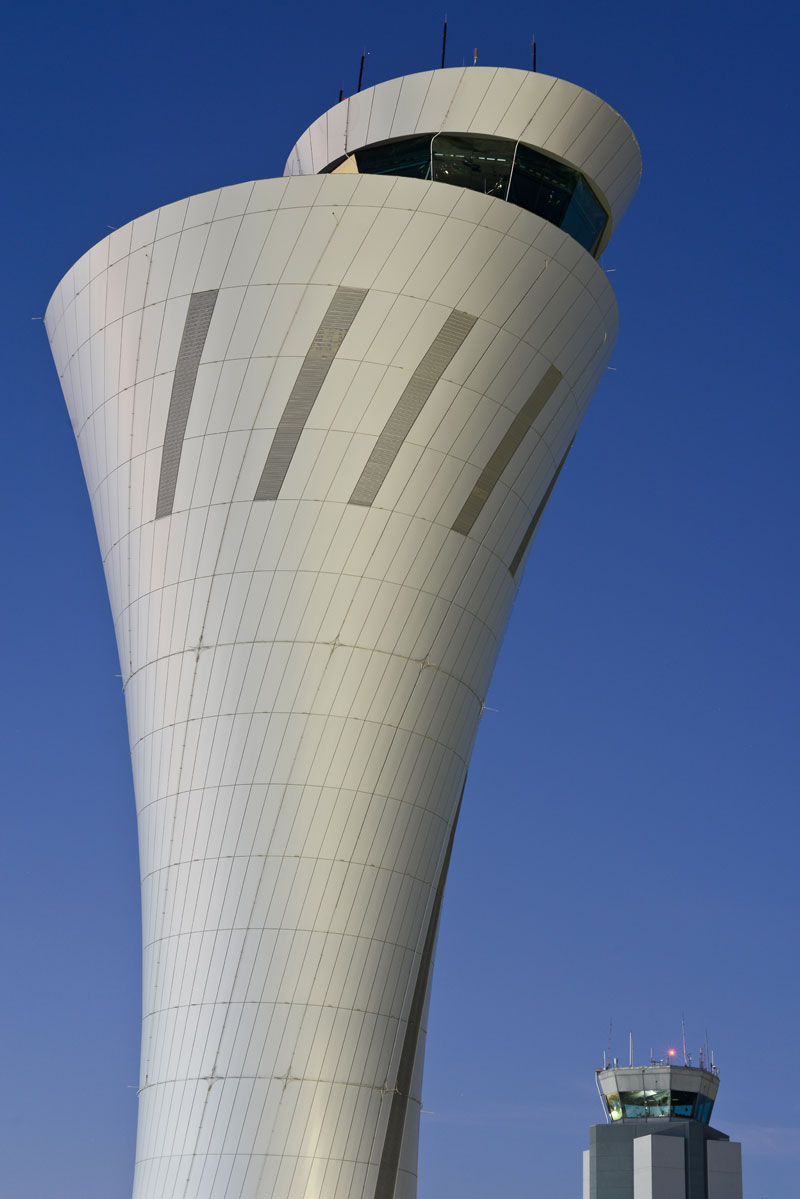 “This was by far the toughest job we’ve ever done as a company, and the most extreme in terms of geometry and modeling.” said Dalzell. “A lot of credit goes to the incredible team at Pacific Erectors in overcoming equally great challenges during panel installation, including dealing with hundreds of anchors and lightning protection penetrations located in reveals with only 1/16-inch tolerance.”

Dalzell described the challenge faced by Pacific Erectors’ employees in correcting site tolerances during panel installation while hanging from a swing stage as “monumental.”

“In the end, every panel fit,” said Dalzell. “Every single panel was built from the mathematically corrected Revit model without relying on field dimensions. That’s an incredible testament to the capability of BIM-based construction.”

The design team is “very happy” with the cladding results, according to HNTB’s Kim.

“The shimmering skin adhered perfectly to the complex geometry of the tower,” said Kim. “It is both fresh and unique in its fabric-like form while simultaneously linking you back to images of airplane fuselages and turbines and other metal-clad buildings at SFO. In addition, the sleek façade maintained the desire to remain contextual but not just match the existing adjacent metal panel terminal buildings.”

HNTB turned over bridging documents to Fentress Architects in May 2012 and construction was completed in January 2015.

“This was a very constrained site within an operational airport; construction was very tight in terms of scheduling and erecting the tower,” said Fentress, who credits the project’s successful completion to “enormous collaboration and teamwork” among architects, structural engineers and construction contractors.

“BIM software was a key component in creating this building’s unique shape and achieving its complex geometry,” said Fentress. “There were not many materials that could have been used to realize this tower’s very sleek, dynamic appearance. … This really was a unique, once-in-a-lifetime project.”

The new SFO airport control tower – which was constructed at a cost of $80 million as part of the airport’s $120-million tower/FAA office building/corridor project – was turned over to the FAA in May for equipment installation, testing and training with the goal of being operational in October 2016.