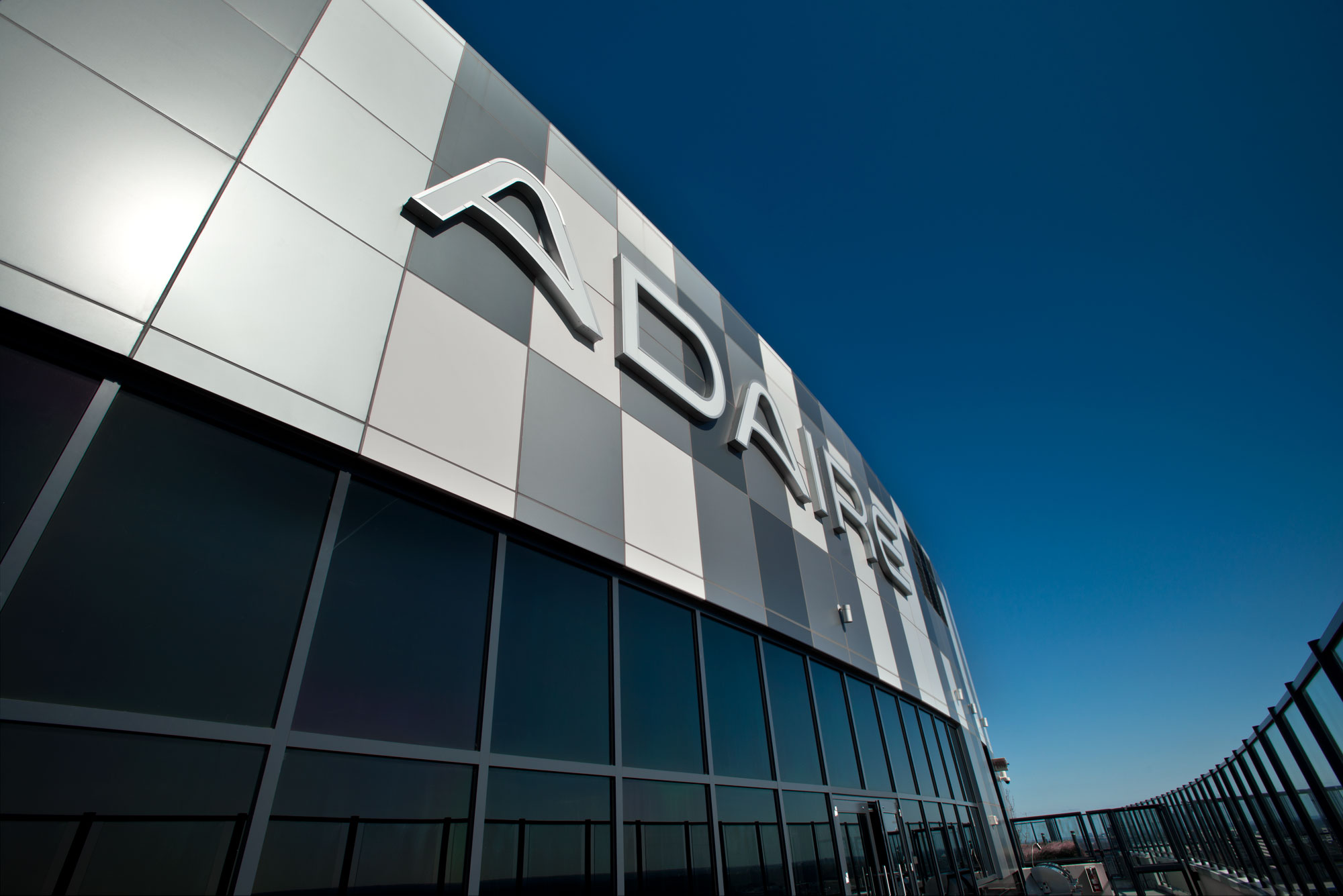 As one of the first high-rises constructed in the fast-growing Tysons unincorporated area of Fairfax County, Va., Adaire, a mixed-use residential community, stands out not only for its 35 stories towering into the sky but for its striking ellipsoidal design and modern facade. 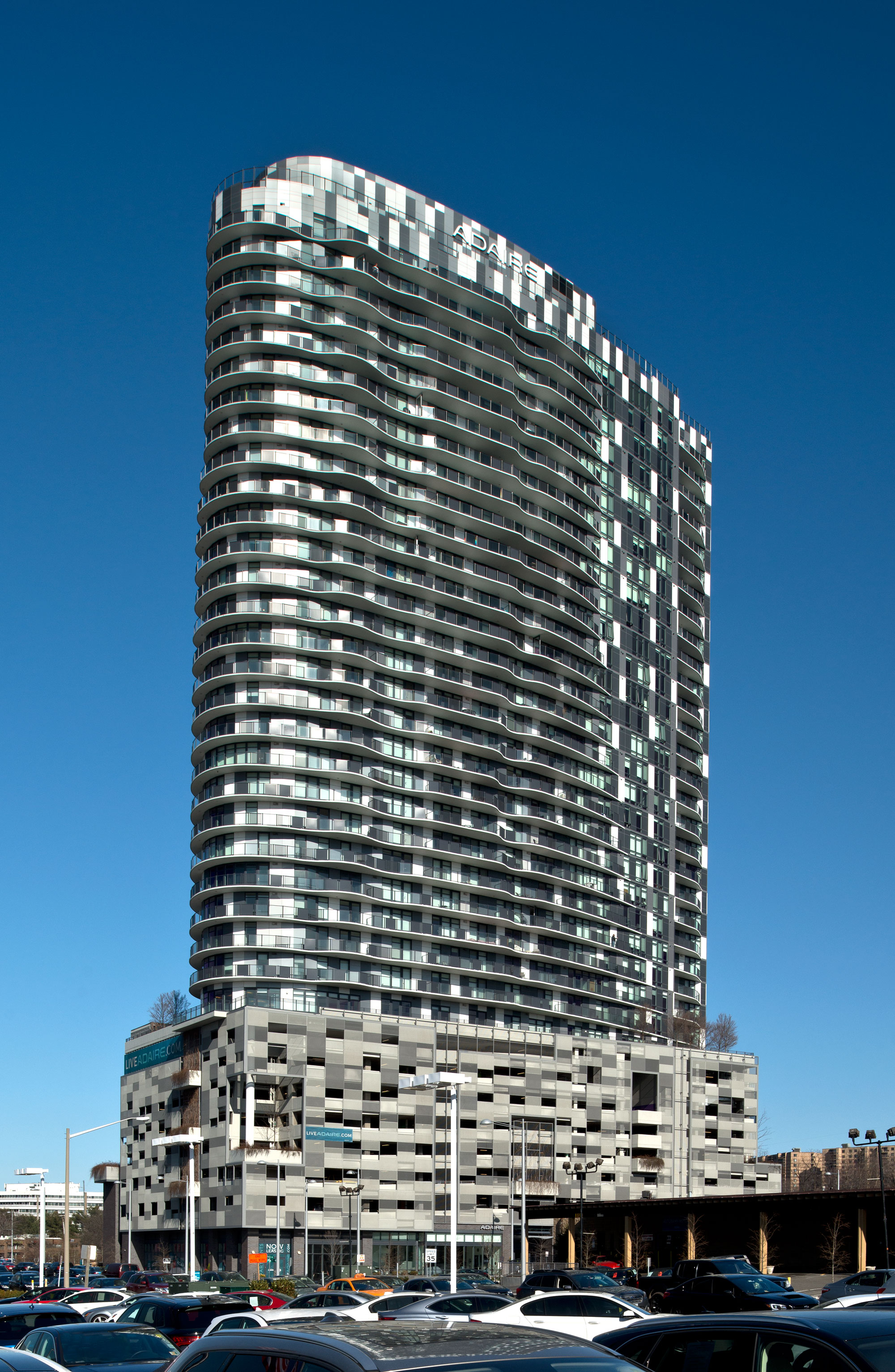 “Normally, towers are L-shaped or C-shaped to create courtyards,” said Sacha Rosen, AIA, principal, R2L: Architects. “But, we had great view opportunities and we wanted residents to be able to see the mountains. The oval design makes it easier to see past other buildings. … Since Adaire was one of the first tall buildings in the neighborhood, we wanted to create a striking appearance that would look good from all directions. It’s also quite striking from the air; it’s visible from flights out of Dulles (International Airport).”

Adaire is located less than 20 miles from the District of Columbia – and within walking distance of the Spring Hill Metro station – and is 50 miles east of the Blue Ridge Mountains. The 600,000 square-foot community features a 400-unit residential tower over a rectangular retail-and-parking podium and includes 35 stories above grade and two below. 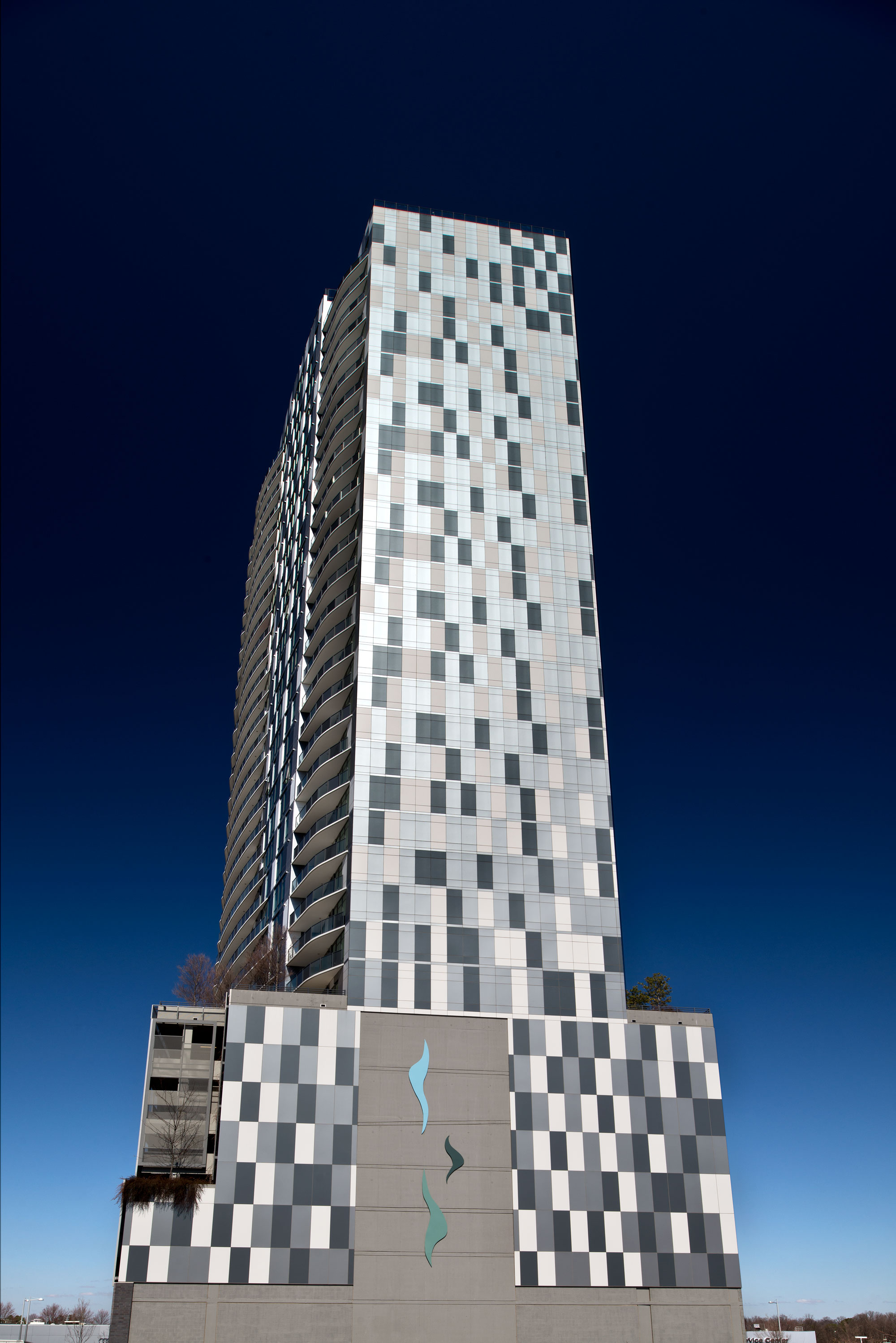 The residential tower’s unique oval design is accentuated with sweeping white balconies and a modern façade of glass mixed with multiple custom colors of Alucobond® PLUS aluminum composite material (ACM) by 3A Composites USA installed in a random pattern. 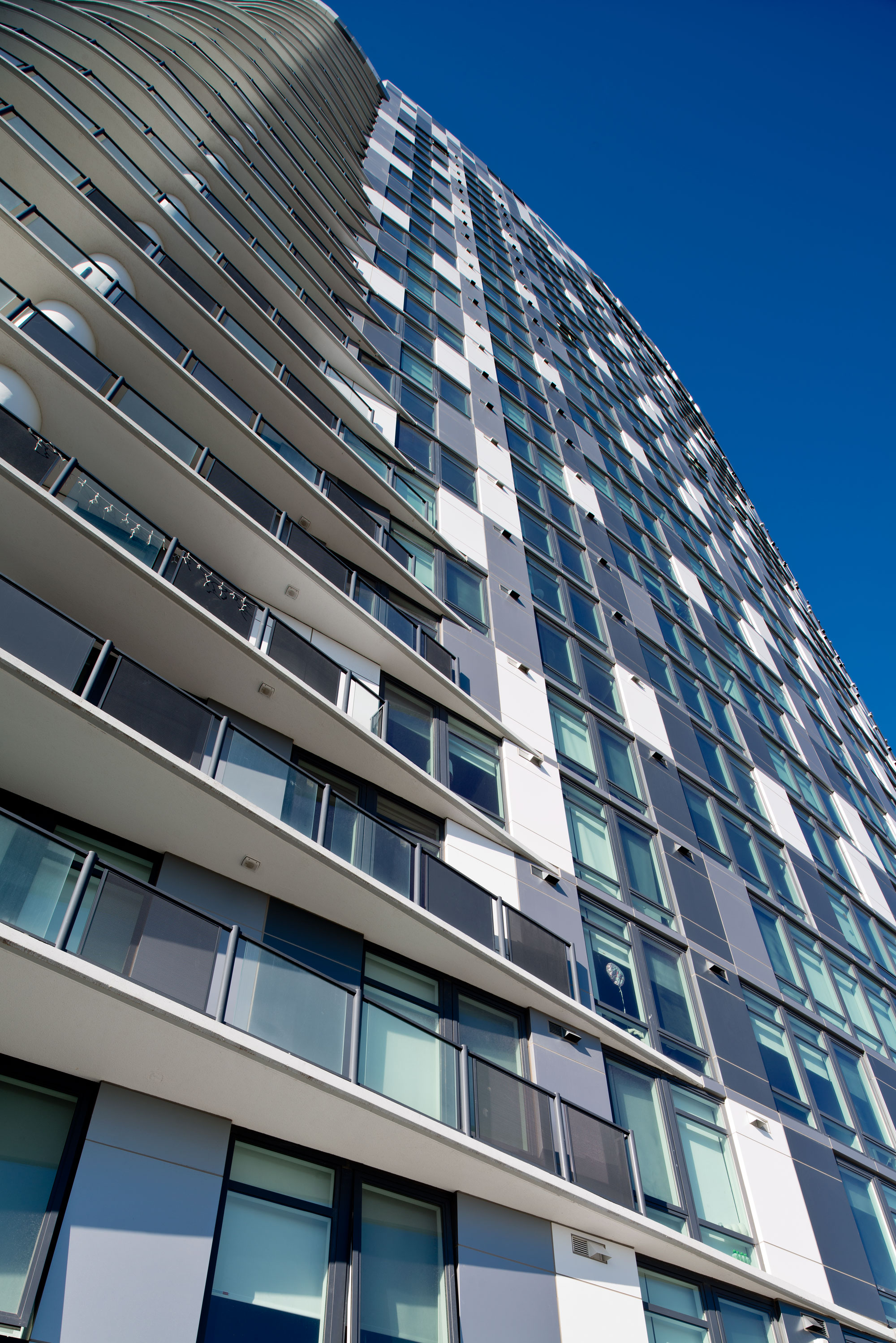 Since Alucobond was introduced more than 40 years ago, architects have turned to this ingenious patented product to create some of the world’s most visually striking modern structures. Alucobond is specified by architects as high-tech metal cladding for buildings and is used to create custom design elements as well as corporate identity structures and signage. 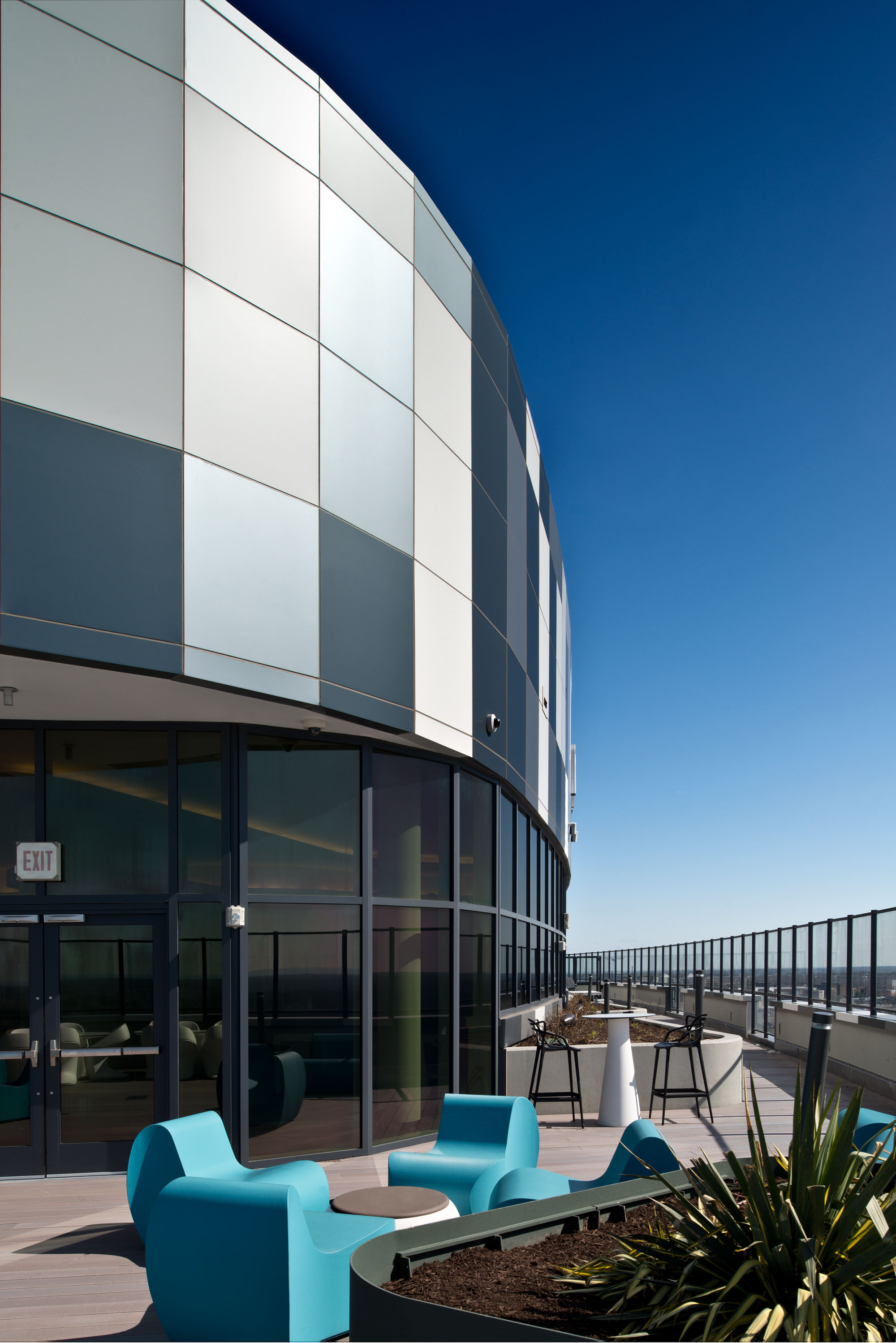 “The ownership group wanted a façade that would go well with the color of the glass, so we were careful to make the rest of the building work well with the glass,” according to Rosen, who said R2L: Architects worked with window manufacturer Peerless Products, Inc., of Fort Scott, Kan., to create a custom design with special mullions for the ellipsoidal residential tower. “The angles of the panels also were different. Digital printing was utilized to design the joints.”

John Moriarty & Associates of Virginia, LLC, based in Arlington, Va., served as general contractor for the project. 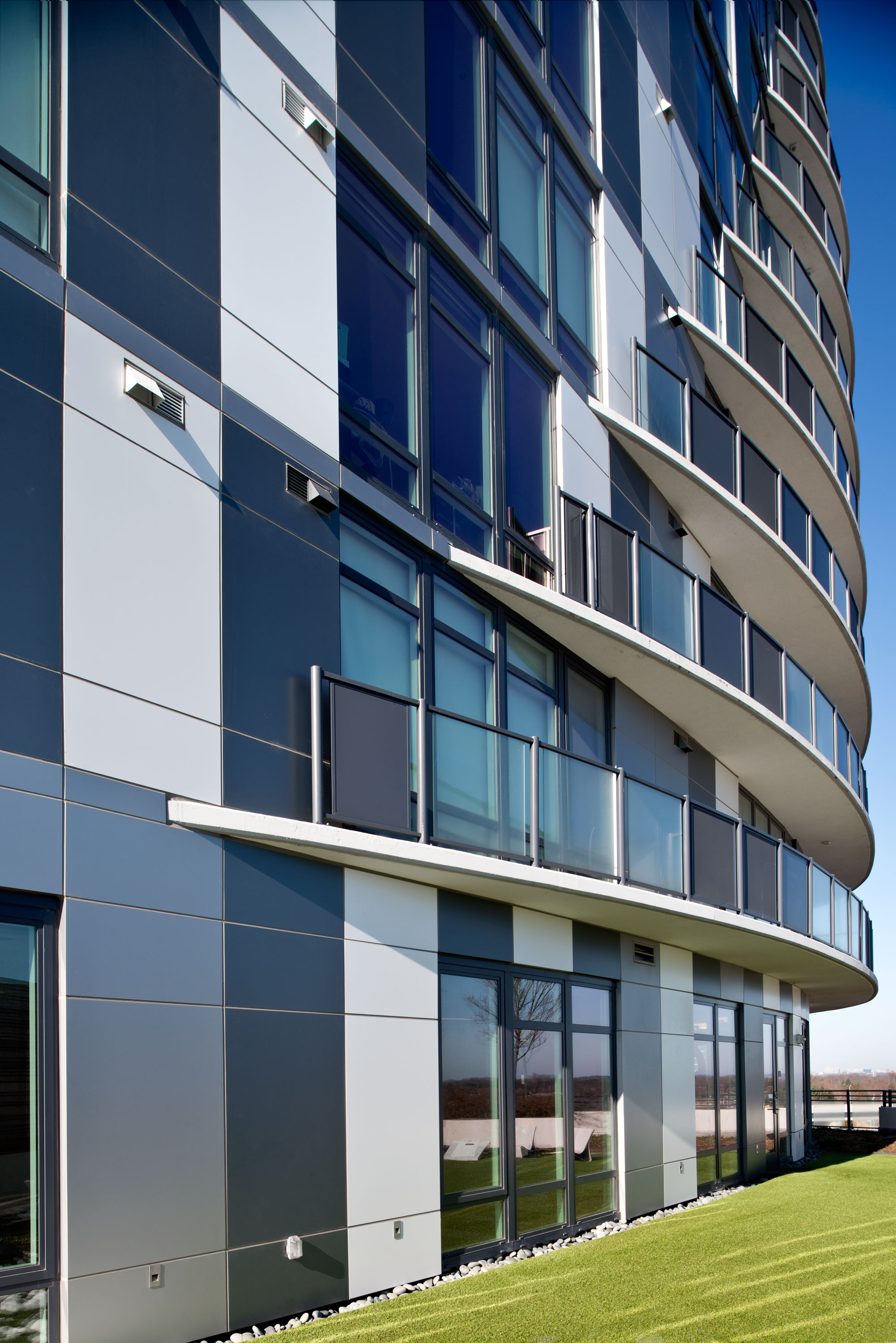 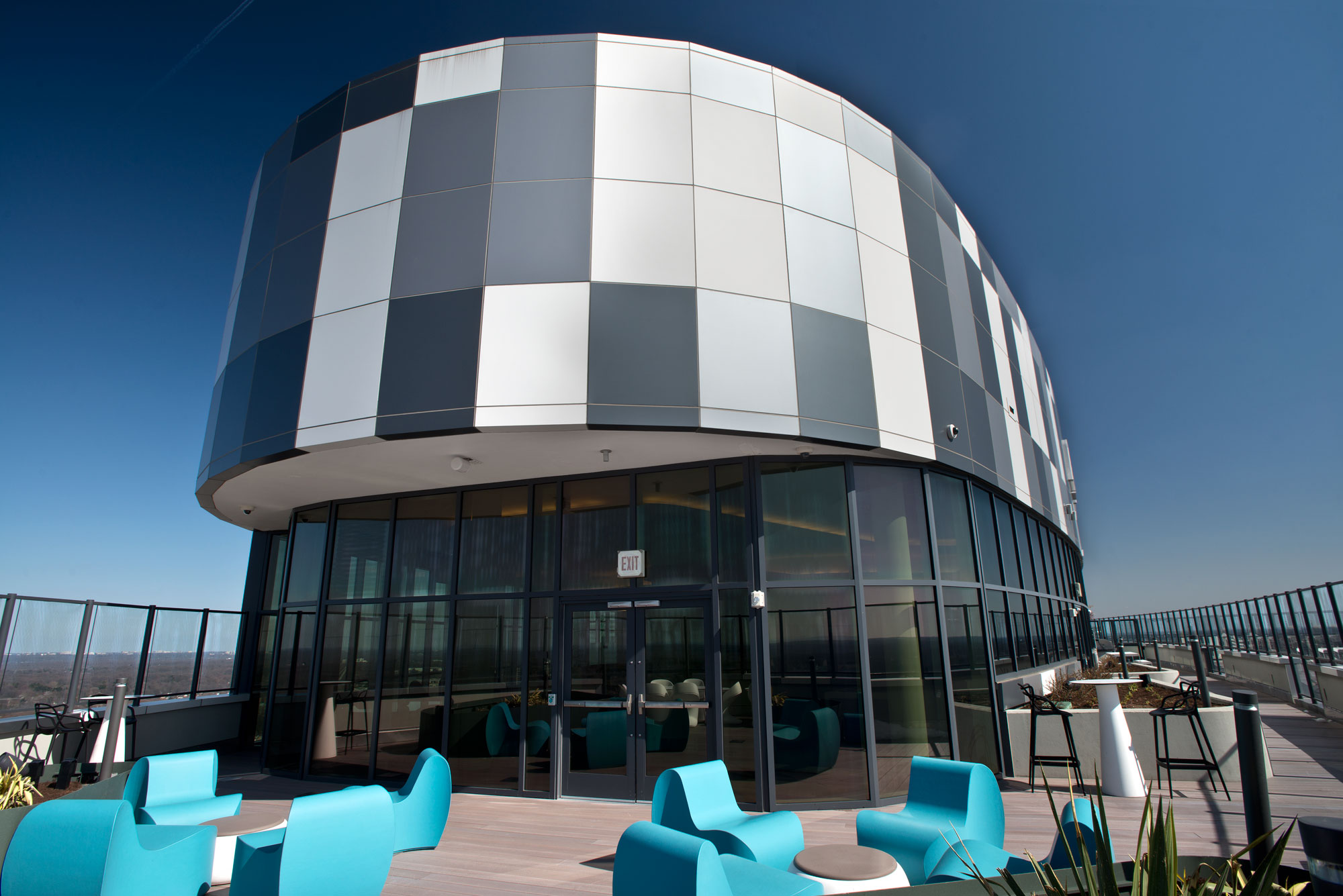 “The Alucobond panels were fabricated with more of an ellipse rather than a true radius,” said Bennefield. “They change a few degrees as they return back to the window. There are 10 different angles on the panels as you walk around the building. The east wall is a pure cladded wall.”

Custom Walls & Windows fabricated approximately 13,800 Alucobond PLUS panels, with the three custom colors installed in a random pattern on the eighth floor and above. Bennefield credits a good labeling system during panel fabrication and an excellent set of shop drawings for the nearly flawless panel installation in which only four panels needed to be moved to their designated locations.

Custom Walls & Windows focused on completing a speedy fabrication and installation of the Alucobond PLUS panels, beginning fabrication during the summer of 2015 and completing panel installation 11 months later. The first residents began moving into the Adaire apartments in June 2016. 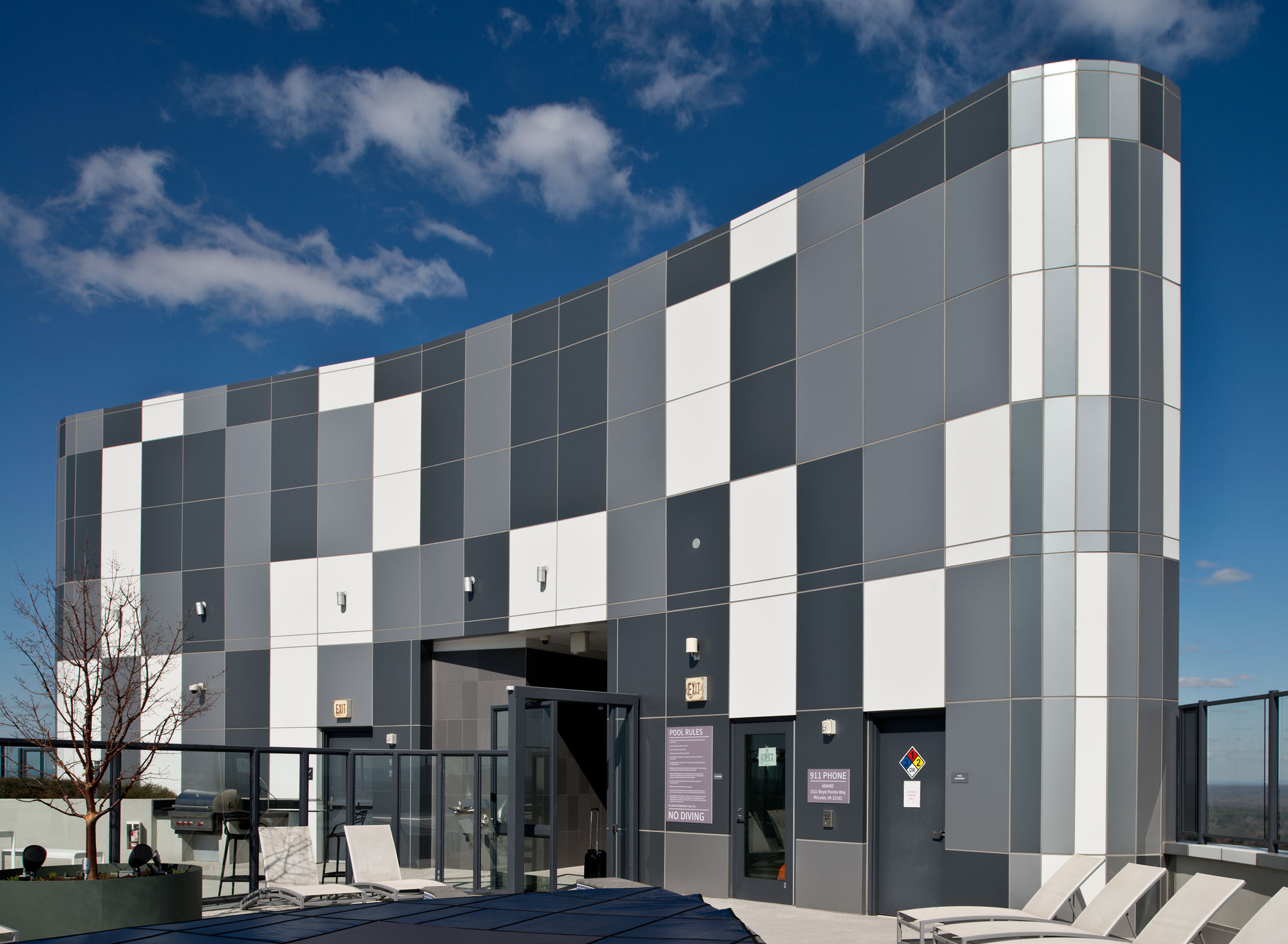 “As we were finishing the exterior, work was being completed on the interiors,” said Bennefied. “They were starting to move people into the lower floors when we were completing the exterior.” 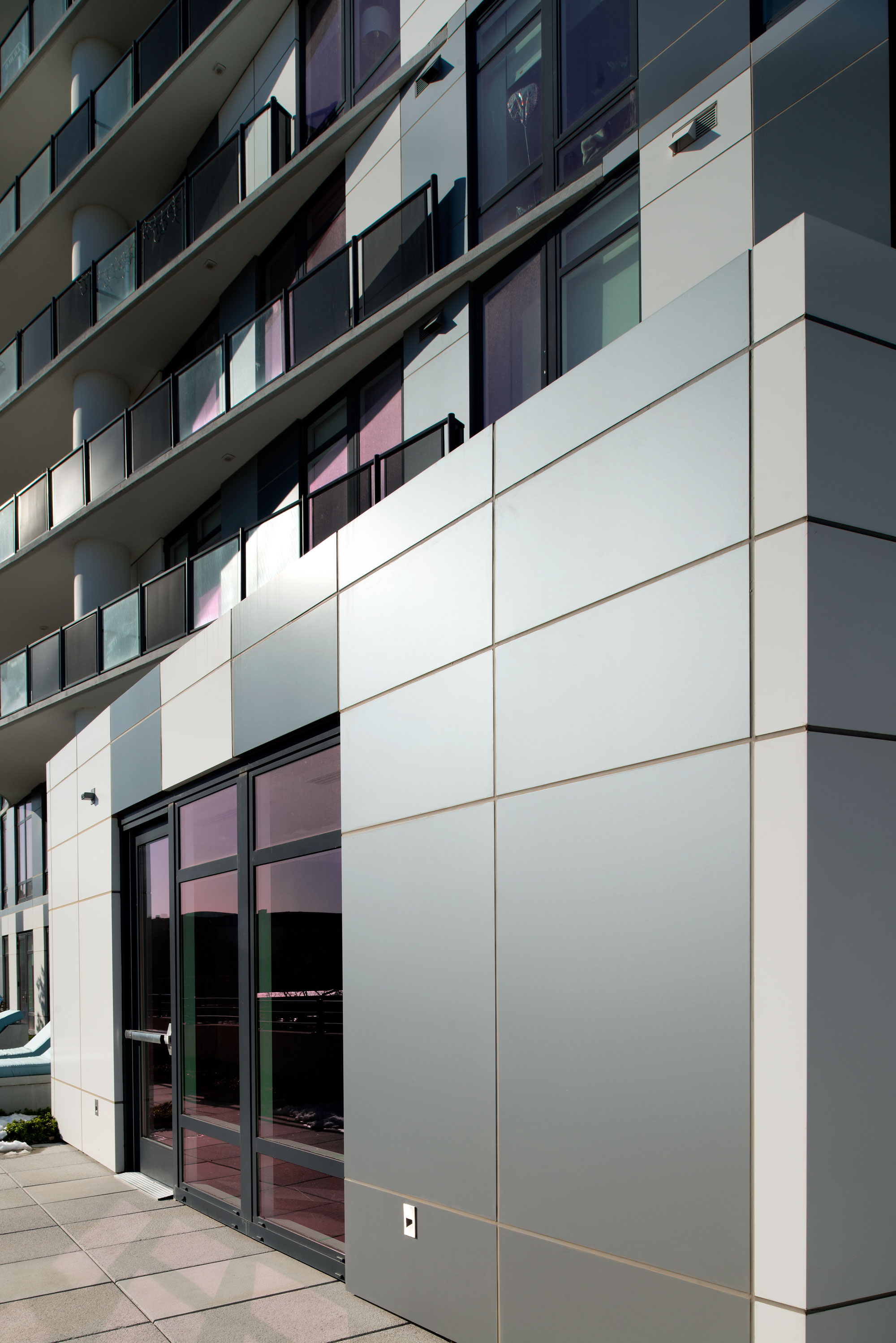 “The Alucobond has been great,” said Rosen. “It offered a lot of flexibility in the design and it installed very well. All of the panels came in as expected. It’s also weathered really nicely. The area’s weather is tough; it can get very hot and very cold.” 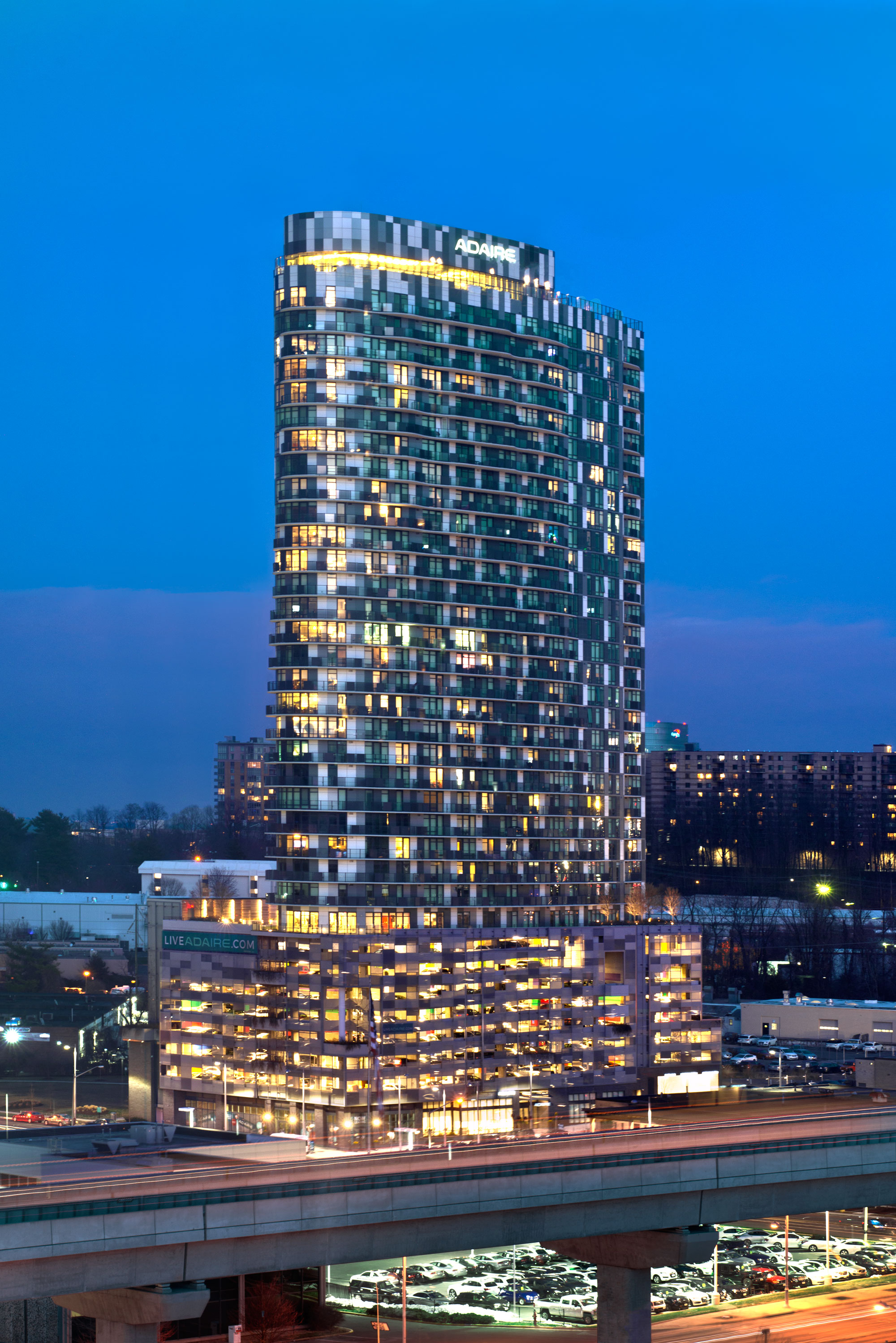 The Adaire multi-use residential community – which was approved by the Fairfax County Board of Supervisors – “has received accolades for both architectural and bird-friendly design, establishing high standards for future phases of the Spring Hill Station master plan,” according to an R2L: Architects’ statement.