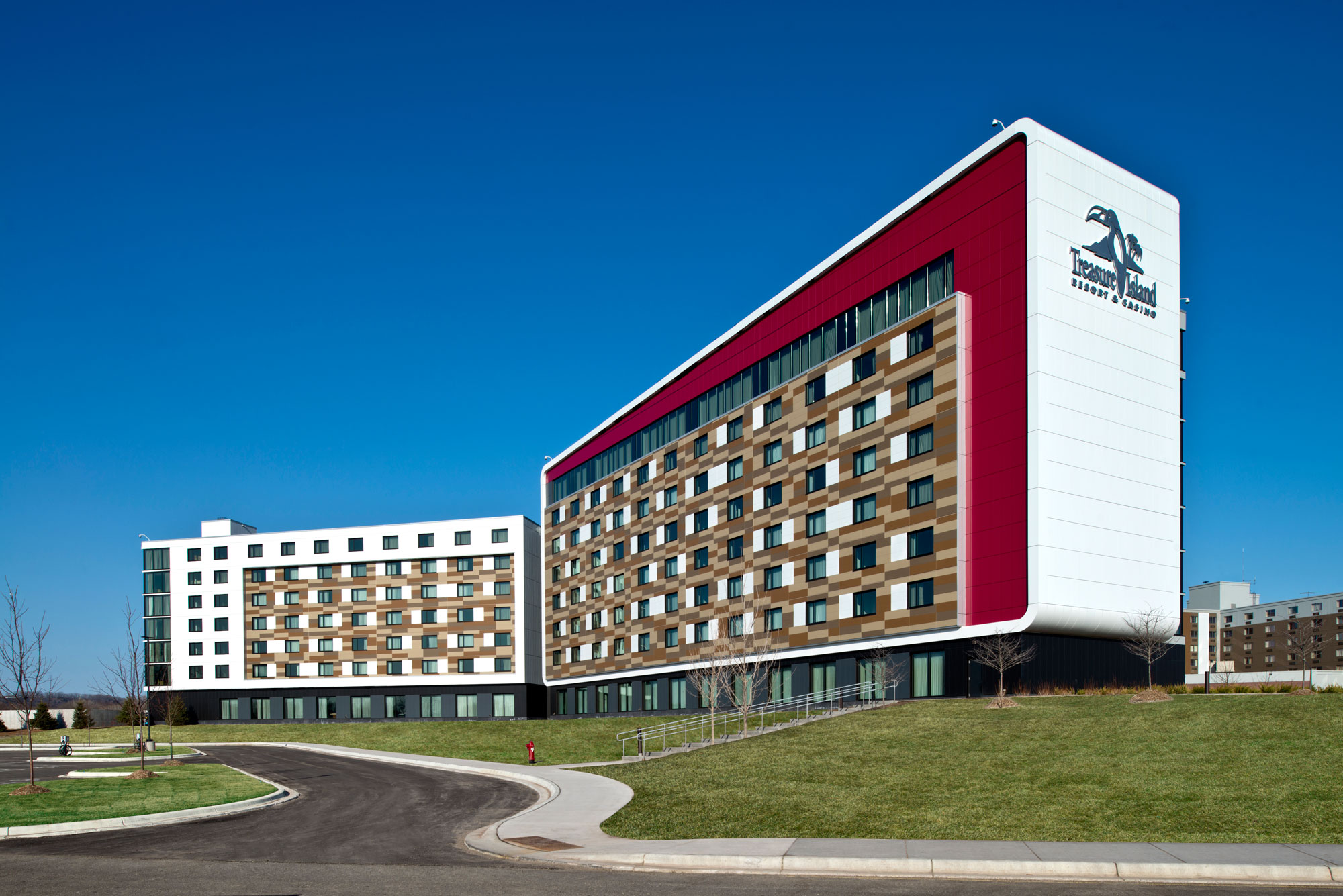 Treasure Island Resort & Casino in Welch, Minn., has undergone a series of renovations and expansions in recent years designed to provide guests with a modern resort experience in which they can enjoy upscale amenities.

With the December 2017 opening of Wolf Towers – a new 185,000 square-foot two-tower hotel expansion – guests can experience premiere accommodations in the second largest hotel in Minnesota. The 306-room Wolf Towers’ expansion brings the property total to 788 rooms. 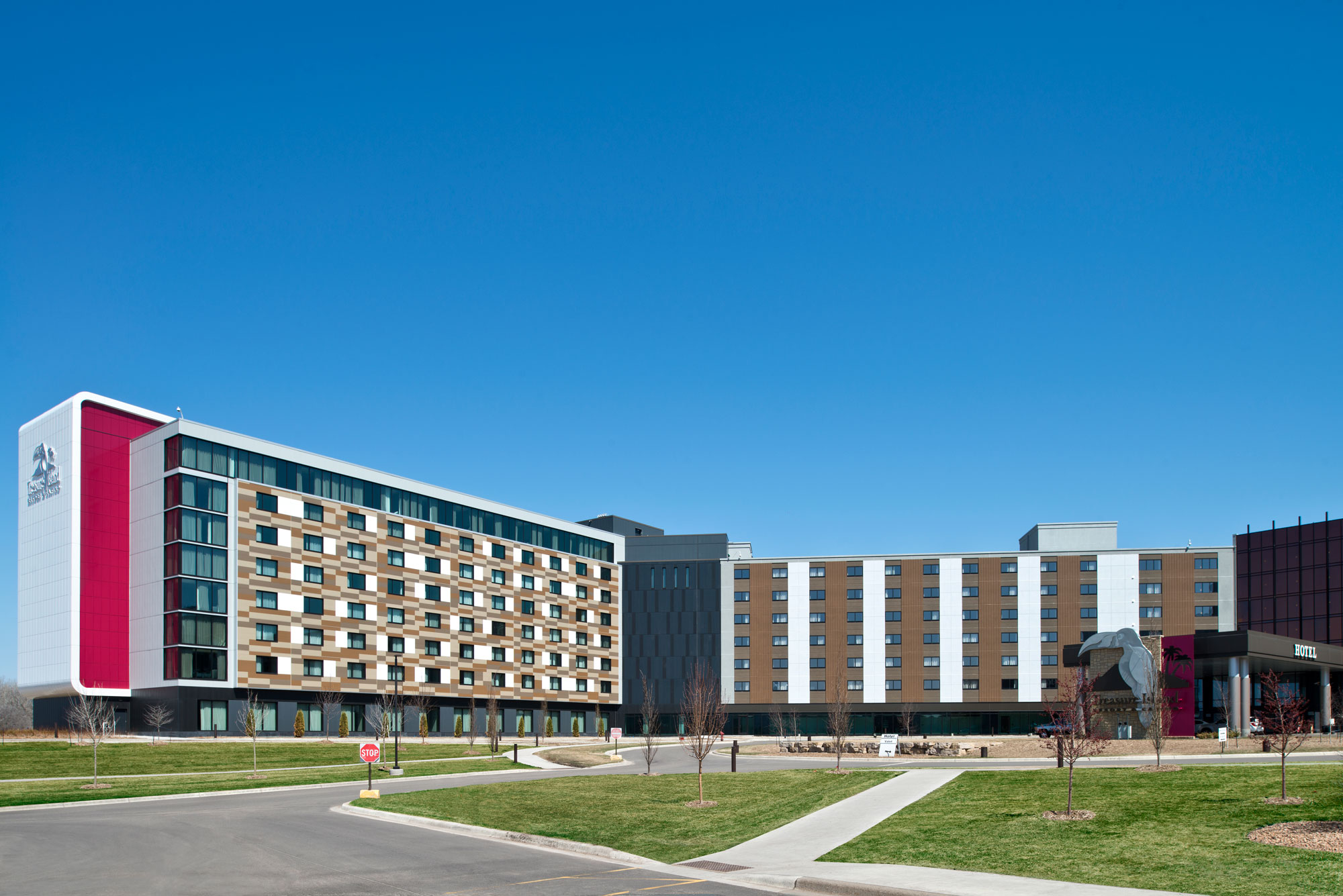 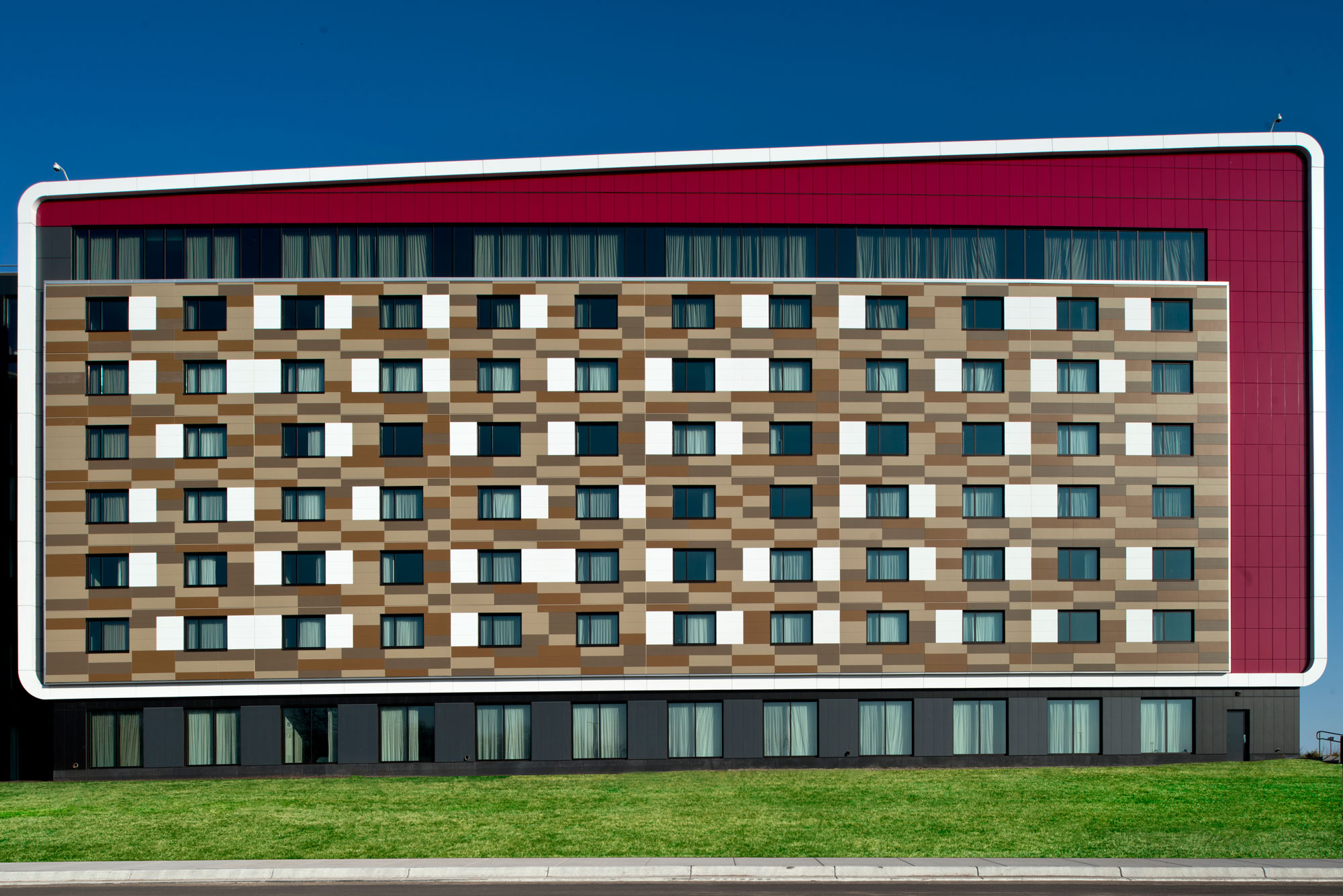 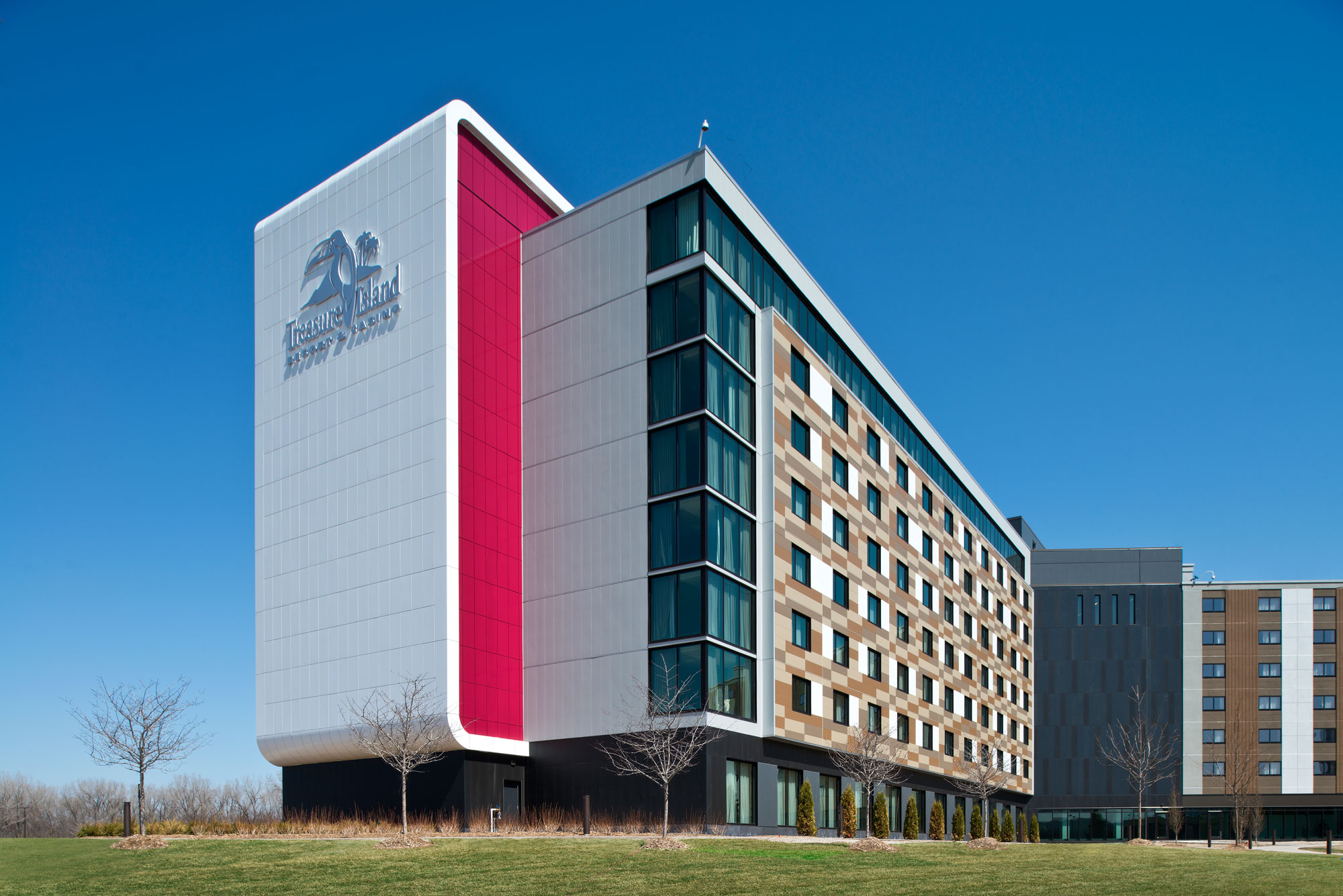 “The property’s existing façade was very tired,” said Strom. “The hotel expansion features a clean, crisp look incorporating neutrals with a splash of color. … The main portion of the hotel is clad in brown cement board combined with metal accents that include a magenta metal frame design. The striking curved prow stands out with white metal panels. We also utilized an abundance of glass. All of these design elements helped us to create a modern, timeless feel.”

Since Alucobond was introduced more than 40 years ago, architects have turned to this ingenious patented product to create some of the world’s most visually striking modern structures. Alucobond is specified by architects as high-tech metal cladding for buildings and is used to create custom design elements as well as corporate identity structures and signage. 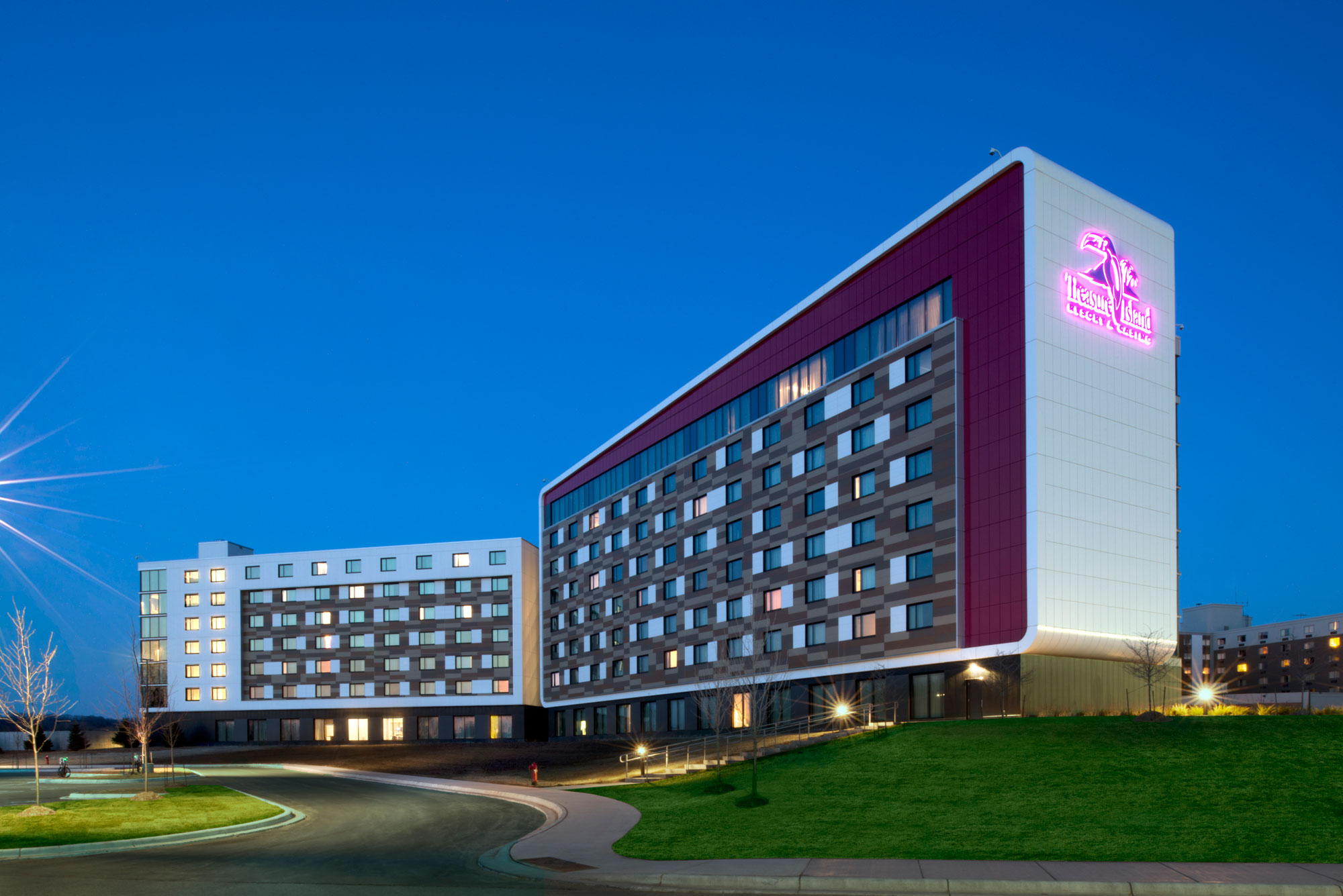 RSP Architects and Knutson Construction, headquartered in Minneapolis, have partnered for more than two decades with Treasure Island Resort & Casino, which is owned and operated by the Prairie Island Indian Community.

As described in an Indian Gaming Magazine editorial published in August 2017:
“This trusted relationship and deep understanding of the campus has allowed RSP and Knutson to push the envelope – going above and beyond what one would expect in a traditional tribal casino. Their teams have modernized spaces across the campus, introducing more open and healthier environments throughout. These projects have significantly increased the casino’s overall appeal, creating a world-class resort destination that is attracting a growing guest base.”

Located approximately 45 miles southeast of Minneapolis, design and construction of the Treasure Island Resort & Casino hotel expansion was targeted for completion prior to the city’s hosting of the 2018 Super Bowl LII on Feb. 4 at U.S. Bank Stadium.

Atomic Architectural Sheet Metal, Inc., of Vadnais Heights, Minn., began fabrication of the approximately 1,400 Alucobond PLUS panels in mid-July and completed installation with Atomic’s dry-set system in late-November 2017. The hotel expansion celebrated its opening on Dec. 5, 2017. 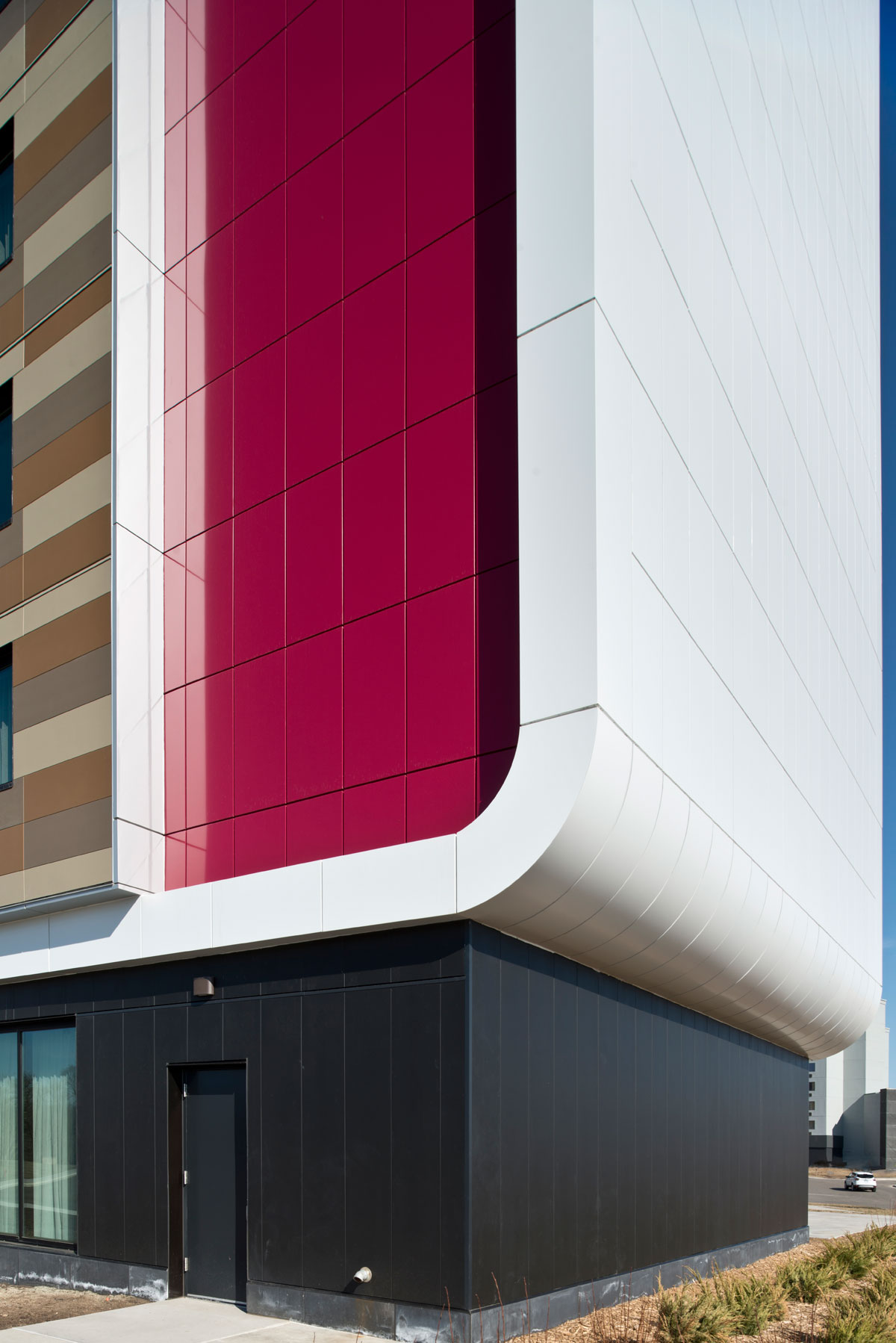 “We definitely hit the timeline,” said Rick Schmidberger, project manager, Atomic Architectural Sheet Metal. “Color wise, we hit the mark installing each Alucobond color in its own area. One of the most interesting features of the hotel is the big white radius element on the end of the building. When you’re driving up to the resort and look over the crest, the first thing you see is the big white tower. And, as you drive around it, the magenta framing really pops. We’re really proud to have been a part of this project.” 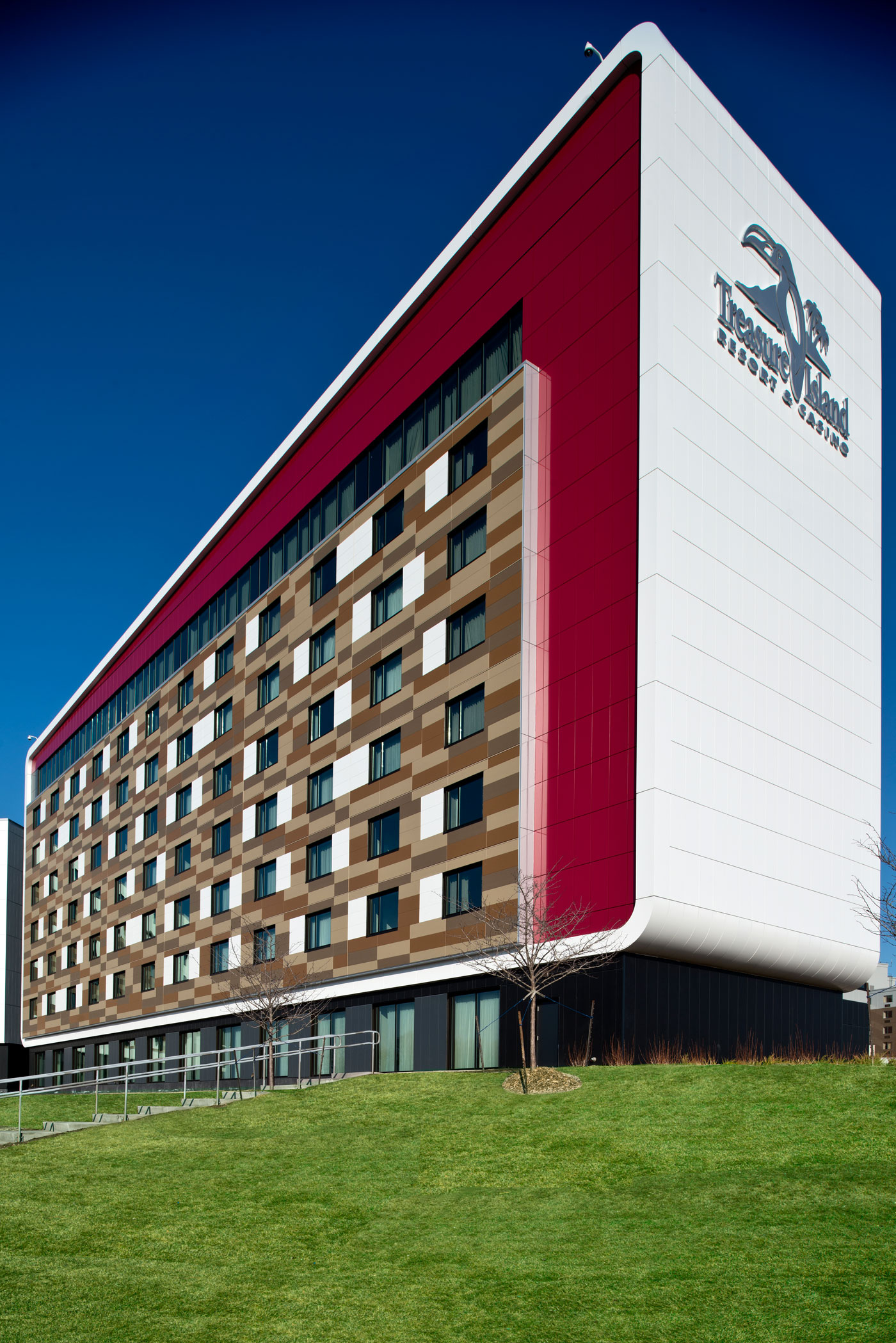 “The magenta Alucobond really stands out,” said Chris Lyles, project manager, Knutson Construction, of the unique custom magenta color that will be included as part of the resort’s standard color palette. “It adds a wow factor.”

Wolf Towers is part of an approximately $66.5-million series of renovations and expansions at Treasure Island Resort & Casino, including a new non-smoking gaming floor and an updated lobby space that leads to a new bar and lounge.

The Alucobond ACM utilized in these projects was sold by EBP, LLC, of Excelsior, Minn.

One of the most popular resort expansions was its first new project – The Lagoon – an approximately 25,000 square-foot waterpark that includes a 320-foot lazy river and slides for families, an adults-only pool and the only swim-up bar in Minnesota. The Lagoon also houses the new Wave Spa, a full-service salon and spa. Since opening in February 2016, The Lagoon significantly has increased demand for hotel rooms leading to the Wolf Towers’ expansion. 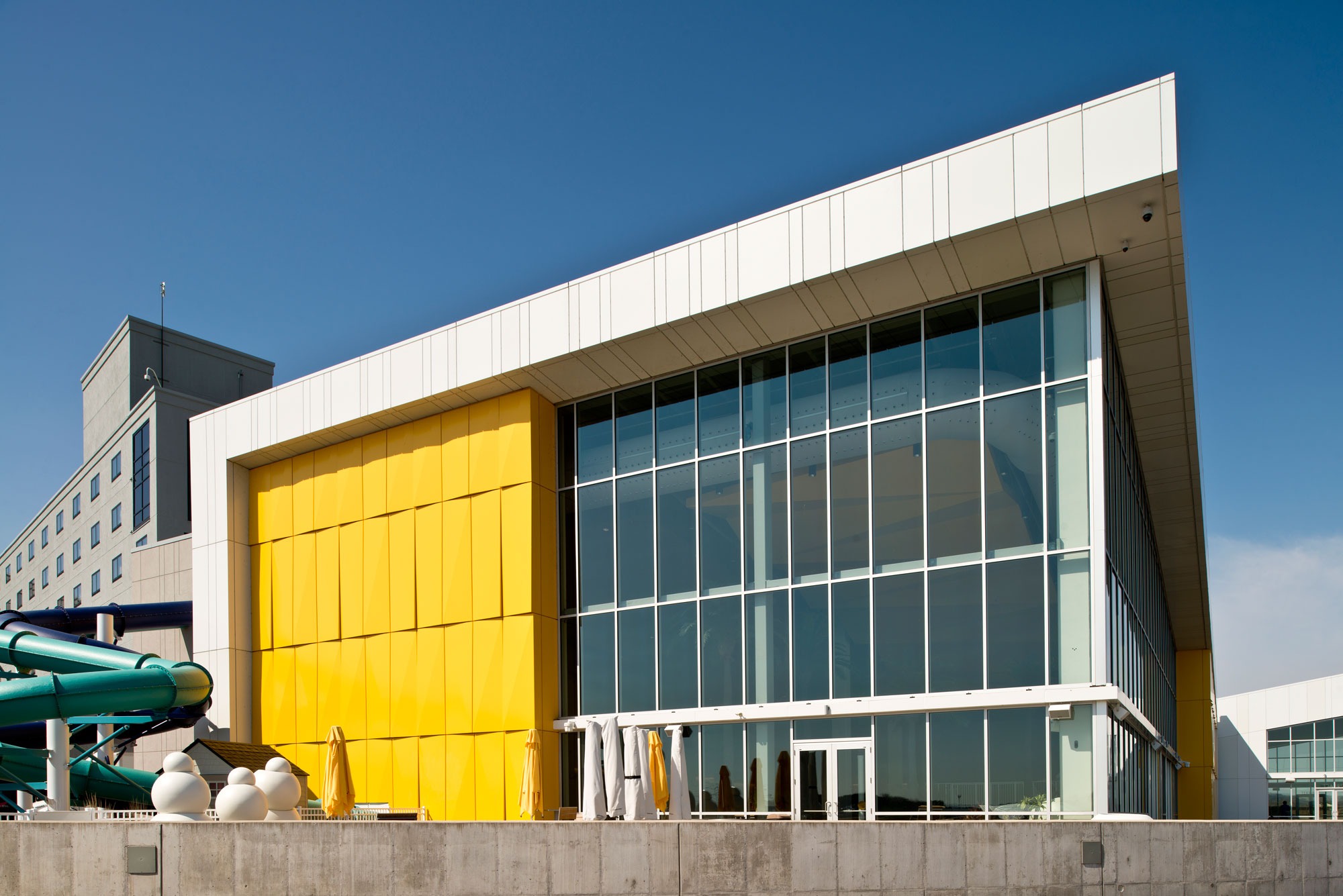 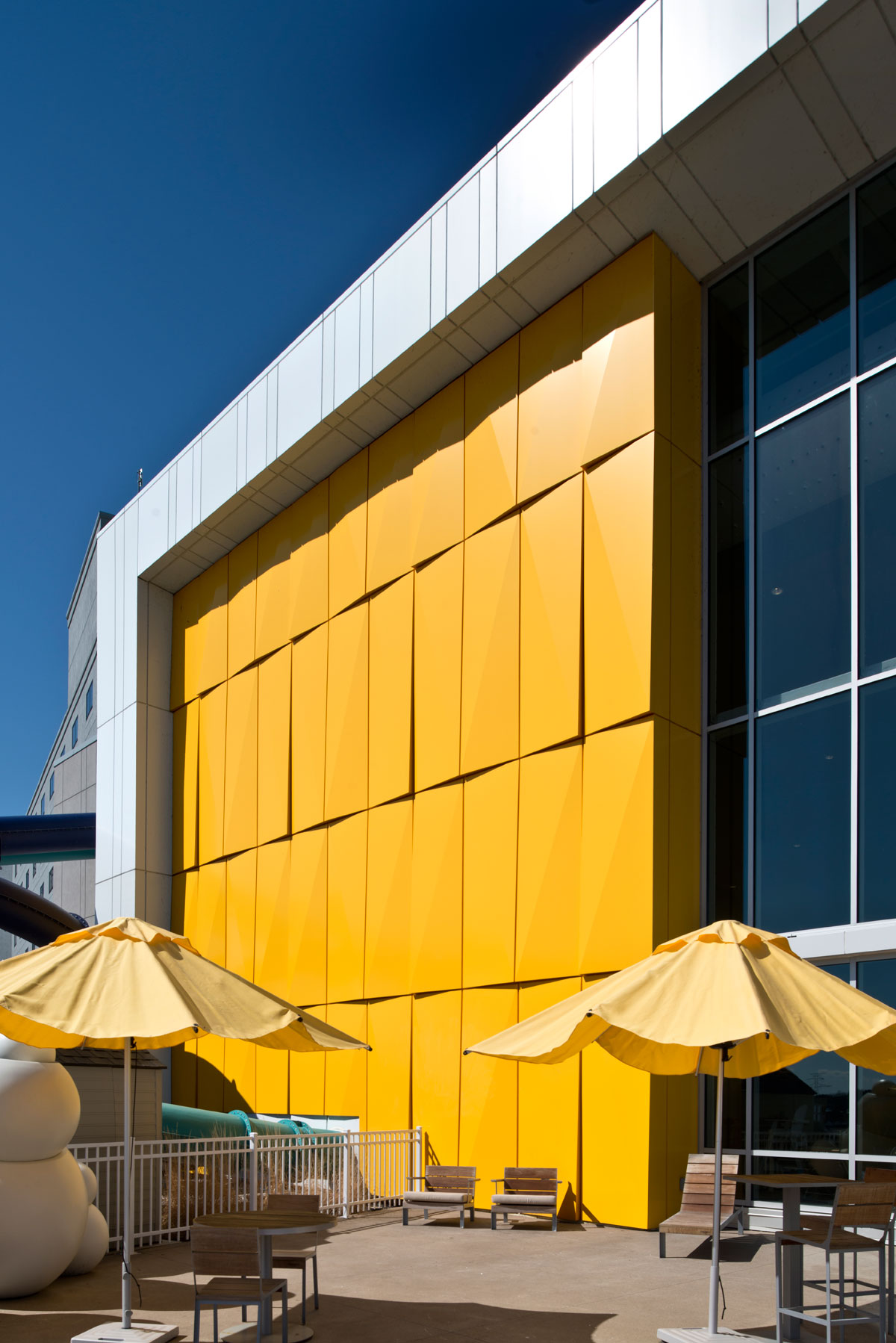 “We wanted to create a design for The Lagoon that was much more dramatic and sculptural,” said Ian Scott, LEED AP, who served as principal, RSP Architects, before his passing in December 2017. “The metal panels really helped us. The white color gave us a fresh change and clean break (from the property’s original salmon-colored facade). The idea was to have one form with two identities that would angle up to the bluffs and river. We were able to utilize one material to create two sculptural shapes.

When you look at the two colors of white panels from a certain angle, there’s a subtle change in color. The yellow metal panels are more dramatic and provide the design with a pop in color that is complimentary but brighter than the white metal panels.” 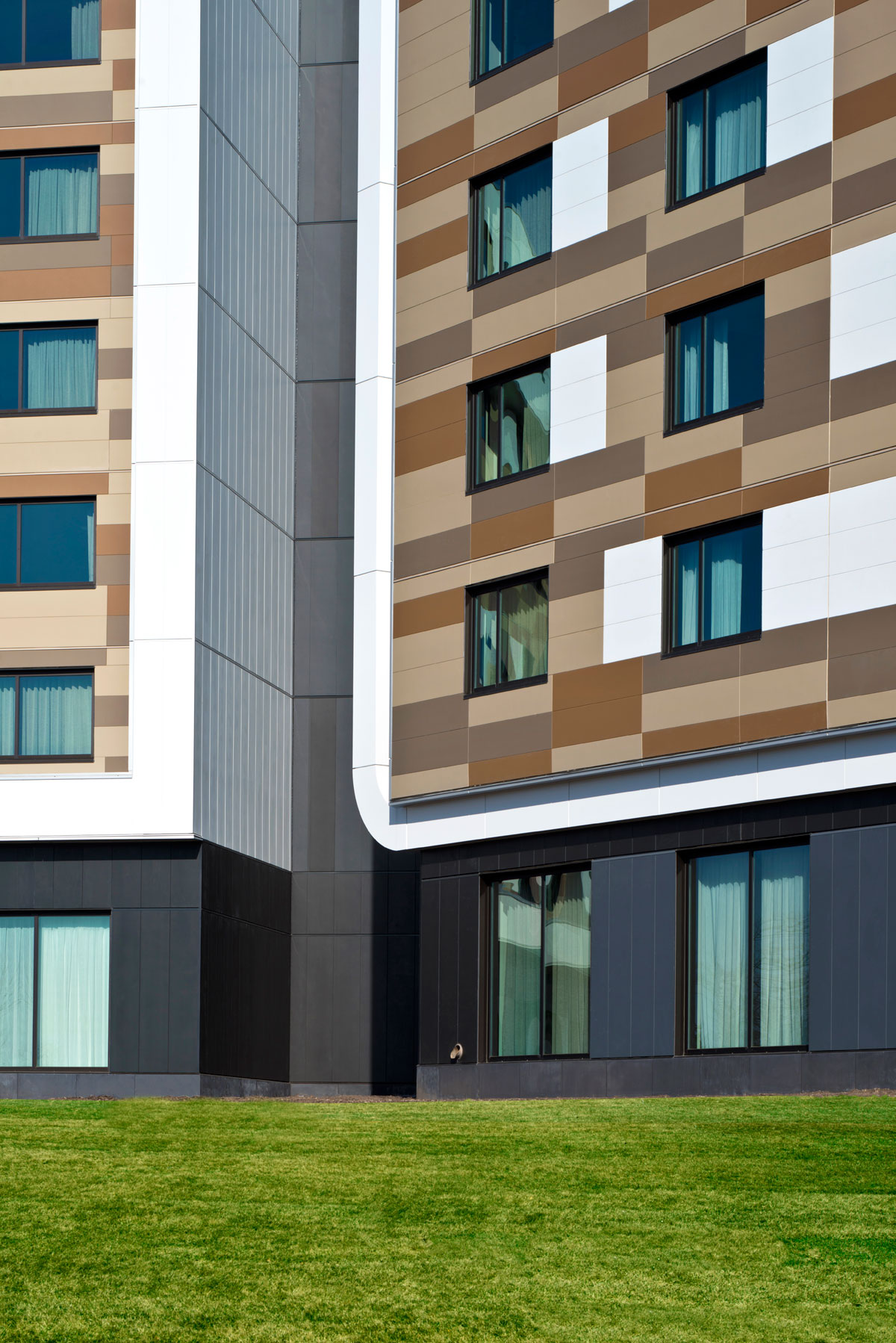 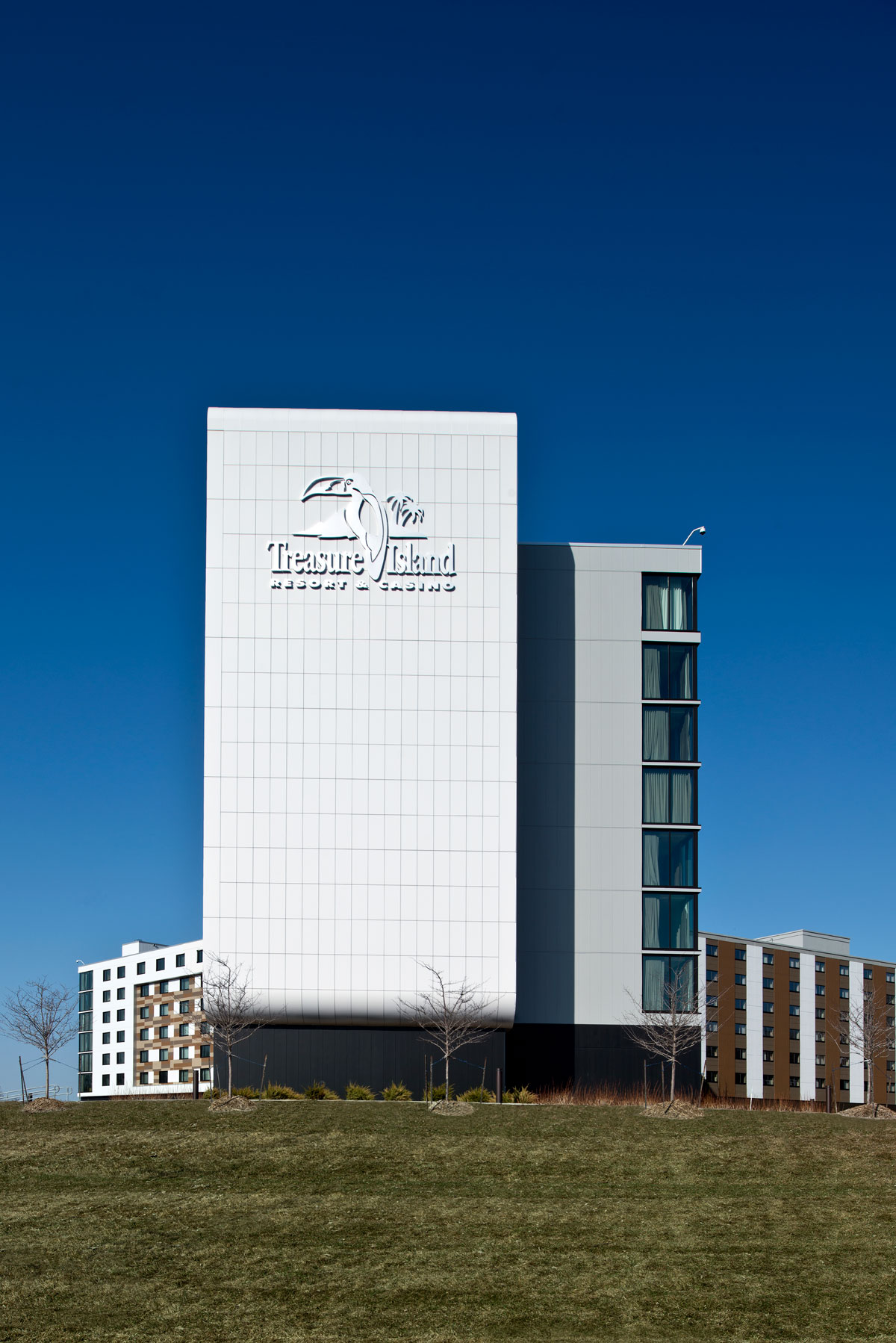 “Alucobond can be fabricated into any design you can imagine,” said Knutson Constructions’ Lyles. “This entire project was very fast-paced. The owners wanted to bring a new facet to the property and open it as soon as possible in order to attract an entirely new group of customers.”

The Lagoon quickly succeeded in attracting new guests – so much so that the resort decided to add another pool pavilion targeted to teenagers. Construction of the teen pool pavilion began in September 2016 – just seven months after The Lagoon’s opening. The 4,850 square-foot teen pool pavilion opened in May 2017.

“The teen pavilion features the same sculptural design but in another direction,” said Scott. “We had a set of mountains and just added another peak.” 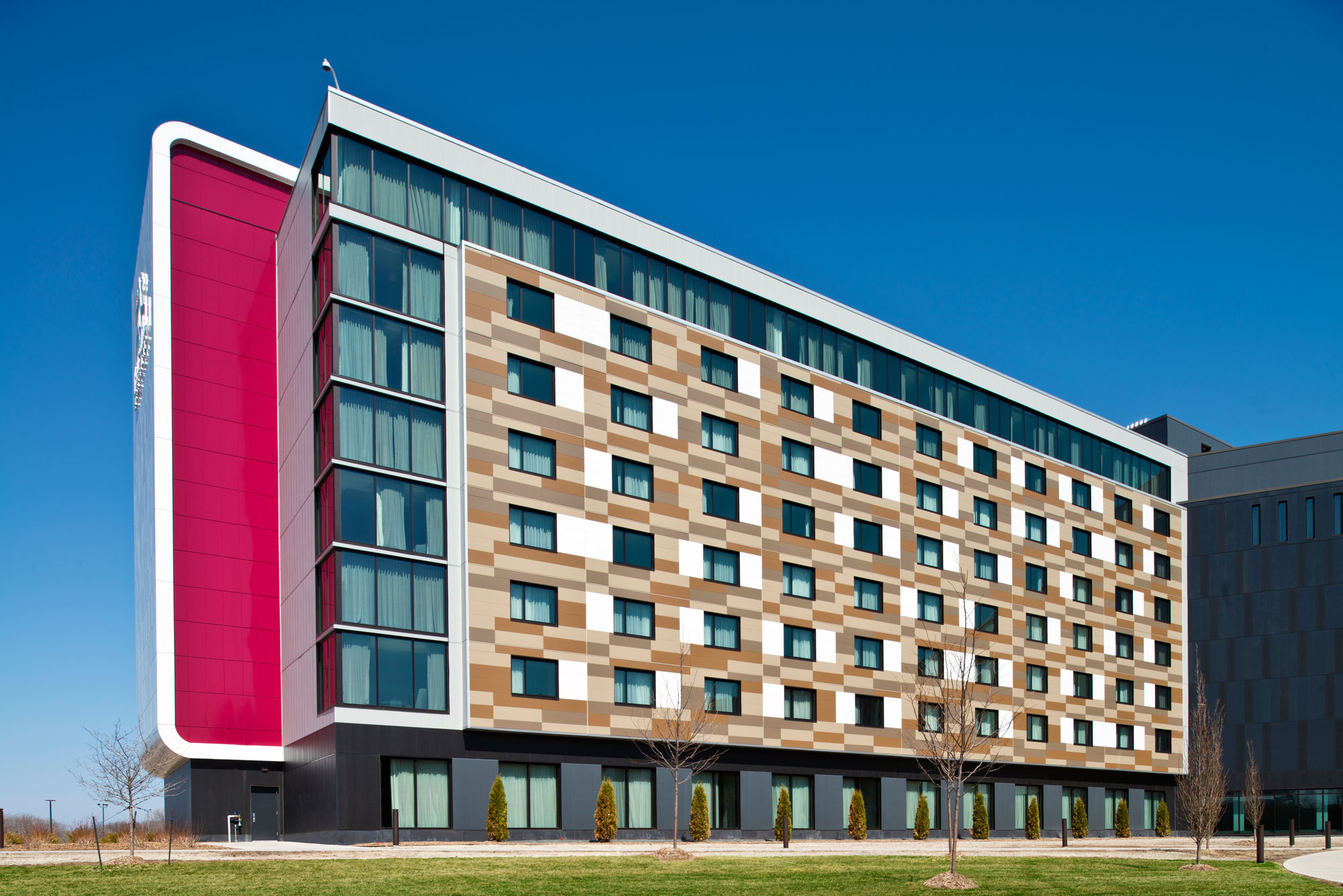 “The Alucobond was fabricated into uniquely shaped panels that included parallelograms and trapezoids,” said Charles Holley, project manager, Specialty Systems. “Our challenge was to lay out the panels to make sure they lined up correctly. We used CAD software to make sure the shop drawings were very specific about the colors to be installed. … Everyone was very happy with this project; we had only a minor punch list. The architect wanted to create a modern-looking design; Alucobond is a good reflection of that.”