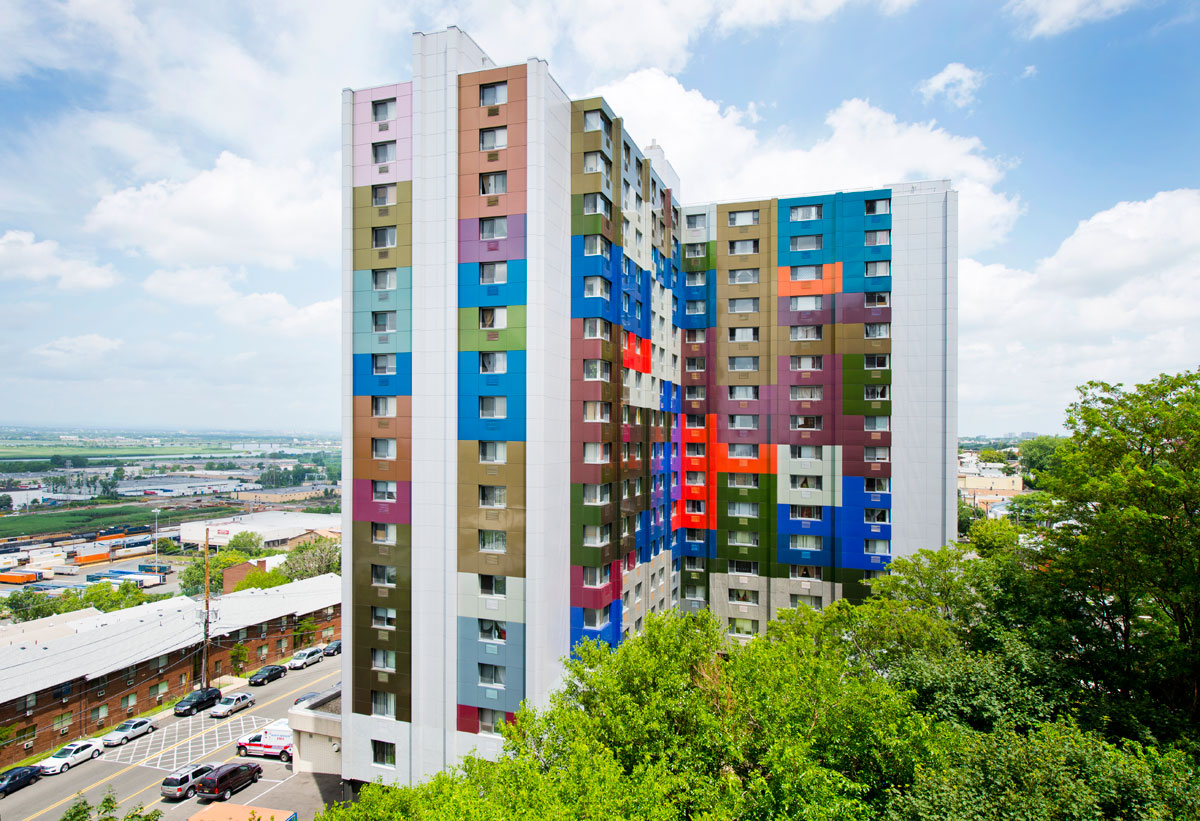 But, with an exterior retrofit completed in July 2013 that included the installation of a total of approximately 117,000 square feet of Alucobond® aluminum composite material by 3A Composites USA in nine different colors – including eight Alucobond Spectra Colors – the Cullum Tower now serves as “a beacon that can be seen from miles away,” according to Diane Peirano-Ingvaldsen, executive director, North Bergen, N.J., Housing Authority. 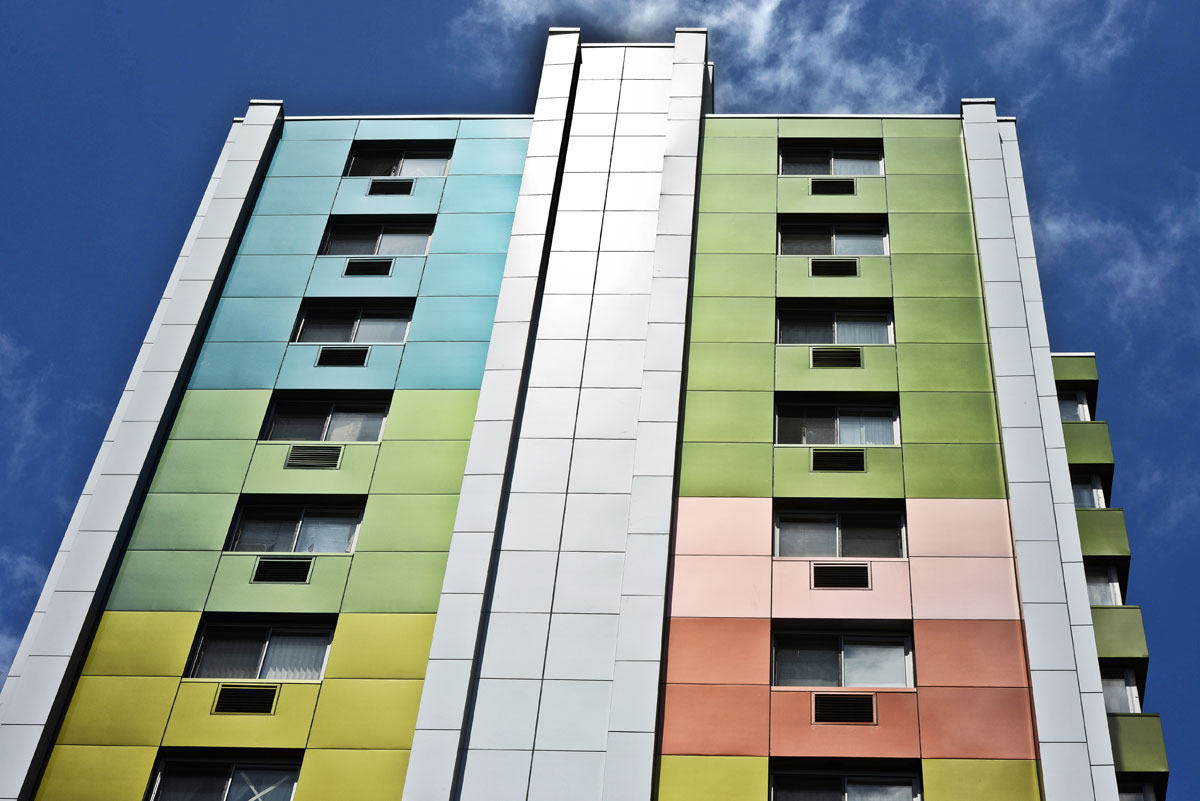 “The sun reflecting on the façade enhances both the residents’ homes and the surrounding community,” said Peirano-Ingvaldsen. “This building has definitely made a statement in the neighborhood.” Alucobond Spectra Colors allow architects to incorporate a unique, ever-changing color spectrum in the cladding of sophisticated building designs. Alucobond Spectra Colors change colors as different wavelengths of light are reflected back to the audience, depending upon the viewing angle.

Situated near the New Jersey Turnpike (Interstate Highway 95), the Cullum Tower is highly visible in the neighborhood. With a western exposure to the New Jersey Meadowlands, this hi-rise building also is particularly vulnerable to the effects of driving rain. Through the years, the building’s curtain-wall façade not only had faded but had suffered extensive wear requiring repeated repairs to the concrete columns and caulking of panels, according to Peirano-Ingvaldsen. 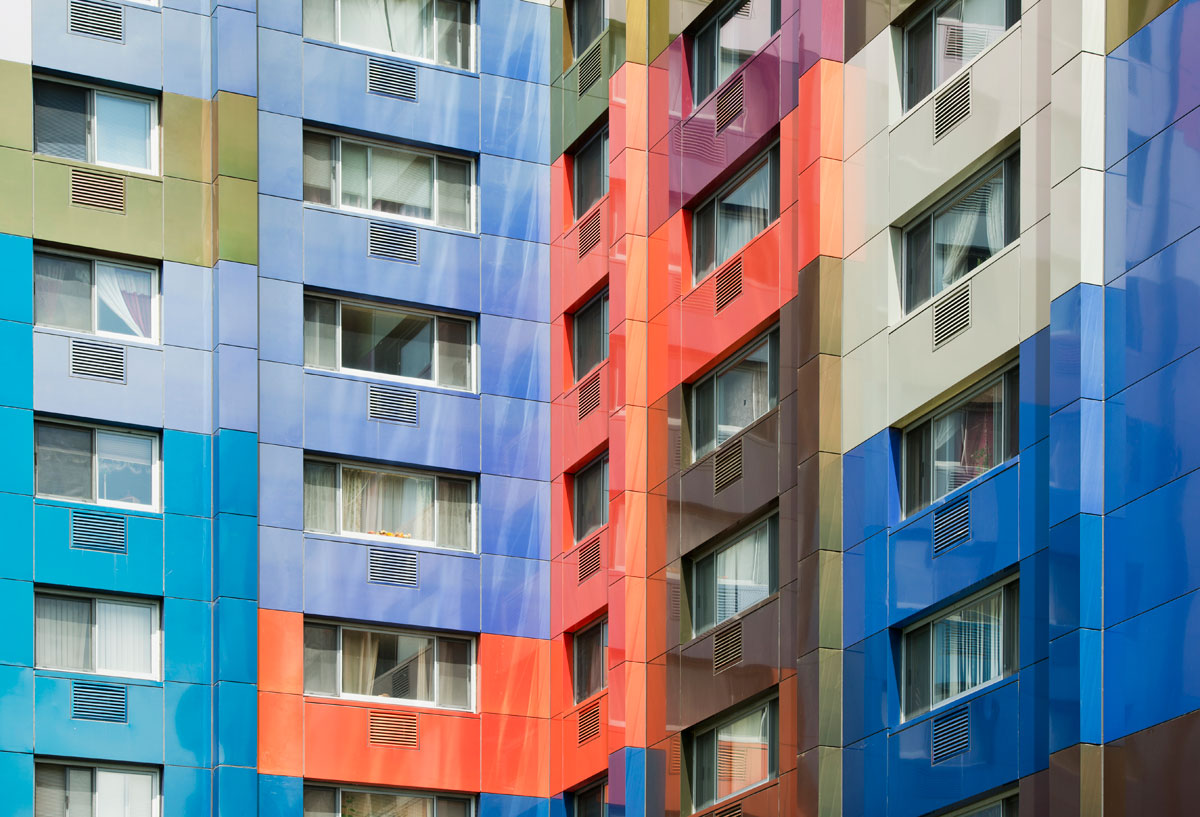 A $6.7 million two-phase exterior retrofit of the Cullum Tower was approved by the North Bergen, N.J., Housing Authority in late-2010 with three major goals, including:  improving the building’s thermal performance, eliminating air and water infiltration, and improving building aesthetics.  All goals had to be met with a minimal disturbance to residents, who would continue to live in their homes during the exterior remodel.

Following a series of collaborative design charrettes, architects at Lothrop Associates LLP, of White Plains, N.Y., developed a unique design concept to represent distinct neighborhoods in the building, according to James D. Lothrop, Jr., AIA, FASID, NCARB, CID, partner, Lothrop Associates. “We didn’t feel that a monolithic color approach was right for this residential building,” said Lothrop.  “We wanted to convey that this is a building comprised of the individual homes of unique individuals.” 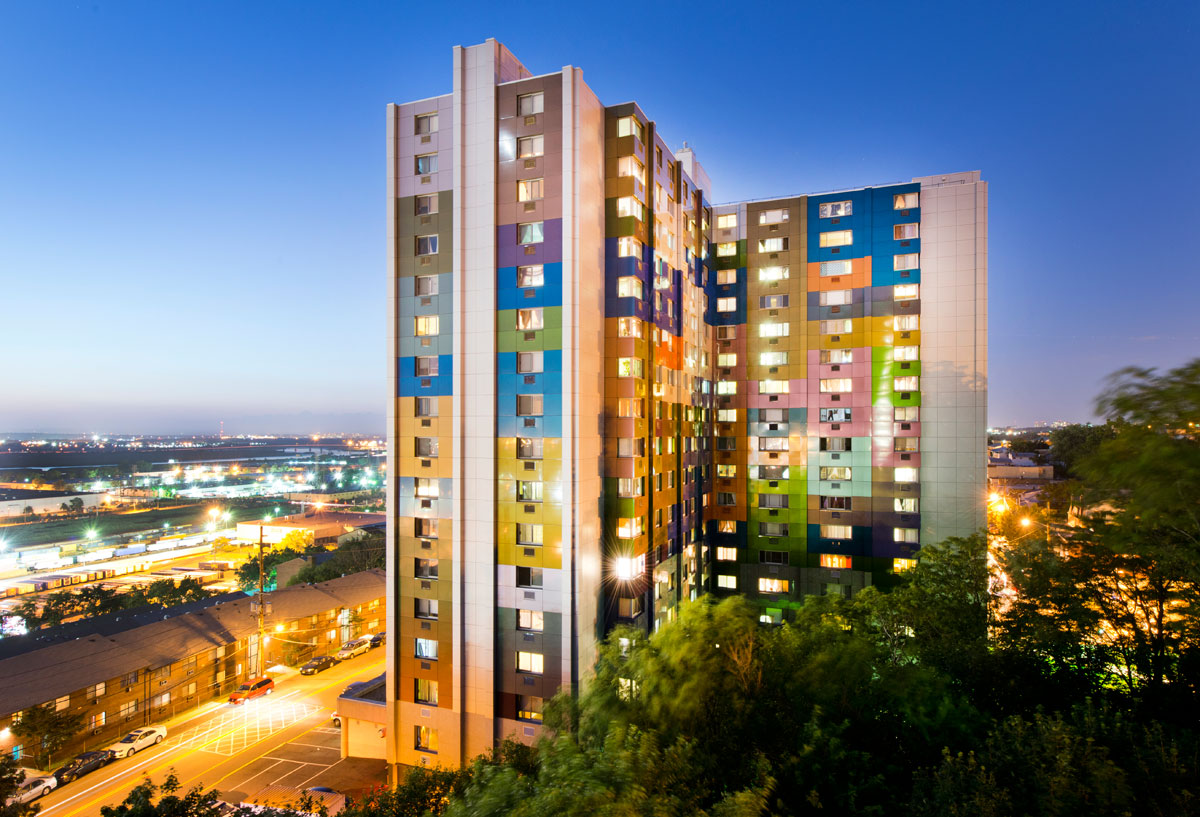 “We originally looked at the basic Alucobond colors and presented many color options to the housing authority,” said Arthur J. Seckler, III, Associate AIA, senior associate, Lothrop Associates. “Alucobond Spectra was chosen in particular because the colors were not static. This unique product gave us a stunning array of color through its color shifting properties that essentially tripled the eight basic Spectra color choices. They are not so kinetic that they’re distracting.  The color change is fairly subtle and shifts slowly, but it is this change that makes this new façade so dynamic.”

To meet housing authority goals to increase the building’s thermal performance and eliminate air and water infiltration, a weather barrier was installed over the entire building after the curtain wall had been cleaned and the concrete had been repaired. The project’s general contractor Arco Construction, Inc., of West Caldwell, N.J., wrapped the existing curtain wall and exposed concrete columns and eyebrows in W.R. Grace & Co.’s Perma-A-Barrier VPS, a vapor permeable air barrier membrane.

Arco Construction was challenged to install the Alucobond panels in a varied step pattern on the building, according to Luigi Colella, partner, Fairfield Metal, who said the company used architectural drawings to number each individual panel and produce a color layout. 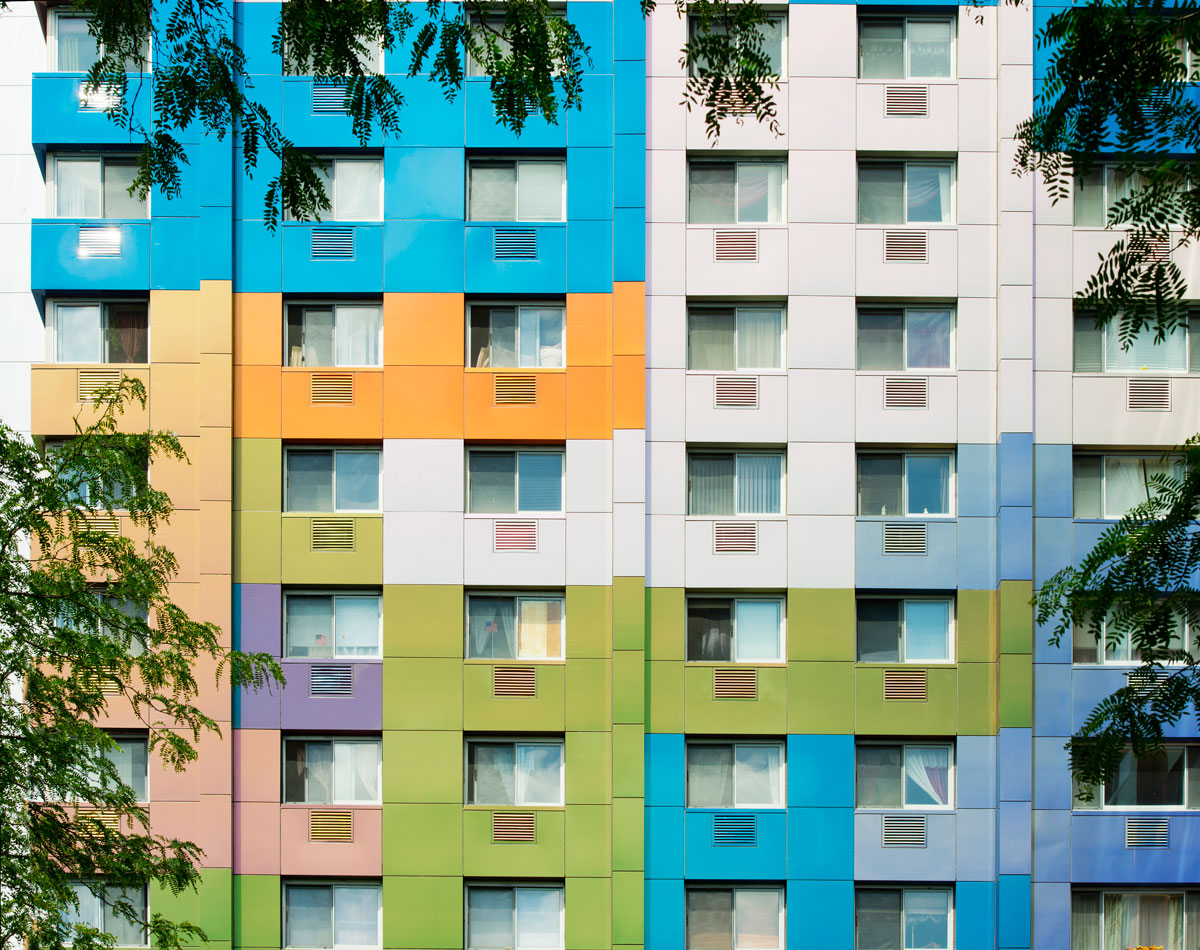 “We had to make sure that we installed the right color in the right spot,” said Colella. “We also fabricated custom column covers and louvers (the latter for installation beneath air-conditioning units) from Alucobond to match the panels.”

This retrofit also included three colors of granite stone veneer panels installed in varied heights on the first through fourth floors of the building “to mimic the one- and-two-story homes surrounding the project,” according to Seckler. 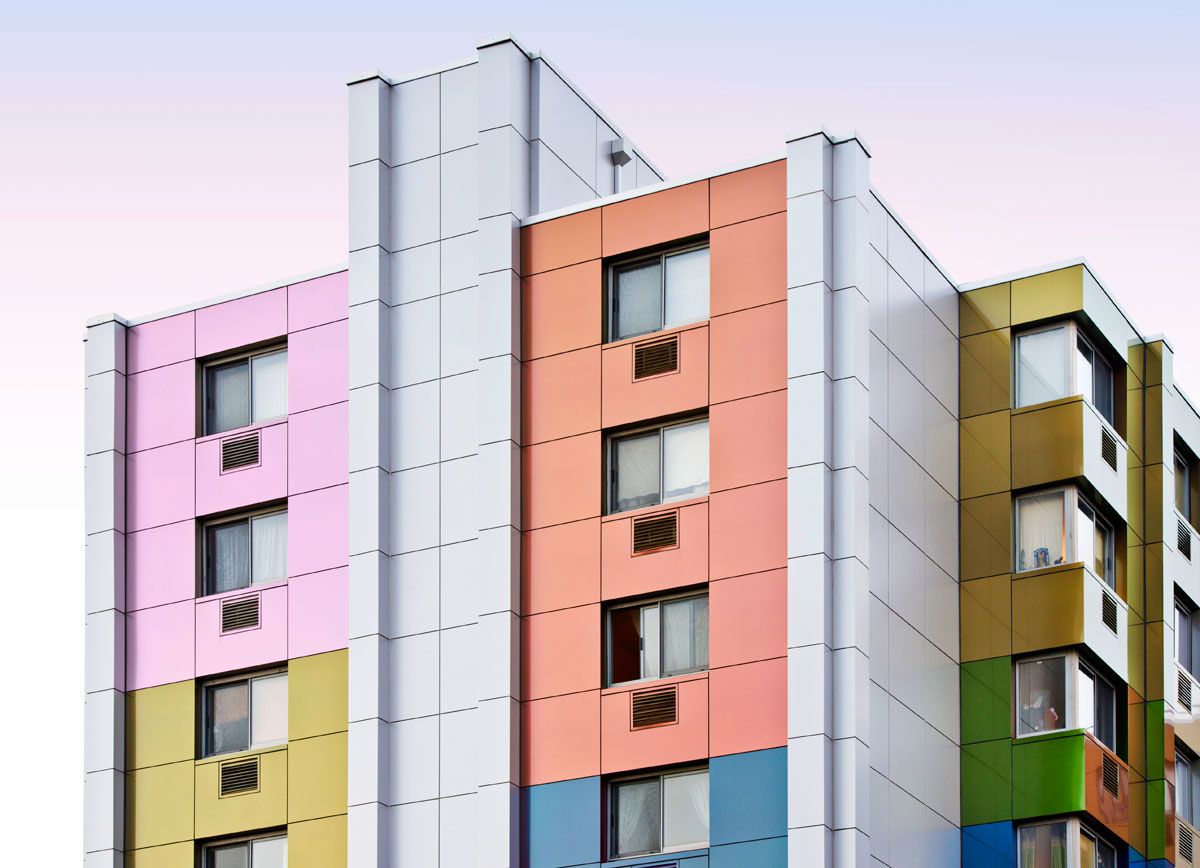 “3A Composites allowed us to order minimum runs for specific Spectra colors,” said Seckler. “The material was available when they said it would be available. They exceeded our expectations.”

“The Alucobond was specified by the architect,” said Colella. “No other manufacturer offered colors like these Spectra Colors. The Alucobond was great to fabricate and install.  We had no issues at all with this material.” Most importantly, the residents of Cullum Tower are happy with the exterior remodel of their homes.

“The residents absolutely love it,” said Seckler. “They’ve complimented us on both the building’s new look and its improved energy efficiency. … While this building was designed to provide affordable housing, there’s no reason that the elderly should not have aesthetically pleasing homes. It’s a pleasure for us to be able to provide this for them.” 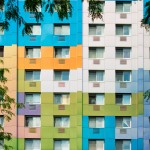 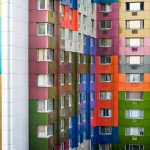 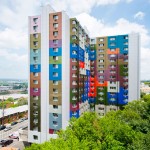 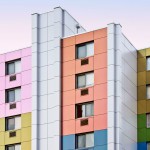 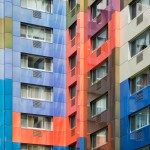 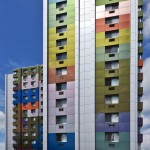 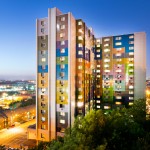 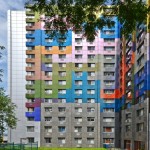 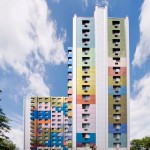 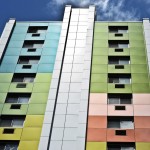