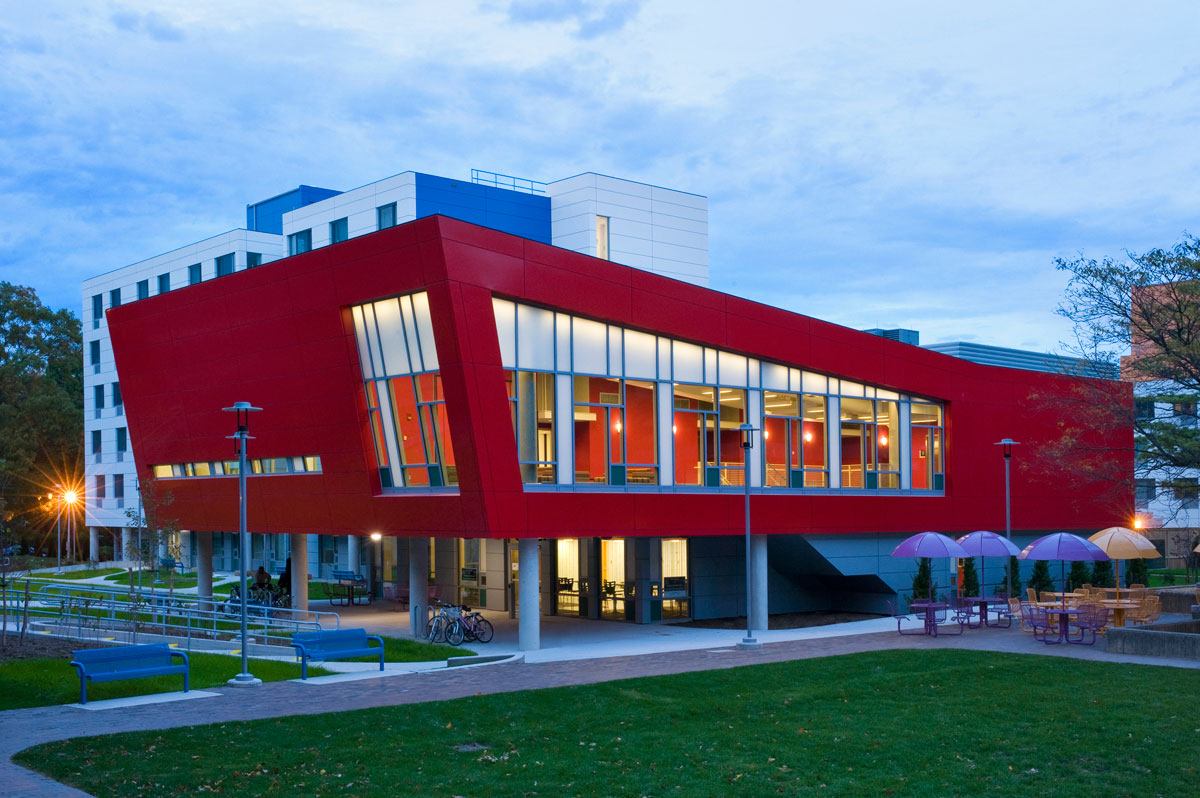 As part of The State University of New York (SUNY), Stony Brook University on Long Island’s north shore, is part of the nation’s largest and most comprehensive state university system, which web site states “ is committed to providing quality education at an affordable price.”  So, when new residence halls recently were required to meet the needs of Stony Brook’s fast-growing student population, both budget and time constraints played important roles in the buildings’ architectural design.

“The university needed buildings that could be constructed fast and inexpensively,” said F. Eric Goshow, AIA, LEED AP, partner, Goshow Architects, of New York. “We wanted to build with pre-fabricated elements to beat the clock. … Metal panel systems have been a great favorite of ours.  They establish a bright and clean look for buildings.” 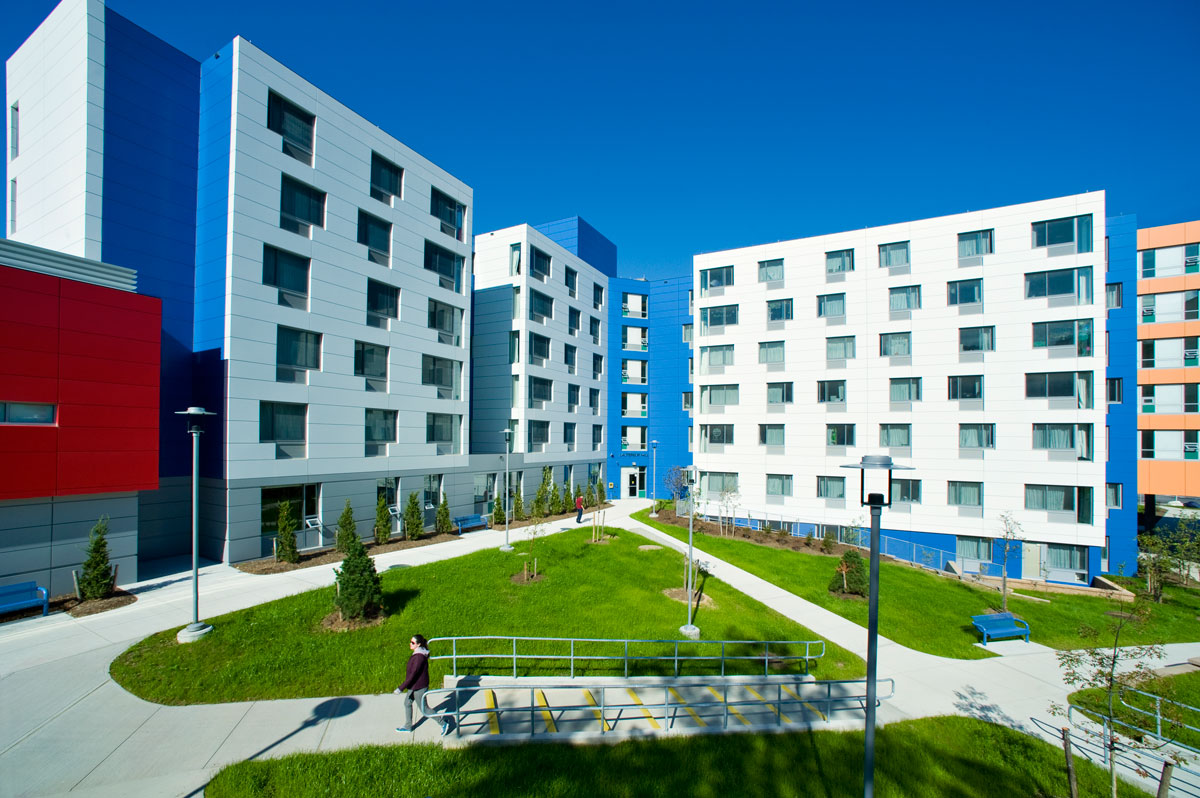 Alucobond Plus aluminum composite material (ACM) was ordered in bold colors and installed as exterior cladding on an interconnected series of three buildings totaling 173,000 square feet with varying heights of two to six stories to create architectural interest.

Included in the $56 million project are two new student residences known as the Nobel Halls and named after Nobel Prize-winners C.N. Yang and Paul Lauterbur, both former Stony Brook faculty members.  The 604-bed Nobel Halls, which welcomed their first student residents in August 2010, are divided into 104 suite-style apartments featuring a living room, a bathroom and three double bedrooms (the latter serving as single bedrooms for resident managers).   (This project was initiated in 2007 with a request for 450 beds to be completed by September 2009 but grew to a total of 604 beds and a fall 2010 semester move-in deadline.)  Adjacent to the two attached residence halls is the Center for Global Studies and Human Development, which provides multipurpose spaces and a café area. 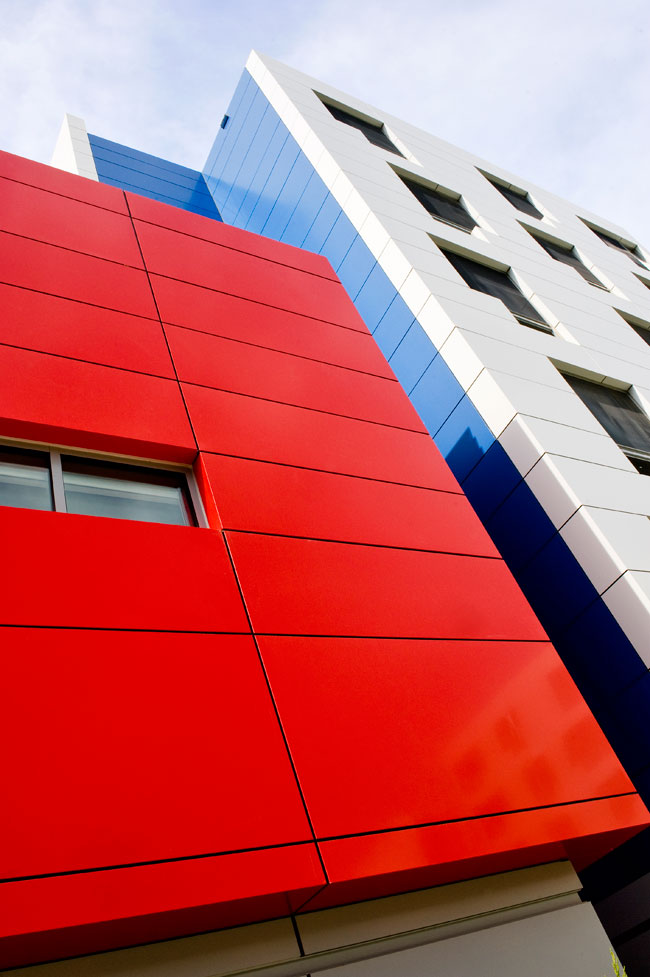 The Alucobond Plus colors were chosen to serve not only as building identifiers but as a way to brighten the campus , according to Goshow, who said his firm interviewed Stony Brook students prior to designing the buildings and learned that they thought the campus looked “too brown” in the wintertime.

“We believe in the use of color,” said Goshow. “Color helps to brighten the whole experience.  Additionally, we designed the buildings with lots of windows and translucent glazing to provide the interiors with natural daylight and so the buildings could serve as way-finding lanterns at night.”

The contemporary Alucobond Plus material in bold colors helps to make these buildings stand out on the 1,000-acre campus, most of which was built in the 1960s and ’70s.  In particular, nearby residence halls were designed in the “brutalist” architectural style featuring poured concrete and brick as well as pitched roofing.  Initially, university officials requested that the new residence halls match that style.

“We convinced the university that they couldn’t build traditionally; bricks are labor-intensive and not cost-effective,” said Goshow. “We also wanted to focus on building for the 21st century.  It was the perfect time because we had a new university president (Samuel L. Stanley Jr., M.D.) coming on board.  And, we wanted to reflect Stony Brook’s academic programs, which have huge emphases on science and technology as well as sustainability.  We wanted to distinguish ourselves from the old and look toward the future with confidence.”

This building project is registered under the U.S. Green Building Council’s Leadership in Energy and Environmental Design (LEED) program.  At a minimum, it was required to achieve LEED Silver certification but instead was designed and currently is being submitted for LEED Gold certification, according to Amanda Langweil, AIA, LEED AP BD+C, CSI, CDT, director of sustainability, Goshow Architects, who said installation of the Alucobond backed by insulation outboard of studs played an important role in meeting guidelines for a higher level of LEED certification.

“We needed to increase R-values when building with load-bearing steel-studded walls,” said Langweil.  “We started by looking at traditional batt insulation but the R-values were reduced up to 60 percent due to thermal bridging.  So, we decided to install rigid insulation outboard of the studs to improve the exterior envelope.” 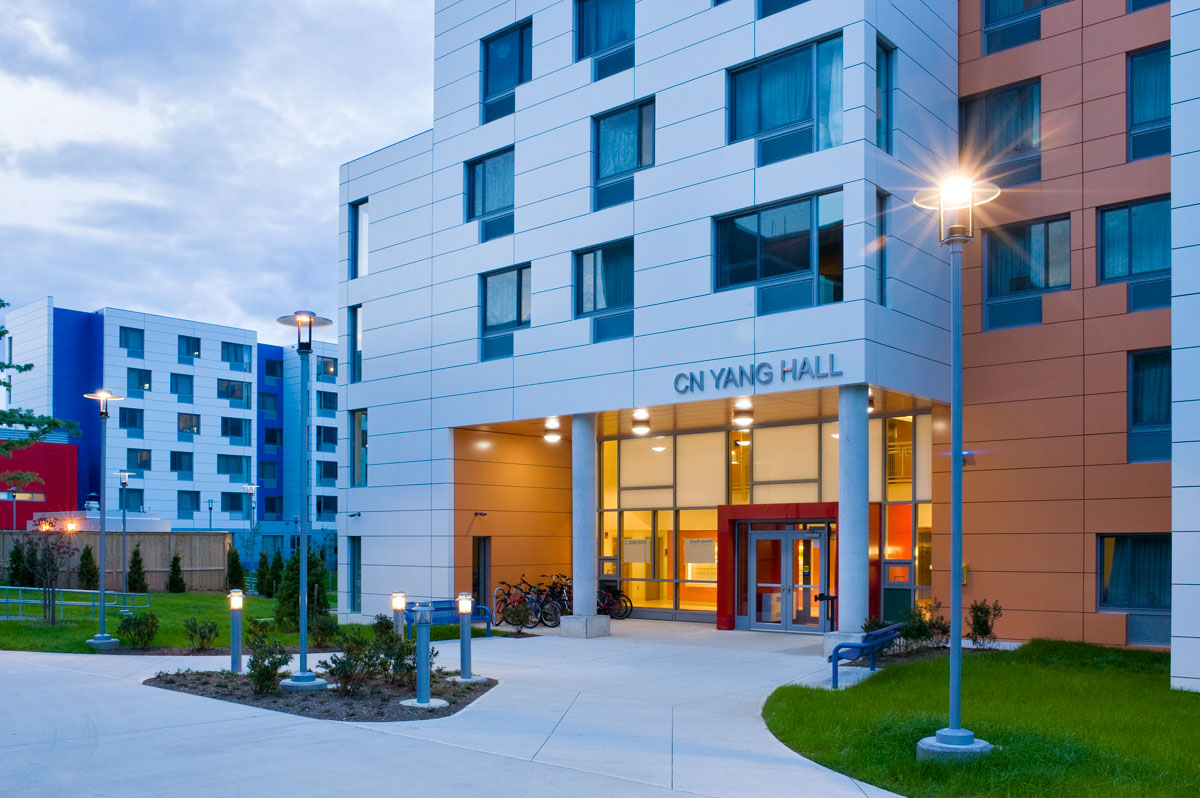 In test simulations conducted by Amityville, N.Y.-based Kenneth J. Herman, Inc. – a full-service subcontractor specializing in the design, fabrication and installation of exterior metal panel wall systems – approximate R-values of 20 or higher were achieved when the metal wall panel system was installed with the insulation placed outside the steel studs, according to Mike Dell’Olio, vice president, Kenneth J. Herman, Inc.

“This project was unique in that the thermal insulation was mounted to the exterior of the metal studs rather than in between the studs to achieve better thermal efficiency,” according to Dell’Olio, who said the Alucobond Plus panels were installed in a rout-and- return dry-seal curtain-wall system that is fully guttered and weeped.

Another unique challenge of this project involved creating the geometric shapes included in the architectural design of the Center for Global Studies and Human Development, which was clad in Alucobond Plus in the Flag Red color.

“The walls of this center are inward sloping on certain elevations and transition to vertical; and, there are numerous window return conditions on the entire project,” said Dell’Olio “This design required unique panel shapes that could only be accomplished with Alucobond.  We proposed Alucobond for this project in order to achieve this architectural look without the need for exposed applied trim.”

In order to meet a fast-approaching move-in deadline for students, Kenneth J. Herman, Inc., which is located in close proximity to Stony Brook University, fabricated the Alucobond panels as they were being installed.

“We made panels every day and shipped them out,” said Dell’Olio. J. Kokolakis Contracting, Inc., of Bohemia, N.Y., served as general contractor for this project. 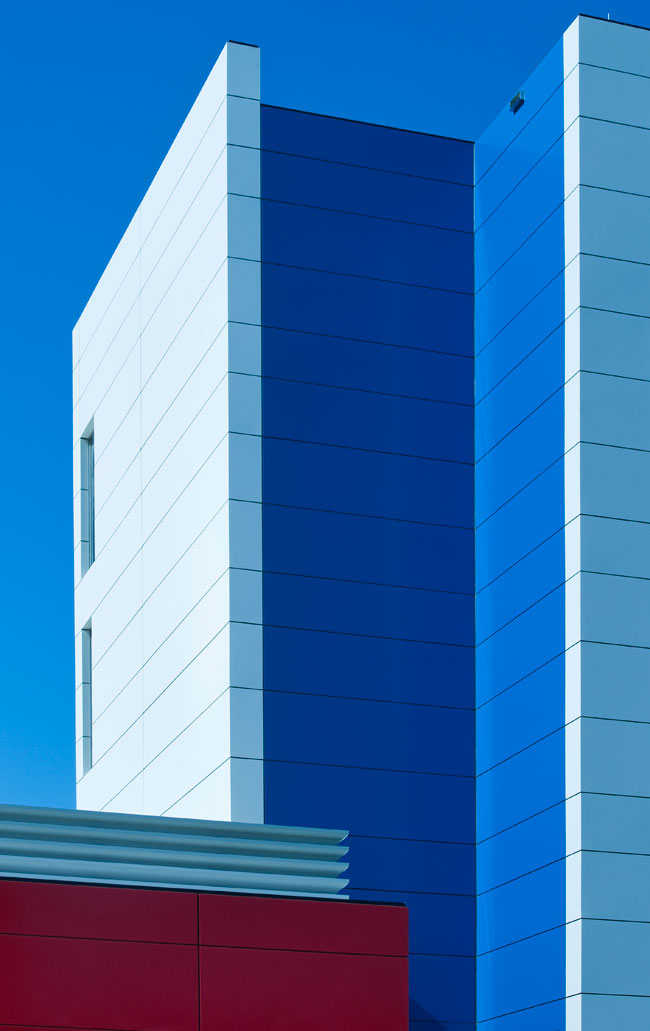 “The project’s timing, creating a new look and beating the budget were key areas of focus for both our architectural and construction teams,” said Goshow.  “Kenneth J. Hermann was brilliant in figuring out crucial details in constructing our architectural design.  Utilizing the Alucobond system was a no-brainer.”

The finished buildings have been well-received by the university population – especially by the student residents.

They’ve certainly attracted a lot of attention on campus with the color combinations and different building sections. The building exteriors are beautiful.